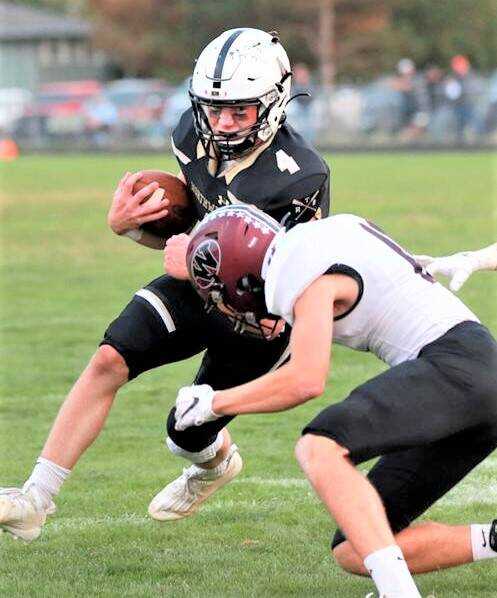 *Sam Hartman-Grand Island Northwest - Did it all in a heartbreaking 43-36 loss to Scottsbluff. One of the finest Dual-Threat QBs in the state, Hartman rushed for 174 yards and a touchdown on 32 carries and still had time to complete 12 passes for another 261 yards and an additional 4 scores. I’ll do the math. That’s 435 yards by Sam Hartman alone in a back and forth game that takes it all out of even the best athletes on the field.

*Riley Grieser, Brett Mahony-Kearney Catholic - 6-2, 190 pound senior Riley Grieser shredded the Minden defense for 244 yards and 2 touchdowns on 19 carries in the Stars 39-8 victory over the Whippets. Grieser’s two long distance scoring sprints covered 54 and 59 yards. Meanwhile, classmate Brett Mahony was killing the Whippets through the air by completing 8 of 11 passes for 162 and 4 touchdowns in the game.

I think Mahony has the hang of it, don’t you?

On defense, Preston Ames, the 6-0, 185 pound senior free safety, had a big night, picking off a pair of Kearney passes, recovering a fumble and making 4 solo tackles. The defensive leader? Why of course, it was Jayden Roberts with his 9 tackles.

*Brady Cook-Fullerton - Junior All-State candidate rambled for 195 yards on 18 carries with touchdown runs of 3, 41, 29 and 13 yards in the Warriors 70-42 win over High Plains. After 5 games, Brady Cook has rushed for 754 yards and 15 TDs, caught 18 passes for 149 yards and 2 more scores, made 50 stops and recovered a fumble on defense, returned a fumble and kick-off for a touchdown and compiled 1,146 All-Purpose yards.

I’ll be heading to Fullerton Thursday to tape one of my EndZone Online shows for the Grand Island Independent so maybe we can coax Brady into having a few words with us.

QB Quade Myers, who surpassed the 5,000 yard Career Rushing mark earlier this season, added 125 yards on 12 totes and touchdowns runs of 25 and 17 yards in the romp. The remarkable Quade Myers is just 134 yards away from his 4TH 1000 yard rushing season. Just mind-boggling.

*Gage Racek, Dylan Hurlburt-Ord - If one of these boys doesn’t get you on a long touchdown run, the other one will. In Ord’s 63-14 win over Doniphan-Trumbull, senior Gage Racek blazed for 219 yards on 21 carries and 4 touchdowns. Sophomore quarterback Dylan Hurlburt ran the ball just 6 times for 69 yards, but two of those carries went for touchdowns.

When you think of the talent the 2020 State C-2 champion Ord Chants lost through graduation, it is incredible what this team is doing, especially Dylan Hurlburt and Gage Racek, who played in the shadows of All-State sensations QB Zach Smith and all-world RB Tommy Stevens.

*Jaxon Wayand, Eli Vondra-Milford - I’ll guarantee you without a shadow of a doubt that Nebraska City never wants to see these two guys again on a football field. Eagles Quarterback Jaxon Weyand, a Crete transfer, rambled for 251 yards on just 11 carries (22.8 per) and touchdown scampers of 38, 24 and 75 yards in Milford’s 56-28 win over the Pioneers.

*Sebastien Boyle, Braeden Stull-Scottsbluff - Boyle, the speedy sophomore who seemed to appear out of nowhere this season, rambled for 169 yards and 3 touchdowns on 23 carries in the Bearcats 43-36 win over Northwest in Grand Island last Friday. And it was Boyle who broke loose for the winning 67 yard TD run with 2:13 left in the game against the Vikings.

Junior quarterback Braeden Stull, a Bridgeport transfer who was All-District as a sophomore there, hit 6 of 9 passes for 152 yards and added 103 rushing yards and 3 touchdowns on 22 carries in the game. Boyle’s TD scampers covered 24, 3 and 67 yards while Stull got in the end zone from 11, 1 and 43 yards away.

The Bearcats ended up gouging the Northwest defense with 337 rushing yards in the contest.

*Evan Haisch-Laurel-Concord-Coleridge - Big, strong, and fast, Evan Haisch is just a nightmare to tackle and he proved that to be the case once again in LCC ‘s 44-13 win over Hartington-Newcastle. Haisch exploded for 180 yards and a pair of scores (42, 4 yards) on 28 carries in the win. He also dished out 8 solo, Exederin headache tackles on defense for the Bears.

Evan Haisch, also an All-State candidate on the basketball floor, has compiled a 5 game rushing total of 828 yards with 11 TDs for the 4-1 Bears. He also has 26 tackles on defense.

Haisch is a tough runner, and if you recall, the dude had 1,823 yards/32 TDs a year ago and is currently just 18 yards away from hitting the 3,000 Career rushing yards mark this season.

*Dane Jacobsen-Ashland-Greenwood - Ladies and Gentlemen, introducing Dane Jacobsen, your starting quarterback for the Class C-1, #1 Ashland-Greenwood Bluejays, and he would be a Sophomore! In a 42-7 win over Raymond Central, Jacobsen completed 11 of 16 aerials for 196 yards and scoring tosses to 12 and 39 yards to Logan Sobota and a 53 yard bomb to Evan Shepard.

*Andy Maloley-Pawnee City - Carried the ball just 9 times in the Indians 77-29 win over Meridian, but still amassed 260 yards and long distance touchdown dashes of 30, 33, 65 and 70 yards, all coming in the first half.

*Christian Meneses-Plattsmouth - It was all in a night’s work for the fabulous Meneses in the Blue Devils 55-0 trouncing of Crete. The Plattsmouth star carried 16 times for 156 yards and 5 touchdowns in the win, which increased his 2021, 5 game rushing total to 1,180 yards. Meneses, who ran for 1,740 yards a year ago, has gained 3,125 yards in 25 career games.

Plattsmouth, who is currently rated #3 in Class B appears ready to make another deep playoff run after advancing all the way to the Class B semifinals a year ago. This is a very good football team that can flat out beat you down all the way through those Friday Night Lights games, friends.

*Jakub Jordan-Falls City Sacred Heart - Senior QB came up big in the Irish 30-26 win over rugged Johnson-Brock. Jordan rushed for 145 yards and reached the end zone with runs of 1, 15, 1 and 4 yards. Sacred Heart is currently ranked 4th in Class D-2.

*Tanner Frahm-Plainview - Another outstanding performance by Frahm, only to fall short in the Pirates 82-62 loss to Wakefield. All the kid did was complete 32 of 48 passes for 419 yards and SIX touchdowns , but still no cigar.

Good Golly Miss Molly, the 5-9, 165 pound junior is leading Class D-1 with 1,463 yards passing with 19 TDs and just 4 INTs and STILL Plainview is sitting at 0-5 right now. And who does Plainview play this week? 4-1 Laurel-Concord-Coleridge, then 5-0 Lutheran High NE, and finally, finally……..0-5 Elkhorn Valley.

Ya just gotta feel for Tanner Frahm, who is a very fine quarterback.

Kaps is really a fine Dual-Threat QB for future Hall of Fame Coach Steve Colfack, who has won 139 games during his career. Kaps, through five games, has 531 yards passing (3 TDs) and 435 yards rushing with 9 TDs.

Keep an eye on this Bertrand team, who gave Dundy County/Stratton a game before falling, 28-20.