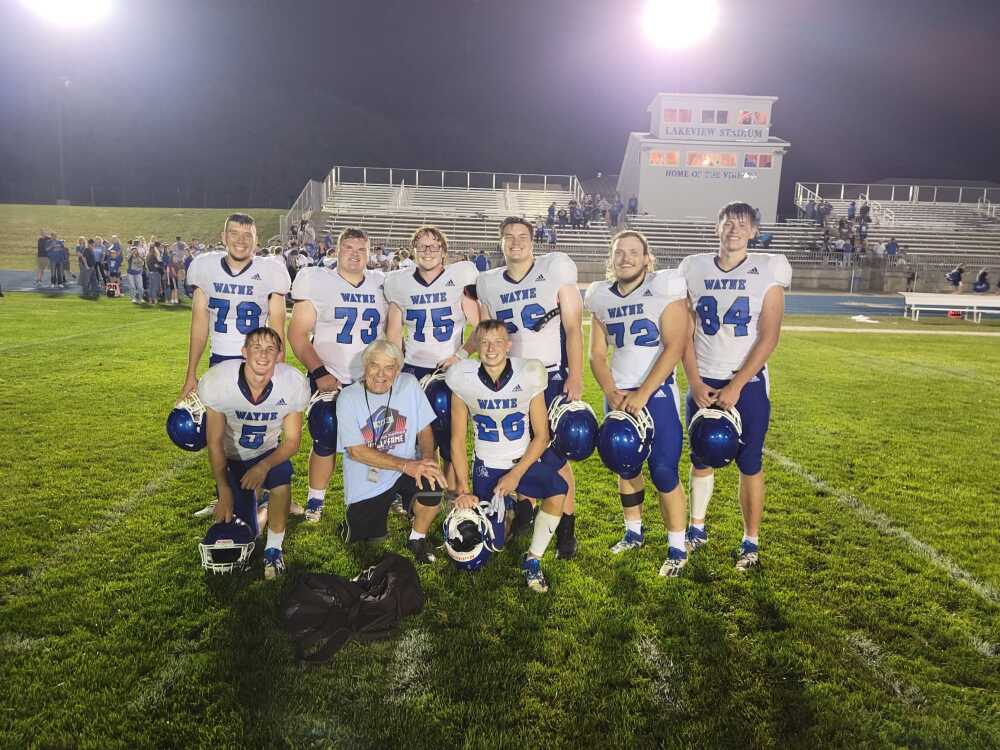 I had a sneaking suspicion this 2021 Wayne football squad was a good one after watching some game film earlier in the week. Then seeing the Blue Devils perform live and in full color tonight, my suspicions were confirmed.

Coach Russ Plager’s forces were simply superb on both sides of the football in this game, bolting out to 22-3 (halftime) and 30-10 leads (3 quarters), before pulling off a 30-17 win over C-1’s #3 Columbus Lakeview.

On defense, the Blue Devils raised havoc with Lakeview’s top notch quarterback, Kolby Blaser by picking off three of the senior’s aerials, two in the first half.

Ball hawking 145 pound junior Ashton Munsell picked off two of the Blaser passes prior to exiting the game with an injury caused by a vicious hit, while classmate Alex Phelps pirated the other.

The amazing thing about this game is the fact Lakeview put up some statistical figures that were good enough to make this a game, but 3 turnovers, 8 penalties totaling 84 yards, and a couple of shaky handling of kickoffs, one resulting in a costly turnover, negated those big yards.

The stats I referred to were the Vikings racking up close to 400 yards of total offense, darn near 300 of which, were on the ground.

But, Blaser’s passing game was in duress all night with the constant defensive pressure applied by the Blue Devils, especially Daniel Judd and Alex Phelps, both of whom made crunching tackles directly in front of me on the Lakeview sidelines.

Wayne wasted no time on their first possession of the game, set up by their defense forcing Lakview to turn the ball over on downs at the Blue Devil 45.

Slick quarterback Tanner Walling, who is a standout basketball talent, promptly completed passes to Judd (7 yards) and Munsell (11 yards), and proceeded to his team 55 yards in 1o plays, culminating with the 16 yard Walling to Phelps touchdown hookup.

Wayne even had to overcome a 10 yard holding call in the drive.

Lakeview then hit the board with 8:25 left in the 2nd stanza when Mason Klug booted a 34 yard field goal that just made over the crossbar, to pull super coach Kirk Frenzen’s troops to within 6-3.

Then came the Vikings interceptions, one of which was turned into 8 points. Brandon Bartos had already slithered through the Lakeview defense like smoke through a keyhole, for a sparkling 13 yard scoring dash with 2:44 left before halftime, before a gut punch came when Bartos intercepted a Blaser pass at the Viking 47 with the clock reading 2:12 before the halftime break.

Following the Bartos interception, a Lakeview roughing the passer penalty moved the ball to the Vikings 37. Junior Eli Barner (I think?) then skirted the Wayne sidelines all the way to the Lakeview one before Walling crashed over from one for a real kick below the belt touchdown with just 1:04 left in the 2nd quarter.

Alex Phelps added insult to injury by going in standing up for the double PAT and Wayne had themselves a 22-3 halftime lead.

I knew Lakeview would come out of the halftime break with a determined “This is Lakeview football” type” drive in the 3rd quarter. Yes, it took just 6 plays for the boys in the sharp black unis to drive 65 yards for a touchdown. All-Stater Adam Van Cleave took it in from a yard out to cut the Wayne lead to 22-10 with 7:37 left.

But, Wayne came right back with a time consuming drive of their own, taking a choke-hold 30-10 lead with just 29 ticks left in the 3rd quarter when Bartos sprinted through a giant gap for a 10 yard touchdown run standing up. He added his own double PAT and you could feel the life slowly slipping out of the Vikings football team.

I heard rumblings after the game about how costly losses like this the past two seasons caused “seasons-gone sour” type skids for these Lakeview Vikings.

NOT gonna happen this year, friends. Kurt Frenzen and the Boyz on the Hill are too talented for that in 2021. I’ve been around football too long, over 1000 games under my belt, to know this will not be the case for this Lakeview football team. Too much talent and pride here.

Next week Lincoln Christian comes to the Hill, then the rest of the schedule is manageable until that monumental cross town rivalry matchup with Scotus, who beat a fine Aquinas team tonight (28-21). And, the game is on The Hill.

As for Wayne? The brutal 2021 killer tour continues next week when the Blue Devils travel to 2nd rated (C-1) Ashland-Greenwood. Then BATTLE CREEK, then NORFOLK CATHOLIC, then BOONE CENTRAL, then O’NEILL, then (of course, you knew it had to be) PIERCE to close out the regular season.

This is a very fine Wayne football team folks. Here’s a compliment for that Blue Devils O-Line too…...You guys remind me a bunch of that Bennington front 7, whom I think is the best in Class B.

So, stay healthy Wayne football team. Your current squad has something special going, just like the past few seasons. You can play with the best of them in C-1, and besides, you beat a very good Lakeview bunch tonight and that’s huge in my book.