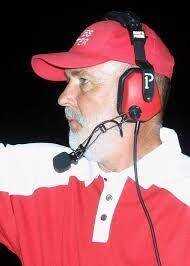 Former Hayes Center football coach Jim Cole will be inducted into the NEMFCA Hall of Fame Saturday night during halftime of the Sertoma 8-Man All-Star Game at Hastings College.

In 1980, Jim witnessed 8-Man Football for the very first time and fell in love with the game. He went on to dedicate 28 years of his life to his Hayes Center Cardinal players and 8-man football. In a career that lasted from 1980 to 2007, Coach Cole compiled a spectacular coaching record of 211 wins and 113 losses. During that span, he led 19 of his teams to the state playoffs, with four of those squads reaching the state semi-finals (1988, 1996, 1997, 1998). He was also named as an assistant coach in the 1994 Eight Man All-Star Game and later served as head coach of the West in 1999.

Over the years, he would send 16 of his players to compete in the All-Star Game. Jim retired after the 2007 season, but did return for one final run in 2010. Coach Cole looks at the number of former students and players that went on to coach and officiate in Southwest Nebraska as a true source of pride. The NEMFCA is honored to welcome him into the Eight Man Football Hall of Fame class of 2020-21.

“Did Jim Cole know how to coach the game of 8-Man football or what? Hayes Center has produced 14 thousand yard rushers since I began tracking them in 1974 and Jim Cole coached TWELVE of them.

The Golden Era in Coach Cole’s day that I recall is that 1996/’98 span when Hayes Center swept their way to three straight Class D-2 semifinal appearances. Two of those, the ‘96 and ‘98 playoff runs, ended in last second heartbreak for Jim Cole’s Cardinals.

That 1996 team, with Travis Lawson, Cody Jeffers, Neil Gohl were a fumble at the one yard line away from Memorial Stadium and even more heartbreaking was Scott Schukar and Nick Harrington stopping the great All-State Travis Lawson at the goal line on a two point conversion that would have sent Hayes Center to Lincoln, as Loomis prevailed 34-33.

You know what though, Coach Jim Cole survived all that, kept producing well-rounded young men who learned things the right way, and went on to great things and teachings that will last a lifetime.

Two words besides “great coach” come to my mind when the name Jim Cole is mentioned………..TEACHER and MENTOR.