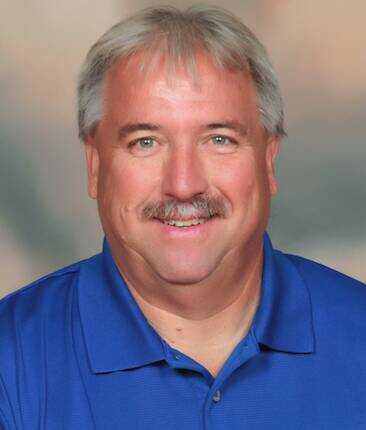 The One and Only Coach Andy Vrbka, THE FACE of NEBRASKA 8-MAN FOOTBALL.

Very few have given more to the game of Nebraska Eight Man Football than Andy Vrbka. He has devoted over 40 years of his life and is entering his 5th decade of promoting our game. Andy began his Eight-Man odyssey as a player for Hall of Fame Coach John O’Brien at Shelby High School from 1976 to 1979. Since that time, he has not only served eight-man players, coaches, and communities in our state, but has also been: a Head Football Coach (22 years), an Athletic Director (10 years), an NEMFCA Officer (20 years), and continues on as our association’s SERTOMA liaison for the All-Star game. During his career, Coach Vrbka compiled a coaching record of 117 wins and 93 losses while taking his teams to the playoffs 13 times and twice making it to the semi-finals. In 1994, he was honored as the Huskerland Prep Report D-2 Coach of the Year, but Andy’s proudest career moment came when he had the opportunity to coach his son Clete from 2005 to 2008. Coach Vrbka was named as an All-Star assistant coach in 1996 and later served as the East head coach in 2003. Over the years, he also sent 18 of his players to the All-Star game, including his son. Andy retired from coaching after the 2008 season but his contributions continue to this day. The NEMFCA is honored to welcome Coach Vrbka to his rightful place in the Eight Man Football Hall of Fame Class of 2020-2021.

…….“My take on Coach Vrb? PURE GOLD, simple as that. The man always seems to have a smile on his face and was born to be a leader, as witnessed by his wonderful bio above. If it has to do with 8-Man football, Andy Vrbka is forever at the forefront and always in command and in control of his duties, and his duties are always at the top, where important decisions need to be made.