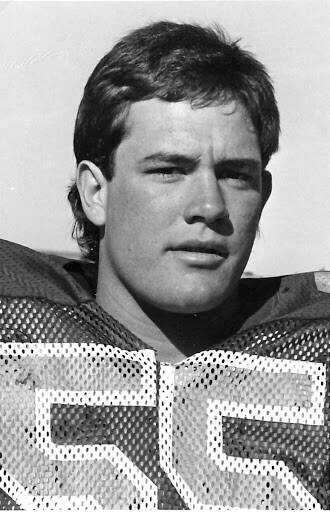 Sandhills high school (Dunning NE) RB/LB, and later an All-American at Chadron State College, was one of the greatest lateral movement linebackers of his day back in the 1980s. Even more astounding was the fact Anderson didn't play his first 11-Man football game until he suited up at Chadron State.

In the mid-1980’s, Corey was a standout running back and linebacker while leading the Panthers on a run to the state finals in 1985, where they finished as a runner-up. His dominance on both sides of the ball (including 1,157 yards rushing his senior season) helped him achieve multiple honors during his prep career including: 1st Team All-Conference, 1st Team All-State, and Loup Valley Male Athlete of the year in both 1986 and 1987. After his senior season, Corey was selected to play in the 8-Man All-Star game and the Western Nebraska All-Star Game- where he was named that game’s most valuable defensive player. Corey then moved on to Chadron State College where he became the Eagles’ all-time leading tackler with 398 career stops and added a linebacker record of 17 career turnovers (9 fumbles/8 interceptions). He was named to the all-State College team 3 times by the Omaha World Herald as well as being recognized as an NAIA Division II 1st team All-American in 1990. Since then, Corey has been named to both the Chadron State College All-Century Team and The Chadron State College Athletic Hall of Fame. The NEMFCA is honored to now welcome him into the Eight Man Football Hall of Fame Class of 2020-21.

**My thoughts on Corey Anderson: On offense at Sandhills, Corey Anderson played fullback and was definitely cast in the shadows of 1,895 yard phenom David Roseberry when Sandhills made the D-1 Finals in 1985 and were overmatched against an almost unbeatable Bancroft-Rosalie. But remember who rolled many would-be tacklers when Roseberry carried the mail…...Corey Anderson. I saw Anderson play one game his senior season and his lateral movement from his linebacker position just floored me. At the time I could not recall an 8-Man athlete covering sideline to sideline quite like Corey Anderson did that night. Chadron State must have noticed it too because they sunk their hooks into the Sandhills super defender and never let go. It paid big dividends for super Coach Brad Smith as Anderson turned out to be one of the greatest defensive players of all-time for the Eagles. I really feel that Corey Anderson’s performance after his high school days (@ Chadron State) landed him a spot in our prestigious NEMFCA Hall of Fame, and rightly so. They grow ‘em tough up there at Sandhills with the likes of Anderson, super Professional Rodeo Cowboy Cort Scheer, slender, but mighty Bernie Jensen and all those Coffman boys like Seth, Jason, Mic and Pat (all 1000 yard rushers). If I were starting an 8-Man football team from scratch, I would take a dozen players like Corey Anderson, a pure football player through and through.