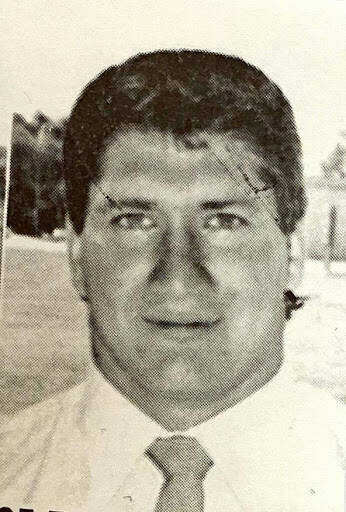 As an offensive and defensive lineman, Paul was a dominating force at the line of scrimmage for the powerful Lawrence teams of the early 1980’s. He helped lead his team to the state finals 3 times in his career, including runner-up finishes in his sophomore and junior seasons.

His proudest moment as a player then came in 1982, when he helped the Panthers to an undefeated season and the Class D-2 State Championship. This 1982 Lawrence football team was one of the strongest 8-Man football teams I EVER watched.

Panther head coach Kurt Johnson had these guys ready to steamroll opponents and the playoff run by Lawrence in ‘82 was one of the most impressive in history. They punished visiting a 9-0 Dalton-Leyton 57-6 in Lawrence in an afternoon quarterfinal tilt, went up to Humphrey High and spanked the unbeaten Bulldogs 50-12, then went TO Ansley and blasted the unbeaten Warriors 67-8 after sprinting to a 30-0 opening quarter lead.

Who goes to Ansley and beats Dan Moore 67-8? Incredible.

Paul Kucera finished his career with over 300 tackles and 50 tackles for loss on defense while also paving the way for a backfield that averaged over 10 yards per carry on offense. Paul cleared the way for 1000 yarder Russ Faimon during that 1982 season.

Those Panther teams cemented a foundation of hard-nosed football that would see Lawrence go on to win two more state titles in the 80’s and contend for and win several championships in future decades.

In his prep career, Paul was chosen 1st Team All-Conference 2 times, 1st Team All-State in 1982, and was selected to play in the 1983 Eight-Man All Star Game.

After high school, he was a 3 time letter-winner and a 2 year defensive starter for Kearney State College (where he was named All-Conference in both 1986 and 1987). The NEMFCA is honored to welcome him into the Eight Man Football Hall of Fame Class of 2020-2021.

Paul Kucera was simply a pure football player who loved the game. You don’t go on to be a standout for a program like Kearney State College back in the day without loving the game of football. This man could play the game, friends.