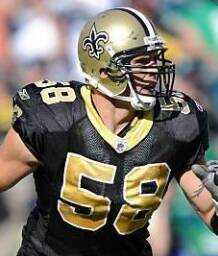 Former St. Edward star Scott Shanle is set to be inducted into the Nebraska Eight-Man Football Coaches Hall of Fame on Saturday, June 19th at Hastings College. The ceremony will be during halftime of the Sertoma 8-Man All-Star football game. You may recall Shanle was named All Big 12 at Nebraska twice and was a ten year veteran of the NFL, earning a Super Bowl ring with the New Orleans Saints.

When you talk about 8-Man football superstars who carried their talents as far as they could go in the sport of football, the name Scott Shanle comes to mind.

How good was Scott Shanle in high school? During his junior and senior seasons At St. Edward, the 6-2, 210 pound Shanle rushed for 4,066 yards and most of his 90 career touchdowns.

During his prep career, he played both running back & linebacker and was responsible for over 4,500 rushing yards and those 90 TD’s. He also led the Beavers to three state playoff appearances and a 39-3 record in his final three seasons for legendary coach Rich Lemburg. During that span, Scott was selected All-Conference three times, 1st Team All-State twice, and was honored as the 1997 8-Man Player of the Year. He was also selected to play in both the 1998 Eight Man All-Star Game and the Nebraska Shrine Bowl.

An imposing figure at both RB and LB, Shanle struck fear into every single opponent (except one) that I can remember. Can you imagine a 6-2, 210 dude that logged sprint times of :10.6 and :22.3 coming full steam ahead in your direction? The urge to dive for his ankles and tell your coach you simply “mis-timed" the tackle would have been a great temptation.

Scott went on to a stellar career as a linebacker for the Nebraska Cornhuskers famed “Blackshirt” Defense. He set position records for pass breakups in a game and in a season and was honored as a 2-time All-Big 12 Conference selection.

He was later drafted to the NFL and played 10 seasons for the St. Louis Rams, Dallas Cowboys and New Orleans Saints. While with the Saints, playing at 6-2, 245 pounds while still running a 4.57 forty, Scott Shanle was named the 2008 Defensive MVP for his team and finished as the franchises’ 8th all-time leader in career tackles.

He was also a key contributor in helping the Saints defeat Peyton Manning’s Indianapolis Colts in Super Bowl XLIV (44) to win the 2010 World Championship. The NEMFCA is honored to now welcome him into the Eight Man Hall of Fame Class of 2020-21.

Is Scott Shanle the greatest Nebraska 8-Man football player of all-time when you consider all he accomplished after his career at St. Edward?