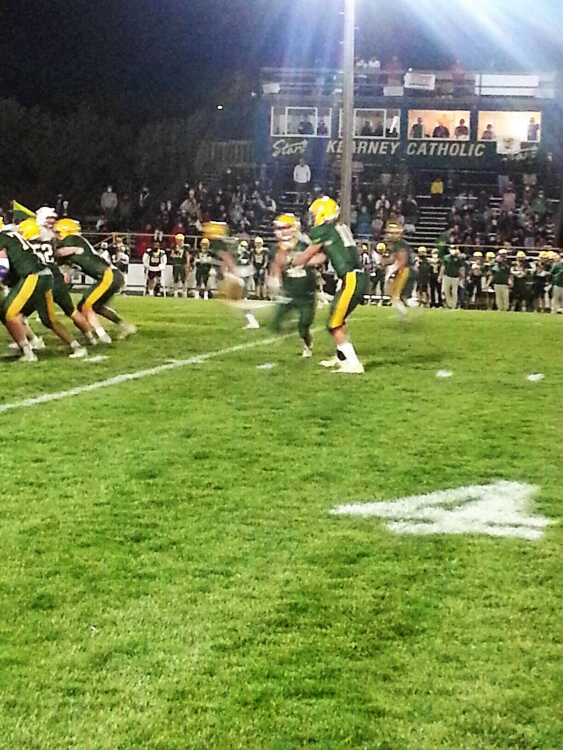 Kearney Catholic prepares to give the ball to phantom like running back Cale Conrad, who ran for 227 yards on 39 yards and a pair of scorers in the Stars 21-12 win over Auburn.

There are times when one just doesn’t know what a Coach’s game plan might be going into a big game at the high school level. That’s what makes the game of football at the High School level so priceless. These Coach’s watch game film, see deficiencies, then formulate a plan of how to attack and exploit it (them).

Tonight, it appeared to me, Kearney Catholic head coach Rashawn Harvey, former head coach Dave Colling and the gentlemen of the Stars staff came up with a dandy, as they turned 5-10, 185 pound senior running back Cale Conrad loose to the tune of 39 grinding, up the gut carries.

The twisting, turning, almost phantom-like Conrad responded with a whopping 227 yards and a pair of touchdowns, as Kearney Catholic ran past Auburn 21-12. Mr. Conrad just made his way up this guy’s list of favorite running backs that usually cause tossing and turning sleepless nights, recalling what I had just witnessed.

It took Kearney Catholic just 5 plays to advance from the Auburn 45 yard line to paydirt on that third possession. The Stars good field position was set up by a great Brody Darnell punt that unfortunately was held up in the wind, even though he sailed the thing close to 40 yards high in the Myles Field air.

Cale Conrad finished off the drive by darting into the endzone from 2 yards out with just 1:42 left in the opening quarter, making it 7-0 following All-State kicking candidate Spencer Hoagland’s PAT boot.

Conrad’s scoring run came on his 11th carry of the 1st quarter and kids, he wasn’t close to being done in the first half.

Auburn then fashioned a long drive of its own that carried over into the second quarter, only to come up short at the Kearney Catholic 18 yard line. Darnell was sharp on the 13 play, 59 yard drive, reeling off runs of 5, 6, 7 and 6 yards, while completing passes of 15 yards (to Ryan Dixon) and a pair of completions to Connor Clark that covered 23 yards.

But that ended up being the story of the night for the Bulldogs, some pretty impressive drives that simply came up empty because of the Stars bend, but not break defense.

Heinrich Haarberg would then lead Kearney Catholic downfield for another touchdown, connecting with classmate Austin Christner for a 17 yard scoring strike just 19 seconds before halftime. Just moments before that, Haarberg reeled off a terrific 43 yard touchdown run down the Auburn sideline, only to have it nullified by a holding call back at the Auburn 40.

Kearney Catholic really delivered a crushing blow on their opening drive of the 2nd half, driving it 96 yards in 14 plays to make it 21-0, Stars. Cale Conrad toted the football on exactly half of those plays, gaining 32 yards, the final 2 resulting in a touchdown.

Conrad was impressive on the drive, taking the handoffs from a slick delivering Henrich Haarberg, disappearing into the depths of Auburn humanity, then re-emerging like a ghost in the night for more yardage downfield. “Like smoke through a keyhole”, Oklahoma coach Barry Switzer used to say when he described his running back Billy Sims.

The “killer” drive consumed 5 minutes and 39 seconds of the 3rd quarter. Meanwhile, the Stars defense was disrupting everything Auburn tried to get going. One of the positive things of that 3rd frame for Auburn was Brody Darnell’s booming punts, which kept Kearney Catholic at bay, deep in their own territory.

And, other than that opening third quarter drive, the Bulldog defense was doing an admirable job of holding Kearney Catholic’s offense at bay.

Auburn finally received a break when a Spencer Hoagland punt was held up by the wind, much like Darnell’s had been earlier in the contest. The wind-hampered punt set up good field position for Tony Janssen’s ‘Dogs at the Kearney Catholic 41 yard line.

It was then time for Darnell to target All-State basketball star Daniel Frary, one of Class C-1’s finest athletes. Brody connected with Frary for a 23 yard strike that carried all the way to the Stars 12 yard line. And just when it looked like Auburn was going to come up short, Darnell found Ryan Binder, younger bro of two-time All-State basketball star Cam Binder (who also happens to be Auburn’s leading tackler), in the right corner of the endzone for a 6 yard touchdown.

The play, coming on a 4th and 6, pulled the Bulldogs within 21-6 with plenty of time (8:15) left in the Class C-1 Quarterfinal playoff game, but the Stars had other ideas.

Kearney Catholic then proceeded to chew up three minutes, 49 seconds off the clock, with Cale Conrad doing more damage in the form of those twisting, gliding runs. He ripped off gains of 15 and 17 yards, advancing the Stars to midfield before Spencer Hoagland buried Auburn on their own 19 with 4:11 showing on the clock.

The Bulldogs, who had burned all their time outs earlier in the quarter hoping to get the ball back again. The Bulldogs offense then gained zero yards on the next three downs, turning the ball over to the Stars at their own 17 after Brody Darnell lost 2 yards on a 4th and 10.

Kearney Catholic took over at the Auburn 19 with 3:13 left on the clock (4th quarter) and were intent on running the clock out when Heinrich Haarberg ran an option to his right. Haarberg kept the football himself, but was sandwiched at the 8 with vicious hits by Stetson Nieman and Connor Clark. The ball popped loose, was picked up by Connor Clark, who then took it 92 yards for an Auburn score with 1:11 showing on the clock.

The Bulldogs tried an onside kick, but the Stars covered it, had Haarberg take a knee twice, ending the ballgame.

As stated earlier, the remarkable performance of Cale Conrad was the talk of the night. The senior back had the finest night of his career, running 39 times for 227 yards and two touchdowns, often pulling off runs that made him look like smoke going through a keyhole, as he took the handoffs, accelerated, then did his Barry Sanders routine.

Heinrich Haarberg added 37 yards on 9 carries, as the Stars compiled 265 yards on the ground. Haarberg finished the evening completing 5 of 13 passes for 77 yards with one touchdown. Austin Christner led the receivers with 29 yards on a pair of receptions.

For Auburn, it was a tough night offensively. Brody Darnell, who ran for 51 yards on 11 carries in the first half, finished the game with just 55 yards on 15 totes. Ryan Dixon, who had exploded for 583 yards and 10 TDs the past 4 games, could muster only 28 yards on 8 touches.

Brody Darnell completed 8 of 17 passes, while Connor Clark actually went one for one in the passing game, hitting Daniel Frary for a 23 yards gainer, giving the Bulldogs 116 aerial yards for the night.

Kearney Catholic unofficially outgained Auburn in total yards for the game, 342 to 195 yards.

The Stars advanced to the C-1 semifinals next Friday, earning a trip to play Adams Central, a team they beat 33-22 back on October 9th in Kearney.

……….And…….. (Those Darnell bloodlines - Brody Darnell unofficially finished the year with 806 rushing yards. His older brother Baily Darnell, was a 1000 yard rusher for the Bulldogs, rolling for 1,156 yards his junior season in 2017. Dad Chris Darnell, was a member of the original “Three Horsemen” from that 1992 State Class D-2 Champion Falls City Sacred Heart team. Chris rushed for 1,327 yards, Chris Carpenter followed with 1,181 and sophomore Nate Froeschl had 1,059.Only four teams in history have boasted backfields that included a trio of 1000 yard rushers.)

***On Heinrich Haarberg: Here’s the deal. Nebraska offered Heinrich prior to the 2020 season. From what I understand, they intend for him to keep playing the quarterback position. Since that offer was issued, a ton of eyes have been on Heinrich Haarberg. It’s like everyone expects the lad to throw the ball 40 times a game for 400 plus yards and a boatload of touchdowns every time he pads up.

Sure, last season he completed 57% for 1,817 yards and 23 TDs. Stiil, this year, Haarberg has again hit 57 of his passes, this time for 1,606 yards and 16 TDs, but still many cannot understand why his numbers are not off the charts.

It is an unfair assessment of a young man who does exactly what is best for his football team. It is, and not has been “The Heinrich Haarberg Show”. This is about Kearney Catholic football and what it takes for the Stars to make an appearance in Lincoln and come away with a C-1 title and Heinrich is 100% alright with that. He's a team player.

Keep this in mind. The Huskers do not offer Nebraska high school football quarterbacks all that frequently, but when they do, I’m relatively certain they know what they’re doing. Bottom line. Heinrich Haarberg is not going to pass for 300-400 yards every game this season. It’s not part of the Stars game plan, but make no mistake about it, this young man is a Division One football player. He already has his football team one step from appearing in a State Championship game.