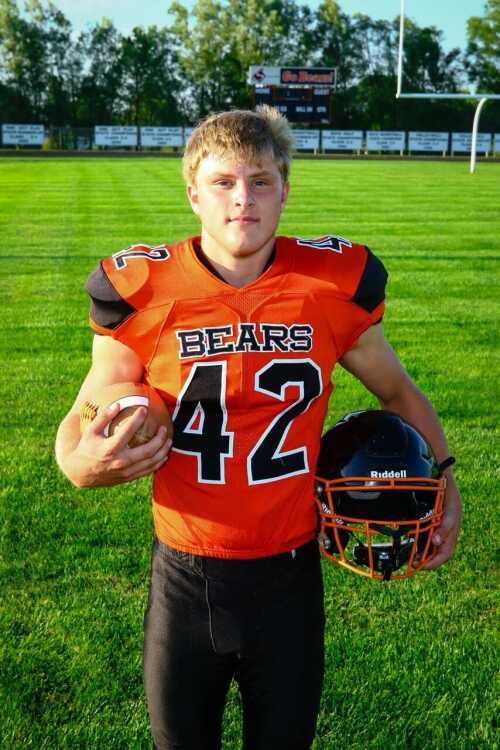 Laurel-Concord-Coleridge junior Evan Haisch ran for 302 yards on 47 carries and scored 7 touchdowns in the Bears opening round playoff win over Thayer Central.

*Evan Haisch-Laurel-Concord-Coleridge - Junior running back lit up the scoreboard with his 7 touchdowns in the LCC Bears 76-46 win over Thayer Central in the opening round of the Eight-Man 1 football playoffs. Haisch, who cracked the 1000 yard rushing barrier a few weeks back, rolled up 302 yards rushing on a grueling 47 carries.

Evan’s touchdown runs came from 17, 5, 1, 11, 3, and 4 yards out in the Bears triumph over a Thayer Central team who boasted a superior air attack. Haisch has an unofficial rushing total of 1,597 yards heading into the Laurel-Concord-Coleridge D-1 quarterfinal home matchup against #1 seed Tri-County.

Serbando Diaz is just 11 yards shy of cracking the 5000 Yard Career Rushing mark. Quade Myers needs just 109 rushing yards to nail down his third consecutive 1000 yard season and he is just a junior.

If Myers reaches his third 1000 yard rushing season, it will mark the first time in history TWO, THREE-TIME 1000 Yard Rushers played in the same backfield.

*Bryce Reed, Isaiah Zelasney, Big Kyle Sterup - Osceola looked mighty tough in their 52-0 Class D-1 opening round playoff victory over a good Pender football team. Bryce Reed, who is rapidly becoming one of 8-Man football’s finest running backs, rushed for 236 yards on 23 carries and 3 touchdowns. The Osceola flyer was already at 215 yards when the halftime gun sounded and has accumulated 1,492 yards on just 105 carries (14.2/per) with 28 touchdowns thus far in 2020.

Sophomore speed merchant quarterback Isaiah Zelasney, nephew of Osceola head basketball coach Jason Zelasney, ran 10 times for 89 yards and 4 touchdowns and improves with every game he plays. Returning All-State TE/DT Kyle Sterup was a steamrolling, pancaking force on offense and a Doctor of Excedrin Headaches on defense, where he delivered 15 bone crunching tackles.

Thus far, Zelasney has rushed just the ball just 64 times, but has 584 yards and 24 touchdowns to show for it, a TD every third time he runs the pigskin. Although Zelasney rarely throws, he has hit 10 of 21 passes for 202 yards and a pair of touchdowns this season.

People seem to forget, most of the returning players from that 2019 Osceola/High Plains state champion team were from Osceola and are now a force for the Bulldogs in 2020. To reach Lincoln again, the Bulldogs must beat Humphrey St. Francis this Friday and possibly Falls City Sacred Heart (if the Irish beat Creighton).

*Sutton Pohlman-Stanton - The 6-1, 190 pound Pohlman, absolutely one of Eight-Man football’s finest all-around players, ran for 157 yards on just 11 touches in the Mustangs 81-28 trouncing of Exeter-Milligan/Friend. That leaves Pohlman just three yards shy of the one thousand yard rushing mark as Stanton heads to Loup City this Fridayto face Arcadia/Loup City in a battle of two of Eight-Man 1 football’s most impressive teams. Kickoff is set for 6 PM.

*Haustyn Forney, Spencer Engel-Humphrey St. Francis - Dynamic Duo scored 6 touchdowns between the two in the Flyers 74-6 win over Niobrara-Verdigre. Forney and Engel split up the touchdowns evenly with Haustyn getting into the end zone from 8, 7, and 17 yards out. Engel made his a three TDs a little more interesting, hitting paydirt from 29 and 24 yards away, then catching a 24 yard TD pass from Tanner Pfeifer.

Pfeier also tossed a 9 yard scoring pass to Justin Leifeld and scored a pair of rushing touchdowns himself, going in from 31 and 14 yards out in the D-2 First Round playoff game.

The senior sensation now has 1,126 yards rushing with 22 TDs and 1,741 passing yards with an additional 35 touchdowns going into the Spalding Academy’s opening round playoff game at Creek Valley this Friday.

*Sam Vortherms, Brody Eggers-Creighton - Vortherms and Eggers combined for 297 yards rushing in the Bulldogs 54-26 triumph over Osmond in the 1st Round of the Class D-2 playoffs last Thursday. Junior RB Brody Eggers reeled off 158 yards on 29 carries with scoring jaunts of 20, 1, and 2 yards. Senior QB Sam Vortherms added 139 big ones on 26 touches with touchdowns covering 6 and 4 yards. Vortherms 139 yards catapulted him over the 1000 yard rushing mark for the season, giving him 1,069 yards (13 touchdowns).

Vortherms also completed 4 of his 9 passing attempts for 79 yards, but two were caught for Creighton touchdowns by RJ Wilmes (11, 20 yards). Vortherms, the Creighton field general, has completed 30-62 passes for 723 yards with 9 TDs and 2 INTs thus far in 2020. That puts the senior in the feared Dual-Threat category.

*Owen McDonald-McCool Junction - Punished Dorchester with his 276 yard, 5 touchdown night last week as McCool rolled, 68-6. It took just 12 carries for McDonald to reach the 276 yard mark. In reality, the 12 carry game is somewhat of a “heavy workload” for the senior sensation, who averages 18.6 yards a pop.

In 7 games this fall, Owen McDonald has carried the football just 59 times, rushing for 1,111 yards and 30 touchdowns. That is a touchdown every other time Owen touches the football.

The 5-9, 155 pound McDonald, who was a force for the State 6-Man runner-up McCool Junction Mustangs a year ago, has piled up 3,868 Career All-Purpose yards with 88 touchdowns the past 4 seasons for McCool, a team that has compiled a record of 26-3 that past three seasons.

*Remington Schimonitz-Paxton - Say that name three times in succession and not stumble. Better yet, attempt to stop the 6-3, 160 pound senior from cracking the 1000 yard rushing mark for the season. SEM couldn’t do it , as Paxton defeated the Mustangs 30-24 in a top rated matchup of top notch Six-Man teams.

Schimonitz ran for 182 yards on 16 carries and two touchdowns in the big win for Big Scottie Jorgenson’s Tigers. That gives Remington 1,152 yards and 19 touchdowns entering the postseason, which begins this Friday. Senior QB Keegan Schow also threw for 180 yards (10 of 16) and 3 TDs in the game.

6th seeded Paxton should know their 1st Round opponent very well, as they welcome in 11th seeded Sumner-Eddyville-Miller…...again.

*Hayden Olds-Minatare - Two-time Six-Man 1000 yard rusher rambled for 222 yards on 25 carries and 3 TDs in Minatare’s regular season finale 63-34 loss to Paxton. Olds scored from 23, 7, and 3 yards out in the final game of his illustrious career for the Indians, who finished 1-5 this fall, missing the playoffs.

You know what, man? As a 155 pound sophomore, Hayden Olds still made 92 tackles, had 32 solo stops and 17 tackles behind the line of scrimmage for a team that went 9-2 and advanced all the way to the 6-Man semifinals before losing to Hay Springs.

This young man is a fine football player.

*Aiden Hedstrom-O’Neill St. Marys - 6-3, 180 pound junior quarterback accounted for 6 touchdowns in the Cardinals 56-18 win over Sandhills Valley in the 1st Round of the D-2 playoffs. Hedstrom completed 5 of 13 aerials for 91 yards and three touchdowns while getting it done on the ground as well with his 149 yards on 21 carries and another trio of TDs.

For the season, Aiden Hedstrom has completed 40 of 74 passes for 574 yards and 12 TDs with just a single INT. On the ground, the junior has amassed 839 yards and 19 touchdowns, definitely placing him in that coveted Dual-Threat QB category.

*Bryce Schmidt-Anselmo-Merna - If you are going to lose in the playoffs, you might as well go out with a bang. So Bryce Schmidt, the power-packed, 5-6, 130 pounder did just that by rushing for 168 yards on 18 carries and a TD in the Coyotes 58-18 loss to powerful Dundy County/Stratton.

The yardage elevated the junior running back over the thousand yard rushing mark, giving him 1,032 for the 2020 season. Even as a 120 pound sophomore, Bryce ran for 555 yards and made 58 tackles from his linebacker position. And 38 of those were solo stops.

*Aiden Kuester, Bryson Gadeken-Neligh-Oakdale - The Warriors decided to emphasize their ground attack a bit more in their opening round playoff matchup with Elkhorn Valley. The result? A pair of young pups both rushing for over a hundred yards and a resounding 52-12 win over the Falcons.

Sophomore QB Aiden Kuester, who leads all of 8-Man football in Passing Yards, rushed 14 times for 153 yards and 3 touchdowns, while Bryson Gadeken, a good looking 6-2, 175 pound Freshman, added 121 yards on 21 carries and 3 touchdowns as well.

Oh no, Kuester didn’t forget the passing game, connecting on 9 of 13 passes for 130 yards and a touchdown, but Neligh-Oakdale actually leaned on the ground game (387 yards) compared to the passing game’s 130 yards.

It is probably a misconception that Neligh-Oakdale is primarily a passing team when the truth of the matter is, the Warriors pass/run ratio is 55% to 45%. (2,364 passing/1976 rushing).

Now that you are a highly educated Class D-1 playoff individual, we can tell you the #6 seeded (8-1) Neligh-Oakdale Warriors will host the 11th seeded Hi-Line (5-3) Bulls (Elwood/Eustis-Farnam) in a Friday night matchup (5 PM kickoff) in Neligh.

Surely that is all you need to know, right?

*Isaak Norman-Fullerton - Senior QB hit 21 of 38 passes for 238 yards and both touchdowns in Fullerton’s 60-14 loss to Fall City Sacred Heart in the opening round of the D-2 playoffs. Norman ended the year with 1,553 yards through the air (17 TDs) and 532 yards on the ground with another 11 touchdowns in just seven games for the 2-5 Warriors.

*Ethan Piper-Harvard - Six-Man runner rushed for 120 yards on 20 totes and three touchdowns in the Cardinals regular season finale 50-39 victory over Franklin. That pushes Piper over the 1000 yard rushing mark as defending Six-Man champion Harvard concludes their 2020 season with a record of 5-3.

Both Harvard (11th) and Franklin (4-1/16th) had high enough wild card points to qualify for the 6-Man playoffs but are both ineligible due to a boy enrollment that exceeds the 27 student limit for 6-Man football schools.