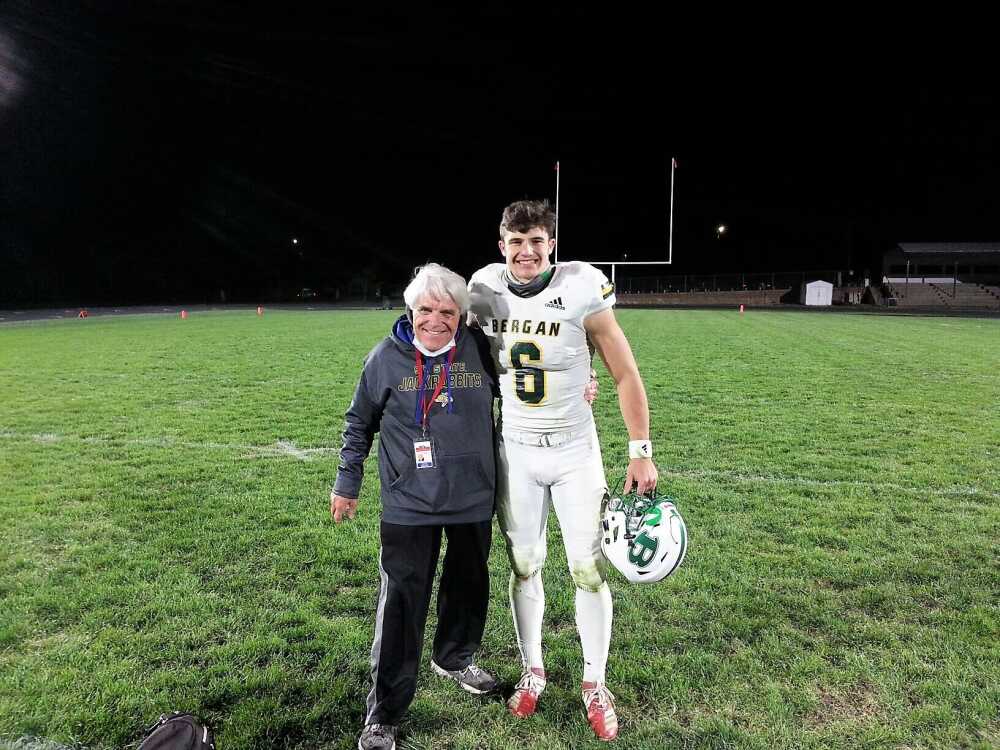 *Koa McIntyre-Fremont Bergan - Junior quarterback led his Knights to a 28-24 overtime win over C-2, #1 and defending state champion Oakland-Craig. The win over those “other” Knights marked the first victory by Bergan over Oakland-Craig since 2017 and ended a 21 game winning streak for the defending C-2 champs.

McIntyre was very sharp in the big win, completing 12 of 19 passes for 230 yards and 3 touchdowns. Koa also rushed 14 times for 62 yards and made three tackles on defense.

Tough running junior Chris Pinales, who has been coming on strong the past 3 games, led the rushing attack with 80 yards on 13 totes and an 11 yard TD run.

Cale Janke led the defense with 10 tackles (5 solos, 2 TFL). Jarett Boggs also had 10 stops (4 solos). Both Janke and Cooper Weitzel had interceptions in the game, while freshman kicker booted 4 PATs and averaged 43.4 yards on his kickoffs, keeping Oakland-Craig deep in their own territory to begin their possessions.

The thing that makes this Archbishop Bergan so dangerous in the passing game is the fact the Knights have SIX players with over 140 yards receiving. Two have over 250 yards in 8 games and Logemann leads the pack with 22 catches for 322 yards and 6 touchdowns. AND, this team is young.

When Cole Payton wasn’t running wild, RB Dominic Rezac was. Rezac rushed for 81 yards on just 8 touches and broke a 58 yard touchdown run with 3:22 left in the 3rd quarter.

Koby Bretz has been targeted 30 times this season and caught 29 of those for 444 yards and 5 TDs. I relly love the way this Koby Bretz plays the game.

*Carter Seim, Isaac Noyd-Cross County - Junior sensation Carter Seim may have made Humphrey/Lindsau Holy Family wish it was basketball season in the Cougars 68-12 win over the Bulldogs. Seim literally exploded (and it wasn’t the first time) for 299 yards on just 14 carries (21.4/per) and SIX touchdowns covering 34, 65, 62, 9, 52 and 55 yards. Backfield partner Isaac Noyd, who has also exploded more than once the past two seasons, gained 98 yards on only 5 totes with a 65 yards TD sprint. Christian Rystrom returned a kickoff 68 yards for a score after Humphrey/LHF scored the first touchdown of the game. Cross County then proceeded to score 62 unanswered points.

On the defensive side 6-6 junior Cory Hollinger had 11 tackles (3 solos), Christian Rystrom made 9 tackles and intercepted a Jacob Sjuts pass, and Izaac Dickey added 7 tackles and added a fumble recovery in the fun.

Cross County rushed for 514 yards as a team in the lopsided win over a pretty good football team coached by Hall of Famer Bill Mimick.

*Cael Wichman-Platteview - 5-11, 155 pound sophomore was a shining star in Platteview’s 29-17 win over Malcom. Wichman ran for 141 yards on 26 carries and scoring jaunts of 24, 1 and 5 yards, made 5 tackles on defense and blocked a punt playing on Trojans special teams.

The Platteview defense was tough on the Clippers with sophomore Leo Guenther recording 12 tackles (3 solos). Junior Nick Horst was right behind with 10 (3 solos), sophomore Gage Ryba picked off a Malcom pass and returned it 35 yards, while junior Gage Schram, senior Elliott Steinhoff and senior Brennan Campbell all recovered fumbles.

*Aiden Young, Grant Gutschow-Elkhorn High - The swift running Young rambled for 125 yards on 14 carries and touchdown runs of 44, 10, 19 and 3 yards in the Antlers romp over first year school Elkhorn North. 6-1, 190 pound quarterback Grant Gutschow completed 7 of 10 passes for 137 yards and a pair of touchdowns.

6-4, 210 pound Drew Christo caught one of the Gutschow TD aerials ( a 63 yard bomb) while junior Dane Peterson grabbed the other, covering 14 yards.

For the year, Grant Gutschow has completed 65 of 105 throws for 952 yards/10 TDs. Meanwhile, Aiden Young has been providing the ground power with his 944 yards rushing.

*Easton Becker-Hartington Cedar Catholic - The powerful runner bolted for 106 yards on 16 carries and 12 yard touchdown in the Trojans 46-14 win over Ponca. That officially gives Becker 1,091 yards with 14 touchdowns. Hunter Thoene, Myles Thoene and Charlie Schroeder all picked off Bryer Bennett passes and turned then into Pick 6’s in the route.

When was the last time you saw THREE Pick Sixes in one game? Cedar Catholic will close out their 2020 regular season with a huge home game vs. Norfolk Catholic. The winner will be crowned Class C-2, District 3 champions and earn an automatic berth into the C-2 post-season which begins a week for Friday on October 30th. The loser will apparently make it considering the fact Cedar is currently 7th and Catholic 11th in the NSAA C-2 wild card standings.

*Morgan Rump-Blair - Bears quarterback achieved perfection in the passing department by hitting 10 of 10 aerials, good for 145 yards and scoring toss of 35 yards to Noah Osterhaus in Blair’s 50-0 victory over Ralston. Rump also rushed 6 times for 77 yards with short touchdown runs of 3 and 5 yards.

Morgan also booted 6 of 6 PATs and did all the kickoffs for the victorious Bears, who led 37-0 at the half.

For the season, Morgan Rump has hit 68% of his 134 throws for 1,276 yards and 13 TDs. Blair is a dangerous football team with Morgan Rump’s passing skills and three time 1000 yard rusher Dexter Larsen battering defenses with his power dashes.

*Rylan “The Roadrunner” Aguallo-Mitchell - Aguallo, whose blinding speed reminds me of the cartoon character The Roadrunner (meep-meep), sprinted for 211 yards on 27 carries and touchdown dashes of 1, 52, 13 and 35 yards in the 7-1 Tigers 41-6 drubbing of Gering. Of course Aguallo caught a 70 yard touchdown pass in the game and also made 4 tackles on defense. For the season, The Roadrunner has 1,536 yards and 17 touchdowns.

*Dylan Vogt-Pender - 6-1, 200 pound senior All-State candidate made life tough on Homer’s defense with his 280 yards on 28 carries against the Knights last week. Vogt, who rushed for 1,040 yards a year ago, scored five touchdowns in the win. The rambling senior, who appears to have been injured for part of the year, upped his 2020 rushing total to 855 as the Pendragons head into the playoffs this Thursday.

*Tyson Denkert-Kenesaw - 2019 All-Stater was everywhere (as usual) in the Blue Devils 61-18 win over an often pesky Palmer team. Denkert scored 3 rushing touchdowns, returned a kickoff 60 yards for another, completed 1 of 2 passes for 25 yards and a 25 yard scoring toss to Sean Duffy. Denkert also made 7 tackles on defense with 4 solos.

The Swiss Army Knife junior has now rushed for 1,360 yards on 119 carries (11.4/per tote) and 21 TDs as Kenesaw prepares for their Thursday opening round Class D-2 playoff clash with…………...you guessed it, Palmer (3-5). Have to love those six day turnaround rematches, right?

*TJ Murray, TJ Covington-Boys Town - The TJ’s were the difference in the Cowboys 34-28 win over Arlington. Junior QB Tony “TJ” Murray rushed for 124 yards and scoring dashes covering 6, 17, 2 and 69 yards, while junior classmate Timar “TJ” Covington led the way with 172 yards on the ground that included a 39 yard touchdown run.

*Jack Holsing-Tri County - 5-10, 160 pound senior rushed for 178 yards on just 13 carries with TD runs of 4, 16 and 30 yards in the Trojans 68-22 win over Thayer Central. Tri-County churned out 506 yards on the ground in the regular season closer. Sophomore Carter Siems also surpassed the century mark in rushing with his 109 yards on 10 carries and touchdowns of 1 and 19 yards. Quarterback Cole Siems, who ran for over a thousand yards a year ago, added 51 yards on only 4 touches with two of those going for touchdowns on runs of 1 and 14 yards.

Norman was on fire, completing 5 of 8 passes for 235 yards and 3 touchdowns. Isaak’s touchdown strikes were gathered in by Grant Pickrel (35, 55 yards) and Trey Dodds, who caught a short pass then turned on the jets for a 69 yard touchdown sprint. Pickrel also scored on a 5 yard run.

Norman, incidentally, will enter the postseason as one of Class D-2’s most prolific quarterbacks, having completed a monster 66% of his 129 passes for 1,315 yards and 15 touchdowns in just six games. Norman will be targeting Cole Horacek (405 yards), Trey Dodds (385 yards) or Grant Pickrel (334 yards) Thursday in the opening round of the playoffs.

Despite their 2-4 record, the Warriors get into the Class D-1 playoffs and earn a Thursday trip to Falls City to face the Sacred Heart Irish at Jug Brown Stadium. The Warriors had a killer schedule this fall and suffered a two week layoff due to COVID issues. This bunch deserves to make the post-season in my humble opinion.