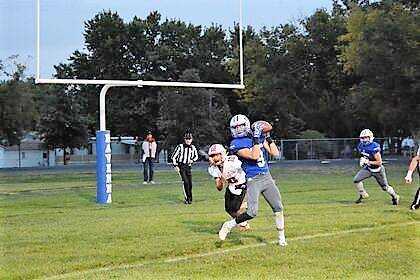 Ravenna WR Keagan Brodersen (blue jersey w/football) had a career night in the Bluejays 44-38 win over a fine Amherst team. Brodersen is the son of PA Announcing Legend Rich Brodersen, who was a standout athlete for McCook back in his day. *(photo courtesy of Monte Steele)

Keagan’s TD grabs covered 44, 62 and 71 yards against a fine Amherst squad. For the season, young Brodersen has been targeted 23 times, caught all 23 passes, for 411 yards and five touchdowns for 3-4 Ravenna.

This young man has talent, just like Dad did in his McCook Bison playing days.

Junior Ben Warren gained 81 yards on just 6 touches and sprinted for a 39 yard score, while QB Dilan Krause added 71 more yards on 11 totes. Krause also reached perfection in the passing department, completing 5 of 5 aerials for 68 yards. And do not forget, super coach Guy Rosenberg has future Husker Teddy Prochazka (6-9, 295) and center Isaac Zatechka (6-4, 265) in that offensive line clearing those openings.

On defense, 6-1, 225 pound lineman Sam Hoskinson was just superb, logging 9 tackles with 7 of those being solo stops. Bo Wieseler made 7 stops with 3 solos and 2 TFL, while Maverick Noonen enjoyed the best game of his 2020 season, making 5 solos crunches with 2 tackles for losses.

Carson Crouch, son of Heisman Trophy winner Eric Crouch, was 3 for 3 on PAT kicks. So was Blake Daly, who sailed 2 of 2 through the uprights.

*Dexter Larsen-Blair - Senior two-time thousand yard rusher exploded for 250 yards on 23 carries and a Blair school record SIX touchdowns in the Bears 54-14 win over Omaha Gross Catholic. Dexter’s touchdowns came on runs of 36, 1, 47, 3, 1 and 8 yards and were in the books by the end of the 3rd quarter.

Larsen also caught a 26 yard pass and made 5 tackles on defense. For the year, Larsen is at 816 yards (15 TDs) and also hit a Career rushing mark of 3,500 yards right on the nose in that Gross win.

*Kale Bird-Bennington - The Bennington QB had a career night in the Badgers 42-34 win over defense minded Elkhorn. Bird completed 15 of 21 passes for 219 yards and a touchdown. The senior star also ran the football 13 times for a fat 180 yards and an additional two TDs for a whopping Total Yardage total of 399 yards. That’s unheard of against Elkhorn High in 2020, who had been giving up just 234 total yards per game.

So, how good is first year Badger quarterback Kale Bird, the 5-10, 165 pound senior? Well, consider this: In seven games, Bird trails only Hastings Jarrett Synek in Class B passing yardage. Through those seven outings, with an only loss to powerhouse Omaha Skutt (28-25), Kale is 88 of 142 in the passing department, good for 1,492 yards and 15 touchdowns. It doesn’t stop there.

You definitely do not want Bird taking off out of that Bennington backfield either, as witnessed by his 673 yards rushing on 90 carries and 9 touchdowns.

Bird has one of the quickest plant and cut moves I’ve seen, regardless of class, this season. Bird;s runs almost look like a video that skips a frame or two and sees him at one location on the field, then the next position you see the dude 4 or 5 yards yards downfield without you the viewer, knowing what just took place. Quick as a wink.

This was the 20th win in a row for super coach Joe Anderson’s #1 and defending C-2 champion Knights. Eleven different backs carried the football in the win. QB Grady Gatewood also got into the scoring parade with his 50 yard scoring strike to Carson Thomsen. Both Thomsen and Thiele, incidentally, got off 44 yard punts in this contest and both picked off Tate Thoene passes.

And that Oakland-Craig defense! Such pure, solid tacklers. All-State monster linebacker Mike Brands is just a brutal force from his position. He made 9 stops in that Cedar Catholic game, all SOLO TACKLES. Ditto for Coulter Thiele, who made 5 stops with 5 solos. This bunch held HCC’s terrific Easton Becker to just 30 yards rushing.

Honestly, I would like to know who is going to prevent this Oakland-Craig team from winning a 2nd straight C-2 State Championship?

*Hunter Haughton-Johnson County Central - Former Fullerton standout, now at Johnson County Central, had a career night in the Thunderbirds 58-36 win over Humboldt-Table Rock-Steinhauer. The 5-10, 160 pound senior QB/DB rushed 21 times for 207 yards and 4 touchdowns, completed 5 of 8 passes for 97 yards and another score and caught a pair of passes for 85 yards. Hunter also converted 5 PATs, passing for 4 and running the remaining one in himself.

At the end of the contest, Haughton had racked up 467 Total Yards, doing about everything a player can do on the gridiron. I’m not too sure Hunter didn’t stripe the field before the game and cook a meal for his family after the game.. Defensively, the shifty Haughton led JCC with 13 tackles (6 solos) and pirated two Titan aerials, taking one to the house for a 68 yard Pick 6.

Smith threw only 13 times against Sutton, but completed 9 of those for 189 yards and 4 touchdowns. Not a bad night's work when every other pass goes for a score. The veteran senior field general also ran 10 times for 79 yards with a scoring run in there.

Zach’s four touchdown passes were caught by four different receivers, Tommy Stevens (65 yards), Kelen Meyer (22 yards), Quinton Ries and John Derisio. Ries led all receivers with 79 yards on 5 receptions. Tommy Stevens had to work hard to gain his 74 yards on 23 carries, but did move the ball downfield for the C-2, #2 rated Chanticleers.

Ries was also a force on defense, making 7 tackles (4 solos), but Garret Kluthe led the Ord “D” with 11 stops, which included 3 solos. Big Riley Setlik and freshman Talan Bruha each recovered fumbles in the contest, which was a replacement game, and a great one at that.

*Eli Larson, Tommy Wroblewski, Brenden Knapp, Jaxson Klinginsmith-St. Paul - The Wildcats survived Kale Jensen’s 39 of 66 passes for 303 yards and 4 touchdown barrage last Friday and are probably a better team for having gone through it. St. Paul hung on to best Central City 40-29 with Larsen and Tommy Wroblewski once again providing the offensive fire power.

Eli Larson rushed for 154 yards on 24 carries with TD runs of 2, 20 and 5 yards, caught a 30 yard scoring pass from Brenden Knapp (actually a hook and ladder reception), and made 6 tackles on defense. Wroblewski also ran the ball twice with one being a 66 yard TD gallop. He also caught 3 passes for 77 yards, one of which was a 38 yard scoring catch. Tommy also led the St. Paul defense with 12 tackles, TEN of which were solo stops.

QB Brenden Knapp was a perfect 5 for 5 in the passing department, piling up 115 yards and a pair of scoring tosses, while Jaxson Klinginsmith made 9 tackles defensively, ALL solos, with FIVE going for losses.

Eli Larson continues to inch toward that 5,000 Career Rushing Yards mark. Eli is currently at 4,856 yards and needs just 144 more to become just the 20th eleven-man football player in history to reach that coveted mark. Larson has also gained all but 199 yards of that 4,856 big ones during the past three seasons (30 games). Incredible!

*Micah Moore-Fremont - It matters not whether Fremont wins or loses, running back Micah Moore is going to get his yards. In the Tigers 41-17 loss to 3rd rated (Class A) Millard South, Moore ran for 134 yards on 21 carries, raising his 2020, seven game total to 928 yards (9 TDs).

Fremont is enjoying its one of its finest seasons in years, posting a 5-2 record thus far with one regular season game remaining (a replacement game at home vs. Millard North) before playoffs begin (Week 9, all teams qualify).

So, Micah Moore has at least two games left to get the 72 remaining yards he needs to get his 1000 yard rushing season. If you recall, Moore ran for 799 yards as a sophomore.

*The Vikings Defense, Rushing Offense-Waverly - The Waverly defense was ready for Plattsmouth and Christian Meneses last week. In Waverly’s 36-0 win over the Blue Devils, that stingy Waverly “D” allowed just 129 yards of total offense and held Meneses to 22 yards on 29 tries. On offense, it was the same ground game nightmare for Viking opponents, as FB Evan Canoyer ran for 98 yards on 9 carries with a 66 yard TD dash. HB Zane Schawang was not far behind with his 90 yards on 14 touches and a 42 yard scoring run. QB Cole Murray added 84 yards on just 6 totes with an electric 78 yard scoring journey in there.

Big Trevor Brown, the future Nebraska player, was a monster with his 9.5 tackles, 8 of which were for stinging losses. He also had a sack and a brutal fumble recovery where he blew in like a raging bull, ripping the ball free before the ball carrier even knew what hit him. I’ll bet that dude had nightmares about Mr. Brown all night long last Friday.

*Brian Turek-Hemingford - Zipped to the top of the Nebraska high school football rushing charts with his 299 yard, seven touchdown performance against Bayard last week. Turek, who ran for one yard short of 300, did so on 39 carries. Turek now has 1,336 yards and 25 touchdowns through 7 games this Fall for the 5-2 Bobcats.

*Isaak Norman, Brady Cook-Fullerton - The 6-1, 165 pound Norman had a career night in the Warriors 46-40 loss to Palmer. Norman, who was a running back a year ago, stepped into the quarterback gig this Fall when Hunter Haughton transferred to Johnson County Central.

In that Palmer game, the senior QB completed 20 of 28 passes for 273 yards and a touchdown. Norman also rushed the ball a grueling 31 times for 191 yards and 4 more touchdowns. That gave Isaak a monster 464 total yards with five touchdowns in the football game.

On the Warriors defensive side, sophomore Brady Cook was sensational in that Palmer loss, recording 15 tackles with 13 solo stops. He also averaged 40.5 yards on two punts. For the season, the sure tackling Cook has made 56 tackles, with a monster 43 solo stops.