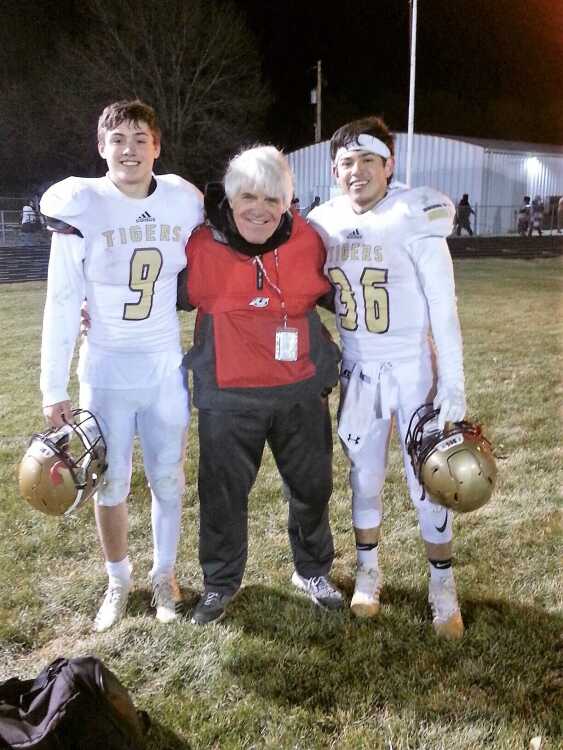 Dundy County/Stratton's Quade Myers (L) and Serbando Diaz (R) are two of Eight-Man football's finest runners, having compiled four one thousand yard rushing seasons between the two of them.

Dundy was up 30-0 after a quarter, 62-0 by halftime against Perkins, thus eliminating any chance either Quade or Serbando would see second half action.

In two games, two time 1000 yard rusher Diaz has 405 yards, followed by Myers with 310. In their first two games of the 2020 campaign, the No.1 rated Tigers have scored 18 of their 19 total touchdowns on the ground, but opponents know better than to think Dundy cannot utilize the forward pass with Quade Myers back there in the Gun.

By the way, Dundy County/Stratton, who had their season opener with Julesburg, Colorado (five time 8-Man champion) cancelled because of Covid, has played only two games thus far in 2020. The Tigers host undefeated Hitchcock County this Friday, a team that has posted 68-6, 78-26, and 58-6 scores in their first three outings of the year.

*Pierce Backfield - Bluejays backfield churned up 415 yards on the ground in a 48-13 win over a very good North Bend Central team. Tyler Race led the way with 106 yards on 7 totes which included a touchdown run of 2 yards. David Dale followed with 86 on 8 touches with TD runs of 17 and 24 yards, QB Abram Scholting was next with 42-9 carries with a 25 yard TD run, then Ashton Schweitzer with 39 yards on 4 totes, TE Ben Brahmer had 3 runs for 34 yards, Garrett Meier ran three times for 31 yards, then Logan Moeller (24 yds-2 totes), Michael Kruntorad-2 carries-23 yards (17 TD), Zach Collison 3 totes-23 yards and a 4 yard TD run, and Dawson Watts, who had one touch for 7 yards.

Oh yeah, Colton Fritz brought a kickoff back 55 yards for another Pierce score. On defense, Brahmer and Race both pirated NBC passes and Logan Moeller had 5 solo stops.

Pierce is rated #2 in C-1 this week behind Wayne. The two rivals meet the final game of the regular season on Friday, October 23rd in Wayne.

*Tyson Denkert-Kenesaw - Junior All-State QB tore up Fullerton’s turf with 261 yards on 24 carries and 5 touchdowns in the Blue Devils 44-14 win over the Warriors. Denkert’s scoring runs covered distances of 38, 53, 3, 34 and 12 yards, as Kenesaw remained undefeated and 5th rated in the OWH Eight-Man One ratings.

Denkert is also working on a string of 100 yard plus rushing games that is up to 11 straight.

*Tanner Pfeifer-Humphrey St. Francis - Completed 9 of 14 passes for 237 yards and 3 touchdowns in the Flyers surprising close 44-38 win over Palmer. Haustyn Forney who had 107 yards rushing, caught a pair of Pfeifer’s TD passes covering 38, 40 yards. Forney had an 18 yard TD gallop in the contest along with Jaden Kosch, who ran one in from 53 yards out against the pesky Tigers.

*Jack Wemhoff-Elgin Public/Pope John - The 5-9, 174 pound sophomore back jetted for 307 yards on 26 carries and five touchdowns with five two point PAT runs, in the Wolves 46-31 win over High Plains. Wemhoff also caught one pass for 32 yards and made 16 tackles on defense (8 solos/2 TFL).

If you think Jack Wemhoff might be a one trick pony, forget that. The statement “promising sophomore” may be an understatement concerning this kid. He already has 473 yards rushing and 35 tackles after three games. 1-2 Chambers/Wheeler Central is up next for Elgin P/PJ.

*Jacob Jones-Millard West - 6-3, 185 pound senior quarterback was a sparkler in the Wildcats 31-12 loss to Millard South. Jones completed 14 of 26 aerials for 260 yards and 68 yard scoring strike to Nathan Peterson. That brought the ‘Cats to within 21-12 of Millard South after three quarters of play. Jones also ran for 61 yards on 18 carries with a one yard scoring blast. Even Meyersick was the Wildcats leading receiver, catching 5 Jones passes for 112 yards.

*Koa McIntyre-Fremont Bergan - Junior speedster quarterback continues to pile up those stats as Archbishop Bergan continues to pile up those wins. In the Knights 46-20 win over Lincoln Lutheran, McIntyre completed 16 of 23 passes for 169 yards and a pair of touchdowns and ran 16 times for another 179 yards and two scores. And you knew this had to be coming, Koa had an interception in the contest.

The Knights are now 3-0 and rated #4 in Class C-2 (OWH) and will travel to Omaha to face a winless Concordia team this coming Friday.

*Russell Martinez-Grand Island Central Catholic - Completed 12 of 17 passes for 252 yards and three touchdowns in the Crusaders 42-12 victory over Class C-2’s 9th rated Centennial. It was GICC’s third consecutive game against rated opponents and more importantly, a win on the very own football field, a first in the 64 year history of the school.

Martinez three scoring strikes were gathered in by Marcus Lowrey (73 yards), Brayden Johnson (15 yards) and All-State candidate Isaac Herbek (54 yards). Herbek incidentally, was just back in action after sitting out two weeks due to a suspected exposure to COVID 19.

The Crusaders were forced to find another place to play their home football games when the GI Public Schools announced they would not allow visiting fans at any game contested at Memorial Stadium, the place GICC has hosted their home contests since 1956. The next home appearance for the Crusaders will be on Friday, September 25th when C-2, 2nd rated Ord comes to visit the new “Sader Sod”, Central Catholic’s new football home.

And…...one of Russ Martinez incredible runs during the Centennial made the HUDL NATIONAL Plays -of-the-Week, grabbing the number 3 spot. During the play, Martinez hurdles a Centennial defender, turns a complete somersault in mid-air, lands on his feet and continues downfield for another 40 yards.

Division One kicking prospect Kelen Meyer also pirated a Cayden Cunningham pass, along with Gage Racek, who intercepted a Catholic pass on the Ord 2 yard line with less than a minute to go in the game.

*Keegan Benson-Arapahoe - The Warriors unleashed a 394 yard ground attack in their 50-14 win over Blue Hill. Leading the way was 6-2, 190 pound senior Keegan Benson, who ran the ball 32 times for 211 yards, which included a 27 yard scoring run. Junior Wyatt Jenkins also surpassed the hundred yard rushing mark, going for 105 yards on 12 carries with TD sprints of 47 and 6 yards.

Junior quarterback Tristan White added 74 yards on 18 carries and got things rolling by rushing for three touchdowns in the first quarter of action. White’s TD bursts were shorties, coming from 3, 3 and 2 yards out.

*Eli Small-Elkhorn South - The 6-1, 185 pound sophomore linebacker made an incredible 22 tackles (10 solos) in the Storm’s 21-14 win over Millard North. The week prior, the vicious hitting Small had 8 solo stops in Elkhorn South’s 17-14 loss to Millard South.

Remember, Small is one of the finest young baseball talents in Nebraska, and the nation for that matter, already receiving an offer and committing to Kentucky to play Division One baseball. But for now, Eli will be content in blowing up opponent’s ball carriers.

*Braden Schmeckpeper, Isaac Kracl-Crete Cardinals - The sizzling junior duo accounted for 362 yards of the 444 total yardage Crete laid on Seward in the Cardinals 27-21 win last week. All Quarterback Braden Schmeckpeper did was complete 8 of 10 passes for 121 yards and rush for 110 yards on 23 carries with TD runs of 1 and 20 yards in the 1st quarter, giving Crete a 13-7 lead.

Isaac Kracl actually led the ground attack with 131 yards on 20 totes and it was his 32 yard touchdown run that put the Cardinals up for good with 8:39 left in the 4th quarter. Kracl also caught a pair of Schmeckpeper passes for 66 yards.

Another big contributor in the game was Tad TeBrink, who rushed 11 times for 82 yards and a 1 yard touchdown blast that pulled Crete back into A 21-21 deadlock with Seward 6:57 left in the 3rd. TeBrink also had three pass receptions for 37 yards in the game.

*Blake Brown-Wakefield - The 155 pound senior quarterback is running wild with opponents keying the the great Justin Erb. In the Trojan’s 50-14 win over Stanton, Brown raced for 177 yards on 17 touches with Five touchdown runs covering 1, 54, 15, 3 and 3 yards. Brown also threw 2 passes, completing both with one going for a 21 yard TD to Cody Johnson.

No, Stanton did not shut down Justin Erb, who ran for 1,510 yards and 32 TDs in just 8 games a year ago. Justin still managed 128 big ones on 23 carries and scored from 2 yards out in the game. The splendid senior still has 389 yards in three games this season.

Remember though, Wakefield is ineligible for the playoffs this season and Eight-Man One and will have only 8 games to make some noise. The Warriors will have a shot to do that big time this Saturday at 1:00 when they play Lutheran High NE at Veterans Complex in Norfolk.