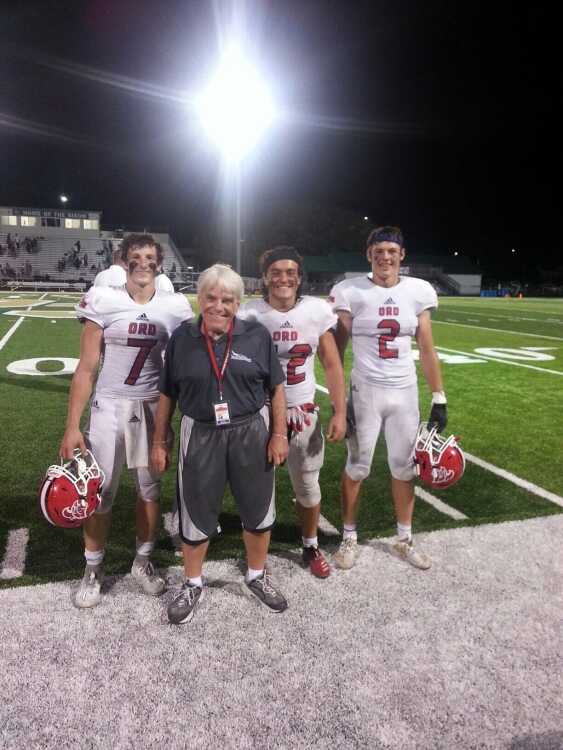 ***Kelen Meyer, Tommy Stevens, Zach Smith-Ord - Kelen Meyer, one of Nebraska’s premier kickers, booted a 58 yard field goal, one of three on the night, in the Chants 37-20 win over Central City. The kick, which had 3-4 yards to spare, tied the Class C-2 record for the longest field goal. Meyer’s three field goals also equalled a C-2 record for most FGs in a game.

Ord and Meyer lined up to attempt a 59 yard field goal earlier in the contest, only to have a 5 yard penalty whistled against them. The Chants then decided to punt instead of Meyer attempting the 64 yard boot. The 6-2, 195 pound senior also was 4/4 on PAT attempts and averaged 44.7 yards a punts for the evening, with a 55 yard rocket being his longest.

The Ord star also caught a pair of passes from QB Zach Smith, good for 24 yards, made four tackles on defense and pirated a Kale Jensen pass to top it all off.

Hard running Tommy Stevens ran for 164 yards on 22 carries and scoring jaunts of 12, 2 and 21 yards, despite sitting out most of the second half with a tender ankle. Stevens, who rushed for 1,521 yards and 16 TDs a year ago, already has 329 big ones with 7 touchdowns two games into the 2020 season.

Veteran Ord quarterback Zach Smith rushed for 84 yards on 15 carries and scored a touchdown from 4 yards out. Oh, and incidentally, that Ord offensive line can flat out run block, led by big 6-4, 295 pound Riley Setlik.

*Hyatt Collins-Adams Central - Ladies and gentlemen, meet Adams Central’s new running threat, Hyatt Collins…...and he’s just a sophomore. All the 5-10, 175 pound 10th grader did last week was go into Wahoo’s house and rush for 173 yards on 35 carries and hit paydirt from 30 and 17 yards in the Patriots 24-7 win over Mighty Wahoo. It was Wahoo’s first home loss since 2016.

How do you go to Wahoo and beat the defending C-1 champions 24-7, let alone hold the Warriors to 105 yards rushing and 100 passing? Nice game plan, Coach Mulligan.

Anyway, about Collins. Last year as a freshman, he did appear in 7 games, carrying 16 times for 164 yards and 3 touchdowns. But when the guy got in the Patriots 2020 season opening 35-0 win over Holdrege and carries the ball 4 times fo 57 yards and two of those are touchdown runs (19, 41 yds), you know something is up.

All throughout Adams Central’s rich football history, there has always been a future star running back waiting in the shadows of the current thousand yard rusher for their opportunity to shine.

*Jarrett Synek-Hastings High - All-State candidate completed 14 of 19 passes for 269 yards and 5 touchdowns to 5 different receivers in the Tigers 45-6 stomping of Scottsbluff…... IN Scottsbluff. Synek also ran 5 times for 47 yards and a touchdown.

Jarrett’s scoring passes were caught by Gareth Jones, who finished with 3 catches for 58 yards, Braden Kalvelage (2 for 53), Beau Dreher (1 TD catch of 43 yds), Ryan Bauer (1 TD catch of 28 yds) and Carson Shoemaker (2 for 24). The leading receiver for the Tigers was Austin Nauert, who hauled in 5 Synek aerials for 63 yards and surprisingly no touchdowns.

In just three game Jarrett Synek has completed 59% of his 66 passes for 842 yards, 13 TDs and not one interception. That raises Synek’s 23 game career passing numbers to 3,561 yards with 45 touchdowns and just 4 picks. The dude can flat out sling it.

*Jake Stoner-Fillmore Central - Second straight game for the senior Swiss Army Knife player to compile over 290 total yards. This time the unlucky opponent was Syracuse. In Fillmore’s 27-7 win over the Rockets, Jake Stoner ran 17 times for 161 yards and three TDs, caught 4 Keegan Theobald (sophomore) passes for 28 yards and compiled 102 yards in punt returns which included a nifty 65 yarder that went for a score.

Jake Stoner has done it all for a Fillmore Central team that has posted records of 1-8, 1-8, 3-6 during his career and are currently 1-1 as we speak. Despite those records, Stoner has accumulated 4,113 Total Yards in 25 career games, including a 1000 yard rushing year in 2019 (1,001 yards). Stoner was even called on to play quarterback his sophomore and junior seasons for the simple reason he’s that kind of all-around football talent.

Here is my wish for this day. That Jake Stoner, and his Fillmore Central football brothers (especially Koby Head) win enough games in 2020 to make the post season. Lord knows Jake Stoner has earned it.

*Abram Scholting, Pierce Bluejay Backfield - The fabled Three Horsemen have graduated and left their mark at Pierce, but the new regime is doing just fine, thank you. In the Pierce 41-21 win over a fine Columbus Lakeview team, sophomore QB Abram Scholting completed 9 of 16 passes for 206 yards and 3 touchdowns.

Those backs just keep coming at you and the offensive line is deeper yet to wear you down. How good is that Pierce coaching staff for getting a ton of kids to buy in every year?

*Jake Erwin-York - Dukes quarterback made things rough for Alliance by rushing for 212 yards on 25 carries and scoring runs of 1 and 84 yards in York’s 20-0 whitewashing of the Bulldogs. Erwin also escaped for a non-scoring 83 yard dash in the contest and made 11 tackles on defense for super coach Glen Snodgrass and his 2-0 Dukes squad.

Just in case you missed it, Jake Erwin is a terrific football talent that shows up to play every time he puts the pads on.

**Aiden Kuester, Julien Hearn-Neligh-Oakdale - Sophomore Aiden Kuester and senior Julien Hearn continue to be the hottest/pass Eight-Man duo in the state of Nebraska. In the Warriors 48-22 win over Plainview last Thursday, the 6-0, 185 pound Kuester completed 17 of 28 passes for 206 yards with a pair of touchdowns, rushed 22 times for 82 yards with scoring runs of 2, 7, and 5 yards, made 7 tackles and pirated a pass on defense, and averaged a robust 43.0 yards per punt on half a dozen boots.

Julien Hearn, a returning All-State, 1000 yard receiver, caught 8 Aiden Kuester passes for 121 yards and a touchdown, rushed 4 times for 52 yards and another score, made 7 tackles and returned a kickoff for 9 yards.

Neligh-Oakdale, who is coached by former Fremont Bergan legend Ron Beacom, is rated #7 in Eight-Man One and is headed for a monster matchup with #2 Burwell this Friday in Neligh.

*Zach Lewandowski, Jesse Drahota-Ravenna - Quarterback Zach Lewandowski completed 12 of 13 passes for 149 yards and a 54 yard TD strike to Hunter Douglas in the Bluejays 30-14 win over Ansley-Litchfield. Lewandowski also rushed 13 times for 44 yards and a pair of scoring runs covering 3 and 10 yards, as Ravenna notched it’s second straight win to open the 2020 season. Lewandowski has now completed 27 of 32 passes for 381 yards and 5 touchdowns with NO interceptions in two games.

Jesse Drahota bolstered the Ravenna ground game with 169 yards on 28 totes and a two yard scoring run in the win.

*Tanner Wood, Javier Marino, Mariano Lesiak-High Plains - In a 51-13 win over Omaha Christian Academy; Wood ran for 136 yards on 9 carries, Mariano added 113 yards on 15 totes and Mariano Lesiak made 13 tackles on defense to lead the Storm to their first win of 2020 season.

*Morgan Rump-Blair - The Bears have certainly made the right decision in naming 5-10, 165 pound senior Morgan Rump the starter at Quarterback. There was some summertime talk swirling around the Blair football camp that the two-time 1000 yard rusher Dex Larsen was going to take over the quarterback slot, but Rump took care of that so Larsen could keep mowing over defenders from his running back slot.

In Blair’s 49-10 win over Elkhorn Mt. Michael last Friday, Morgan Rump hit 12 of 19 passes for 219 yards and 4 TDs. He also rushed 9 times for 33 yards. Rump’s TD tosses were handled by leading receiver Nolan Osterhaus, who had 4 catches for 97 yards and TD grabs of 14, 34 and 25 yards, and Dane Larson, who caught a 42 yard scoring strike, one of a pair of receptions totalling 59 yards.

Dex Larsen did his usual thing by running for 98 yardson 20 carries and a touchdown.

If you think Morgan Rump may have just experienced a lucky night passing the football, think again. In two games, Rump has completed 24 of 39 passes for 437 yards and 4 TDs. And with Dex Larson, the two time thousand yarder in that Bears backfield, this 2020 Blair team is simply a very dangerous Class B football squad.

Pleasanton, the defending D-2 runner-up, is currently rated #6 by the Omaha World-Herald and can attack you with a ton of weapons. It also helps to have one of the best football coaches in state in Ricci Westland.

*Cole Faessler-Bridgeport - The 5-9, 175 pound runner was too much for Centura in Bridgeport’s 40-0 win over the Centurians. Faessler bolted for 170 yards on 19 carries with touchdown gallops of 55, 32 and 16 yards in the big win out West.

Faessler, who ran for 844 yards and 12 TDs a year ago, has already compiled 290 yards rushing and 5 TDs in the Bulldogs first two games. Bridgeport will be in out in our area this week when they travel to Gibbon to meet the 2-0 Buffaloes.

**Eli Larson, Tommy Wroblewski-St. Paul - Larsen ran for 137 yards on only 7 touches with a pair of touchdowns in the Wildcats 41-6 win at Broken Bow. The 2000 yard rusher now has 291 yards and 5 total touchdowns in just two games. Eli also had 10 tackles on defense for the ‘Cats.

Speedy Tommy Wroblewski carried the ball just 4 times (Jet Sweeps?) but gained 109 yards and escaped for touchdown runs covering 55, 32 and 16 yards. And, lest we forget, St. Paul has a big one coming up this Friday when they travel to Kearney to meet Kearney Catholic.

*Ty Nekoliczak-Central Valley - Another big night for the 5-8, 140 pound senior quarterback. In Central Valley’s 52-16 victory over Palmer, Nekoliczak connected on 9 of his 12 passes for 158 yards and 2 TDs and rushed 7 times for 86 yards and 3 more scores.

In his first two games, Ty Nekoliczak has completed 22 of 30 passes for 424 yards and 8 TDs with no interceptions, gained 119 yards on the ground with four more scores, made 10 stops on defense, returned a punt for a score and piled up 543 total yards.

**Collyn Brummett, Garrett Tachovsky-Dorchester - The Six-Man football pair combined to rip the Pawnee City defense for 447 rushing yards in the Longhorns 48-37 win over the Indians. Brummett led the way with 290 yards on 25 carries with scoring runs of 59 and 19 yards. Tchaikovsky added 157 yards on 22 touches with TD runs of 6, 5 ans 3 yards and made 15 tackles on defense, 12 of which were solo stops.

Collyn Brummett has 397 rushing yards after two games for 2-0 Dorchester.

1-1 Paxton, rated #9 in Six-Man football, is coached by former Grand Island Senior High All-State football and basketball standout Scotty Jorgensen. Paxton’s, whose loss (25-12) came at the hands of 5th rated Cody-Kilgore, has a week off before facing 3rd rated Arthur County September 18th on the road.