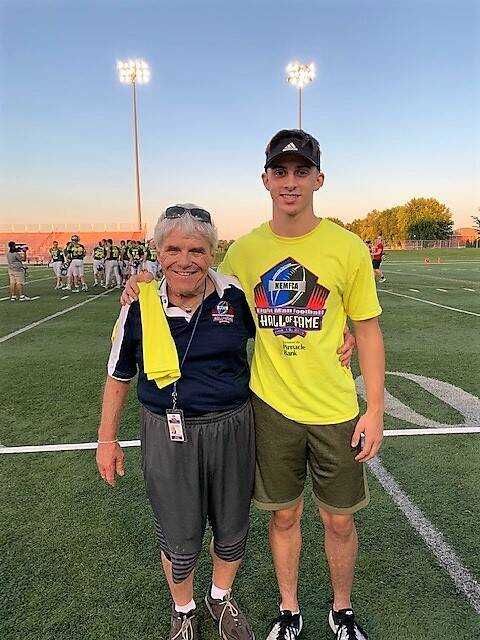 *Touchdown Tommy McEvoy-Clarson-Leigh - Tonight, I give the center stage spot to a young man, a friend of mine who had ONE carry last Friday. ONE carry for 33 yards. ONE carry, ONE Touchdown from 33 yards away in Clarkson-Leigh’s 54-8 win over Class D-1, 9th rated Elmwood-Murdock.

Tommy’s touchdown came in the first quarter, one among many other Clarkson-Leigh scores to come in the contest. But Tommy McEvoy’s ONE Touchdown carries with it, a cruel twist of fate something that just rips the heart right out of your football soul.

You see, Tommy sat out the entire 2019 football season, his junior year, recuperating form a torn ACL in his left knee. That comes after a sensational Sophomore campaign at Clarkson-Leigh that saw young Tommy rush for 1,708 yards on 151 carries and 30 touchdowns.

Only the mighty Howells-Dodge kept Tommy McEvoy out of the end zone in 2018, holding the sophomore to 88 yards in 13 carries on that opening night. The next 8 games, McEvoy scored 30 touchdowns on 136 touches.

That’s a Touchdown every 4.5 times Tommy McEvoy touched the football. Not bad for a sophomore.

I did not hesitate for an instant to put him in my 2018 All-State Class D-2, Eight-Man backfield with QB Cole Fossenbarger of Johnson-Brock and RB Lane Edis of Mullen, who ran for 6,969 yards in his career.

Tommy then suffered an injury in the spring of his sophomore year that required months of rehab. The very day he was cleared to get back into workouts preparing for his junior football season, he tore is right ACL. Tommy McEvoy would be forced to miss his entire junior year in football, basketball and track.

Despite this serious setback, the Clarkson-Leigh senior received attention from several Division One schools and even more D2 football programs, eventually landing a D1 offer from South Dakota University the last week in June this summer.

In this year’s season opener, a matchup of #1 Clarkson-Leigh and #2 Cross County, Tommy ran for 107 yards on 20 carries with two TDs, despite drawing heavy attention from a great defense.

Then last Friday, in Clarkson-Leigh’s win over Elmwood-Murdock, Touchdown Tommy made it look easy, as he had 30 times two years ago. He bolted through the line untouched and pulled way for 33 yard touchdown, pulling away from the defense with every stride

Then the unthinkable happened. McEvoy went to make a cut on his second carry and tore the ACL in his other knee (left).

This is a sad twist of fate for a youngster like Tommy McEvoy, who has worked so diligently to get back on the field. His Dad, Bob McEvoy is on the Clarkson-Leigh coaching staff, which makes it even tougher to handle.

I know there are other Tommy McEvoys out there who are fighting similar situations, some I haven’t heard about, but in just in case that this may be the final carry of Tommy’s far too brief football career, this one is for you my friend………

………...and that’s why they will always call him...Touchdown Tommy McEvoy.

*Serbando Diaz and Dundy County O-Line - Serby goes nowhere with that Dundy offensive line, and they were movin’ ‘em out in the Tigers 68-12 win over Bertrand last Friday. Diaz went off for 237 yards on 21 carries and 6 touchdowns covering 7, 5, 10, 2, 24 and 48 yards as the Tigers scored 9 times on the ground.

QB Quader Myers, a two time 1000 yard rusher and just a junior, added 86 yards on just 5 carries and a touchdown. Defensively, Bobby Schneider, Corbin Horne and Lincoln Waters made interceptions for the Tigers.

After exploding for 313 yards on 38 carries in Battle Creek’s opening game 58-50 win over Central City, Bode turned in another top notch performance with his 181 yards on 27 totes.

*Dominic Rezac, Cole Payton-Omaha Westside - Westside unveiled Dominic Rezac as the main man in the Warriors backfield last Friday and the 6-1, 175 pound junior made an immediate impact against Kearney. Rezac took off for 235 yards on 25 carries and scored four times from 3, 3, 1, and 48 yards out in the Warriors 47-21 win over the Bearcats.

Omaha Westside quarterback Cole Payton was simply outstanding in the contest, completing 14 of 18 passes for 192 yards, which included a pair of scoring tosses (40, 32 yds) to Minnesota commit Avante Dickerson. The amazing Dickerson also hit the end zone on with a 12 yard run with a minute before halftime, giving Westside a 21-7 advantage going into intermission.

How surprising was the emergence of Dominic Rezac? In Westside’s opening night 42-0 win over Creighton Prep, he carried twice for 39 yards. How surprising was Rezac’s explosion in the Kearney game to head coach Brett Froendt? “He’s just getting started” was Froendt’s quote following the win over the Bearcats.

Now that’s downright frightening considering how much talent Omaha Westside already has in the arsenal for 2020. And how many times did Dominic Rezac carry the ball in 2019? A total of 8 times for 52 yards during the opening two games for the Warriors and not once after that. Wow, what a difference a year makes.

*Brody Mickey, Discoverer Defense-Columbus - The 5-10, 155 pound junior was a howling success in his debut as Columbus High’s starting quarterback. Mickey, taking over for regular starter CJ Fleeman, was a picture perfect 12 for 12 passing for 138 yards in the Discoverers 42-0 victory over arch rival Norfolk. The cool-handed Mickey also rushed 9 times for 66 yards and reached the end zone with runs of 16 and 30 yards.

Brody Mickey actually took over for CJ Fleeman in the Discoverer’s 13-0 win over Scottsbluff a week ago with two minutes left in the 2nd quarter. The move was precipitated by a season ending right knee injury, suffered by Fleeman.

Even better was the fact Brody Mickey actually took took a bunch of snaps for the Columbus offense this summer when Fleeman was off playing club baseball, so the junior must have felt like he was ready if needed.

And how about that Discoverer defense? Two games, two shutouts with 194 total yards allowed against Scottsbluff and 72 total yards allowed in the Norfolk game. Talk about a group effort, 19 different Columbus defenders logged tackles in that 42-0 win over Norfolk, with not one player making over 4 tackles. Now that’s a Team effort.

The 100 plus rushing game is the second straight for Edeza, who rushed for 104 yards and a 90 yard touchdown sprint against Class C-1, #2 Wayne a week ago.

*Koa McIntyre-Fremont Bergan - Did much of the major damage to GICC in Began’s 47-6 win over the Crusaders, a team the Knights hadn’t met since defeating them (20-12) in the 1979 C-1 championship game.

The powerful, high speed McIntyre ran for 131 yards on just 11 touches and three touchdowns against GICC. The junior whiz only competed 4 of 14 passes, but two went for scores and a total of 138 yards through the air. McIntyre also made 5 tackles on defense and has averaged 43.3 yards a punt, which included a short 33 yarder vs. GICC.

The Archbishop Bergan star has now rushed for 298 yards in the Knights first two contests.

*McGinnis Schneider, Lincoln Southeast “D” - The Knights defense was absolutely stifling in Southeast’s 35-5 win over Lincoln Southwest. The Knights limited the Silverhawks to just 101 total yards and 6 first downs in a game that saw 27 different Lincoln SE players have at least one tackle or assist. Think about that for a minute.

McGinnis Schneider, the Knights 185 pound senior quarterback, completed 12 of 21 passes for 235 yards with pair of aerial scores. McGinnis also ran the ball 12 times for 49 yards with a touchdown in the lopsided win.

*Jaden Jurgensmeier-Grand Island - The first year starting Islander quarterback completed 16 of 39 passes for 300 yards and a pair of TD tosses to Brandon Fox (25 yards) and Marcus Holling (60 yards) in the Islanders delayed season opening 24-7 win over Lincoln Pius X. The 6-0, 175 pound senior hit 7 different receivers in the win, including Kamden Aiden, who led all receivers with 6 catches for 129 yards.

*Gabe Escalante, Art Escalante-Winside - The Escalante boys were definitely thorns in the side of Cedar Bluffs last Friday night. During the Wildcats 56-20 win over well, the other Wildcats, Gabe Escalante ran for 114 yards on just 8 carries and scored touchdowns from 35 and 56 yards out. Gabe also caught three scoring passes from Art covering 41, 32 and 57 yards.

Winside quarterback Art Escalante completed 3 of 5 passes for 138 yards and that trio of TDs to Gabe. The Escalantes were also menaces on defense with Art logging 9 tackles and Gabe recording five. Both recorded sacks in the route.

*Kale Bird-Bennington - Well, the Bennington QB didn’t throw for 300 plus yards in the Badgers 31-18 win over Aurora, but he did complete 11 of 21 tosses for 210 yards and three touchdowns and a clean slate as far as interceptions were concerned. Bird also carried the ball 12 times for 92 yards and a TD, marking himself as a bonafide Dual-Threat quarterback for 2020.

The 5-10, 165 pound senior has flourished in his first season as starting quarterback, leading Bennington to a 2-0 record, while compiling 669 total yards (367 passing, 307 on the ground). The Badgers are rated #6 in Stu Pospisil’s latest Omaha World-Herald Class B ratings.

*Levi Belina-Howells-Dodge - Rushed for 134 yards on 20 carries and scoring runs of 15, 45 and 5 yards during the first half in the Jags 50-0 trouncing of Shelby/Rising City. Senior QB Jacob Tomcak also threw just 5 passes, but 4 of those for 91 yards and scoring tosses of 31 yards to Brittin Sindelar and 19 yards to Aiden Meyer in the game that saw the Howells-Dodge offensive starters rest in the 2nd half.

Levi Belina by the way, now has 250 rushing in two games.

Future Hall of Fame Coach Mike Spiers Howells-Dodge team led 42-0 at the half and allowed just 93 total yards in the contest.

*Jimmy Allen-Crofton - 5-9 182 pound junior tore up the Twin River defense with his 194 yard rushing effort in Crofton’s 48-7 win over the Titans. Taking handoffs out of that familiar tight, double-wing Crofton formation, Allen needed just 14 carries to reach his rushing total for the evening, which included a 15 yard scoring dash. Seven different Crofton players scored in the Warriors romp over Twin River.

*Jacob Diessner-Spalding Academy - Six-Man star tore it up once again in the Shamrocks 59-14 win over Silver Lake. Diessner scooted for 178 yards on 24 carries and 4 touchdowns, completed 5-9 passes for 163 yards and two more scores and made 12 tackles on defense, 11 of which were solos.

So, after just two games, Jacob Diessner has 443 yards with 9 TDs, 301 passing yards with 4 touchdowns and NO interceptions. On defense the 5-8, 145 pound senior has 26 tackles, 2 interceptions and a blocked field goal.

….Coming up next in Friday Night Lights Heroes-Part 2…...The Ord stars, Adams Central’s new running sensation and much more.