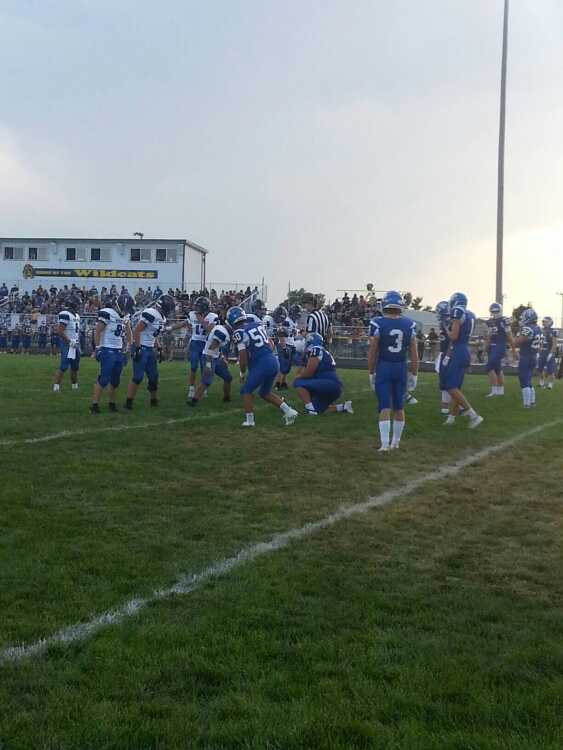 It simply does not take Pierce head football coach Mark Brahmer and his gold medal staff long to figure things out.

What makes it even more eye-opening is the fact Pierce returned only 2 starters on offense and 3 on the defensive side from their 12-1 C-1 state runner up team from a year ago.

But that’s the way things work up there in Mark Brahmer’s world of Bluejay football. They get 65 or so young men out for football and in that mix are star players, just waiting in the wings for their turn to make the next Pierce team a great one.

It took only 4 plays and a short 43 yard field for St. Paul to hit the board following a 3 and out for Pierce to open the contest. All-State running back Eli Larsen, the state’s leading returning rusher (2,050 yards) carried 3 of the 4 plays, zipping for a 26 yard touchdown on his 3rd carry of 2020.

Sam Kramer boot the PAT and the Wildcats had themselves and early 7-0 advantage.

Pierce threatened to score on their next possession, thanks to a sensational one-handed catch by junior TE Ben Brahmer. The play, which stretched 28 yards, almost looked routine for the coaches son as he floated through the St. Paul night air, catching the ball firmly with one hand before hitting the deep turf.

The Wildcat defense stiffened though, killing the Pierce drive at the ‘Cat 11 yard line.

In the blink of a Rusty Fuller eye, the Wildcats had jumped on Class C-1’s fourth rated football team by a 13-0 count.

It didn’t stay that way very long, in a game filled with big plays. Really big plays….by both teams

When you talk about figuring things out, that’s exactly what Mark Brahmer and his top notch staff of Tyler Legate, Kyle Simmons, Grant Doerr, Les Painter and Carl Scholting did in quarter number two.

It appeared St. Paul might stop Pierce for the 3rd straight possession when the Bluejays Ben Brahmer were forced to punt from his own 26 yard line. To make things more interesting, the punt sailed only 12 yards to the Pierce 38, but the ball bounded off a St. Paul player’s shoulder pad on the attempted return, and the Bluejays pounced on the loose football, gaining another offensive possession at their own 48.

The second quarter floodgates then opened up for Pierce….or St. Paul, depending on how you look at the situation.

The Bluejays drove straight down the field with 165 pound senior Tyler Race finishing things off with a 3 yard TD run.

Four minutes and 8 ticks late, junior speedster Michael Kruntorad took a Abram Scholting pitch and raced 83 yards down the Wildcat side for his first of two consecutive long scoring dashes. Big 205 pound senior Cruz Gleason booted the PAT and Pierce had their first lead of the contest at 14-13 with 7:11 left in the second quarter.

Eli Larsen gave the lead back to St. Paul on the ensuing kickoff when the senior speed demon sprinted 96 yards down the home sidelines for a sensational Kick Return score.

Hold on though. Fifty one seconds later, facing a 3rd and 20 from the midfield stripe, 160 pound junior WR Ritter Oestreich slipped by the St. Paul defense and caught a 50 yard touchdown pass from sophomore quarterback Abram Scholting, who played like a wizard on both sides of the ball in his first big varsity test.

“star players, just waiting in the wings for their turn to make the next Pierce team a great one”

The real shock to St. Paul came with just 31 seconds remaining before halftime. It appeared that the Wildcat defense may not have been lined up correctly, because Pierce running back Michael Kruntorad made it look real easy when he blasted through a gaping hole at the line of scrimmage, then proceeded to waltz untouched for a 50 yard TD gallop. And a swift one at that.

The leisurely Kruntorad sprint to the goal line put Pierce up by a 28-19 count at halftime.

Most of the 3rd quarter was owned by the defenses, but Pierce finally capitalized after when linebacker Michael Kruntorad picked off a Brenden Knapp pass, returning it to the Wildcat 25.

The St. Paul defense though, had Pierce stopped on the drive until a roughing the passer was called on a 3rd and 9 at the ‘Cat 24.

The major infraction moved the ball to the St. Paul 9 yard line and three plays later, Tyler Race scored from 3 yards out, giving the visiting Bluejays a 34-19 lead with 1:56 left in the 3rd.

The touchdown must have ignited the St. Paul offense, especially Eli Larsen, who ran like a madman on the following possession.

After ripping off a 13 yard gain on first down, the fuming St. Paul All-State product broke loose for a 48 yard touchdown run, bowling over Pierce defenders all the way. But a block in the back brought the play back to the Pierce 24 and Larsen appeared even more determined to score after that.

Following a 2 yard gain by fullback Trevor Dugan, Larsen rambled 16 yards to the Pierce 6, then closed out the drive with a six yard power dash score.

The Larsen touchdown cut the Pierce lead to 35-25 after three quarters, but we weren’t anywhere near finished here sports fans.

Pierce started the 4th quarter scoring when they capitalized on a pass interference call at the Wildcat 30. The penalty moved the ball to 15. A trio of plays later, 190 pound senior David Dale powered his way in for a 4 yard score giving Pierce a 41-25 lead.

Fifty eight seconds later, St. Paul QB Brenden Knapp and Tommy Wroblewski hooked up again, this time for a 70 yard touchdown. The Pierce lead was then back down to ten at 41-31.

St. Paul still had 7:50 seconds left in the wild contest to make things happen. In fact, the Wildcats had a golden opportunity to cut the lead to single digits after Eli Larsen stripped the ball out of a Pierce ball carrier’s hands, setting up a very short field for the ‘Cats at the Bluejay 20.

But the Pierce “D” stiffened, forcing St. Paul to attempt a 25 yard field goal, which was booted just wide by sophomore Sam Kramer.

Now it was the Pierce offense’s turn and Mark Brahmer had other ideas on how to move the football and those thoughts were centered on the aerial game, a thing last year’s Pierce team rarely fell back on a year ago.. And why would you with the The Three Horsemen in the backfield.

Not tonight though. Sophomore QB Abram Scholting went to work. “star players, just waiting in the wings for their turn to make the next Pierce team a great one”.

Scholting, a 170 pound sophomore, drove his team 80 yards for the backbreaking touchdown, hitting sensational Ben Brahmer with another routine one-handed 33 yard pass completion. That was followed by a 30 yard strike to All-State TE candidate Garrett Meier.

Tyler Race then “raced” 13 yards for the damaging score with just 2:34 left in the contest. Cruz Gleason again booted the PAT, extending his Pierce team’s lead to 48-31.

St. Paul was not finished though. The ‘Cats moved from their own 32 to the Pierce 5 yard line, aided by back-to-back pass interference calls on the Bluejays.

But Brenden Knapp went to the well one too many times, throwing what appeared to be a nice pass to his right. But Abram Scholting (yes, the QB) picked off the Knapp pass and returned it 96 yards for a Pierce Pick 6 touchdown.

“star players, just waiting in the wings for their turn to make the next Pierce team a great one”.

Just twenty six seconds appeared on the clock and game over, right?

Junior WR Rylan Birkby just had to add his name to the scorebook by returning the ensuing kickoff 76 yards for a score against the Pierce kickoff unit.

Pierce sophomore Abram Scholting made a nice pasing debut by connecting on 6 of 13 throws for 154 yards and that 50 yard TD toss to Ritter Oestreich.

The Pierce receiving game was paced by Ben Brahmer, who caught 3 aerials for 64 yards. Garret Meier added two catches for 40 yards and Ritter Oestreich had the one TD grab covering 50 big ones.

St. Paul’s receiving corps was paced by All-Stater Tommy Wroblewski, who caught 3 for a monster 173 yards and two scores.