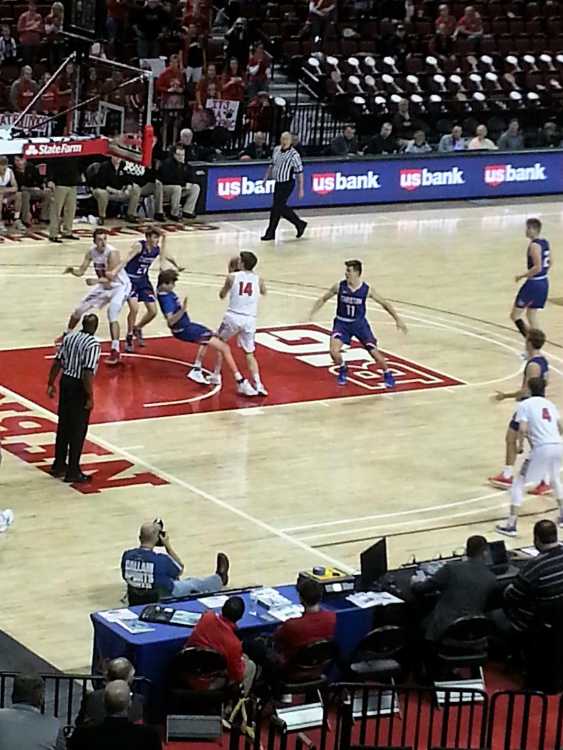 My All-State Basketball Teams came out Friday. There were some players not making my teams that richly deserve some publicity. Some will appear on other All-State lists, maybe even be First Team selections.

There will always be disappointments and sadness when making All-State selections, but it comes with the territory. I have a unique system of choosing All-State talent and it does not include ballots from coaches, which is probably the correct manner in which to do this thing.

But, I have access to basketball game film, just like football. There is a sincere attempt to make the correct and proper choices. There are sleepless nights trying to fit the puzzle pieces in place, but I learned a long time ago, you can never please them all.

There are still players I wish to spotlight that did not appear on my All-State teams, and they are top notch talents in a state that is beginning to produce more Division One talent than ever before it seems.

So here they are, some of the true heroes of Nebraska prep basketball, who deserve some serious kudos.

*Max Murrell-Millard North - 6-9 Stanford recruit was 4th man on the totem pole as far as scoring goes on an incredibly talent laden Millard North squad. Son of former Nebraska high jump record holder, Chad Murrell (Grand Island), Max is another one of those bigs who could drain the trey at critical times.

Murrell also swatted away 110 shots during this season for the Mustangs and was a standout in Millard North’s 74-69 loss to IMG Academy at the Heartland Hoops Classic in Grand Island. In that game, Max scored 12 points, which included a pair of threes, pulled down two rebounds, had a steal and blocked two shots.

*Frankie Fidler-Bellevue West - 6-6 junior had a monster State Tournament a week ago, being named to the overall All-Tournament team in both the Omaha World-Herald and Lincoln Journal-Star, along with teammate Chucky Hepburn.

Overshadowed in the scoring department during the regular season by older bro Louis Fidler, the hard battling junior was always near the basket when it came time to fight for either the offensive or defensive rebound.

After averaging 11.5 ppg and 6 rpg during the regular season, Frankie averaged 18.7 ppg and 11.7 rpg during this year’s State Tournament.

Frankie posted games of 17 pts. vs. Elkhorn in the 1st Round, 23 against Westside in the semis, and 16 points in the Title game win over Millard North. In the first two games alone, the younger Fidler scorched the nets with 13 of 18 shooting from the field.

*Jasen Green-Millard North - 6-7 sophomore small forward has already been offered by Fred Hoiberg and Nebraska. Aggressive competitor averaged 11 ppg and nearly 5 rebounds an outing and was always be involved in the play on both sides of the ball.

Jasen Green had a 9 game stretch from January 3rd to February 1st, when he averaged 15.2 points an outing, including games of 18 and 16 against Creighton Prep and another 18 point output versus tough Omaha Westside.

Jasen also had a night to remember against national powerhouse IMG Academy in the Heartland Hoops Classic, netting sixteen points and snaring nine rebounds against some of the best talent in the nation.

Jasen Green is a name we will be hearing over and over before the lad completes his career at Millard North.

*Joey Skoff-Bellevue East - Slender 6-2 senior sharpshooter was just 27 points short of scoring 600 points this season. Shot an incredible 59% from the field against some of the toughest competition in Class A.

Eclipsed the 30 point mark half a dozen times, including a 42 point explosion in a 74-59 win over Omaha Northwest in the Metro Conference Tournament two days after Christmas. Was never held under 13 points in a single game this season.

Pure shooter who toiled for a 9-14 team, but held up his end of the bargain every single game. The Chieftains may have struggled to win a game without Joey Skoff’s presence.

In 22 games played this season, Barber was held under 20 points just four times while surpassing the 30 point mark eight times, including a season best 41 big ones in a 62-59 win over Bellevue East. That very evening, Jaxson and Joey Skoff combined for 71 points out of the 121 scored in what had to be the most wicked shooting exhibition in the state this season.

I could not find any game by game stats this season for Hilgendorf, but can guarantee the young man can play a number of positions on the court, and a sweet three point shot coming from a 6-9 dude is not an everyday sight in Nebraska high school basketball.

Terrific talent who did a variety of things for the state tournament qualifying the Hastings Tigers, who featured one of Class B’s finest players in Connor Creech and an outstanding rough and tough, blue collar, scoring/rebounding machine in rugged Jake Schroeder.

*Isaac Traudt-Grand Island - 6-8 sophomore made a huge splash from Day One for the Islanders. It took only 8 quarters for Traudt to surpass his freshman season total of 33 points. The GI talent, who has terrific bloodlines, scored 417 points for the 17-8 Islanders, who were a mere three points away from making a trip to the state tournament this season.

Isaac Traudt ended the 2019/2020 season averaging 16.7 ppg and 6.2 rpg, and was held under double figure scoring only 4 times all year. His high game of the season was a 33 point outburst at Creighton Prep in a game that saw the sophomore nail a game winning, 35 foot buzzer beating shot in Grand Island’s 57-54 victory.

In case your math is a bit slow today, Traudt scored 58% of GI’s points that Saturday afternoon at the Bird Cage.

Traudt also shot a respectable 36% form beyond the arc this season and will only get better the next two seasons.

*Dei Jengmer-GICC - The 6-9 junior, who basically has one year of real basketball experience, improved steadily as the year progressed. Jengmer cut his teeth against top notch competition during the Crusaders 25-4 season, culminating with an outstanding C-2 state tournament performance.

Dei, who has sparred on the practice hardwoods for a number of years with Grand Island Senior High All-State buddy Them Koang, averaged 10 ppg and 6.4 rpg during the season, and scored 17 points, pulled down 8 boards and rejected a pair of shots in GICC’s terrific 3 overtime victory over Yutan in the Class C-2 semifinals.

Jengmer, who committed only 54 fouls all season while defending well, should be a force next season for the Crusaders, who return their entire starting lineup after finishing runner up in a rugged Class C-2 this season.

*Jace Liebhart-Anselmo-Merna - Rangy, 6-5, 180 pound senior SF/PF scored 1,318 points in his 88 game career as a 4 year starter for the Coyotes. Teammate Seth Miller was a two-time All-State selection and scored less points (1,218), but averaged double figure rebounds despite being 3 inches shorter.