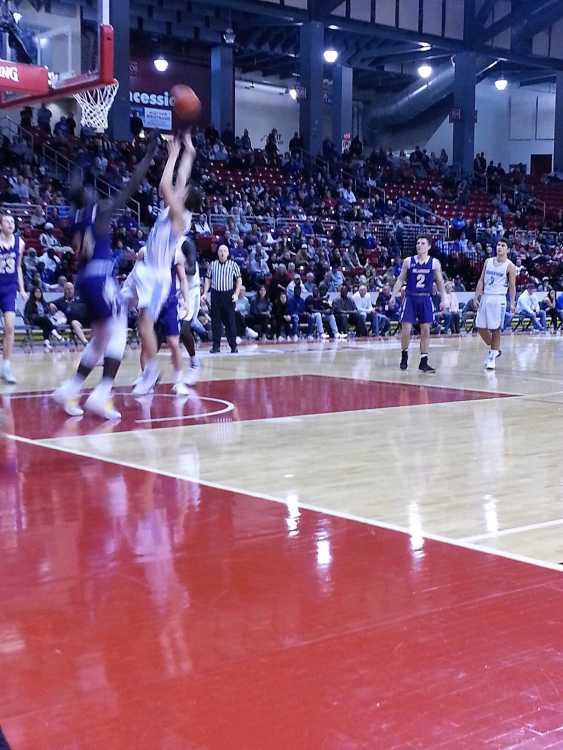 It doesn’t get much better than the 13th annual Heartland Hoops Classic, which was staged Saturday by basketball coach/entrepreneur Tino Martinez at the Heartland Events Center in Grand Island.

The masses of hoops aficionados swarmed in from all directions of the state to witness an eight game slate that included three national powers, two of which collided head on.

The Events Center began to fill up even as I was calling Game 2 of day as Yutan flexed its Class C-2 muscles against a Fort Kearny conference black and blued Elm Creek squad.

By the time defending national champion IMG Academy took the floor against Millard North, the place had swelled to near capacity, as over 6,100 looked on to witness the power of Nebraska prep basketball power holding its own with an elite, nationally ranked program.

Not the first time that’s happened in the 13 year history of the Hoops Classic either.

Here are the scores of all eight games and a group of the Nebraska high school players that really impressed me last Saturday.

Sallis hit 9 of his 18 shots from the field, enroute to his game high 23 points. The talented shooting guard backed down to nobody on IMG’s defense, challenging each and every defender who guarded him.

IMG coach Sean McAloon not only thought Sallis was one of the better players in the country, but stated that Millard North was better than most of the ranked teams the Ascenders have played this season.

Makes you wonder how good Hunter Sallis might become once he hits the big time D1 wars. The dude is a baller

*(After witnessing all the IMG Academy dunks Saturday evening, I was curious what it might cost to attend that institution for a year (grades 9-12). IMG’s website states it will cost you $83,300/year for room and board to play basketball.

And now you know. Better start saving that pocket change)*

*Jasen Green-Millard North (#35) - The 6-7 sophomore, who has already been offered by Nebraska, put on a dazzling display for Husker coach Fred Hoiberg, who was seated front row courtside for the IMG Academy matchup.

Green poured in 16 points and battled inside fearlessly for 10 rebounds against the defending national champion Ascenders. As fabulous as Hunter Sallis looked, Jasen also proved he has a bright future ahead of him at the Division One basketball level.

Max Murrell, son of former Grand Island Senior High standout Chris Murrell, and the lone senior on the squad, dropped in 12 points and drew defensive attention from IMG as an outside shooting threat despite standing 6 feet, nine inches tall..

Saint Thomas, who scored 12 points as well, appeared to be comfortable playing against elite competition, while Jadin Johnson stood out on the defensive side of things, constantly providing pressure on IMG’s elite shooters.

*Colin Murray-Kearney (#30) - “Colin Murray for Threeee”. The phrase was a frequent occurrence from yours truly during the Bearcats 73-50 pounding of Elkhorn Mt. Michael…..eight times to be exact. The 6-1 senior’s eight three pointers set both a Kearney high single game record and a Heartland Hoops Classic record as well.

Drake Beranek’s troops sprinted out to a 27-4 lead, never looking in the rear view, and that comes exactly one week after Mt Michael Benedictine rolled into Hastings and beat the Tigers in double overtime. The Mount Mike win also snaps a 4 game losing streak for the Cats, who dropped games to Class A biggies Creighton Prep (59-57), Grand Island (73-64), Omaha Westside (71-59) and Lincoln North Star (72-67 in OT).

If Kearney is victorious against a pair of 10-10 teams (Omaha Burke and Gretna) this final week of the regular season, the Bearcats will really be a bad draw for anyone in entering Class A district play.

You think Connor Beranek hasn’t been a huge shot in the arm to this Kearney High basketball team this season? Oh yeah. One Coach Beranek is tough enough, but when two line up against your program, look out.

*Brady Timm (#3), Trey Knudsen (#0), Will Hayes (#1)-Yutan - Timm put on a dazzling display in the Elm Creek win with his “now you see me, now you don’t” Houdini-like moves which led to 17 points, 11 boards and 8 assists. The kid is unbelievable and the Real Deal, but we knew that coming in, didn’t we?

“Trey Knudsen for Threeeee!” Four times I counted myself belting that one out and it led to a game high 20 point output for the 6-2 senior. Meanwhile, 5-9 senior Will Hayes was sneaking around, benefitting from Brady Timm assists and matching Knudsen’s total for shots beyond the arc, with a quartet of treys himself.

*Tyler Witt, Jack Fiegener-Falls City Sacred Heart - Trigger man Tyler Witt was a perfect 5 for 5 from the field and 4 of 6 from the charity stripe in Sacred Heart’s 47-38 victory over a good Fullerton team. With Witt handling the outside, it was 6-2 junior Jack Fiegener doing the damage on the inside.

Witt’s 14 and Fiegener’s 13 paced the Irish but more importantly, the two were instrumental on the defensive side, slowing down the Fullerton offense after the Warriors exploded for a 14-0 run to close out the first quarter. So efficient was Witt’s defensive play that his guarding assignment, Fullerton’s fine Cole Horacek never hit the board during the entire contest.

*Lucas Vogt (#15), Darwin Snyder (#20), Dylan Buetler (#12), Will Gatzemeyer (#11)-BRLD - Can any basketball team in the state below Class A stop guards Lucas Vogt and Will Gatzemeyer playing straight up man to man defense? This guy says no, but you can bet there are Coaches like GICC mentor Tino Martinez who may be spending some late nights trying to figure that out down the road.

Good lord Vogt and Gatzemeyer are lethal, but it was the senior, Darwin Snyder who came through with his 24 big time points when the Wolverines Gatzemeyer saw limited playing time due to an ankle injury, and Lucas Vogt was hitting only 3 of 10 from the field. But ironically it was Vogt’s 6 for 6 from from the free throw line that hurt Hastings bad in the late stages of the game.

Vogt still scored 12 points and the Renaissance Man, Dylan Buetler was everywhere on the brand, spanking new Heartland Events Center floor, adding his 11 points to the cause.

*Connor Creech-Hastings (#11) - Took game honors with his sparking 23 point effort in the 61-57 loss to BRLD. Connor is literally unstoppable with his uncanny ability to drive to the hoop and either score or draw the foul. The young man with the million dollar personality was born to play the game, waiting for (Dad) Lance Creech to pick him up from grade school so he could accompany his Pop to Hastings College road games.

It would be a shame for the Tigers not to make it to Lincoln this March so the masses could witness the superior play of Connor Creech.

*Jayden Byabato (#11), Them Koang (#24)-Grand Island Senior High - Not many people score with one of GICC’s best players defending them, but the 6-2 Byabato charged off the bench to do just that, scoring a game high 22 points to lead the proud Islander program to their historical 62-56 win over GICC.

Not all of Byabato’s points came at the expense of one defender for sure, but credit the Islander Master of Trickery, as he slipped, slithered and drove his way to the bucket, especially late in the going.

It was also the inside play of Islander “Big” Them Koang on both sides of the ball that hurt the Crusaders throughout, especially on the boards. Koang appears to have won the inside BIGS battle between he and close friend Dei Jengmer of GICC.

Koang forced his inside presence on the younger Dei Jengmer, who was whistled for two early fouls which ended up severely hampering the young Crusader post player, who rarely fouls anyone.

Koang ended the night with15 points and a boatload of rebounds, displaying his superior strength, which is the result of extremely hard work coming into, and continuing throughout this current basketball campaign.

*Koby Bales (#11), Marcus Lowery (#33)-Grand Island Central Catholic - It was the incredible play of Crusader 6-2 junior Koby Bales that kept GICC in the lead for three quarters. Bales, who would rival anyone in the state with his inside, no-travel moves to the basket, was a shining star with his 7 of 13 shooting from the field and 8 of 11 efficiency from the charity strip shooting accuracy.

Koby Bales is a sure-fire All-State player, despite performing on a basketball team with sensational, unselfish balance.

And sophomore Marcus Lowery? Plain and simple. The dude held fellow sophomore Isaac Traudt, an absolute, sure-fire Division One prospect, to 8 total points on 4 of 14 shooting from the field. The next time you watch a GICC game and wonder why Marcus Lowrey isn’t lighting up the boards with his scoring, check out his play on the defensive side of the ball.

Also remember, it was Isaac Traudt that drained the long distance buzzer beater winner against mighty Creighton Prep at their house in Omaha nine days ago.

*Josh Lambert (#50), CJ Hughes (#3), Cam Binder (#2), Ryan Binder (#4)-Auburn - The 6-8 Josh Lambert’s versatility was solidly on display during the Bulldogs 73-68 win over hard-charging Ogallala. The Auburn post man has really sharpened his game from a year ago and he wasn’t exactly a slouch in 2019, as the Bulldogs won a Class C-1 championship.

Lambert led the Auburn scoring with his 21 points and also played very well on the defensive side of the ball..

CJ Hughes, another one of Jimmy Weeks aces, was not far off Lambert’s pace, scoring 19 points while All-Stater Cam Binder and Ryan Binder each chipped in 12 points.

If you are entertaining thoughts about forcing Cam Binder to turn the ball over in the backcourt, forget it. The solidly built, junior ball handling wizard is next to impossible to guard anywhere on the court, especially the backcourt. Ogallala gave it a shot with about different player combination they had, only to come up empty. And we haven’t even mentioned Cam Binder’s ability to light it up from the outside.

Then there is 5-11 sophomore Ryan Binder, who looks all of 12 years old and appears to weigh about a hundred pounds. Oh, but do not dare to take this baby faced lad lightly or the dude will burn you big time even though he is impossible to miss with his bright red, high top shoes.

Left alone, Ryan Binder will either light you up with a long distance three, or jet past your defense for an easy layup.

I haven’t talked to my daughter Erin (Tino’s wife) about Saturday’s crowd numbers, but I might be safe to say it was a record setting day for attendance.

Hats off to Tino Martinez for doing such an excellent job of scouting the Nebraska prep basketball scene a year in advance to set the Hoops Classic field. And, the word about this Classic is circulating nationally from teams who have played in Grand Island during the past 13 years.

Instead of Martinez contacting the elite, nationally ranked powers, some of them are inquiring how they might fly out and do the event. You can thank perennial national power Oak Hill Academy for getting that started.

The 13th Heartland Hoops Classic has been in the books exactly 48 hours and I’m wondering if Nebraska prep basketball fans aren’t already wondering what the 14th version of this great event will have in store for us.