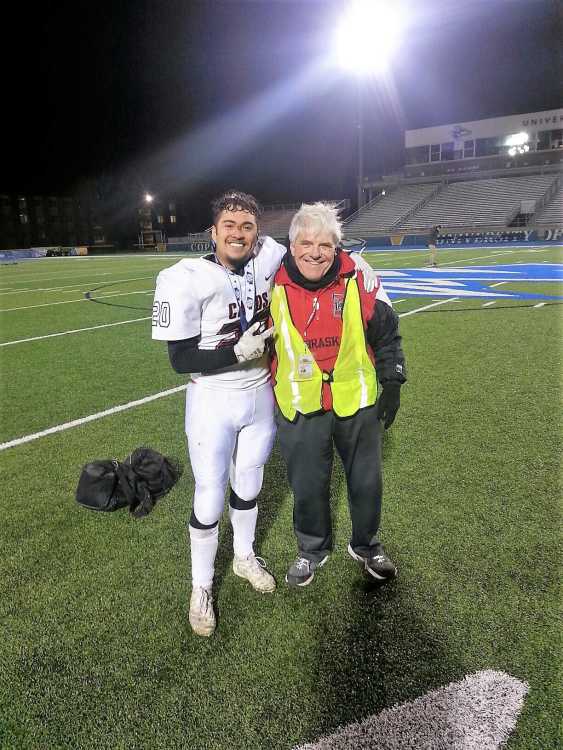 The veteran senior, along with classmate Noah Okraska, played on this same football field for the Six-Man title two years ago, but came up just short (46-38) of defeating the mighty Riverside Chargers, whom everyone thought was invincible.

To come so close to knocking off the “New England Patriots” of 6-Man football in that 2017 title game, then falling just short, left bitter memories in the young minds of both Reazola and Noah Okraska

A year later, Harvard was close to gaining repeat trip to the Six-Man title game, only to let one get away from them in a 63-50 loss to eventual State Champion, Wilcox-Hildreth.

But on this chilly November evening at Cope Stadium in Kearney, Harvard head coach and Six-Man Mastermind Scott Trimble, David Reazola, Noah Okraska, younger bro Ben Okraska and the rest of the Cardinals were not about to let this one get away.

As is often times the case when two 6-Man powerhouses are matched up, they trade touchdown punches back and forth until one of them either creates the break they were waiting for, or simply beats down the other and seizes the victory.

Tonight’s game followed the touchdown trading script in the first half, with Harvard gaining a 22-19 lead. The only difference at that point came off the foot of Harvard place kicker Rodrigo Ganzalez-Fernandez, who booted a pair of two point PATs.

Cardinals quarterback Noah Okraska, who had completed 68% of his 89 passes for 1,350 yards and 28 TDS coming in the game, fired a pair of scoring strikes in that opening half. One came on a 6 yard connection with All-Stater David Reazola, the other on a sparkling 41 yard TD strike to junior Ethan Piper, just one play after a McCool Junction score pulled the Mustangs to within 14-12.

It was simple thing of beauty. David Reazola took the snap, pitched it back to the elder Okraska, who then lofted a perfectly thrown bomb to a streaking Piper, who was all by his lonesome.

On McCool’s side, it was Hobbs that was hurting Harvard, running for 101 yards on just 10 carries and two touchdowns (11, 3 yards) in that first half. A Chase Wilkinson 1 yard scoring with just 47 seconds left before halftime pulled McCool Junction to within 22-19 at the break.

The two powerhouse Six-Man juggernauts traded touchdowns in the third quarter. Noah Okraska’s 27 yard scoring toss to brother Ben stretched the Cardinals lead to 38-27 at the end of three stanzas.

As many of you know, the Okraska boys are the sons of Harvard head coach Scott Trimble.

The 4th and money quarter was one that McCool Junction had to come out fighting and answer the last Harvard score.

Instead, the Mustangs gave up an interception to Harvard when Ryan Harms picked off a Dana Hobbs aerial at the Cardinals 13, returning it to the 24 yard line.

Harvard capitalized on the turnover, taking the ball 56 yards downfield to tack on the first back-to-back scores by either team in the tight contest.

The big plays on the crucial drive came off a pair of pass/catch connections between Noah Okraska and Ethan Piper. Okraska first hit Piper for a nifty 19 yard strike, then came right back with a 17 yard completion that went for a touchdown.

The point after kick attempt by Gonzalez-Fernandez sailed wide, but the damage was done and Harvard had themselves a 44-27 lead and Big Mo on their side.

The Cardinals defense kept Mustang quarterback Dana Hobbs on the run the remainder of the fourth quarter, denying any serious scoring threats until the very end with the game out of reach..

Harvard put the game away with 1:36 left in the final stanza when the magical Reazola took the pitch from Noah Okraska, drifted to his left, then suddenly stopped dead in his tracks to fire a 24 yard touchdown pass to a wide open Ben Okraska.

McCool Junction would not concede though, marching down the field with the ensuing kickoff to put a final score on the board when Owen McDonald found Dana Hobbs for a six yard TD strike. Just 19 seconds remained on the clock when Hobbs gathered in the TD reception.

Despite the loss, this McCool Junction squad is one mighty fine football team who loses only two seniors to graduation this year.

It was a stellar night for Cardinals quarterback Noah Okraska, who completed 10 of 18 passses for 211 yards and Five Touchdowns. David Reazola also got in on the aerial fun, completing a pair of throws for 31 yards and that 24 yard TD to Ben Okraska.

David Reazola also rushed for 101 yards on 20 totes and a score, in addition to his six yard receiving touchdown. Hey, rush for a TD, throw for a TD and catch a touchdown pass. Not a bad nights work for the All-State senior sensation.

Dan Hobbs had an outstanding night for McCool Junction, rushing for 151 yards on 16 carries and a pair of scores. He also completed 13 of 25 passes for 125 yards and a touchdown for the Mustangs, who close the 2019 season with an 11-1 record.

On a personal note, I have to give high praise to Harvard seniors David Razola and Noah Okraska. The two had their eye on this prize for the past two seasons and would not give up until the pair, heisted high in the air on the shoulders of teammates, held the State Championship trophy high into the frigid skies for all the Harvard faithful to see.

It is David Reazola I will never forget. Beads of perspiration running down his face, dried blood extending from the bridge of his nose all the way to his jaw, the personable, well-spoken senior wowed reporters with a post game interview that sounded well beyond his years.

The young man, who has lifetime success written all over his body, spoke with humility and pride, always crediting his teammates and coaches for the successes this Harvard team enjoyed this year.

I marvelled at young Reazola’s wisdom and gametime determination to make right a heartbreak that stretched back two years in time. This lad is a true gem, one of a rare breed that only comes along once in a blue moon.

And so ends the 24 month journey for Reazola, the Okraskas, Scott Trimble and staff, and this Harvard football team.

“Great moments are born from Great opportunities” and tonight the Harvard Cardinals seized that opportunity, turned it into a great moment, and won themselves a Nebraska State Six-Man Football Championship.