Osceola/High Plains tops Cross County in a Clarks Classic for the Ages. 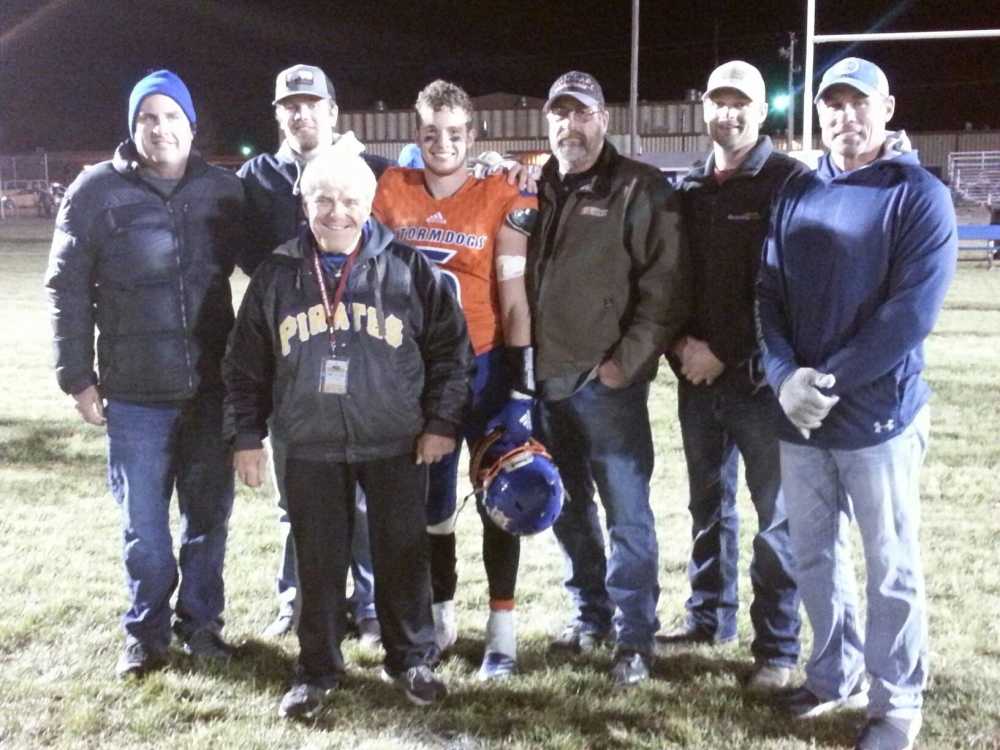 The masses from Polk County and far beyond converged on the town of Clarks, transforming the normally quiet Central Nebraska village into a spectacular gridiron spectacle not witnessed since the glory days of the mighty Blue Bombers of Clarks high school.

If you closed your eyes for just an instant, you could almost see Polk-Hordville’s Paul Van Housen and Clarks rugged Brian Pollard ripping up the turf at Ed Booth Field, as it is known these days.

But on this November 2019 night, there were no Ken Reikens, or Jerry Sundbergs, or Craig Van Housens, nor were there any Greg Doses, or Brian Doses, or Brent Ksiazeks or Terry Benders on the field, or the legendary Norm Manstedt up in the crows nest doing the public address honors.

This was 2019 and a battle royale between a pair of friendly neighbors fighting for the right to play at Memorial Stadium in Lincoln next Monday for the Class D-1, Eight Man Football Championship.

It was a matchup of an 8-3 revamped Osceola/High Plains team and a 7-4 Cross County squad, who turned into one of D-1’s strongest contingents following a 52-18 loss to this same StormDog team back on September 27th.

The facilities looked great, with several sets of large bleachers being shipped in to accommodate the massive crowd. The bleachers were jammed, yet fans still surrounded the field of battle, keeping the long standing Nebraska high school tradition alive of two to three fans circling the field, battling for the perfect view.

Not one living soul amongst the masses believed this baby was going to be a 52-18 repeat of September 27th of this year. Osceola/High Plains coach Greg Wood and legendary coaching assistant, Bob Fuller knew better. And you can bet the farm Cross County head man Hayden DeLano left that 52-18 score on the field 30 minutes after the gems ended.

After both teams forced opening possession punts, Osceola/High Plains gained great field position on their own 34 yard line and wasted no time feeding the ball to Keaton Van Housen, who had 1,964 rushing yards entering the game.

The All-State candidate chewed up 34 of the next 46 yards, finally yielding the ball to backfield buddy Dylan Soule, who then punched it in from the one for a StormDog score. (Keaton Van Housen’s 10 yard scamper on his 4th carry of the drive, pushed the fabulous senior runner over the 2,000 yard rushing mark for the season.)

Promising freshman Isaiah Zelansey added the double PAT run and StormDogs had an 8-0 lead, but Cross County would answer back with just :17.8 left in the opening stanza on a drive that took only 4 plays.

Carter Seim, the sophomore sensation who has played a big part in the resurgence of this Cougar football team, squirted through the Stormdog defense for an 18 yard touchdown with under 20 seconds left in that 1st quarter.

The fleet-footed Seim was late getting started with this Cross County football squad after suffering a summertime injury. The setback prevented the sophomore speedster from seeing any playing time until Game three of the regular season and he’s hit the gound running and not let up since.

The second quarter belonged to Osceola/High Plains. Well, nearly all of it.

Keaton Van Housen’s 5 yard touchdown with :51.6 left in the second quarter looked like the Stormdogs might take a 21-8 lead into the halftime break. Cross County had other ideas.

The chance for Cross County to answer Soule’s touchdown however, did not look very promising with the ball sitting on the Cougar 23 yard line and the Ed Booth Field scoreboard clock reading, :44.1 left in the 2nd.

You had to think Hayden DeLano would have a pass play up his sleeve for this drive. He did.

The good news; Cross County had gained a first and 10 at the Osceola/High Plains 31 yard line. The bad news; there were only :11.4 ticks left before halftime.

No worries here. Senior quarterback Cael Lundstrom planted his feet, then fired a perfect 30 yard strike to 195 pound sophomore Cory Hollinger. With the ball at the one yard line, the Cougars went into hurry-up mode with Lundstrom pulling off the spike to kill the clock with :0.06 left.

Lance Berck crashed into the end zone on the rugby scrum type play with no time showing, Colton Nuttlemen hit Isaac Noyd for the two point conversion, and the Stormdog lead was cut to 21-14 at the half.

The way quarter number three began, it appeared Osceola/High Plains may be on their way to putting this one away.

After forcing a Cross County punt to begin the 3rd quarter, Keaton Van Housen brought the huge crowd to its feet on the Stormdogs very first play of the 2nd half. The magical senior exploded right through the heart of the Cougar defense for an impressive “Van Housen-like” 55 yard touchdown run to put his team up 27-14 with 8:24 left in the 3rd quarter

Later in the 3rd stanza, Cross County received the break they needed when a Cougar defender stripped the ball out of Dylan Soule’ hands at the Osceola/High Plains 29 yard line and Landon Berck recovered.

Five plays later, Cael Lundstrom squeezed in from the one on another ruby scrum type play and the Cougars were back in it, trailing 27-22 entering the 4th quarter.

But this on this night, with a trip to Lincoln at stake, there was only 5:43 left on the clock when Cross County quarterback Cael Lundstrom uncorked a beautiful 23 yard touchdown pass to junior Christian Rystrom, who made a spectacular leaping touchdown grab.

Cross County had their first lead of the night at 30-27 after Rystrom skirted his left side for the two point conversion and those who watched the Howells-Dodge could just about predict what was about to take place when the Stormdogs took the ball at their own 21 yard line. A heavy dose of Keaton Van Housen.

And a heavy dose it was.

The Osceola/High Plains defense then forced four incomplete Cross County passes, regained possession of the football, and ran out the clock to punch their ticket to meet Burwell for the Eight Man Two title next Monday at Memorial Stadium in Lincoln.

Keaton Van Housen led all rushers with 254 yards on 31 carries and three touchdowns. That raises Van Housen’s 2019 rushing total to an unofficial 2,218 yards, surpassing his Dad, Paul Van Housen’s 1987 total of 2,142 yards. Somehow, I have the feeling Paul is alright with that.

Dylan Soule added 45 yards on 11 carries, while QB Carter Boden ran for 42 yards on 10 totes. The Stormdogs did not throw a pass in the win tonight.

The Cross County ground attack was slowed down to 172 yards on this night by the surging Stromdog defense, which was led by All-State candidate Kyle Sterup (#8), who entered the contest with a team leading 122 tackles.

The Cougars, who also boasted a pair of 1000 yard rushers in Carter Seim and Isaac Noyd, saw the efficient OsceolaHigh Plains defense shut down the pair to a combined total of 133 yards rushing. Seim was the Cross County leading ground gainer with 77 yards on 20 carries and a touchdown.