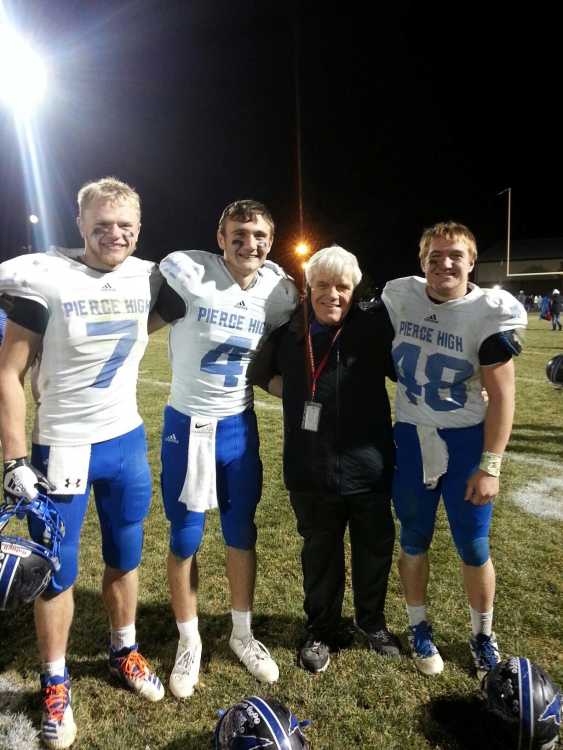 Even the nationally famous CalPreps computer could have even fathomed a state semifinal this lopsided. In fact, the site’s prediction for this one read; Pierce 35-31 Adams Central.

By now the computer has probably short circuited after the final score of this baby was entered; Pierce 54-14 Adams Central.

What a computer doesn’t know is the fact the physical Pierce offense frequently cranks out 500 yards rushing an outing, no matter who the opponent is. That didn’t even change when thousand yard rushing quarterback Dalton Freeman went out with a separated shoulder early in the season.

And the experts say a team the just runs the football will never win a state championship. Too dated, too old fashioned. The only way that type of offense could ever work, would be back in the days of the Four Horsemen of Notre Dame, and that was 97 years ago to be exact.

So tell us modern day football experts, when did football change at the high school level? I thought it was still blocking and tackling and physical football if you wanted to run the table and win a state championship.

On this night, the Pierce Bluejays did nothing different than they’ve done all season. Line up and overpower you at the line of scrimmage on both sides of the football.

And Adams Central unfortunately found that out on a mild, but windy November night when even the undefeated Patriots, with all their genuine star power, could never really get it going against the physical, grind it out, fundamental Pierce football team.

Pierce set the tone on their opening drive of the game. After forcing and 3 and out at the Patriots 27, an 18 yard punt set up a short field for Head Coach Mark Brahmer’s complex, yet simple offense, at the A/C 45 yard line.

Bruising, but swift Pierce fullback Brett Tinker picked up 15 yards on first down to the Patriots 30. Four straight carries by Carson Oestreich netted the Bluejays their first score of the game when the Pierce senior blasted in from three yards out.

By halftime, Oestreich and Tinker added short touchdown runs, Dalton Freeman had attempted his only pass of the game, and Pierce owned a 20-0 lead.

Oesteich was unstoppable in those first two quarters with his 120 yards on 13 carries, many of which featured the senior’s precisely timed sharp cuts and slippery, smoke though a keyhole type moves.

While the deep Bluejay offensive line was flexing their physical, move ‘em back back, muscles, defensive coordinator Tyler Legate’s entire 11 man entourage, from front to back, was making life miserable for record setting quarterback Evan Johnson, one of the best signal callers in all of Nebraska 11-Man football.

So relentless was Legate’s pass rush, Johnson rarely had time to plant his feet to throw the football, and when he thought about it, his receivers were usually covered, especially All-State candidate Leif Spady.

There may have been a reason Spady rarely had a sniff on this night. Legate had a man shadowing the sensational Adams Central receiver……..Carson Oestreich. So effective was Oestreich’s coverage that Spady had just one lonely catch through the first three quarters, and he dearly paid for that after a minimal 3 yard pickup.

It’s not like Evan Johnson’s passes were off the mark either. The lad just doesn’t deliver bad passes, but two passes that were sure touchdowns for Johnson, to Micah Gengenbach and Tyler Slechta, were knocked away in the end zone by Oestreich and Dalton Freeman.

In fact, the sure handed Slechta had the ball in his grasp for an instant before he was separated from the ball by Freeman.

Those foiled touchdown opportunities, unfortunately for Adams Central, were basically set up by timely penalties called on the Pierce defense. In fact, at halftime, the Bluejays had a head scratching 98 yards in penalties accessed against them.

That was 31 yards more than the entire Adams Central offensive output in the opening 24 minutes of play.

Pierce took the 3rd quarter kickoff and promptly marched 80 yards downfield in 7 plays and that included a Brett Tinker fumble that resulted in a no gainer.

Again, it was Carson Oestreich that provided the big gainer in the drive, a sweet 36 yard dancing advance from the Bluejay thirty six yard line all the way to the A/C 23.

Oestreich eventually took it in from the six yard line for his third of five touchdowns on the night, giving the Brachmer’s crew a 26-0 lead.

Adams Central, perhaps feeling the game slipping away, answered the Oestreich score in just 43 seconds when Evan Johnson hit the amazing Gabe Conant with a short flat out pass. The three time Patriot 1000 yard rusher, then weaved his way 62 yards for a touchdown. That cut the Pierce lead to 26-7 following sure-footed Tyler Schlecta’s PAT boot.

A/C needed a stop on the ensuing Pierce possession, and nearly got it with Pierce facing a 4th and one at their own 29.

Brahmer called a timeout, but still sent his offense back out on the field. And just as he had done twice earlier in the game, masterful QB Dalton Freeman pulled the Patriot defense offside with his tricky, staggered, jittery snap count.

Half a dozen plays and 66 yards later, Brett Tinker bashed in from the three for his second score of the night, making it 32-6 Bluejays.

It was on the ensuing Adams Central possession, you could feel the urgency in super coach’s Shawn Mulligan’s play calling. Facing a 4th and 3 at their own 49 yard line, the Patriots went for it and failed to convert.

Pierce took over and immediately lined up in their brutal Maryland I formation with big 220 pound guard Dylan Kuehler lining up at the fullback slot, 185 pound RB Dean Orwig as the middle back and Brett Tinker at the rear back position.

Boom. Tinker for 19 yards. Then it was back to Dalton Freeman under center, skipping 28 yards downfield after two beautifully executed fakes. The ball was then at the Patriot three, Carson Oestreich banged in from there on the next play and it was Pierce 40-7 over a shocked Adams Central football team with 1:24 left in the 3rd quarter.

Carson Oestreich ripped off a 60 yard run on first down at the Bluejay 36, then went the final 4 yards for is 5th score of the night. With no more pressure to convert the two point conversion, kicker Chaden Roth came in and calmly booted the PAT, initiating the running clock with 9:15 remaining in the 4th quarter.

Disaster struck Adams Central on the ensuing possession when the center snap sailed over Evan Johnson’s head at the A/C 14 yard line. The splendid QB attempted to field the snap, but Pierce defensive back Gavin Larson was right there to scoop up the loose football and take it in the end zone from six yards away.

Adams Central, not ready to quit just yet, recovered a fumble on an errant quarterback pitch play from the Pierce reserves. The very next play, Evan Johnson found Leif Spady for a 35 yard touchdown, a fitting way to end the Patriots scoring for the 2019 season, considering all the times the All-State combination hooked up during the season.

The Bluejays ended the game with a massive 507 yards rushing and zero passing yards. In fact, Dalton Freeman attempted only the one pass all evening, that miss coming in the opening quarter.

Carson Oestreich led the Pierce gound onslaught with 230 yards on 19 carries and 5 TDs. Brett Tinker rambled for 151 yards on 24 totes and two scores.

Dalton Freeman gained 52 yards on just five carries and played a stellar game on defense just as did Oestreich and Tinker.

Adams Central QB Evan Johnson completed 10 of 25 passes for 153 yards, two TDs with one interception (by David Dale). Gabe Conant ran for 83 yards on 16 carries to close out his illustrious career at A/C.

Despite the lopsided loss, I still consider Adams Central one of Class C-1’s finest football squads.

Pierce moves on to Memorial Stadium in Lincoln to meet the undefeated Wahoo Warriors for the C-1 Championship. Kickoff is set for 10:15 next Tuesday, November 26th.