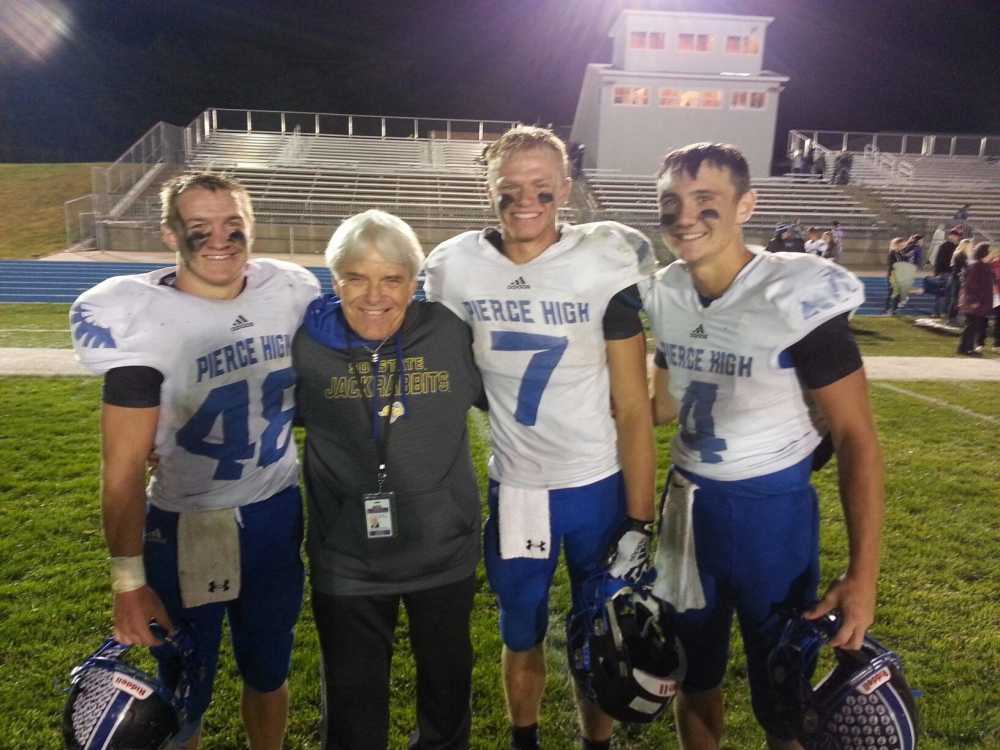 *The Three Horsemen, Bluejay O/D Lines-Pierce - QB Dalton Freeman, HB Carson Oestreich, and FB Brett Tinker are back together and riding high like the Four Horsemen of Notre Dame did back in 1922-24, nearly a century ago.

No, these guys are not Jim Crowley, Elmer Layden, Don Miller or Harry Stuhldreher, nor is their coach Knute Rockne, and they obviously go to Notre Dame, but I thought the name was cool for the Three Horsemen of Millard North back in the day, and now it certainly fits for Pierce. End of history lesson.

Back to modern times here, the Three Horsemen of Pierce all hit the 100+ rushing mark in the Bluejays 49-21 victory over a top notch Ord team. The quarterfinal win by the Bluejays marked the second time Pierce has beaten the Chants in 2019.

Dalton Freeman led the 499 yard rushing onslaught with his 154 yards on 15 carries with touchdown scampers of 9, 38, and 57 yards. Rugged fullback Brett Tinker wasn’t far off with 143 yards on 16 tries, and hard working Carson Oestreich gained 116 yards on 13 totes and ran for touchdowns covering 3, 57 yards in addition to gathering in a 17 yard scoring pass from Freeman.

Tinker has rushed for 1,275 yards through 11 games for Pierce this Fall, with Oestreich right behind at 1,218. Dalton Freeman, who missed 5 games with an injury, is at 511 yards.

And there is a reason for The Three Horsemen’s phenomenal success last season and this year. The incredibly deep, talented offensive line.

The Dream matchup of Pierce and Adams Central takes place just west of Hastings this Friday with the winner punching a ticket to Memorial Stadium for the C-1 Finals.

*Evan Johnson, Gabe Conant, Leif Spady, O/D Lines-Adams Central - The Patriot defense pitched a 17-0 shutout of defending C-1 state champion Aurora in last week’s quarterfinals. You can thank the genius of Adams Central defensive coordinator Josh Lewis for that one. Lewis is simply one of the best in the biz.

The “bend, but don’t break” Patriot defense held the mighty Huskies to just 103 yards of total offense in the win over Aurora, the second triumph of the season over the Huskies for Adams Central.

On offense, Gabe Conant helped keep the Huskie offense off the field with his 152 yards on 30 carries. Record setting quarterback Evan Johnson was a shining star in the quarterfinal victory, completing 9 of 17 passses for 121 yards and a 29 yard TD strike to Leif Spady. The All-State candidate also ran 71 times on 8 carries and a score, which probably had Patriot head coach Shawn Mulligan holding his breath.

Johnson’s nine completions were also distributed among 4 different receivers. Micah Gengenbach grabbed 3 passes for 54 yards, Spady hauled in 2 for 35 yards and a TD, multi-talented Tyler Slechta had 3 receptions for 24 yards and Eli O’Dey nabbed one pass for 8 yards.

Evan Johnson has thrown for 2,192 yards in 11 games this season, good for 21 touchdowns and just 2 INTs. His career stats are just mind-boggling.

Three time thousand yard rusher Gabe Conant is up to 1,688 yards and 27 TDs this season and has run for 4,023 yards with 48 TDs during his 29 game career a a backfield starter for Coach Shawn Mulligan. Gabe has also caught 64 passes for 859 yards (8 TDs) and accumulated 4,902 total yards.

Leading receiver Leif Spady has 48 receptions for 623 yards and 9 scores this season and has accumulated 123 receptions for 1,806 yards and 30 TDs during his 29 game career as a 3 year starter for Adams Central.

*Will Gatzemeyer, Lucas Vogt, Dylan Beutler-BRLD - It took Will Gatzemeyer’s finest effort of the year to lift BRLD to a 60-53 win over North Bend Central in a Class C-2 quarterfinal game. Will “The Thrill” completed 19 of 33 passes for 313 yards and four touchdowns and rushed 33 times 33 times for an additional 229 yards and two more scores in the bizarre heavyweight matchup. He also had 11 tackles on defense.

The game was not decided until Dylan Beutler made a highlight reel, leaping catch of a Gatzemeyer pass, then fell into the end zone with what proved to be the winning touchdown with just 1:51 remaining in the contest.

You couldn’t blame the North Bend defense on the play because the Tigers had a pair of defenders draped all Beutler when the 6-4, 180 pound junior made the remarkable catch.

Gatzemeyer hooked up with the recently returned from injury, Lucas Vogt for a three other touchdowns in the back and forth game. The scoring passes covered 5, 25 and 10 yards.

Vogt, who was playing in just his 5th game of 2019, caught eleven Will Gatzemeyer aerials for 108 yards and those 3 scores. The All-State Basketball star also made six stops on the Wolverine defense and picked off North Bend star QB Austin Endorf in the second quarter returning the interception 65 yards for a Pick 6 with 1:31 left in the quarter.

The Vogt pick six gave BRLD their first lead of the game at 14-12, and even though there were 87 more points scored in the contest, North Bend head coach Ryan Stieren considered it a decisive play that changed the complexion of the game at the time..

After 11 games this season, the fabulous Will Gatzemeyer has completed 58% of his 248 passes for 2,653 yards with 33 touchdowns and just one INT. The senior sensation has also rushed 201 times for 1,654 yards and 18 more TDs. That’s 4,307 yards and 51 touchdowns Mr. Gatzemeyer has been responsible for just this season alone.

The senior has also been a mainstay on defense, making 87 tackles (49 solos), 7 TFL, 8 interceptions and 1 fumble recovery.

Career numbers? You had better be sitting down this;:

Receiving: 8 catches for 134 yards and 1 touchdown

Trailing 21-8 to the Braves at the intermission, Sutton scored on their first four drives of the second half and put up 36 straight unanswered points to earn the 44-28 Class C-2 quarterfinal win.

Junior quarterback Cade Wiseman, son of former Adams Central great Chad Wiseman, toted the ball a grueling 40 times for 288 yards and second half touchdown gallops of 7, 54, and 20 yards. Jackson Perrien, who played quarterback for the Mustangs a year ago, added 130 yards on 19 carries and reached the end zone of runs of 12, 1, and 52 yards.

Wiseman has also passed for 490 yards and 3 TDs, although the Mustangs only throw the football an average of four times a game. Gee, I wonder why?

Can you imagine the rushing yards that will be racked up when Sutton visits BRLD this Friday? The winner goes to Lincoln.

Four different players rushed for touchdowns in the 39 point victory. Senior All-State candidate Ian Lundquist led all rushers with 130 yards on 13 carries and touchdown runs of 26 and 15 yards. Coulter Thiele ran for 113 yards on 8 touches, including an impressive 64 yard scoring sprint down the sidelines.

Jaron Meyer contributed 71 yards on 10 rushes with a 6 yard TD and Caden Nelson had a pair one yard short scoring bursts to go along with his 53 yards on 12 totes.

Now, about that heralded Oakland-Craig Offensive Line. I took a stab at this watching Oakland-Craig game film, so I may be in error but will make corrections when Coach Anderson gets back to me.

These gentlemen have cleared the way for 15 Knights runners to compile 3,656 yards rushing, at 7.6 yards per carry, 59 touchdowns and a per game rushing average of 332 yards.

My question is this? If you are playing Oakland-Craig, who do you key on in that Knights backfield? When Colton Thomsen was healthy it was worse because he might drop back and hit 6-7 Wyatt Seagren with an aerial strike, among several others. Seagren and 10 other Knights receivers have combined for 1,279 yards and 18 TDs in 11 games this season.

On defense, Kitrell made 53 tackles, had three sacks and intercepted one pass that was good for a 50 yard Pick 6 against Fort Calhoun in the season opener.

On defense: 178 tackles, 9 TFL, 3 sacks, 2 interceptions (both Pick 6’s) and a pair of fumble recoveries. Bryce also did the punting for the Bluejays the past three seasons and averaged 35.3 yards per on 24 punts this past year with 6 landing inside the opponent’s 20 yard line.

Ladies and Gentlemen, Bryce Kitrell is a special football player.

*Tommy Stevens-Ord - The Chanticleer RB/LB put together quite a junior season. Ord was eliminated by undefeated Pierce in the quarterfinals last week, but that setback did nothing to diminish the outstanding statistics of Tommy Stevens.

The 5-9, 190 pound Ord standout was a tough, powerful runner, yet deceptively fast in the open field. In that Pierce loss last Friday, Stevens rushed 12 times for 70 yards and scored on a 3 yard run. He also ripped off 48 yard dash in the game and brought back a kickoff 92 yards for a touchdown.

Not many pull that off against Pierce.

Stevens was also a force on the defensive side of the ball, logging 62 tackles. The Ord standout also had an interception and a pair of recovered fumbles this season for the 7-4 Chanticleers.

And the nice thing about Tommy Stevens? He will be back next season for Had Coach Nathan Wells, who does an outstanding job up there in God’s Country.