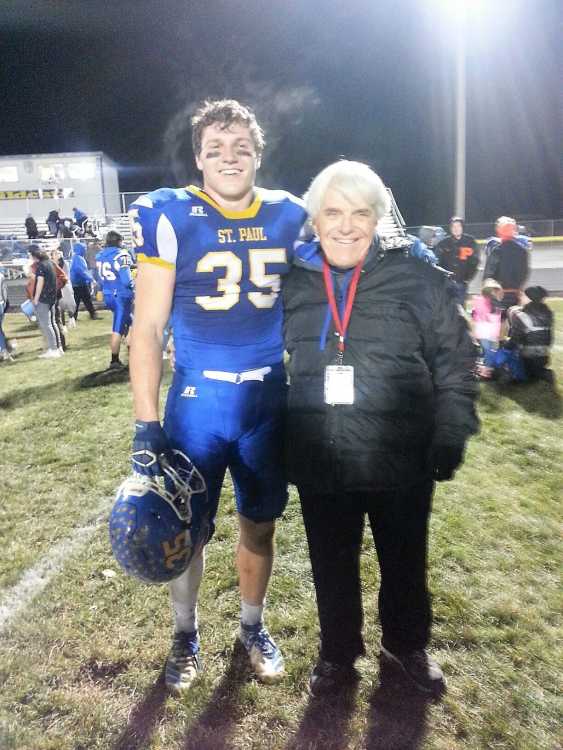 St. Paul running back/linebacker Eli Larson is the one of the best athletes in Class C-2 this season. The junior led his team to a 25-10 win over David City Aquinas in a Friday night Class C-2 quarterfinal game.

Playing traditional power David City Aquinas may have been just what the doctor ordered for a St. Paul football team that has not really been tested this entire season.

The undefeated and #1 rated (C-2) Wildcats held the traditionally vaunted Aquinas rushing attack to 138 yards for the night, 156 total offense, enroute to a 25-10 quarterfinal win over the 8-2 Monarchs.

Two way All-State candidate Eli Larson, who entered the contest as the state’s leading rusher (1,818 yards), powered his way to 166 yards on 21 carries and a touchdown in the key win.

But if you think Eli Larson is the only offensive weapon St. Paul has going, think again. Senior Jackson Seward, a 5-10, 173 pound senior, would be a sure-fire 1000 yard rusher on most other football teams, has 117 less carries than Larson this season, yet still has manage to run for 548 yards and half a dozen touchdowns.

Trevor Dugan, the third man in the ‘Cats wishbone looking backfield, has 314 yards himself. The trio combined for 285 yards on 49 touches and three of the four St. Paul touchdowns tonight, and when they were not racking up the yards offensively, Larson, Seward, and Dugan were causing Aquina major headaches from their linebacker positions on the defensive side.

St. Paul knew they were in for battle on their opening possession of the night. The Wildcats got in their own way on the first play from scrimmage when they were flagged with a holding call at their own 31 yard line.

A first and 20 at the 21 yard line for St. Paul turned into a 4th and 26 at the 15. Punter Logan Vogal skied the boot that finally came down, bounced backwards and ended up the the Wildcat 34.

The powerful Aquinas had a first down at the Wildcat 34, but the St. Paul defense was up to the task though, forcing an Aquinas 35 yard field goal try that came up short. Tragedy averted.

It was now go time for the ‘Cats offense. With the ball on the 20 yard line following the missed field goal, Jackson Seward ripped off a six yard gain to the 26, Eli Larson went for six more, then did what he does best. Break the long run.

Eli bolted off right tackle, headed to the St. Paul sideline, then broke free for a 35 yard gain that carried all the way to the Aquinas 33.

Under normal circumstances, Larson would have probably had himself a 68 yard touchdown run, but Tony Smith’s Aquinas defense just doesn’t allow those type of things, you see.

If you think Eli Larson can fly, check out Tommy Wroblewski’s wheels sometime.

Ron Mimick’s Aquinas would answer right back though, as the Monarchs speedy Kyle Napier nearly took the ensuing kickoff to the house. Napier was finally forced out at the St. Paul 23.

The Wildcat defense stiffened though and Aquinas was forced into another field goal attempt which was converted by junior Brian Cech from 22 yards out.

St. Paul would stretch their lead to 13-3 on the next drive, when hard charging Jackson Seward slipped in for a 10 yard touchdown run, capping the 9 play, 69 yard drive.

The big play on the drive was a 23 yard power dash by…...you guessed it, Eli Larson. Matter of fact, Larson’s big run came on the first play of that drive and carried from the St. Paul 31 to the Aquinas 46.

Aquinas came right out after halftime wanting to answer that Jackson Seward touchdown.

The St. Paul kicker obliged by topping the second half kickoff. The muffed kick squibbed just five yards downfield before the Monarchs pounced on the football at the Wildcat 45.

It appeared that St. Paul might stuff the Aquinas short field field drive when they forced a 4th and one at the ‘Cats 36 yard line, but tough running fullback Zach Pandorf, a 170 pound senior, ripped off a 17 yard gain to get an Aquinas first down at the St. Paul 19.

Monarch sophomore QB Caleb Thege then hit Pandorf with a 12 yard pass completion that carried to the 7 yard line.

Kyle Napier scooted in for the touchdown from there on the following play and St. Paul faced their first real test of 2019 with the scoreboard reading; St. Paul 13 Aquinas 10…..9:49 left 3rd quarter.

The Wildcats would come through with flying colors with an answer to the challenge. Rusty Fuller’s offense put together a picture perfect, sixteen play, 71 yard drive that culminated with Jackson Seward’s second score of the evening, a two yard TD blast.

The drive consumed seven minutes and one second of that 3rd quarter and those types of drives have a way of making it tough for the opponent to answer.

But the St. Paul defense had to make sure this opponent, known for its own time eating drives, did not respond.

The Wildcat “D” was up to the task, holding David City Aquinas scoreless the remainder of the contest.

The Monarchs did put together one nice 4th quarter drive, but the St. Paul defense snuffed it out at the Wildcat 28.

The Wildcats did tack on another touchdown in the middle of the 4th stanza, giving themselves a little more breathing room. Jackson Seward actually scored the final TD of the night from 15 yards away, but the play was negated by personal foul call on the ‘Cats.

No worries. Three plays later Eli Larson bolted in for a touchdown from 4 yards out, his 30th TD of the season, and St.Paul had a 25-10 lead, a score that would hold up for the final count.

St. Paul, who now improves to 11-0, was led by Eli Larson’s 166 yards on 21 carries. Seward added 75 yards rushing and a pair of scores. Cats quarterback Brenden Knapp threw the ball only four times in the game, completing three of those for 60 yards and that 33 yard scoring strike to Wroblewski.

David City Aquinas, who finishes with a fine 8-3 record, was led on the ground by Zach Pandorf’s 42 yards on 12 carries. Caleb Thege, who was stuffed early, finished strong with 40 yards on 10 totes. Kyle Napier followed with 38 yards on 10 touches.

St. Paul now 11-0, moves on to the Class C-2 semifinals to face another unbeaten team, Oakland-Craig who blasted a good Doniphan-Trumbull team 50-16. The game will be a road trip next Friday for the Wildcats.

The winner of that one earns a trip to Memorial Stadium to take on the winner of the Sutton/BRLD contest. Sutton rallied to best Battle Creek 44-28 with a 2nd half comeback and BRLD rallied to beat North Bend in a bizzare, wild 60-53 win.