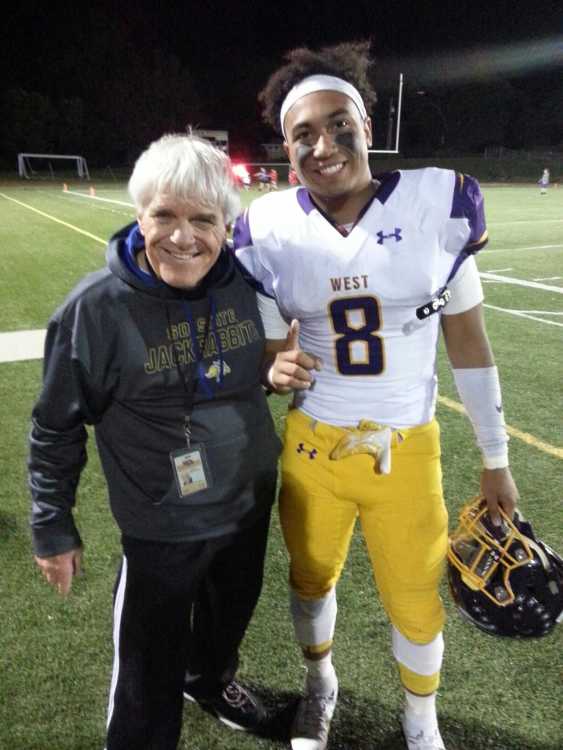 Ducker ran for 235 yards on 22 carries and five touchdowns (3, 6, 20, 8, and 31 yards) which raised his career total touchdowns to 99. We’ll talk about some records Jay is chasing at the end of this tribute.

All-State quarterback candidate Nate Glantz was a deadeye (as usual), completing 22 of 28 passes for 248 yards and a scoring pass of 45 yards to Zavier Betts in the 1st quarter. Zavier’s receiving touchdown did tie the record for the Most Receiving Touchdowns in a Career with his 44th scoring grab.

Betts had six receptions in the win for 85 yards, but the leading receiver in the game was Keagan Johnson, who snared 8 Glantz aerials for 87 big ones.

Jack McDonnell led the defense with 7 tackles (all solos), a sack and an interception. Cruz Jurado added 5 stops (4 solos) and was 6 for 6 on PAT kicks.

Bellevue West advances to the Class A quarterfinals and will have a home game versus Omaha Burke next Friday.

*Carson Oestreich-Pierce - The 185 pound senior flyer erupted for 258 yards on just 13 carries in the Bluejays 55-28 victory over Chase County in th opening round of the Class C-1 playoffs. Oestreich, who averaged 19.9 yards a pop in the game, reached the end zone on runs of 1, 89, an 42 yards.

The 258 yard rushing explosion lifted Carson over the 1000 yard mark for the second consecutive season. Not only was the 258 yard night career high for the hard running Bluejay, but also notched the 14th time Oestreich has gone over the hundred yard rushing mark in a game.

Pierce now advances to the C-1 quarterfinals and will travel to Ord for a rematch with the Chanticleers. Pierce defeated Ord 28-13 back on September 13th in Ord. QB Dalton Freeman went down the 2nd play of that game and missed the next four weeks in that game.

*TJ Urban, Isaiah Harris-Millard South - The Twin Thousand Yard Rushers both had fine nights in the Patriots 42-21 !st Round playoff win over Papillion LaVista South. Harris escaped for 173 yards on 16 carries and a pair of TDs covering 31 and 90 yards.

QB TJ Urban ran 19 times for 118 yards with scoring runs of 1 and 62 yards, which puts him over the 1000 yard rushing mark for the second straight year.

Despite averaging a robust 10.8 yards a tote, Isaiah Harris per carry average actually dropped from 13 yards a pop to 12.8 per carry after this game . I think Coach Andy Means can live with that, don’t you?

Urban also completed 7 of 9 pass attempts for 113 yards which included a 16 TD toss to Spencer Wagner. Also credit Jake Grassaway with a 21 yard Pick Six in the game.

Isaiah Harris is having a special year, there’s no getting around it. How many times have we witnessed the speedy Harris run on through the side of that Millard South offensive line that super linemen Beau Wendt and Kohl Herbohlcheimer occupy, hitting that “A” or “B” gap?

Harris has rushed for 1,611 yards and 23 TDs to date and one reason for that is opposing defenses are concerned about TJ Urban taking off out of that Millard South backfield.

Millard South will entertain Grand Island this Friday in the Class A quarterfinals as part of a Buell Stadium double-header. The Patriots chose the early slot with kickoff slated for 4:00 PM.

Gomes ran the ball 17 times for a 125 yards with TD dashes of 53, 1, and 2 yards He also completed 5 of 9 passe for 155 yards, which included a sweet 44 yard scoring toss to Millard West’s All-State Dalys Beanum. James Conway also scored a TD in the 3rd quarter when he returned an interception 35 yards for a score.

Millard West will host Elkhorn South Friday in the Quarterfinals and will play the 8:00 nightcap at Buell Stadium on the campus of Millard South.

LeClair finished the game with 10 receptions for 135 yards and the 4 scoring tosses. He also ran 13 times for 53 yards and a touchdown in the win.

The Badgers advance to the Class B quarterfinals to face unbeaten and defending Class B king Omaha Skutt Catholic Friday at Skutt. Bennington opened the regular season with a 49-28 loss to the SkyHawks, a game that saw Bohn complete 44 of 66 passes for 407 yards and 4 touchdowns with 2 interceptions.

Scotus star quarterback Tyler Palmer, returning after sitting out since the Lakeview win on October 11th, was a very efficient 10 of 12 passing for 138 yards with a pair of touchdowns before exiting with a tweak to the same injured ankle in the 3rd quarter.

Dalton Borchers then calmly stepped in to hit 3 of 5 aerials for 92 yards and a touchdown pass, one being a 30 yard toss to Oakley. Garrett Oakley would end the night with 124 yards receiving and a TD reception from each quarterback.

Columbus Scotus moves on to the Class C-1 quarterfinals to face Wahoo on the road next Friday. The Shamrocks just lost to the Warriors 49-0 on October 25th, one of the games Tyler Palmer missed.

The senior leader rushed an incredible 51 times for 178 yards and 4 touchdowns and completed 15 of 19 passes for an additional 185 yards and 4 more scores. Kant’s scoring runs covered 3, 6, 1, and 6 yards, the latter proving to be the winning score for the Eagles.

All four of Jaxson’s touchdown passes were gathered in by Ben Gebhardt, whose four TD receptions came from 55, 11, 26, and 23 yards. Gebhardt ended the game with a total of 9 catches for 183 yards.

It should be also be noted that 140 pound Trystan Scott had several good blocks in this game, especially on the tight end screens that were sent Ben Gebhardt’s way.

Jaxson Kant, who I believe is the best dual-threat quarterback in all of 8-Man football, has rushed for 1,342 yards (208 carries) and 19 TDs this season, and completed 67 of 116 for 1,234 yards and 19 more TDs. Kant is also a defensive stalwart, registering 46 tackles (40 solos), a safety, 2 INTs, 2 fumble recoveries and a pair of defensive touchdowns.

Ben Gebhardt has 29 pass receptions for 583 yards and 12 touchdowns to date. The senior is also one of 8-Man football’s most dangerous kick return men, brining back 12 for 374 yards and 3 TDs. On defense, Gebhardt leads the Eagles in tackles with 69 (41 solos). The 6-1, 180 pound senior star also has 5 TFL, 2 sacks, 3 interceptions, a fumble recovery and like Kant, a pair of defensive touchdowns.

Lutheran High NE enters the Class D-1 Round of 16 facing a road trip to unbeaten Howells-Dodge this Wednesday. Kickoff is set for 6:00. Mike Spiers Howells-Dodge won a regular season meeting between the two schools, 50-27.

The very versatile dual-threat QB Paxton Ross hit 10 of 12 passes for 282 yards and those six TD strikes to Huxoll, and also exploded for 191 yards rushing and 4 more touchdowns.

Cambridge will remain at home for the 2nd Round of the Class D-1 playoffs, facing Neligh-Oakdale this Wednesday with kickoff slated for 1:00.

*Nate Christensen, Jacob Hoffman-Plainview - Quarterback Nate Christensen completed 9 of 16 passes for 177 yards and a 41 yard scoring strike to John Schlote in Plainview’s 56-6 conquest of Randolph. The 5-8, 165 pound Schlote, by the way ended the night with 3 catches for 102 yards.

Christensen also carried the ball 9 times for 102 yards and scored the Pirates first touchdown of the game on a slick 43 yard run. Two time 1000 yard rusher Jacob Hoffman added 105 rushing yards with scoring runs of 46, 1 and 3 yards, as the Pirates breezed to a 30-0 halftime advantage. Hoffman 2019 rushing total stands at 1,242 yards.

8-1 Plainview now moves on to the Class D-2 Round of Sixteen, facing a long trip to meet defending state champion Johnson-Brock (7-2). Kickoff is slated for this Wednesday at 4:00 pm.

*Taylor Wemhoff, Justin Leifeld, Flyers defense-Humphrey St. Francis - Wemhoff reached paydirt from 46, 34, and 27 yards away, Leifeld added scoring jaunts of 11 and 7 yards, and the Flyers staunch defense was holding its 7th opponent in 9 games this year to six points or less, in St. Francis 68-6 route of Elgin Public/Pope John.

Unbeaten St.Francis advances to Round two of the Class D-2 playoffs this Wednesday and will entertain a 5-4 Lawrence-Nelson, who features 6-2, 270 pound running back Kyle Golay, an All-State defensive lineman the past two seasons. Golay has a 70 yard TD run this season.

*Brayden Zimmerer, Thad Hazen, Caden Wortman,Terance Burrell-Creighton - The defending Class D-1 Bulldogs enjoyed the return of last years State Championship hero, Brayden Zimmerer, who was a huge difference maker in the 2nd half of the Bulldogs 56-32 win over a fine Wisner-Pilger squad.

Creighton, who trailed the Gators 16-12 at halftime, rallied for 40 second half points, 30 of those coming in the 4th and money quarter.

Zimmerer, who missed the last two games with a knee injury, ended the night completing 8 of 8 passes for 166 yards and a 7 yard touchdown toss to Clay Curtis. The senior Zimmerer also rushed for 101 yards on 13 carries. The last full game Zimmerer play was on October 4th against Ainsworth.

Thad Hazen, one of three 100 yard Creighton rushers in the game, led the Bulldogs ground attack with 155 yards on 13 touches with scoring jaunts of 18, 39 yards. Caden Wortman aso chipped in 102 yards on 18 carries in the big win.

Creighton will advance to the Class D-1 Round of 16 and earn a home matchup with Osceola/High Plains this Wednesday. Kickoff is set for 4 PM.

*Hunter Charf, Aiden Kuester-Neligh-Oakdale - The Quarterback/Wide Receiver combination was party responsible for the biggest comeback victory in the opening round of the NSAA football post season playoffs, regardless of class.

Neigh-Oakdale, who trailed Atkinson West Holt 27-0 with 6:06 left in the 1st quarter, would rally to score the next 44 points, then turn back a late effort by the Huskies to hold on to the 44-27 win.

QB Hunter Charf cashed in on 19 of 28 pass attempts for 328 yards and 5 touchdowns to buoy the incredible comeback. Three of Charf’s five TD tosses were caught by Freshman Aiden Kuester and covered 30, 28 and 12 yards. Kuster finished the evening with 5 receptions for 127 yards.

Charf was held to 25 yards on 22 carries, but still was able to squeeze out two critical 7 yard TD runs in the win.

Neligh-Oakdale advances to Round 2 of the D-1, Eight-Man playoffs and will make the 221 mile trip to Cambridge Wednesday to face the unbeaten and red hot Trojans. Kickoff is set for 1PM.