GI Northwest unleashes the demons in 49-13 route of Hastings. 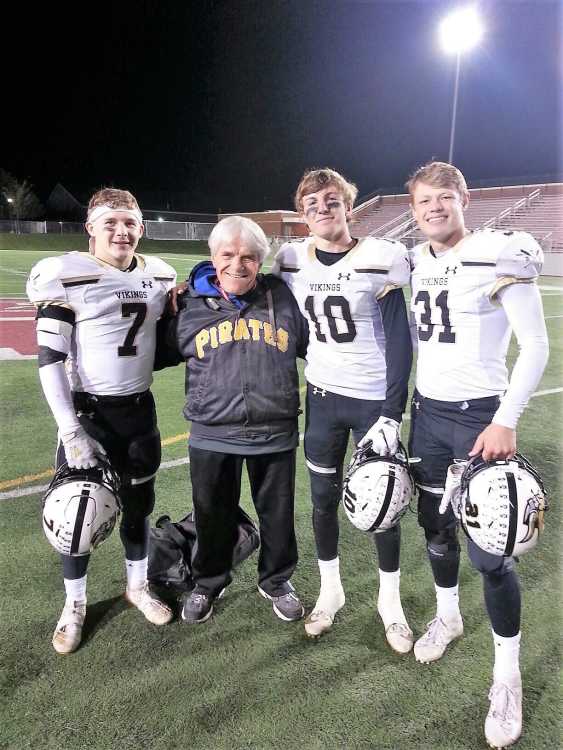 Man, Woman, Child did Northwest head football Kevin Stein ever turn the demons loose in the Class B, District 3 Championship game against Hastings. The Vikings “demons” came in the form of Quarterback Rans Sanders on offense and All-State defensive line monster Grady Griess, plus headhunting linebacker Ty Heaton on defense.

Stein’s Vikings offense, who had not produced a 100 yard rushing performance from any ball carrier all season long, turned senior Rans Sanders loose for 177 yards on 18 carries and three touchdowns, 134 of that ground yardage coming before halftime.

The Hastings defense must have thought they were seeing a demon for sure in Mr. Sanders when the Northwest field general completed 13 of his 18 passing attempts for 152 yards, that also coming before halftime.

In fact, Rans Sanders was so efficient on offense that Northwest was able to build a 35-7 halftime lead, on their way to a surprisingly easy 49-13 win over the 7-1 Tigers.

How miserable was it for Synek?

Putting it simply, the defensive level of pressure applied, especially by Griess and Heaton, was so intense that by the time halftime had arrived, the Hastings gunslinger had completed just 6 of his 12 passes for a meager 40 yards.

When Synek attempted to run the football, it was slimmer pickens yet. Jarret Synek, who already has a 100 yard rushing game under his belt this season, was swarmed under the minute he received the snap from center, ending the first half with a total of just three yards on ten carries.

Oh, those Northwest defensive demons. It’s enough to cause some serious nightmares, especially to a quarterback that was a record breaker the week before. But don’t lay the blame on Jarrett Synek. The guy never had a chance to breathe.

This game was eerily similar to the mastermind plot Kevin Stein put together on October 8, 2012, when his Northwest team made the trip to Aurora and laid an unthinkable 54-0 embarrassment on the Huskies, and you know what? The demons Stein turned loose on that October night in that Aurora were nearly identical to this night. Only the names were different.

On offense it was a strong passing quarterback/turned rusher named Zach Rouzee, a hard charging running back by the name of Kyle Bockmann, and a pair defensive devils who went under the names of Cole Leaman and Connor Eberhardt.

Northwest wasted little time turning loose their offensive ‘demon” Rans Sanders. After forcing a Hastings punt, the Vikings set up shop deep in their own territory at the 14 yards line. After first down incomplete pass by Sanders, it was time fo the senior leader to go to work on Northwest’s initial drive of the football game.

On second and 10, Sanders split the Hastings defensive line with a nifty 19 yard quarterback draw. Back in my day, the play was termed “student body right”. The next play Sanders hit junior Riley Anderson for 9 yards and before the opening drive was in the books, Sanders had connected with Anderson for gains of 9 and 7 yards, and ripped off runs of 12 and 11 yards himself, the latter being a touchdown run.

An 86 yard drive in 8 plays that consumed just two minutes six seconds, and Rans Sanders was responsible for 42 yards rushing and 25 yards passing. The offensive demon had been unleashed and would continue bedeviling Hastings until the halftime break arrived.

Sanders tacked on a 12 yard scoring run in the first quarter to give the Vikings a 14-0 lead, then Sam Collins and Ty Heaton got into the act in quarter number two.

The speedy Collins zipped though an opening at the line of scrimmage and outraced the Tiger secondary for a 37 yard scoring samper, then defensive demon Ty Heaton turned into an offensive goal line running weapon to add a pair of short touchdown runs from 1 and 8 yards out.

Hastings actually tightened up things defensively to begin the second half, holding Sanders at bay for only 8 yards on 4 carries on the Vikings opening drive of the third quarter. But Northwest broke Tigers back by converting back to back 4th down plays, then turning Rans Sanders loose for a highlight reel 42 yard touchdown run that displayed the splendid senior’s uncanny balance and his ability to stay upright while in flight.

Twice during his 42 yard journey, Sanders nearly fell to the artificial turf, only to regain his balance, make a couple of sweet cuts, then waltz in for the score that kicked in the running clock.

Sam Collins then logged his second TD of the game on a 4 yard dash with 54 ticks left in the 3rd quarter, stretching the Northwest lead to 49-7.

Hastings put another touchdown on the board a few minutes into the 4th quarter when Carson Shoemaker, son of Hastings head coach Charlie Shoemaker, reeled off a 28 yard scoring dash that would have made any and all contestants on “Dancing With The Stars” jealous with his twinkle toes moves.

In the passing department, Sanders connected on 13 of 18 passes for 152 yards.

Zaide Weidner led the Hastings rushing game (119 yards) with 62 yards on just 4 carries and a touchdown.

Tiger quarterback Jarrett Synek was held in check on this night, hitting 10 of 19 aerials for 101 yards.

A word of advice concerning Jarrett Synek. Do not think for a moment that this young man cannot throw the football. If you are in his shoes, you have to flush a game like this from your memory.

A quarterback doesn’t pass for 2,034 yards, hit 25 touchdowns and suffer only two picks and not possesses a high level of talent. Any opponent would be kidding themselves to think Synek is incapable of inflicting great damage through the airwaves.

Both Northwest (8-1) and Hastings (7-2) advance to the Class B playoffs which begin next Friday. Northwest should host a first round game, as should the Hastings Tigers. The NSAA normally releases those playoff brackets Saturday morning.