Pierce scores early and often to cruise past Boone Central/NG, 55-20. 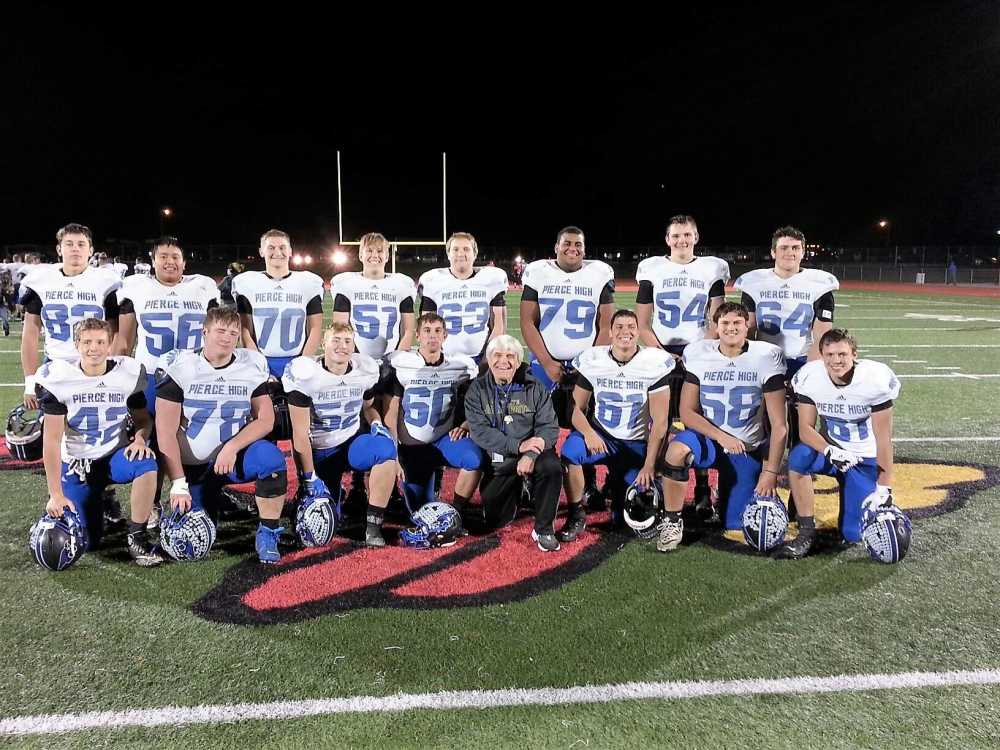 Pierce has rotated these 15 offensive and defensive linemen in and out of games all night long, all season long. It's a small wonder they are undefeated and have three thousand yard rushers in the backfield.

The Pierce Three Horsemen back were back intact Thursday night and Boone Central/Newman Grove felt the sting as Bluejays raced to a 42-7 halftime lead, then cruised in for a 55-20 win.

Pierce quarterback Dalton Freeman, who suffered a collarbone injury on the second play of game in Ord back on September 13th, was back under center on this night to direct the opening half onslaught.

Freeman, who was an All-State defensive back a year ago for the Bluejays, actually saw limited action a week ago in Pierce’s 60-6 win over West Point-Beemer, but kept it as a “light duty” assignment.

Tonight the magical Bluejay quarterback showed no signs of rust on offense or defense and like the other two Horsemen, halfback Carson Oestreich and fullback Brett Tinker, were needed only in the first half.

It did not take long for Pierce to strike after the opening kickoff. With terrific field position at their own 44 yard line, QB Dalton Freeman fed the pigskin to Carson Oestreich for consecutive gains of 9, 6, 4, and 6 yards, then decided it was time to test the waters himself.

Freeman’s intital carry of the night was a twisting, cutting, flowing sweep to the right side, that netted 18 yards to the Boone 14. The next play, same call, same result, and Dalton was dancing into the endzone on a 14 yard scoring dash.

Actually, this may or may not have been the correct version of the Pierce O-Line on that opening drive of the game due to the fact head coach Mark Brahmer runs 15 different offensive and defensive linemen in and out of those Bluejays trenches.

The entire O and D-Line operation is not only mind boggling, but incredible to witness. Asst Coach Tyler Legate also looks to be a major part of this masterful plan of rotatating those big boys in and out without losing any talent level in the process.

Reminds me of the Mark Wortman/Elkhorn High days back in the late 1980s and all through the 1990s when Wortman would alternate his entire offensive line every other possession. And if you wonder it that was a success or not, take a peak at how many Antlers Class B State Championships and Runner-Ups occurred in that era.

It didn’t take long for the Blujays to follow up that first score by Dalton Freeman. In fact, it was Dalton Freeman who picked off Boone Central/NG’s first pass attempt of the game on the Cardinals opening possession.

Pierce would go on to score on every first half possession without attempting a punt. Well, I’d better explaing that one.

It took just one play following the Freeman interception for Brett Tinker to roll 25 yards for a touchdown that gave Pierce a 14-0 lead. But it was on the Bluejays very next drive that a punt “almost “ happened.

A booming punt by Boone Central/NG’s Blaine Young had pinned Pierce back on their own 10 yard line. The Three Horsemen combined to move the ball all the way to their own 49 yard line when the Bluejays were flagged for a holding call.

The penalty moved the ball all the way back to the Pierce 32, the Cardinals defense got tough and actually forced the Bluejays into a punting situation. Pirece punter Logan Moeller got the kick away but Boone was flagged for roughing the punter.

The penalty yardage was not near enough for a Bluejay first down, so Brahmer left the punt call on...or so we thought.

The snap from center never made it back to Moeller. Instead, it was short snapped back to the normal Pierce center Dylan Svoboda, who was back in a short blocking position.

I’m telling you, Svoboda must have imagined himself as one of the Three Horsemen, blasting over his left side somewhere around the Pierce 43, mowing over Boone defenders until a covey of Cardinals tried to gang tackle him.

I swear Svoboda had to drag that pile an extra 8 or 9 yards downfield, not going to the artificial turf until he had rambled 17 yards for the first down at the Boone Central 40.

A few plays later, Brett Tnker scored his second touchdown on the contest and Pierce had themselves a 20-0 first quarter advantage.

Dalton Freeman connected with Carson Oestreich for a 19 yard scoring strike at the 9:56 mark of the 2nd quarter before the Cardinals hit the board for the first time in the half with a nifty 31 yard scoring toss from sophomore quartertback Brandon Benes (pronounced Benish) to a streaking Dylan Korth.

Carson Oestreich would add his second touchdown of the game with a 3 yard run at the 4:10 mark of the 2nd stanza, then go in for his third score from 9 yards out a minute, fourteen seconds before halftime.

That 9 yard Carson Oestreich touchdown was set up by an brilliant 48 yard run by Brett Tinker. It was “vintage Tinker” all the way, that saw the speedy Pierce fullback start to his left on a jet sweep from his own 17 yard line, hit the brakes and completely reverse his field back to the right, then cut back all the way across the field before finally being brought down at the Cardinals 35.

The entire second half was played with a running clock. The Pierce Three Horsemen did not return to offensive action during that second half, but reserve fullback Dean Orwig did his best Brett Tinker imitation, bolting right up the gut on a quick hitting 58 yard scoring jaunt.

The Bluejays David Dale went in to score from a yard out to begin the 4th quarter, giving Pierce a 55-7 lead before Boone Central added a pair of touchdowns against the Bluejays, who were clearing their bench.

Boone Central’s final score of the night was particularly impressive when 5-11, 155 pound sophomore Cody Maricle carried the ball 7 times for 38 yards before smashing in for a well earned two yard touchdown run.

It was another big offensive night for the brutal Pierce running attack. Ten different Bluejay running backs touched the football for a total of 507 yards on just 48 carries. Carson Oestreich led the way with 120 yards on 18 carries and 3 TDs.

Brett Tinker added 119 yards and just 7 totes, and that lifts Tinker over the 1000 yard rushing mark for the second consecutive season and unofficially put his season total at 1,006 yards.

Dalton Freeman carried only five times on the night, but still rushed for 89 yards and a touchdown. He also completed 5 of 7 passes for 53 yards and a score.

Benes also completed 8 of 18 aerials for 145 yards and two touchdowns, but also suffered a pair of interceptions. I was impressed with his overall play.

Boone finished the 2019 campaign with a 2-7 record, but graduates only 4 seniors and has a strong sophomore class and very strong middle school program that should bring Mark Hudson’s Cardinals back to prominance once again.