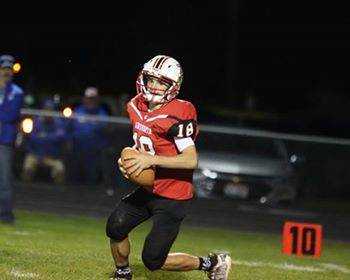 Ainsworth sophomore Caleb Allen rushed for 5 scores and passed for and additional 5 touchdowns in the Bulldogs win over Niobrara/Verdigre last week. *(photo courtesy of Jennifer Osborn)

*Caleb Allen - Ainsworth - 5-9, 140 pound Dual-Threat Quarterback crashed over the 1000 yard mark in both rushing and passing yards in last week’s 82-65 win over Niobrara/Verdigre.

Young Caleb Allen piled up an astounding 568 Total Yards and 10 touchdowns in the game, giving Ainsworth their first win of the 2019 season. Allen rushed the football a staggering 48 times for 342 yards and 5 TDs in the win.

The sophomore QB’s passing statistics were even more amazing or shall we say, maybe even a bit head-scratching.

Entering the Niobrara/Verdigre game, Caleb had completed only 36% of his 169 passes, yet managed to pile up 781 yards with 11 touchdowns. He also suffered 9 interceptions, which can be damaging if they occur at critical times.

Forget about those previous INTs reoccurring in last week’s game. Allen put the ball in the air 34 times, only completing 12 of those (35%) for 226 yards, but 5 of those babies went for touchdowns.

Wrett Killian latched on to four of Caleb’s aerials for 122 yards and a pair of scores. Grant Stec had 5 receptions for 74 yards and another pair of TDs, while Dylan Graf caught one pass from one yard out, for one touchdown.

Those statistics are just flat out mind-boggling considering the fact the kid plays for a team that has won only once in six outings this season. But one of the problems this football team faces year in and year out, is the fact that Ainsworth is a perennial powerhouse in Boys Cross Country, which runs the same time football does.

So, considering all these facts, this guy thinks that Mr. Caleb Allen is a very special football talent and just a sophomore to boot.

QB Cole Payton hit 10 of 16 passes for 307 yards and 4 TDs in the big win that saw the Warriors score 4 touchdowns during a six minute span in the first quarter.

*Tyson Gordon-Omaha Skutt - Was “The Man” in Skutt’s amazing 28-21 double overtime victory over a fabulous Waverly team last week. The amazing Skyhawk athlete ran for 127 yards on 24 carries and scored every single Skutt touchdown on runs of 3, 53, 2, and 10 yards.

Tyson Gordon’s 10 yard scoring scramble around the left side was the game winner in overtime number two. Gordon had to gut that baby out after being knocked coo-coo on a tough at the conclusion of the first OT.

There just are not enough words to describe the vast athletic talents of this young man.

*Jay Ducker, Nate Glantz, Thunderhogs - Bellevue West - Running out of words to describe this guy too. The “Ferrari Sergio Pininfarina” of Nebraska prep running backs may be appropriate title here.

In the Thunderbirds 63-0 win over 4-2 Omaha South, Jay Ducker rushed the football only nine times, but gained 115 yards and ran for TDs covering 45, 18 and 8 yards. The 115 yards vaulted the smooth as silk Ducker over the thousand yard mark for third straight season.

The Bellevue West sensation gained 1,707 yards as a sophomore, 1,813 last season as a junior, and has already bolted for 1,032 big ones with 18 TDs in seven games this season.

Thunderbird quarterback Nate Glantz also hooked up with Husker commit Zavier Betts for scoring passes covering 42, 12 yards in the lopsided win. Glantz completed 8 of 12 throws for 206 yards with 4 TDs, while both of Betts receptions (2 fo 54), went for scores.

*Eddie Gonzalez-Minden - Finally! After flirting with that 1000 yard rushing mark the past three seasons, the shifty Whippet runner was finally rewarded for his hard work, and wouldn’t you know it, it came in a 55-0 loss to powerful Adams Central.

Steady Eddie ran for 88 tough yards on 25 carries against the stout Patriot defense, giving him a glorious 1,085 yards rushing through seven games in 2019. To illustrate how hard this dude has worked the past 32 games, check this out.

Eddie Gonzalez has run for a fat 3,169 career yards, despite the fact his team has gone 12-22 during that span. Also take into consideration, the guy missed some time last season with some injuries.

*Hunter Washburn-Ashland-Greenwood - Bluejay QB helped his team pull away from a spirited Lincoln Christian team in the 4th quarter to post a wild 57-34 victory over the Crusaders.

Washburn connected on 13 of his 16 pass attempts for 224 yards and three TDs to keep Ashland-Greenwood unbeaten in 2019. Hunter tossed two scoring strikes to sophomore Cale Jacobson (28, 56 yards), who had five catches for 120 yards and a 20 yard fumble recovery touchdown.

Washburn’s other scoring pass went to Lane Zimmerman and covered 59 yards. All-Stat Utility man Bryce Kitrell had a 2 yard rushing TD in the contest as well as a 35 yard punt return score.

Haughton once again came up huge in the game, completing 11 of 14 passes for 180 yards and Six Touchdowns.

The junior sharpshooter threw three TD passes to Isaasc Gleason, who grabbed 7 receptions for 108 yards in the game. Haughton also found the elusive Cole Horacek for three scores. Horacek caught only 3 passes all night for 67 yards with each reception going for a TD.

*Nick Sich - Papillion La Vista South - The fine Titan runner blasted for 178 yards on just 14 touches in Papio South’s 50-14 spanking of Bellevue East. Sich reached the end zone with runs of 26, 37, and 16 yards in the route.

Zach Smith did not have to throw the ball much, but when he did, the junior QB was deadly. Smith completed six of seven passes for 141 yards and 2 TDs in the 39 point route. The other scoring pass of 25 yards was hauled by Riley Werner, who now has 533 receiving yards and 4 TDs for the season.

*Braden Klover-Southern - Ran for 135 yards on 16 carries and two touchdowns despite the fact his team dropped a 60-36 decision to Elmwood-Murdock. The hard charging senior now has 796 yards and 12 TDs for the season.

All-State quarterback candidate Austin Endorf completed 19 of 27 passes for 228 yards against a normally stout Monarch defense. RB Ethan Mullally scooted for 120 yards on 26 yards and a 2 yard touchdown run in the contest.

The Tiger defense was simply outstanding in the historic win, limiting Aquinas to just 130 yards of total offense.

*Gage Tighe, Jason Classen-Stanton - Rushing duo helped Stanton notch their initial win of the 2019 season. In the Mustangs 26-14 over Ponca, Tighe, the 5-10, 175 pound junior, ran for 157 yards on 23 carries and three touchdowns, while freshman running mate Jason Classen chipped in 122 yards on 16 totes in the win.