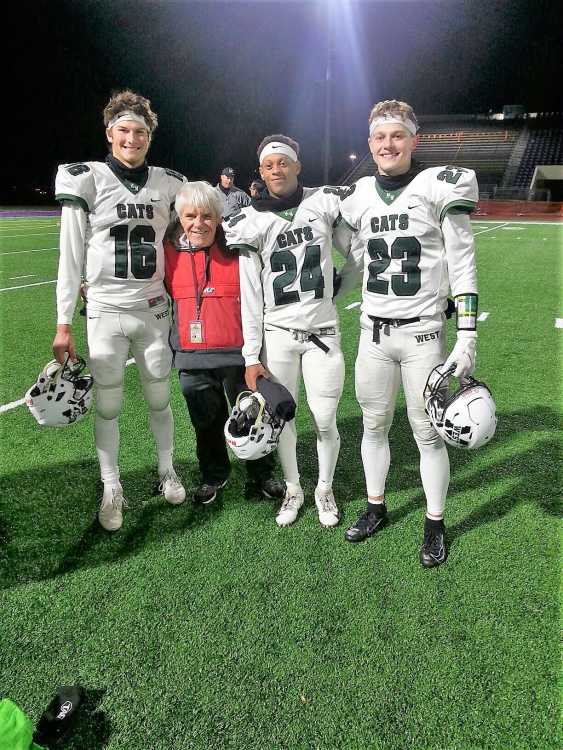 Strange things can take place when two undefeated Class A football teams get together late in the football season. Like winning nearly every single statistical category in the game except the one that counts……...on the scoreboard.

It happened to Grand Island tonight in the Islanders 20-7 loss to #2 rated Millard West. Sure, GI knew the Wildcat offense had the potential to pass, as well grind out the yards rushing the football, but when your own offense:

A normal football fan would think Grand Island would be the victor in this baby.

Didn't happen. How many times have we heard the phrase “games are not won on paper?”

First things first. Millard West looked much bigger in the trenches on film and did in person tonight. But the Islanders have beaten those odds before and set the tone for overcoming that disadvantage on Grand Island’s very first play from scrimmage.

It was a thing of beauty. Running back Caleb Francl took the jet sweep handoff from Carson Cahoy, appeared to be trapped in the backfield by the swarming Millard West defense, but somehow broke free, made the corner and sprinted 74 yards down the GI sideline for a touchdown.

Sixteen seconds after the Islanders laid their hands on the football for the first time in the game, it was 7-0 GI.

Only one problem. I figured that trend would not continue, Millard West coach Kirk Peterson probably knew the same thing, as well as Islander head man Jeff Tomlin. But hold on.

Brando Mendez kicks off for GI, Millard West’s Dan Sullivan returns the ball from the 5 to the 23, then takes the handoff on the very next play and Boom!

GI’s Ayden McDermott separates Sullivan from the football, teammate Kyle Sextro recovers it, and suddenly the Islanders are in business at the Wildcat 26 yard line with a chance to deliver a crushing blow.

Didn’t happen. Four plays later, Caleb Francl carries on the same play that yielded the 74 yard touchdown, but Millard West linebacker linebacker Brock Wyman is there to apply a crushing hit, knocks the ball free and recovers it himself.

Disaster averted and the reality of the defensive battle sets in just as did in both meetings between these two powerhouses a year ago.

Both defenses then took over, as they should have. You know, Millard West was only giving up 199 yards a contest coming in and GI wasn’t was far behind, allowing just 217. Would Grand Island’s 7 -0 lead hold up until halftime?

With 6:49 in the 2nd quarter showing on the refurbished Memorial Stadium scoreboard, Kirk Peterson’s boys took the ball 65 yards in just six plays to cut the lead to one. And Millard West’s scoring play was a thing of beauty.

Wildcat RB Ethan Valencia was flanked out on the left wing, held his position for a count of two, then came back on jet sweep play, but cut upfield off the “A” gap, going in virtually untouched for a 10 yard TD gallop.

Jackson Neumann’s point after kick attempt drifted wide left and it was 7-6 at the half.

The way the opening half went, you had to wonder if that missed PAT would come back to haunt the Wildcats.

Stifling defensive play by both teams continued to dominate a fast moving 3rd quarter until something had to give. You had to wonder two things:

1) How long would it take for GI’s Carson Cahoy to hook up with All-State WR Brock Douglass for a touchdown?; And….

2) How much time would run off the clock until 6-5, 195 pound Millard West QB Tristan Gomes to hook up with All-State prospect Dalys Beanum for a score?

Well, it was Tristan Gomes who went to work at the 2:43 mark of the 3rd quarter with the football on the ‘Cats 39 yard line.

It appeared to me, maybe the Islanders Broc Douglass and Ace McGinnis, normally gifted defensive backfield stars, may have gotten crossed up on coverage assignments, which allowed first class receiver Dalys Beanum to get wide open for a huge 46 yard gain to the Islander 17 yard line. That started the Millard West offensive wheels rolling.

The Wildcat’s Dan Sullivan then forged ahead to the GI 12, where the Islanders were flagged for their second personal foul face mask penalty of the contest.

Two plays later, Tristan Gomes spotted a height mismatch and sent 6-3, 200 pound WR Kaedyn Odermann to right side of the end zone, nailing him for a 6 yard touchdown.

Ethan Valencia then took a delayed handoff in for the two-point conversion and Millard West had 14-7 lead heading into the 4th quarter.

The stingy Millard West continued their great play into that money quarter, forcing an Islander punt after a couple of GI first downs. Then came the killer drive by the #2 Wildcats.

The killer drive culminated with Gomes spotting another six inch height advantage, then once again nailing Kaedyn Odermann, this time with a 38 yard scoring strike. The PAT attempt again sailed wide left, but the Wildcats had themselves a 20-7 lead over Grand Island with 4:58 left in the contest.

Gaven Aken then gave the Islanders great field position af their own 40 after his sparkling 21 yard ensuing kick-off return.

Carson Cahoy then went to work , completing 7 of 10 passes on a drive that would eventually stall out at the Millard West 23 yard line. Cahoy teamed up with the amazing Broc Douglass for three completions on the drive, wth Caleb Francl for two more, and Kyle Sextro and Matt Jurensmeier for on apiece on the 37 yard journey upfield.

The stout Islander defense still would not give up, forced another Millard West punt, then put on quite a spirted drive starting at the GI 33 yard line with just 1:05 remaining in the game.

The drive stalled out at the Wildcat 5 yard line when Douglass had bulled his way from the 12 to 5 yard line at that point, but an offensive personal foul by a GI lineman (for continuing a block after the whistle) moved it back to Millard West 20.

Cahoy did hit Jurgensmeier with that final pass, but the ball went over on downs and the game was in the books.

Tristan Gomes completed 10 of 14 aerials in the Millard West win for 217 yards and a pair of scoring tosses. The brilliant Dalys Beanum caught six of those throws for a big 136 yards. Kaedyn Odermann reeled in the other4 passes for 81 yards and the pair of TDs

The Millard West ground attack of 119 yards was paced by Ethan Valencia, who ran for 54 yards on 11 carries and a touchdown. Gomes was not far off with Ethan’s pace with 47 yards on 12 attempts.

Carson Cahoy sent 44 passes skyward in the game, completing 26 of those for 244 yards. Broc Douglass caught 12 of Cahoy’s passes for 139 yards to lead all receivers.

The Islander ground attack of 92 rushing yards was led by Caleb Francl’s 104 yards (let me explain).

So potent was Millard West rushing defense, that the only other Grand Island rushes were by Gaven Aken (4 for a minus 2), Ace McKinnis (3 for a minus 2), and Cahoy (10 for a minus 8), which netted a minus 12 yards. (you can do the subtraction)

For the Grand Island “D”, it was Jordan Hofeldt with 11 tackles (10 assists) and Caleb Francl with 9 stops (8 assists) leading the way. Ace McKinnis added 8 more, with Broc Douglass chipping in with 7 tackles.

Millard West, now 7-0 will host Lincoln East next Thursday at Buell Stadium, while the Islanders travel to Seacrest Field in Lincoln to play a tough Lincoln Southeast team.