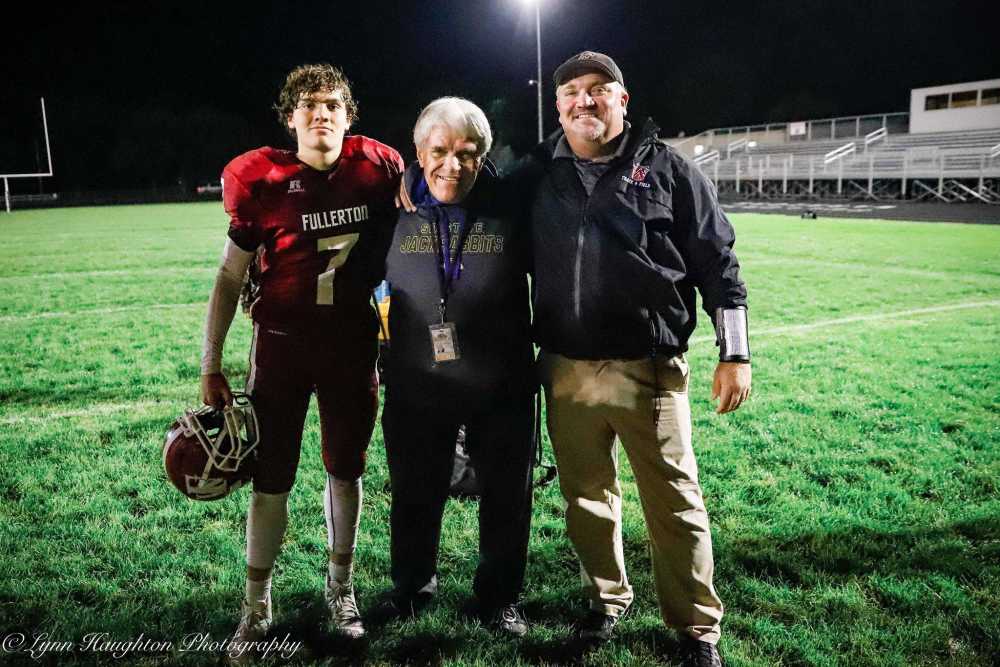 Haughton, the junior field general and son of head coach Ryan Haughton, ended the night completing 10 of 18 passes for 160 yards and 4 touchdowns covering 36, 37, 7 and 2 yards. The junior quarterback also score on a one yard run and reversed roles with Cole Horacek to catch a critical 8 yard TD pass.

Horacek (pronounced Hor-eck) finished with 6 receptions for 110 yards in the win, reeled in three of Hunter’s touchdown passes (36, 37, 7 yards), scored on a 2 yard jet sweep in the first overtime, and threw the 8 yard TD pass to Hunter Haughton with 1:24 left in regulation. That score eventually sent the game into overtime.

Hunter Haughton is having a fine year at quarterback, having competed 61 of his 108 passing attempts (57%) for 1,028 yards and 16 touchdowns. That’s a scoring toss every 3.8 times he puts the ball in the air. The young man is poised, confident, and plays like a coach on the field. Gee, I wonder why?

And Cole Horacek? You will not find his name leading many categories on that Fullerton stat sheet. The guy is just a jack of all trades, a swiss army knife if you will, on the football field. He’s everywhere and is always around to make a big play when Fullerton needs. Very unselfish football player.

Cole Horacek typifies this Fullerton football team. Many are interchangeable as far as positions go, but when you are down to sixteen players for a game and 21 when it’s good, you all play as one and do what is asked of you..

That’s why I love this football team…..All Grit and Never Quit.

*JACOB KEISER-Hartington Cedar Catholic - I had to call your attention to this marvelous, two time 1000 yard rusher, at long last, returning to action in 2019.

On of the state’s most talented runners the past two years, Jacob Keiser suffered a real setback while attending a summer football camp at South Dakota University back in June of this year.

The two-way Cedar Catholic star suffered a badly broken foot that would end up shelving him until September 13th. Keiser saw limited action playing against powerful David City Aquinas, but still exploded for 88 yards on just 4 carries. Then it happened…..again, a re-broken foot.

So, Keiser went to Sioux Falls, a surgeon inserted a plate in his foot, and despite not having an opportunity to practice, he was cleared to play against Norfolk Catholic last Thursday afternoon, October 3rd.

The rest of the story? Jacob Keiser carries the ball 24 times, roars for 256 yards and scores touchdowns covering 41, 2 and 6 yards, as Cedar Catholic lays a 34-7 loss on Norfolk Catholic. Unbelievable.

The speedy duo of RB Cale Conrad and Dual-Threat QB Heindrich Haarberg inflicted the damage on offense. While those two were doing their thing on that side of the ball, the sophomore Mahoney was doing some serous head-banging on the defensive side for Kearney Catholic.

Cale Conrad, the 6-0, 180 pound junior, darted for 150 yards on 16 carries and caught a slick 44 yard scoring pass that caught Sutton napping. That will go down as one of my favorite plays of 2019. Haarberg also cracked the 100 yard rushing barrier with his 125 yards on 16 totes which included a 22 yard touchdown run to the left corner of the end zone.

The sprinter-speed Stars QB also completed 9 of 19 passes for 135 yards in the win.

Meanwhile on defense, Brent Mahoney, a wizard on the Kearney Catholic hardwoods, was all over the field, logging a career high 24 tackles with 16 solo crunches.

Hold on. And you thought maybe Mahoney didn’t play offense? Think again. You know those 9 completions Heinrich had in this Sutton game? Brent Mahoney caught five of those 9, for 95 of the 135 yard total passing yards.

Looks like Mr. Mahoney has some serious all All-State potential in two sports that I know of.

Kearney Catholic is currently rated #10 in Class C-1 and is sitting at seventh in the wild card standings right now. Of all the teams in Class C-1, this is the team you do not want to meet in the opening round of the playoffs, period.

I’ve seen too many instances over the past several years where Coach Harvey or Coach Colling has this team ready to play when the post season rolls around. Kearney Catholic always has above average speed and this bunch fears nobody.

Never overlook this football team when November arrives. There’s always magic in the air around 110 East 35th Street that time of year.

*Drake Spohr-Elmwood-Murdock - One of my favorite Eight Man football players, Spohr rambled for 254 yards on 28 carries and a pair scores in Elmwood-Murdock’s exciting 38-30 win over Weeping Water.

*Will Gatzemeyer, Kobe Lyons, Dylan Beutler-BRLD - Cougars trio came alive in the second half to turn a 21-20 halftime advantage into a 65-20 route over a determined 2-3 Tekamah-Herman team.

QB Will Gatzemeyer accounted for a massive 352 total yards in the game. The All-State athlete completed 7 of 15 passes for 164 yards and 4 TDs and rushed 16 times for 188 yards and two more scores. Kobe Lyons also chipped in 114 rushing yards on 17 attempts with 2 TDs.

Dylan Beutler caught two Gatzemeyer passes for 82 yards with both going for touchdowns. Will’s other two scoring passes were gathered in by junior Lucas Vogt and senior Jaxon Johnson.

Offensively, Gatzemeyer has accounted for a staggering 2,227 total yards, and on the other side of the ball made 40 tackles and intercepted 5 passes. It would certainly be an understatement to say that this young man is a very special player.

*Braden Klover-Southern - Oh Mama, do I like the way this kid plays the game of football. In Southern’s wild and wooly 60-48 victory over Thayer Central, the 6-2, 210 pound senior carried the ball 37 times for 305 yards and went on scoring jaunts covering 17, 32, 3, and 9 yards. He also had half a dozen tackles on defense for the 4-1 Raiders.

For the season, Braden Klover has gained 661 yards rushing with 10 TDs, with 28 tackles, 3 sacks, a fumble recovery and and interception on defense.

Put this dude in somebody like Creighton or the Howells-Dodge backfield and he would get you 1,800 yards in a season.

*Jeffrey Schmeits, Michael Bernt-Riverside - Schmeits, the 6-0, 160 pound junior, toted the ball only 6 times in Riverside’s 62-6 win over Elgin Public/Pope John, but raced for 141 yards and 3 touchdowns. He also caught a six yard TD pass and made 7 tackles on defense.

QB Michael Bernt hit 9 of 11 passes in the game for 109 yards and three TDs. Besides Schmeits, sophomores Tony Berger and Lane Swerczek also had touchdown receptions. Bernt also recorded 7 tackles and an interception on defense.

Big 6-2, 215 pound defensive end Keaton Carraher led the Chargers defense as usual, with 13 stops. The tough senior G/DE now has 49 tackles with 8 TFL on the season for the 4-1 Riverside Chargers.

*Wyatt Wagner-CWCE (Chambers/Wheeler Central/Ewing) - 5-6, 160 pound senior back ran for 109 yards on 15 carries with touchdown runs of 42, 9, and 3 yards in the Renegades 42-6 in over O’Neill St. Marys. Senior Bryson Abbott also carried the ball only twice in the game, but rambled for 60 yards. One of those totes, by the way, went 56 yards for a touchdown

Sophomore Jackson Waldo (5-7, 150) was a force on defense in the St. Marys win, making 17 tackles. This youngster has been a model of consistency all year on defense, piling up 49 stops, 22 of which were solo tackles.

The dude is also a valuable weapon as a kick-off man, averaging 49 yards a boot. In the St. Marys game alone, Waldo kicked off 6 times with 4 of those going for touchbacks, and when your team is currently 5-0, rated #7 in Class D-2, and flirting with the #1 seed in the West bracket of the D-2 playoffs, those touchbacks may just come in handy during the post season.

Wyatt Wagner, by the way, has been one of the key cogs in the CWCE machine this season, rushing for 798 yards and 15 TDs, plus making 28 tackles on defense.

Kant not only rushed 23 times for 133 yards and a 3 yard touchdown, but picked up two Elkhorn Valley fumbles and returned them both for touchdowns (31, 25 yards). The versatile Eagles QB also threw for 84 yards in the win.

Sam Jagels was also a force in this one, rushing 9 times for 91 yards with TD dashes of 20 and 31 yards. Big Ben Gebhardt had his usual monster night, catching 4 passes for 74 yards, making 13 tackles on defense with a sack included.

Oh, about that two game losing streak Lutheran High Northeast suffered? One was a loss to current #1 Howells-Dodge. The other to current #2 Wakefield. That’s forgivable.

*Rans Sanders-Grand Island Northwest - The GI Northwest QB/FS/Punter did it all in the Vikings 38-20 win over a stubborn Beatrice team. Sanders, who is also an outstanding baseball player, completed 12 of 19 passes for 116 yards and a pair of TDs, rushed for an additional score, plus made 10 tackles on defense for Coach Kevin Steins 5-1 and 4th rated (Class B) Vikings.

On defense, Hartman and Sanders were both standouts, as well as Ty Heaton. While it’s difficult to tabulate tackles for this football team because of the abnormal number of assists credited to players, it is evident that Northwest defensive guys are swarming to the football.

You couple that with the versatility the offense has shown this season, and you may have a Viking team that has the ability to make a deep playoff run. Stay tuned.

*Brody Nelson-Beatrice - Despite the fact Beatrice dropped an 18 point decision to GINW, Brody Nelson, the 6-0, 185 pound junior running back, turned his best game of the season. Nelson rushed for 203 yards on 19 carries and a touchdown, caught 2 passes for 19 yards and a second score, and made 5 tackles on defense.

Nelson has turned up the heat the past two weeks for the Orange, gaining 343 rushing yards, which swell his season total to 755. Not bad for a back toiling for a 2-4 football team.

*David Lilly-Bishop Neumann - Ran for 116 yards on 16 touches and hit the end zone with runs of 13, 2, and 12 yards in the Cavaliers heartbreaking 33-32 loss to Columbus Scotus.