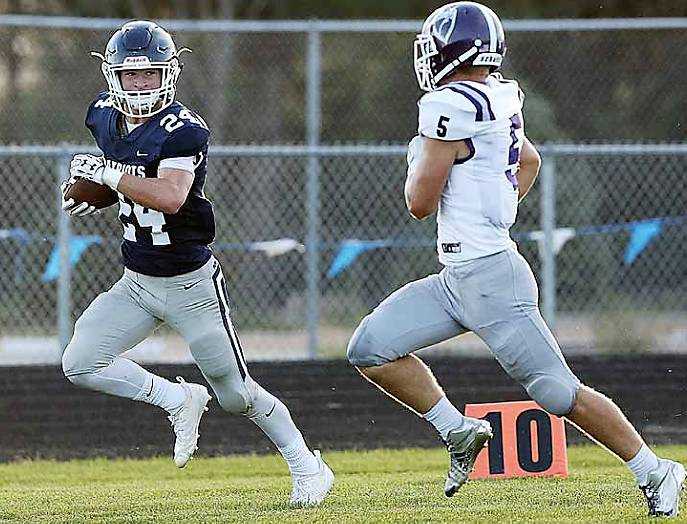 The versatile Adams Central athlete also has two receiving touchdowns this season and even threw a touchdown pass on opening night against defending C-1 champion Aurora.

The Patriots already have one the best quarterbacks in 11-Man football in Evan Johnson and finest wide receivers in the 11-Man game with Leif Spady, who is a breakaway threat with every reception he gathers in.

Throw in some of the best offensive boys in the trenches and you have a potential Class C-1 championship team.

*Jarret Synek-Hastings High - Just across the town of Hastings is another magic player in Tigers terrific quarterback, Jarret Synek. The mobile, 5-11, 185 pound junior sharpshooter is simply a big time player that comes up big time in big time games. On opening night, Synek engineered a shocking 30-7 win over McCook, completing 21 of 31 passes for 321 yards/2 TDs.

He pulled a repeat performance last Friday as the Tigers blanked York, 41-0. Synek used both his arm and legs in the York win, completing 34 and 5 yard touchdown passes to Zach Weidner, and a 42 yarder to Carson Shoemaker. Jarret also ran in a pair of scores from 1 and 15 yards out.

Jarret Synek, who cracked the 1000 yard passing barrier a week ago against Gering, unofficially threw for 199 yards against York and now has 13 passing TDs and 7 rushing scores in 2019.

Hastings, who has four wins in a row, is currently rated #6 in Class B and has games remaining at Seward, then home tilts with Beatrice and GI Northwest. The Tigers are also a solid #5 in the Class B wild card standings.

*McCook Head Coach Jeff Gross - The legendary Bison head man recoded his 200th Career win in McCook’s 41-0 whitewashing of Alliance. There are rumors circulating that Coach Gross may hang it up after this season. I hope he continues to coach till he’s a hundred years old. The game of high school football need him.

*Jack Dotzler-Omaha Roncalli - Sensational senior QB directed a game winning 76 yard drive in the Crimson Pride’s 34-31 win over Elkhorn Mt. Michael. Dotzler completed 10 of 22 passes for 201 yards and three scores in the narrow victory. He also rushed for 89 yards on 15 carries and scored touchdowns of one and six yards in the nail-biting win.

*Eli Larson-St. Paul - The six foot, 210 pound junior flyer continued to appear unstoppable in the Wildcats 29-10 win over Gibbon. Larson, who rambled for 1,367 yards a year ago as a sophomore, escaped for 230 yards on 28 touches and a touchdown at Gibbon, which raised his 6 game total to 1,073 yards with 15 TDs.

The Wildcats, now 6-0 on the year, are still rated number 2 in Class C-2, with only unbeaten BRLD in front of them.

*Nick Halleen-Lincoln Southeast - Tough as nails running back sailed over the coveted 1000 yard rushing mark for the 2nd consecutive year in a row in the Knights easy 51-7 win over Bellevue East.

The powerful running Halleen, who gained 125 yards on just 7 touches in the romp, raised his 2019 rushing total to 1,078 yards with 11 touchdowns. Last season Nick Halleen blasted for 1,052 yards playing for a 5-4 Lincoln Northeast team.

Lincoln SE currently holds now the #5 spot in the OWH Class A rankings and has only Millard West ahead of them in the wild card standings.

*Tristan Gomes, Ethan Valencia, Wildcats “D”-Millard West - Both QB Gomes and RB Valencia gained 100 yards rushing in Millard West’s 23-13 victory over Kearney last Friday. Gomes ran for 108 yards on 23 carries and scored on a one yard run for the Wildcats, who spotted Kearney 13-0 lead in the opening half.

Ethan Valencia was not far off Tristan’s pace, rushing for 103 yards on 19 tries with an 8 yard touchdown run that probably iced the win with 4:42 left in the 4th quarter.

The Millard West defense was deadly after Kearney’ 13-0 lead. The ‘Cats allowed just 49 total yards for the remainder of the contest following Miko Maessner’s one yard TD run with 9:55 left in the 2nd quarter.

Kirk Peterson’s forces remain unbeaten at 6-0, and still occupy the #2 rung in the OWH Class A rankings, behind Bellevue West. The Wildcats, who will travel to Grand Island to meet the #7 Islanders this Friday, are number one in the Class A wild card standings by wide margin at the present time.

*Reece Barnes-Battle Creek - 5-8, 145 pound junior, who was not mentioned in pre season circles as a running back to watch, broke free for 209 yards on just 9 carries in surging Battle Creek’s 41-6 win over Ponca.

Barnes, who had touchdown journeys of 50 and 58 yards in the win, raised his season rushing total to 677 yards with 9 TDs.

The Braves have won five straight since an opening game 7-3 setback to Shelby/Rising City, who is currently 6-0.

*Eddie Gonzales-Minden - Flashy Whippet senior raced for 170 yards on 30 carries and scored his teams only touchdown in the 29-6 loss to Cozad last week. That elevates Eduardo’s season total to 997 yards (7 TDs)

I’m going to tell you something right now. Nobody I know deserves to be a 1000 yard rusher more than Eddie Gonzales. This hard working young man has been all-district the past two seasons for 1-8, and 4-5 football teams.

During Gonzales career (31 games), despite his Minden team going 11-22 during that span, the kid has gained 439 yards rushing as a freshman, 900 his sophomore campaign, 745 a year ago, and now, 997 yards through six games

I know one old guy who just can’t wait until this time next week to announce that Mr. Gonzales surpassed the 1000 yard rushing mark, and I’m praying I didn’t just jinx the poor guy.

Senior quarterback Trevor Dvorak scored on TD runs of 3, 1 and 5 yards, while the stingy Aurora “D” was limiting Fillmore to just 38 total yards.

The 300 yard outburst by Tristan Nicks, his second of 2019, raised his season rushing total to 1,008 yards. Falcons QB Gavin Sheen was also a force in the Wil-Hill victory, completing 12 of 20 passes for 179 yards and 4 Touchdowns.

*Ty Hahn-Johnson-Brock - Two sport All-Stater accounted for all five Eagles touchdowns in Johnson-Brock’s 46-8 win over Diller-Odell. Hahn rushed for one score, caught a pair of TD passes (11, 29 yards) from Caleb Fossenbarger, had a 60 punt return touchdown and recorded a Pick 6 in the Eagles (4-1) win.

*Dominic Darrah-Palmyra - Panther QB was a shining star in Palmyra’s 38-30 overtime win over Weeping Water. The Lincoln East transfer scored on runs of 25, 1 and 34 yards, and threw a pair of 22 yard touchdown tosses to Andrew Waltke.

You may recall that the great Andrew Waltke had 1,044 receiving yards as a Freshman a year ago for Palmyra.

*Jacob Diessner-Spalding Academy - Shamrocks QB rushed for 160 yards on 12 carries and four touchdowns in Academy’s 66-12 win over St. Edward. Diessner now has 816 rushing yards, 14 TDs and 48 tackles on defense for the 1-4 Shamrocks.

…..next up, Part Two of Friday Night Lights Football Heroes.