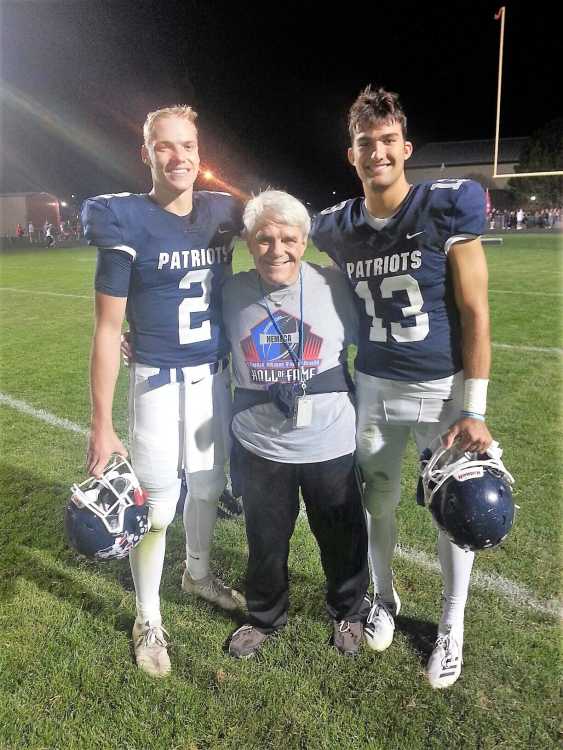 *Gabe Conant, Evan Johnson, Leif Spady, Slade Smith-Adams Central - Looks like all the cylinders were clicking for the 3rd rated Patriots (Class C1) last Friday as they dispatched the 6th rated Ord Chanticleers by a 50-27 count. Games like that are not supposed to be that lopsided, but Adams Central had a 50-13 lead heading into the 4th quarter.

Two time 1000 yard rusher Gabe Conant was just outstanding in this game, running for 157 yards on 21 carries with touchdown jaunts of 12, 5, 32 and 53 yards. The senior standout also caught 3 passes for 29 yards and made 5 stops on defense.

The lethal quarterback/wide receiver combination of field general Evan Johnson and WR Leif Spady was in full force in this baby. Johnson connected on 22 of his 32 passing attempts, good for 267 yards and pair of scoring tosses to the nearly impossible to cover, Leif Spady.

The senior wide-out ended the night with 11 receptions for 117 yards and those two touchdown catches covering 1 and 25 yards.

And then we have 5-10, 175 pound junior linebacker Slade Smith. He would be the #7 dude you see covering sideline to sideline. Slade had 14 tackles, a fumble recovery and a blocked punt against the Chants last week. The week before it was 16 stops against Gothenburg.

Here is a check of 2019 stats and career stats for the aforementioned trio of Patriot skill position players;

This Adams Central group, currently rated #3 in Class C-1, is a prime candidate to advance deep in the playoffs. The Patriots, Pierce and Wahoo are the cream of the crop right now in C-1 and it will come down to Offensive line play, defensive supremacy and depth, to determine a champion in this class.

Do not dismiss Ashland-Greenwood either, who is untested thus far and may not be for the duration of the regular season. Then there is rushing juggernaut Wahoo Neuman, who can also play some stout defense as well, and defending champion Aurora, a team nobody in their right mind could ever count out.

*Aquinas Offense/Aquinas Defense - Nothing new here. When you have “Best in the Biz” coaches like Ron Mimick directing the offense and Tony Smith handling the defense, this is a common occurance week in and week out.

In a head-turning 35-0 win over a fine, defending C-2 champion Centennial team, Mimick’s offense exploded for 419 rushing yards. Caden Kozisek ran for 137 yards on 13 carries, while Kyle Napier rushed for 64 yards on 10 totes with TD runs of 1, 27 yards.

Meanwhile, Tony Smith’s Monarch “D” squashed the Bronco offense, holding the defending champs to just 8 first downs and 171 total yards in the game. The second half was especially brutal for the Centennial running game. The Broncos could only rush the football 7 times for a minus 32 yards.

Aquinas Catholic is currently ranked 3rd in Class C-1 with only #1 BRLD and St. Paul ahead of the Monarchs.

*Nick Halleen-Lincoln Southeast - I never really find it necessary to use the phrase “I told you so” but I’ve been preaching and teaching about Nick Halleen for well over a year now. I know a football player when I see one, and it rarely takes me four quarters for me to make that determination. There aren’t many things I do well, but knowing the game of high school football is definitely one of my few strongpoints.

In five games, the 1000 yard rusher from a year ago (Lincoln NE) has rambled for 953 yards on 135 carries (7.1/per) and 9 touchdowns. Nick Halleen will reach the 1000 rushing plateau next time out against Bellevue East and the 5th rated Knights will continue to play well and make some noise in the Class A post season.

Honestly, Nick Halleen is the kind of football player you bend over backwards to find a spot on your All-State team if necessary.

Love the way you play the game Mr. Halleen. Stay healthy my friend.

*Bryce Kitrell, Julian Brown-Ashland-Greenwood - Auburn probably will not care to see these two gentlemen again very soon. In Ashland-Greenwood’s 45-0 win over the Bulldogs, the speedy Bryce Kitrell exploded for 183 yards on just 14 carries with touchdown journeys of 45, 36 and 60 yards. I’ve been waiting for Kitrell to pull one of these games out since August.

And then you have Julian Brown, the 5-11, 185 pound junior, who was just making his 3rd appearance in the Bluejays backfield. Prior to this, Brown had 5 carries for 18 yards, but did score a TD against Fairbury. The next outing against Boys Town, he gained 49 yards on 8 totes and scored again.

This time around versus Auburn, Julian decided to make some noise. The dude only was given the ball 7 times, but raced for 176 yards with long touchdown runs covering 83 and 45 yards.

*Mason Nieman, Viking “D” and “THEE DRIVE”-Waverly - Coach Reed Manstedt’s fine, #3 rated Waverly football team dug in deep when they needed to in a 21-14 win over a Norris team they knew would be tough.

Mason Nieman rushed for 161 yards on 20 carries, but no yards were more important than the 50 big ones he gained on just five carries during the Vikings final 88 yard/11 play drive that salted away the win.

On the other side of the ball, the stifling Waverly defense went to work in the second half, limiting a fine Norris offense to just 16 yards rushing and 29 passing in the critical 3rd and 4th quarters.

Against the Eagles, the 5-11, 195 pound Keaschall lanched 47 passes into the air, completing 28 for 366 yards and three touchdowns. The senior QB also scored on a pair of one yard touchdown runs in the loss.

Unofficially, Jakson Keaschall has competed 68% of his 145 passing attempts for 1,349 yards, 15 TDs with just one INT.

Despite the loss, the Bulldogs are still rated #10 in Class D-2 and sixth overall in the wild card standings, remaining ahead of Overton.

*Heinrich Haarberg-Kearney Catholic - 6-6, 175 pound junior quarterback hit 19 of 27 passes for 280 yards and three touchdowns in the Stars hard fought 31-22 win over pesky Minden. That makes three straight for Kearney Catholic, who holds down that #9 spot in the Class C-1 ratings.

Something about Heinrich Haarberg that some of us forget, or simply do not know is that the dude was 7th in both the Class C 100 and 200 meters at the State Track Meet in May when he was a sophomore. The big 6-6 Kearney Catholic quarterback can flat out fly, man.

*Lance Paprocki, Eli Hayes-Clarkson-Leigh - Players keep surfacing to fill the painful void left by the Patriots All-State running back star, Tommy McEvoy. This time it was 5-7, 140 junior quarterback Lance Paprocki, who literally flew past the Pender defense for 172 yards on just 10 touches.

McCool Junction, a Six-Man power, is currently 5-0, and ranked #2 behind Harvard. And no, the two will not meet in the regular season despite being only 39 miles apart. We’ll just have to wait for the post season to see those two tangle.

*Drake Spohr-Elmwood-Murdock - One of the absolute roughest, toughest Eight Man football players in Nebraska, Drake Spohr put on another clinic to verify that fact in Elmwood-Murdock’s 58-22 win over Nebraska City Lourdes. The Knights senior rambled for 306 yards on just 18 carries and scored six touchdowns. Drake’s scoring jaunts came from 3, 47, 46, 3, 6 and 47 yards away.

Spohr also had 12 tackles and a fumble recovery in the game. The pure football man has 813 yards this season on just 73 carries and 14 touchdowns. Big Time Baller.

In that 67-20 Heartland Lutheran victory over Hampton, Justis Bader completed 9 of 14 passes for 201 yards and 4 TDs, rushed 9 times for 151 yards and three more touchdowns, made a couple of tackles on defense, and intercepted two Hawks passes.

As of last week, according to MaxPreps, Justis Bader is ranked 2nd in the entire 6-Man football nation in passing and 4th in total yards. Teammate Quinston Larsen is 2nd nationally in scoring and 2nd in Total Touchdowns.

Pretty talented duo out there at Heartland Lutheran and they will get their wish and face #1 Harvard this Friday afternoon in Harvard with kickoff time set for 3:00. The Red Hornets are currently ranked #7 in the Nebraska Six-Man ratings.