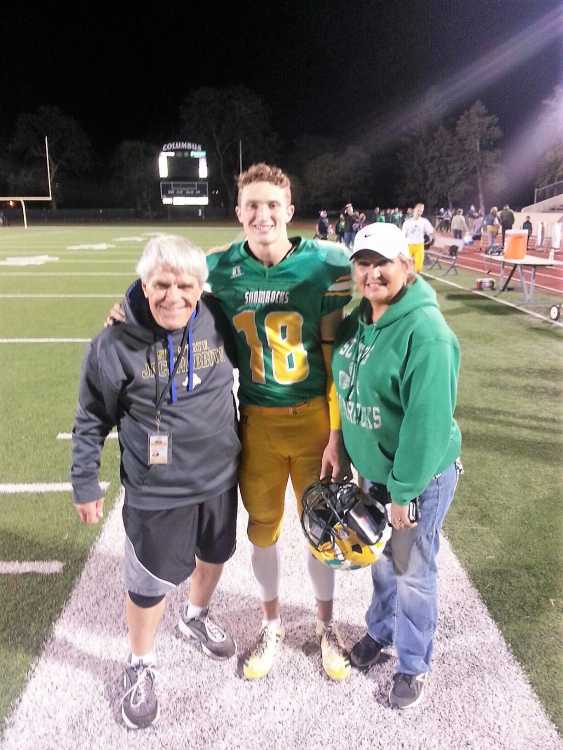 Columbus Scotus star QB Tyler Palmer (Center) and his lovely Mother. Every football photo should include a Football Mom!

*Tyler Palmer, Eric Mustard, Dalton Borchers-Columbus Scotus - Saw these men play two games in six days live, so I have a pretty good idea about their talent levels. All three get an “A” rating from my end, especially QB/Athlete Tyler Palmer.

In the 35-14 win over Raymond Central last Thursday, the duel-threat Palmer was deadly with his passing game, completing 7 of 9 for 138 yards with an 8 yard touchdown pass to Luke Przymus. The Shamrock Flyer also ran 9 times for 89 yards and scored touchdowns from 6 and 15 yards out.

The Scotus QB carried the football only once in the second half as the ‘Rocks built a 35-0 lead with 9:09 left in the 3rd quarter.

Quick starting Eric Mustard was the rushing leader for Scotus, running for 94 yards on just 7 touches and a 41 yard TD scamper. Dalton Borchers, a real quality football player at 6-1, 180 pounds, carried the pig only four times in the win, but gained 36 yards and hit paydirt from 9 yards away in the 2nd quarter.

I’m not sure anyone has a more brutal district in C-1 than Scotus, with Wahoo, Bishop Neumann and cross town rival Columbus Lakeview remaining on their schedule as far as district play is concerned. And remember, these boys have already played Aquinas and Pierce in their out of District schedule.

I would love to see this group get to the playoffs to see how deep they can roll..

*Cole Payton, Harrell Bodie-Omaha Westside - If I was a head coach in Class A, Omaha Westside might concerning me a whole bunch right now, especially QB Cole Payton. If you were under the impression that this guy could just pile those passing yards, think again.

In Westside’s 49-31 win over Creighton Prep, the 6-1, 200 pound junior did complete 14 of 22 passes for 162 yards and a touchdown, but on this night, Payton decided to keep the ball and play duel-threat quarterback, and Creighton Prep did not enjoy the results.

The Warrior field general toted the ball only 15 times all night, but managed to dent the Junior Jays defense for 173 yards and five touchdowns. Payton ran for TDs covering 2, 72 and 11 yards in the 2nd quarter alone. He also connected with Koby Bretz for a damaging 17 yard scoring pass with just 12 seconds left in the half. That put Westside up 28-14 at the time.

Cole put the game out of reach (42-14) with a pair of rushing touchdowns in the third quarter (1, 2 yards) that occurred within 1:37 of each other. Harrell Bodie, who rushed for 140 yards on 20 carries in this contest, also hit the end zone on a 25 yard run.

I must be slipping or something because this Harrell Bodie dude got by me for some reason. It’s not like the kid popped up out of nowhere. He has 60 carries for 363 yards in just four games. He certainly makes Westside even more dangerous.

*Dex Larsen, Jason Stewart, Nolan Osterhaus, Jakob Meggison, Livai Opetaia-Blair - These fellas, plus others, ganged up on South Sioux City for a 57-21 victory the other night.

Dex Larsen, “The Human Snowplow with Speed” put ‘er in high gear to display some other talents against the Cardinals. Of course he rushed 28 times for 228 yards with a 61 yard touchdown run around the right side. He also rolled right, appearing to duplicate the 61 TD run, but instead pulled up to toss a 35 yards scoring pass to Braden Hanson. Remember, Larsen is just a junior.

QB Jason Stewart was nearly perfect in the passing department, hitting 6 of 7 aerials for 81 yards and three TDs. Stewart’s touchdown passes were caught by Jacob Chavez (21 yards), Colin Quick (33 yards) and Gavin Acker (13 yards), all during the 2nd quarter.

Junior Nolan Osterhaus answered a South Sioux City touchdown with an electrifying 90 yard kick return that had to be seen to be appreciated.

The incredible journey saw Osterhaus field the kickoff on the Blair side of the field, then take off across the entire width of the football surface to his left, start jetting down the SSC sideline, break several tackles and end up cutting all the way across the grain for a touchdown angling toward the right side of the end zone. That’s a 90 yard straight line from where Nolan fielded the ball in the first place with one heck of a detour route to reach his paydirt destination.

Livai Opetaia? Well, all he did was rush the ball 9 times for 109 yards and a sweet 60 TD run. And finally, senior Jakob Meggison apparently thought he should get in the scoring act, so he pirated a South Sioux pass in the 4th quarter and got himself a nifty 66 yard Pick 6.

*Deanthony Bridgeford-Omaha Central - 5-8, 180 pound senior RB rushed 14 times for 134 yards and a touchdown in the Eagles 17-7 conquest of Lincoln High.

Notre Dame commit Xavier Watts caught both of Reid’s TD passes and reeled in 9 receptions for 154 yards in the win. Watts now has 34 catches for 599 yards and 6 TDs, but is also a force on defense for the Bulldogs, making 27 tackles (21 solos) and picking off a pass.

Xavier Watts is in rare air in Metro football circles as far as playing both ways in games is concerned. Awful tough to do and have any gas left when the money quarter rolls around, but this lad is really special.

Jaylon Rousselle gained 121 yards on 17 totes and that included a 12 yard TD dash. Tyreece Wynn completed the scoring for Omaha Burke with his 28 yard touchdown sprint.

Defending Class A champion Omaha Burke is currently rated #4 in Top 10/Class A ratings. Bellevue West, Millard West and Millard South remain ahead of the Bulldogs in this weeks rankings.

*Mason Combs-Wilber-Clatonia - Talk about making the most of your carries. The 6-2, 175 pound Wilber-Clatonia sophomore carried the football three times in a 49-0 win over Freeman, rushed for 143 yards, and scored TDs covering 39 and 85 yards.

Tad Moldenhaur returned a Freeman punt 55 yards for a score and added touchdown runs of 7 and 65 yards in the route.

In the Bluejays 42-0 victory over the Blue Devils, Brett Tinker rushed for 111 yards on just 12 carries and scored a TD every 3rd time he touched the football. The rugged Pierce FB/LB hit paydirt from 1, 6, 1 and 71 yards out.

Sophomore Ritter Oestreich not only pirated a Wayne pass in the game, but blocked a punt as well. Meanwhile, freshman QB Abram Scholting had to thrilled because he fired a 23 yard touchdown pass to senior Jake Edins.

*Jacob Stoner, Koby Head-Fillmore Central - Pretty significant night for junior duel-threat quarterback Jacob Stoner. In the Panthers 18-13 win over Sandy Creek, the 5-10, 185 pound tough guy rushed 22 times for 203 yards and a pair of scores, completed 6 of 14 passes for 91 yards and a TD, and led the defense with 13 tackles with 4 behind the scrimmage line.

Junior classmate Koby Head, who could play any one of the skill positions on Fillmore’s team, ran the ball only three times but gained 61 yards, which included a 41 yard run. Koby also made 10 tackles in the contest and that included six solo stops with one TFL.

Is this the year that Jacob Stoner gets his 1000 yard rushing season? Hey, the tough as nails baller even ran for 740 yards as a freshman (7 TDs). Last season as a sophomore, Stoner increased that number to 754 yards (6 TDs) and he already has rushed for 706 yards and 7 touchdowns with at least four games remaining on the Fillmore Central schedule.

How rugged is this guy? Stoner has already toted the football 407 times in his 22 games at Fillmore for an even-steven 2,200 yards. And it’s not like the dude is catching his breath while the Panthers are on defense. No sir.

I say Renaissance Man would aptly describe Cole Siems. Check this out. The guy has hit 25 of 39 passes for 456 yards with 9 TDs and only one INT. He’s also rushed for 333 yards and 9 touchdowns with 789 total yards accumulated that I know of.

Now, I’m missing his defensive and special team stats for the HTRS game, but I do know Mr. Siems has 22 tackles and an interception on defense, has kicked off four times with 3 going for touchbacks, punted one time, returned 7 punts for 110 yards, made one of two PAT kicks, rushed for three double PATs and taught the entire Tri-County football team how weld anything that is broken and also how to fly a drone.

Actually those last two stats may be a little shaky, but the fact that Tri-County is currently 4-1 in Class D-1 is a true statement.

*David Lilly, Taylen Pospisil-Bishop Neumann - Lilly ran 15 times for 116 yards and three touchdowns (32, 1, 25 yards) in the Cavaliers huge 28-21 district win over a very good Columbus Lakeview team. The rugged Lilly also had a monster sixteen tackles on defense and is a definite big time All-State candidate on that side of the ball.

Quarterback Taylen Pospisil however, led Neumann on the ground with his 134 yards on 23 carries.

At last check, Wahoo Neumann led the Class C-1 pack in the Rushing Yardage category. David Lilly has more than half of those yards with his 623 big ones and 15 touchdowns to go with it.

Denkert also completed 2 of his 3 pass attempts for 45 yards, made 6 tackles on defense and recovered a Wildcat fumble.

On defense, Denkert has been in on 36 tackles (21 solos) and had a pair of interceptions. The sophomore is also a dangerous return man for the Blue Devils.