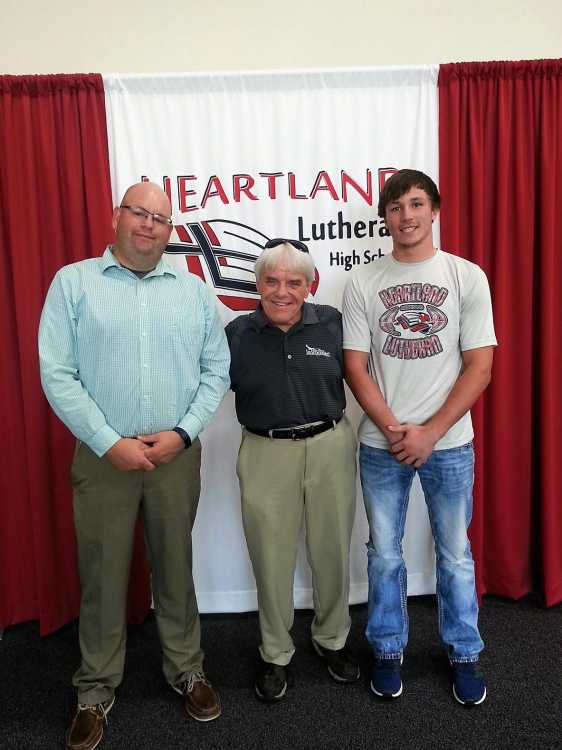 Grand Island Heartland Lutheran is off to a 2-0 start and #10 rating in 2019. Pictured here are Head Coach Tim Leetch (L) and Red Cloud transfer Quinston Larson (R), a 1000 yard rusher in 2018 and a big time receiving threat as well. Not picture here is All-State QB candidate, Justis Bader.

*Justis Bader, Quinston Larson - Grand Island Heartland Lutheran - This lethal 6-Man football pass/catch combination has the Red Hornets off to a 2-0 start and the school’s first ever ratings appearance in the Omaha World-Herald football ratings (#10).

In Heartland Lutheran’s delayed season opener (Sept. 6th), junior QB Justis Bader hooked with new junior classmate Quinston Larson 17 times for 218 yards and three TDs in their last minute 66-63 win over Spalding Academy. The 17 receptions by Larson was an apparent Six Man state record, eclipsing the previous mark of 12 receptions set by Wolbach’s Lloyd Hartman in a game against Palmer back in 1943.

Last Friday afternoon, the Red Hornets dispatched SEM 42-12 and head coach Tim Leetch broke up the record setting duo for a bit to take advantage of his recent transfer from Red Cloud’s running ability. Leetch decided to cut Quinston loose for a few more rushing attempts and Larson responded with 172 yards on 14 carries and 3 TDs.

Oh don’t worry, Larson cracked the 100 yard mark in receiving yards too, hitting the mark exactly with just four catches and a TD included in there

Justis Bader felt like he needed to get in on the ground game fun, so he ran for 120 yards on just 8 totes and a score. That went well with his 14 of 25 passing for 207 yards/3 touchdowns stat line.

If you followed 6-Man football a year ago, you will recognize the name Quinston Larson. The 6-1, 190 pound sophomore rushed for 1,135 yards for the Red Cloud Warriors a year ago. Now the former Red Cloud player is back near his old stomping grounds (Worms, Ne) for his junior campaign.

Heartland Lutheran, the high school just down the highway west of Stuhr Museum, is setting its sights on a Six-Man playoff berth this season, which would be a first for the Class D-2 school that begin it’s football journey playing the 8-Man game.

And with key figures like Justis Bader (576 passing, 236 rushing in 2 games) and Quinston Larson (224 rushing, 328 receiving in 2 games), the Red Hornets have a legitimate shot at not only making the playoffs, but making some noise once they get there.

Gabe Conant - Adams Central - Scored every 5th time he rushed the football in the Patriots 42-0 win over Lincoln Lutheran. The two-time 1000 yard rusher carried 19 times for 99 yards and hit the end zone from 2, 2 ,7 and 9 yards out and added a 51 yard receiving touchdown, courtesy of QB Evan Johnson.

Johnson was quietly efficient with his 7-10 passes for 180 yards and that TD toss to Conant. Cam Foster, son of Adams Central head basketball coach Zac Foster, had the other score when he picked off a Lincoln Lutheran aerial and returned it for a Pick-Six.

Young also scored on a 9 yard run and yes, Drew Christo is the son of former Husker QB, Monte Christo.

*Austin Endorf-North Bend Central - Tiger sharpshooter was money in North Bend’s 48-28 win over Stanton. The All-State candidate completed 16 of 19 passes for 254 yards and 4 touchdowns, rushed 9 times for an additional 48 big ones and recorded 5 stops on defense.

Breckin Peters caught 3 of Austin’s 4 TD tosses and recorded 7 catches or 133 yards in the game.The remaining scoring pass fell into the hands of junior Austin Taylor.

Endorf is just 213 yards away from being a member of the prestigious 5000 Yard Career Passing Yards Club and will face a stiff challenge this week when his 3-0 Tigers entertain an undefeated GICC squad.

*Will Gatzemeyer-BRLD - Good Lord! In BRLD’s 58-22 thrashing of Crofton, this may be one of those “did he even drive the bus” type of game descriptions for Mr. Gatzemeyer.

In three games, the All-State Gatzemeyer has been true on 28 of his 47 passes for 585 yards and 8 TDs with no interceptions. He’s also rushed the football 36 times for 451 yards (12.5 per pop) and 3 TDs, compiled 1,036 offensive yards, made 23 stops on defense and intercepted 4 passes, one against Cedar Catholic, two versus Ponca and the one last Friday against Crofton.

This week super head coach Dan Maresh, the only coach this 4 year co-op has ever known, sends his troops to Norfolk to take on Norfolk Catholic. I don’t think BRLD needs to be reminded they were rolling along undefeated a year ago when Catholic came to town and later departed with a 49-14 victory.

*Clayton Denker-David City Public - Three cheers for the Scouts, who have started the 2019 season with a 3-0 slate. One of the main reasons for David City’s success is the excellent, consistent play of 6-0, 175 pound Clayton Denker.

The senior had another hundred yard rushing game in the Scouts 41-20 victory over Conestoga. Denker scooted for 166 yards on 19 touches and 3 scores against the Cougars.

*Chesney Stanczyk, Austin Dormann, Reid Spady-Garden County - Stanczyk probably needed an ice bath after his performance in the Eagles wild 60-52 triumph over Mullen last Friday. The 6-0, 175 pound junior toted the ball 43 times and went off for 287 yards with rushing touchdowns of 5 and 26 yards.

Chesney also caught a 36 yard TD pass from Austin Dormann, plus leading Garden in tackles with 15. Dormann, who quarterbacks the Eagles and has for the past four seasons, hit 7 of 8 passes for 199 yards and 4 touchowns and rushed 20 times for 41 yards and a 2 yard scoring blast.

Austin’s remaining three scoring strikes were caught by Reid Spady, covering 31, 24 a 8 yards. Spady, another 4 year starter and son of Garden County super coach Jason Spady (144-43 career record), had four catches for 103 yards, picked up a Mullen fumble and returned it 20 yards for a touchdown and posted ten tackles defensively.

Jarzynka, the two-time All-District quarterback, hit 10 of 18 passes for 174 yards and 2 TDs, while backfield buddy Drew Bolling was adding 135 ground yards on 15 carries and a sparkling 66 yard touchdown scamper.

Jake Jarzynka’s TD passes were hauled in by Jack Drahota (44 yards) and Trey Meith (65 yards). Jarzynka also rushed 16 times for 53 yards and had touchdown runs of 9 and 22 yards, the latter proving to be the winning score for Ravenna, who is now 2-1 on the season.

Jake Jarzynka has thrown for 2,922 yards with 41 touchdowns thus far in his career with a pair of 1000 yard passing seasons already under his belt.

*Keithen Stafford-Doniphan-Trumbull - Senior RB, who ran for a thousand yards a year ago, broke loose for 184 yards on just 13 carries, plus 3 touchdowns and 9 tackles on defense, in the Cardinals 60-14 thumping of Hershey.

Stafford has 471 yards thus far on just 38 touches (12/per rush) and six TDs for the high flying Cardinals, who are averaging 63 points a game, but are yet to be ranked in a strong Class C-2 field yet.

Flashy sophomore Brett Mahoney, the basketball wizard, caught 3 passes for 67 yards. Two of Brett’s three receptions went for touchdowns. Mahoney also made 16 stops on defense and recorded an interception in the win.

The Stars defense was led by senior Matthew Mertz, who made 17 tackles and picked off a Christian pass. Sophomore Jaden Seier made 10 tackles in the win, 9 of which were solos.

*Jacob Stoner, Brock Tatro, Koby Head-Fillmore Central - Stoner notched his second straight 100 yards plus rushing game with his 150 yards on 34 carries and a pair of scoring runs in the Panthers 18-13 win over Sandy Creek. That puts Fillmore Central at 2-1 for the season.

Brock Tatro and Koby Head once again paced the Fillmore defense with 12 and 9 tackles respectively. Koby also had a sack in the win, while both Brock and Carson Tatro picked off Cougar passes.

*Eli Wooden-Centura - All-Around athlete came up huge in Centura’s 34-27 win over Superior. Wooden, the 5-9, 155 pound All-District junior, rushed 9 times for 79 yards and a touchdown, caught 7 passes for 158 yards and three more scores, made 9 tackles, caused and recovered a fumble, and block a punt in the game.

*Josiah Spencer-South Platte (Big Springs/Brule) - 6-0, 160 pound senior QB/OLB was a force to be reckoned with in South Platte’s 91-40 Six-Man win over Hay Springs.