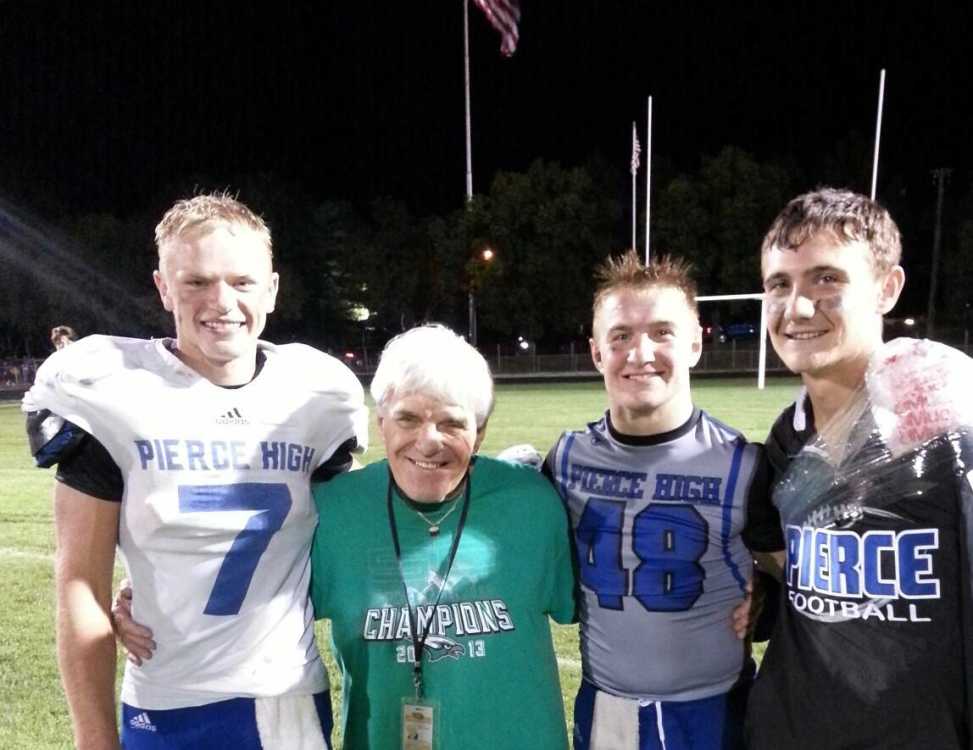 I’ll admit that I’ve had fears about Pierce losing one of the Three Horsemen. The Bluejays became only the second team in 11-Man football history to have three backs rush for over a thousand yards in one season. Quarterback Dalton Freeman, utility back Carson Oestreich and rugged fullback Brett Tinker all were part of that history a year ago, cracking the 1000 yard plateau as juniors.

Tonight in Ord, it happened. The very first play of the game, Bluejays QB Dalton Freeman was jerked backwards on a freak tackle at the end of a 34 yard run. Freeman eventually walked off the field, was taken to the hospital for observation and did not return to the field of play for the remainder of the game.

Now what? Just consider this. The Pierce head coach Mark Brahmer is one of the greats, and this man always has a Plan B…….and Plan C and D and E and F…..

Four hundred ninety yards on the ground sounds dominating. That is a ton of yards, especially against a quality team like Ord but this win, which was costly, did not come easy.

Pierce went on to score on that opening drive, with 185 pound junior David Dale doing the honors with a 6 yard sweep around his right side. The Chants rushed in to block the PAT kick and it was 6-0 Bluejays, and remained that way the rest of the first half.

What transpired the during the remaining 21 minutes,42 seconds of the 1st half was a combination of brutal defense by both teams and the Piece offense searching for a rhythm with Oestreich at the controls.

Ord was held to 124 yards (105 passing) in that opening half, while hard pounding FB Brett Tinker kept the Pierce ground game rolling with 98 yards on 11 carries, including a 49 yard run.

But that brutal Ord defense would not break, limiting Oestreich to 43 yards rushing and some physical hits on the 185 pound senior. Speedy senior Jeremiah Kruntorad, all 150 pounds of him, even slipped into the game and advanced the ball from the Pierce 17 yard line all the way to the Ord 17 before being run down from behind.

A sixty-six yard run by Kruntorad and still no points.

I’m not sure what Coach Brahmer said at halftime, but it must have been effective, especially to the Bluejay offensive line(s). You have to insert that plural after the word “lines” because Brahmer will substitute an entire offensive line on several occasions during the course of a football game, ala Mark Wortman back in the Elkhorn Antler, Class A glory days.

At any rate, it took only three plays into the 3rd quarter before Carson Oestreich charged through an opening in the angry Chanticleer line, broke several tackles, and was off on a sparkling 55 yard touchdown gallop.

Oestreich then found good looking freshman Ben Brahmer (it is Mark’s son),for the two point conversion pass. 9:52 left in the 3rd quarter, it was Bluejays 14-0.

The Pierce defense continued to shut off the Ord running game and limit the aerial damage for the next 5:10 of the 3rd stanza. Then it was Brett Tinker’s turn to take advantage of another nice hole provided by the Pierce O-Line.

The speedy Tinker slipped through a crease faster than a sneeze through a screen door, bolting 42 yards for the score. Chaden Roth booted the PAT though and it was 21-0 Pierce.

I certainly wasn’t the only one in attendance that figured Ord would eventually get QB Zach Smith cranked up. The 175 pound junior has done a remarkable job stepping into the shoes of graduated Chanticleer superstar Jess Ulrich.

It had to happen quick, and in exactly 1:59 seconds Mr. Smith banged in from a yard out to cut the Pierce lead to 21-7. Smith set up his own touchdown by pulling off a Tommy Frazier type 33 yard dash from the Bluejay 34 yard line to the one.

Zach appeared to stopped not once, but three times during the spectacular play, only to squirt out the other side of the the mass of humanity and keep going.

Another scary thing for Pierce was Smith and his ability to hook up with 165 pound, senior wide receiver Riley Warner. The pass/catch combination worked for a 47 yarder in the third quarter and there was more to come.

The Chants who were stiffening up defensively, rode the Zach Smith to Riley Werner for gains of 29 and 33 yards to begin the 4th quarter. The end result was a Zach Smith sweet “rush up to take the snap from under center” play, one yard touchdown run by the agile Chanticleer signal caller.

Kelen Meyer converted the PAT kick and we had a new ballgame with 9:12 left in the Money quarter. Scoreboard read: Pierce 21-14 Ord.

Pierce had to answer, and there could be no delay.

What took place next was a “punch in the gut”, 11 play, 6:12 killer drive by the Bluejays that featured Carson Oestreich, Brett Tinker and the Pierce offensive line at their best.

The Bluejays, who took to the air only eight times all night, ground it out and made things very difficult for Ord when Oestreich scored on a one yard run with 2:48 left in the contest.

Pierce could have salted the game away on the next four Ord plays, but the Bluejays were slapped with an unsportsman like conduct foul on a fourth down sack of Ord QB Zach Smith.

The Chants gained a 1st down by penalty, but on the very next play Smith, who may have been croggy from the hit, suffered an interception when his pass picked off by Pierce junior LB, Garret Meier.

Bluejay QB Carson Oestreich took a knee three times following the Meier pick, and the game was over.

Pierce ended the night rushing for a mind-boggling (unofficial) 490 yards in absence of All-Stater, Dalton Freeman after his opening pair of carries. Brett Tinker led the way with 225 yards on 25 carries and a touchdown.

Oestreich, after being held to 43 first half yards, shook loose for 117 in the 2nd half to total 160 yards on 21 totes. Jeremiah Kruntorad exploded for 84 yards on just 4 touches, Freeman had his 2 carries for 34 big ones, David Dale added 20 yards and a TD on 5 carries and Dean Orwig chipped 7 yards on a pair of rushes.

Smith was also the leading ground gainer for the Chants with 53 yards on 13 attempts. Tough running junior Tommy Stevens was held to 32 yards on 16 carries.

As has been the case on defense the first two contests, the Chants defense was led by Smith and Stevens, who tallied 11 tackles apiece.

As for Dalton Freeman’s injury, this is only speculation and an uneducated guess, but it appeared he may have suffered an A/C joint injury, or coracoclavicular type injury. Not certain, but the A/C may be the ligament is what connects the shoulder to the collarbone?

Pierce will head to Columbus to take on Columbus Scotus next Friday, a team that has developed into a Bluejay rival of sorts in recent years.

The Chanticleers? Don’t loose any sleep on this bunch. They’ll be just fine and will be a factor in the C-1 playoff picture at the end of the 2019 season.

Yes, head coach Nate Wells, assistants Carl Streeter, Nick Gates, Tyke Kozeal and Johnny Ference know the formula for success and will be there when it counts in the post season.