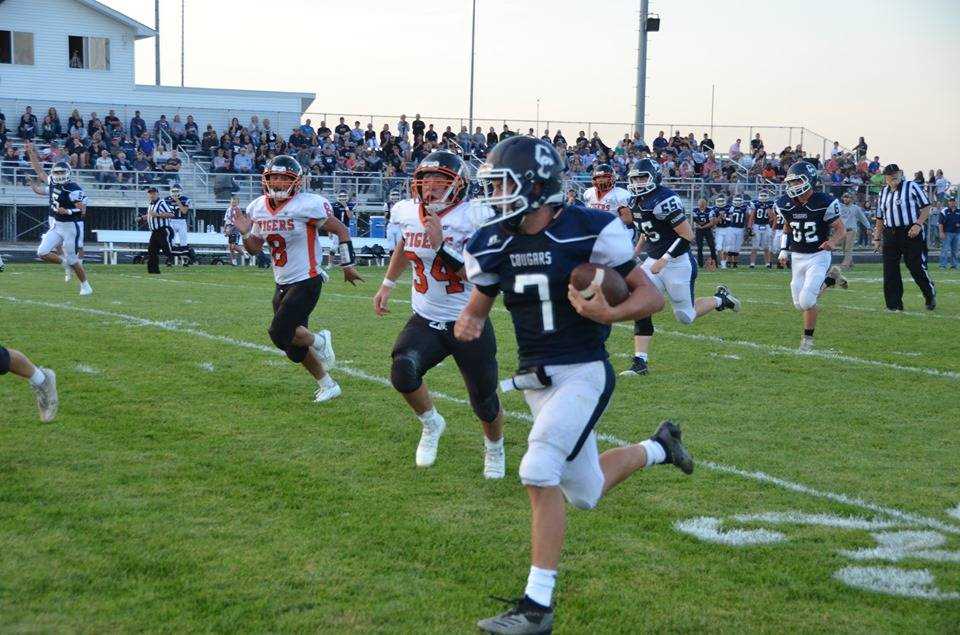 Cross County junior RB Isaac Noyd (#27/Blue jersey) is on his way to one of his eight touchdown runs in the Cougars 78-28 win over Palmer last Friday. *(photo courtesy of Ross Berck)

*Isaac Noyd-Cross County - To say that 5-8, 145 Cross County junior Isaac Noyd (#7) had a “career night” against Palmer last Friday, might be an understatement. In the Cougars 78-28 win over Palmer, Isaac escaped for 359 yards on 20 carries and 8 TDs. That’s Eight touchdowns.

Cross County has a week off because of a BYE, but on September 20th the Cougars travel North to face a tough Fullerton squad. So, if Isaac Noyd can find a way to navigate that stout Warrior defense, we have ourselves a really special player here.

*Broc Douglass, Carson Cahoy, Gavin Aken-Grand Island - The Islanders All-State man Broc Douglass was at it again in GI’s 47-7 win over Lincoln High. The guy that can make himself appear invisible to would-be tacklers, racked up 162 all-purpose yards against the Links, which honestly seems like a normal night’s work for Douglass.

Included in those 162 all-purpose yards were 4 receptions for 101 yards and a 62 yard punt return to the house. Two of Broc’s pass receptions from Carson Cahoy were good for touchdowns covering 9 and 81 yards.

Speaking of Carson Cahoy, the son of 1980 United States Olympic Gymnast, Phil Cahoy, completed 11 of 14 passes for 168 yards and the two TDs to Broc Douglass. The 81 yard scoring strike was a thing of beauty, as Cahoy took the snap in the Shotgun, planted his feet and sailed the football 53 yards in the air right into the bread basket of a streaking Broc Douglass. The speedy All-Stater never broke stride and pulling away with each stride he took.

The Islanders were not without a ground attack either as Gavin Aken (#27) picked up a cool 91 yards on 16 carries, scored on runs of 7 and 4 yards, and caught two passes for 12 yards. The 5-10, 150 pound senior also returned four kick-offs for another 85 yards.

Jordan Hofeldt led GI on the defensive side with 7 tackles. Alex Hinken made 5 stops and picked off a pair of Links passes.

A week ago in a 42-14 win over Boys Town, David Lilly rushed for 114 yards on 16 totes and returned a kick-off 87 yards for another TD. And hey, we haven’t even arrived at the good stuff yet.

David Lilly’s real expertise lies on Neumann’s defensive side of the ball. Last season, the 6-0, 184 pound wrecking ball recorded a massive 144 tackles, made 13.5 TFL, had an interception and blocked a punt. Should have been named to an All-State team, but the linebacker pool was too crowded in C-1.

This lad is a sure-fire pick for All-State Class C-1 linebacker this season if he keeps on keepin’ on, already recording 11 stops against Boys Town and 7 in the Lincoln Lutheran victory.

*Jacob Stoner, Koby Head, Brock Tatro-Fillmore Central - Jake Stoner (5-10, 185, Jr) is probably someone Holdrege will not want to see in a while but the dude has another year of football left at Fillmore Central after this one. Ditto for my buddy Koby Head.

In the Panthers 28-21 conquering of Holdrege, Stoner was money. The junior QB ran the ball 30 times for 247 yards and three touchdowns, completed 10 of 22 passes for 145 yards and a 27 yard scoring toss to Demetrio Maciel. Jake the Snake also had six tackles on defense.

Koby Head, son of former Geneva RB legend Casey Head, made 11 tackles on that Fillmore defense. Senior Brock Tatro led the way with 12 stops and had an interception,as did Maciel. Another junior Thomas Barnes, recovered a Duster fumble in the win.

*Davon Brees-Centennial - Seward transfer had a field day against Malcolm last Friday. The senior speedster started the festivities by returning the opening kickoff 85 yards for a touchdown, then later added booming TD runs of 80 and 98 yards.

After Brees was finally finished, he ended up with 176 yards on just 11 carries.

*Jed Christensen-Platteview - Ran for 130 yards on 25 carries and an 18 yard touchdown in a 28-7 loss to Ashland-Greenwood. The 205 pound Christensen now has 372 rushing yards in just two games.

*Kaleb Moural, Trevor Dvorak-Aurora - It took exactly one week for the defending State C-1 champions to get untracked, and that’s incredible after losing a QB like Baylor Scheierman and pass catchers the likes of 1000 yard receivers Cy Bullerman and Cade Reichardt.

In the Huskies 45-10 win over Kearney Catholic, Moural ran for 106 yards on 18 carries and scored touchdowns covering 1, 24 and 4 yards. Quarterback Trevor Dvorak got the hang of it by connecting on 9 of 12 passes for a cool 166 yards and a 30 yard TD toss to Jamson Herzberg. Dvorak also rushed for 52 yards on just 7 tries and tacked on scoring runs of 3 and 39 yards.

Fasten the seatbelts this Friday for the Aurora at Wahoo Class C-1 classic.

*Austin Endorf, Ethan Mullally-North Bend Central - Logan View/Scribner-Snyder was hit by land and by air in North Bend’s 34-6 win. QB Austin Endorf completed 21-27 passes for 205 yards and 2 TDs, while running back Ethan Mullally punished the Raiders with his 152 yards on 16 carries and two more scores.

*Jake Ridder-Archbishop Bergan - Talking about punishing a team through the air, Fremont Bergan senior Jake Ridder did just that to Crofton last week in the Knights 31-14 victory. The crafty senior hit 18 of his 25 aerials for 255 yards and three scores in that one. Just a week before, Ridder threw for 142 yards versus Logan View/SS.

Keithen Stafford was also huge in the Centura game, running 9 times for 153 yards and a 46 yard TD run. The week prior on Aurora’s artificial turf, Stafford laid a 134 yard, two touchdown night on Wood River.

*Nick Bohn-Bennington - I hope this guy ices that right throwing arm down after Friday night action. After completing 44 of 66 passes for 407 yards and 4 TDs (2 INTs) against Omaha Skutt (49-28 loss), Nick “Air Raid” Bohn was right back at it when the Badgers played Waverly.

The senior missile launcher spiraled the ball skyward 67 times, completing 39 of ‘em for 377 yards and 3 touchdowns (2 INTs). Waverly won the game 34-20, but “Air Raid” Bohn hit eight different receivers in the loss to the Vikings (9 vs Skutt), so the dude is distributing the ball well as one would suspect when you send sixty plus passes into the night air.

Nick wears a white sleeve on his throwing arm, so I’m not sure if it’s a compression sleeve or what, but his arm isn’t the only appendage that needs icing after the game. Bohn took some vicious hits after releasing the football against that man-eating pass rush unleashed by those Skutt SkyHawks. One can only imagine how intense that rush was after Matt Turman got after them in practice the following week.

At any rate, 0-2 or not, you have to have a deep respect for high school QB that puts up 133 aerials in two games, completes 83 of them for 784 yards, and still maintains a 62% completion rate whilst running for his life on more than a few occasions.

But, you do have to give credit to that Bennington O-Line because overall they have to be doing a nice job if their quarterback is getting time to complete 62% of his sixty some throws an outing.

Nick “Air Raid” Bohn cuts down those interceptions and you’re really going to see some eye opening numbers going forward. And hopefully some wins. He and the Badgers deserve it.

*Braden Benes-Boone Central/Newman Grove - Cardinals sophomore quarterback completed 23 of 33 throws for 167 yards and a pair of scores, and ran 12 times for 102 big ones and another touchdown in a 37-20 loss to powerful Ord. This young man already has already completed 34 of 49 passes (69%) for 312 yards and three scores and Boone has yet to hit the win column.

*Noah Okraska, David Raezola-Harvard - Six Man quarterback connected on 8 of 10 passes for 189 yards and 3 touchdowns in Harvard’s 62-13 win over SEM. Last week Okraska threw only 8 times, but piled up 143 yards against Spalding Academy.

And don’t forget about our man David Raezola, who already has 233 yards rushing and 8 TDs, and six pass receptions for 94 yards and a score.

*Justus Bader, Quinston Larsen-Grand Island Heartland Lutheran - Mr. Bader was red hot and still heatin’ in the Red Hornets 66-63 basketball type score win over Spalding Academy. Bader connected on 26 of 44 passes for a massive 369 yards and three TDs with no interceptions in the opening game win for Heartland Lutheran.

The 6-3, 175 pound senior, who led the city of Grand Island in passing yardage a year ago, also rushed 9 times for 119 yards and a score, returned 4 kickoffs for 36 yards and punted once for 41 yards.

Junior Quinston Larsen was Bader’s primary target, catching 17 balls for 218 yards and 3 TDs. Larsen added 10 tackles on defense, but the Red Hornet leaders in that department were Trevin Carpenter with 12 stops and junior Mason Weaver with 11.