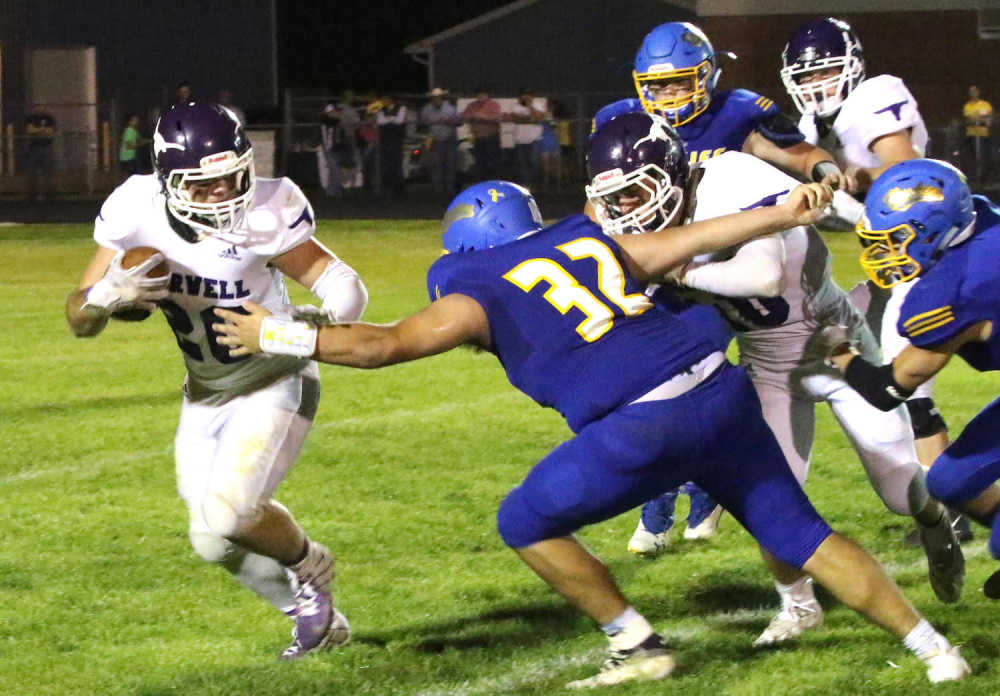 Caleb Busch, a 6-0, 170 pound sophomore RB, added 130 yards and a score on just 11 carries, as the young Burwell offensive line saw big advances from game one to game two.

Senior RB Jase Williams (#20) is one of a long line of power running, prototype, thousand yard Longhorn backs. All those great Burwell backs seem to run with a low center of gravity, causing nightmares for would-be tacklers. Williams, who ran for 1,809 yards last season and 1,205 his sophomore year (2017), is ranked #2 on Burwell’s all-time single season rushing list.

Tori Huffman leads the way on that list with 2,265 yards gained during that 2016 Class D-1 State Championship season.

The Thunderbird defense had 19 tackles for losses in the game, which was led by Matt Thompson and Jack McDonnell with 4 apiece. Junior Ryan Rogers followed with three, while Keenan Torres and Tyler Chaney added two each.

*Logan Johnson-Bloomfield - Better be sitting down for this one. In the Bees 56-26 victory over O’Neill St. Marys, the 5-10, 205 pound Johnson rushed 35 times for 239 yards and scored all eight Bloomfield touchdowns, scored 54 of the 56 points himself (8 TDs, 3 PAT kicks, 3 two point conversion runs) and completed a two-point conversion pass to Gabe Luack for the other.

I guess it’s safe to say Logan Johnson had a hand in all 56 Bloomfield points. Good grief, where do you go from there? So, when all was in the books, the senior rushed for seven touchdowns, pirated a St. Marys pass for a 41 yard Pick Six, and made 7 tackles for good measure.

All-Stater Tyson Gordon was simply pure gold in the win, completing 9 of 17 passes for 122 yards with scoring strikes to Max Brinker (10 yards) and Drew Rase (8 yards). The amazing senior also rushed 15 times for 132 yards with a 17 yard TD scamper. Tyson also picked off a Jack Dotzler aerial on defense to go with his 5 tackles. Gordon also was a perfect 6 for 6 on PAT kicks. Ho him, just another normal outing for the man.

You know what? I like this Gunner Ott kid. He made 5 solo stops in the Roncalli game and a week ago against Bennington, the dude ran for 78 yards on 11 carries and a TD, caught 2 passes for 20 yards and had 8 tackles on defense. Skutt just is loaded with players like Ott year in and year out.

*Jack Dotzler-Omaha Roncalli - May as well tell the other side of the Gordon/Dotzler battle story. In that heartbreaking 42-34 loss to Skutt, the closest Roncalli has come to the SkyHawks in sixteen years, the amazing Jack Dotzler completed 20 of 34 passes for 294 yards and a pair of 16 yard scoring tosses to Shane Orr. The magical senior QB also rushed the football 10 times for 51 yards and two touchdowns (1, 15 yards).

In just two games, Dotzler has thrown for an unofficial 455 yards and 4 TDs.

This isn’t the first time this bunch has pulled this deal off. They were pretty solid a week ago in Lincoln East’s 23-0 win over Lincoln Pius X.

Ethan Valencia gained 105 yards on just 10 carries, QB Tristan Gomes was not far behind with 86 yards on 23 tries and a 1 yard TD run. After Papillion LV drew first blood in the game taking a 7-0 lead, Kade Odermann came up with an immediate answer, promptly returning the ensuing kickoff 80 yards for a touchdown. Place kicker Nasser Nabusi was a perfect 3 for 3 on PAT attempts and booted a 36 yard field goal, which gave Millard West a 10-7 lead at the time.

Don’t forget, Valencia rushed for 157 yards a week ago against Millard North and Gomes had a buck 10 rushing and four TDs in the same game.

This is a good football team folks, but the ‘Cats don not have an easy schedule going forward, facing Omaha North and Millard South the next two weeks, then Omaha Bryan, then right back in the frying pan with games against GI, Kearney and Lincoln East.

On defense, Kole Bordovsky led Wahoo with 11 tackles, Grant Kolterman was next with 10 (7 solo crunches), Kyan Lausterer and Grant Kolterman each caused a fumble, while Trent Hollowell and Gunnar Vanek each recovered one of those caused fumbles.

The new Fremont signal caller must be getting the hang of it because he threw for 137 yards and a score on opening night in a 21-0 win over Lincoln NE.

Haughton has already thrown for 620 yards and 7 TDs for the 2-0 Warriors this season.

*Serbando Diaz, Quade Myers, Reice Haines-Dundy County/Stratton - All kinds of Tiger offensive stats in Dundy County/Stratton’s 80-34 win over Perkins County. Diaz, who ran for 1,938 yards and 28 TDs a year ago, carried only 8 times (70 yards) in the contest, but scored 4 rushing touchdowns (39, 5, 6, 8 yard runs) and caught a 63 yard TD pass from Myers.

QB Quade Myers, only the 7th freshman in history to rush for over a 1000 yards (last season) ran 7 times for 59 yards, reached the end zone on a 9 yard run, went 2-4 passing for two TDs (63 to Diaz, 14 yards to freshman Corbin Horner), and returned a Perkins County fumble 71 yards for yet another score.

Also really great to see senior Reice Haines, who missed half a dozen games a year ago with an injury, block a punt and return it 40 yards for a score.

All-State candidate Dominic Sis and Lane Shillington led the Tiger defense with 10 tackles each. Shillington also had an interception in the game.

*Russ Martinez-Grand Island Central Catholic - Ran for 160 yards and five touchdowns in the Crusaders 60-26 win at Superior. Coach Tim Dvorak thought perhaps the Crusaders would not have a thousand yard rusher this season due to the offense he was running, which distributes the ball to several different players. Looks like Russ Martinez may have different ideas about the situation, but I’ll venture a guess Coach Dvorak isn’t complaining too much about Mr. Martinez rushing stats thus far.

……...Next up, Part Three of Friday Night Lights Football Heroes