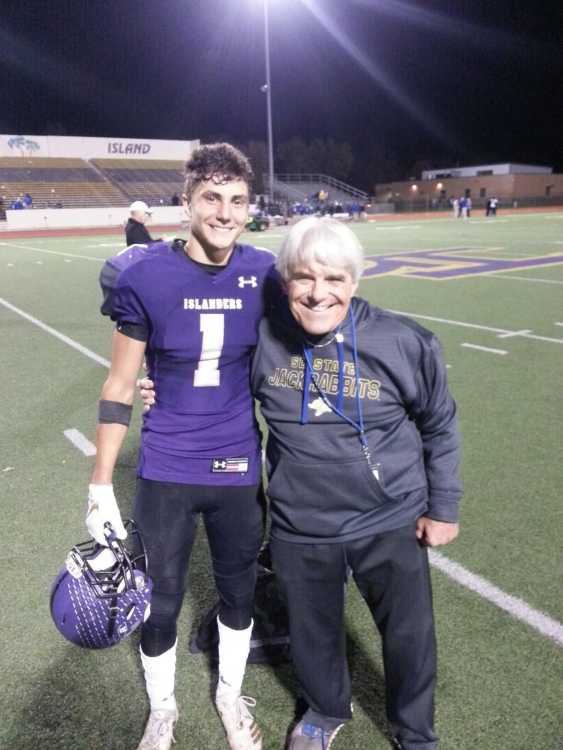 There were numerous outstanding performances last week, but one of the most satisfying, yet frustrating in the end, had to be our lead man, Bennington’s Nick Bohn.

*Nick Bohn-Bennington - You know, when all is said and done, what Badger QB Nick Bohn pulled off in the Omaha Skutt game last Friday will go down as remarkable, although I’m sure Skutt coach Matt Turman wasn’t overly thrilled with it..

This, by the way, isn’t Nick Bohn’s first rodeo throwing the football. Last season, he passed for 1,543 yards and 14 touchdowns for the 3-6 Badgers.

Just as a point of interest, Bennington unofficially ran 81 plays in that Skutt loss and only 13 were rushing attempts.

*Broc Douglass, Carson Cahoy, Caleb Francl-Grand Island - 2018 All-State Athlete Broc Douglass not only pirated a Kearney pass with 6:41 remaining in the game with his team trailing 31-25 to old rival Kearney, but proceeded to make a typical “Broc Douglass” 8 yard touchdown reception in the corner of the end zone with 3:14 left, giving his team a 32-31 lead.

The lead held up, the Islanders beat Kearney again, and Douglass closed out another magic night with 4 receptions for 73 yards and that 8 yard touchdown catch. Senior quarterback and former drum student Carson Cahoy completed 13 of 24 aerials for 172 yards and two TDs and rushed 4 times for an even 100 yards. That also included a critical 65 yard scoring dash with 7:46 left in the 3rd. The Islanders trailed 31-18 at the time.

All-State linebacker/running back Caleb Francl, who was impared by a badly sprained ankle suffered in the beginning stages of the 2nd quarter, still rushed for 84 yards on 11 carries and reached paydirt with a pair of 5 yard scoring runs.

Alex Bullock, Pat Foley-Creighton Prep - 6-1, 160 pound defensive back Alex Bullock saved the game for the Junior Jays, then place kicker Pat Foley won it for them. There’s more to than that, but what it boiled down to was Bullock picking off an Omaha North pass at the goal line with under a minute left in regulation, then Foley coming in an nailing a game winning 30 yard field goal in OT.

I didn’t catch whether Omaha North missed a FG attempt in the overtime, but honesty the Vikings usually never have a kicker on the team. Milton Sargbah, the 2,355 yard RB a few years back (2017), could boot extra points, but that type luxury rarely exists at a school like Omaha North.

Anyway, there were other contributors to the Jays opening night victory and they were;

Joe Boulay, who put the first Creighton Prep points of the season on the board when he picked off an Omaha North pass and returned it 90 yards for a score. Brayden Woodward, a Millard North QB transfer, who scored an important touchdown on a one yard one in the 3rd quarter.

Mason Armstead, who caught six of Prep QB John Coniglio’s 11 pass completions, good for 53 yards and a 6 yard TD catch, and last but not least, Junior Jays big TE AJ Rollins, who had a pair of catches for 53 yards.

*Blake Brown, Justin Erb-Wakefield - All Wakefield did on opening night 2019 was knock off defending Class D-1 Champion Creighton, 28-22. No easy task considering the Bulldogs returned 5 starters on each side of the ball this season.

Blake Brown (5-9,155, Jr.) made an outstanding debut at the varsity quarterback position for Coach Mike Hassler’s Trojans, rushing for 121 yards on 21 carries and a touchdown (33 yards) and completing 7 of his 11 pass attempts for 50 yards. Brown was also all over the field on defense, sacking standout Creighton quarterback Brayden Zimmerer on one play of a critical Bulldog drive, then pouncing on a Creighton fumble to kill the drive that would have tied the game had the Bulldogs scored.

Wakefield is a Class C-2 school that opts down to play the 8-Man game, which makes them ineligible to compete in the D-1 playoffs. That pretty much makes every regular season game huge for this team, who shows up and plays like it week in and week out.

*Russ Martinez, Zach Cloud, Tanner Turek-Grand Island Central Catholic - Martinez, the smooth operating 5-11, 165 pound junior QB, threw for 144 yards and 3 touchdowns, rushed 8 times for 83 yards and another score (58 run), and made 13 tackles on the defensive side in the Crusaders 35-14 win over Malcolm. Junior Zach Cloud, the GICC track star, reeled in 3 receptions for 56 yards and recorded touchdown catches of 7and 6 yards.

Another Crusader junior, Tanner Turek, pirated a pair of Malcolm passes and added 10 tackles (5 solos). Sophomore Isaac Herbek, the leading freshman receiver in all of 11-Man football a year ago, caught Martinez other scoring pass a play that covered 39 yards.

*Lincoln Southwest “D” - Silverbirds defense squashed Lincoln North Star’s offense to the tune of a minus 8 yards rushing, 102 passing and 5 first downs in their 29-0 whitewashing of the Gators.

*Luke Rocheford, Darrin Pokorny-Howells-Dodge - The speedy 6-1,170 pound Luke Rocheford (#1) accounted for 5 touchdowns in the Jaguars 42-14 win over Clarkson-Leigh in the annual “Bacon Bowl”.

Not sure why the opener is dubbed the Bacon Bowl, but Rocheford must like the venue because he rushed 6 times for 90 yards and TD runs of 53 and 41 yards, and reeled in 4 Darrin Pokorny aerials, good for 88 yards and three touchdown receptions that covered 57, 4 and 7 yards. Rocheford also made 8 tackles (2 for losses).

The multi-talented quarterback also made 9 stops on defense and punted the ball twice, averaging 40.5 yards a boot. In Eight-Man football that kind of average can land you a spot on All-State as a Punter, my friend.

*Hunter Washburn, Bryce Kitrell-Ashland-Greenwood - In the Bluejays 37-14 win over Ft. Calhoun, Washburn, the 5-10, 170 pound All-District QB, completed half of his 26 passes for 129 yards and a 20 yard TD toss to Seth Novak. Washburn also rushed for an additional 93 yards on just 6 carries and two long distance dashes of 51 and 32 yards. If you recall, Washburn threw for 1,416 yards and 19 TDs a year ago.

All-State athlete Bryce Kitrell racked up 153 all-purpose yards and 3 touchdowns for his usual monster performance. The Ashland-Greenwood star ran 17 times for 65 yards and a pair of TDs, recorded 50 yard Pick 6 touchdown, returned four punts for 43 yards and made 4 tackles on defense.

*Jacob Diaz-York - Senior speed merchant paced the Dukes in their 30-9 win over Alliance with 132 rushing yards on 18 carries and a TD, caught 2 passes for 48 yards and made 8 stops on defense.

*Connor Floyd-Sutherland - Sailors thousand yard rusher kicked off the 2019 season by rambling for 162 yards on 20 carries and touchdown runs of 65 and 36 yards as Sutherland pulled off huge 38-34 win over a strong South Loup squad. Floyd, who rushed for 1,296 yards and 24 touchdowns a year ago for the 7-3 Sailors, is one of Western Nebraska’s finest 8-Man running backs.

Jake Jarzynka, Trey Meith-Ravenna - Bluejays quarterback was on fire in Ravenna’s 54-10 opening night victory over Amherst. Jarzynka hit 10 of 20 passes for 190 yards and a score, and rushed 8 times for another 73 yards. Trey Meith, one of 8-Man football’s leading receivers the past year (692 yards/15 TDs), caught half of Jarzynka’s ten passes totalling 139 yards, and also scored on touchdown runs covering 12 and 14 yards.

*Grant Pease-Stuart - The 5-11, 160 pound running back shredded Niobrara/Veridgre’s defense with 281 yards on 19 carries and 5 touchdowns in Stuart’s 40-12 win last week. Pease also made 10 tackles on defense for the Broncos, who were 2-6 a year ago.