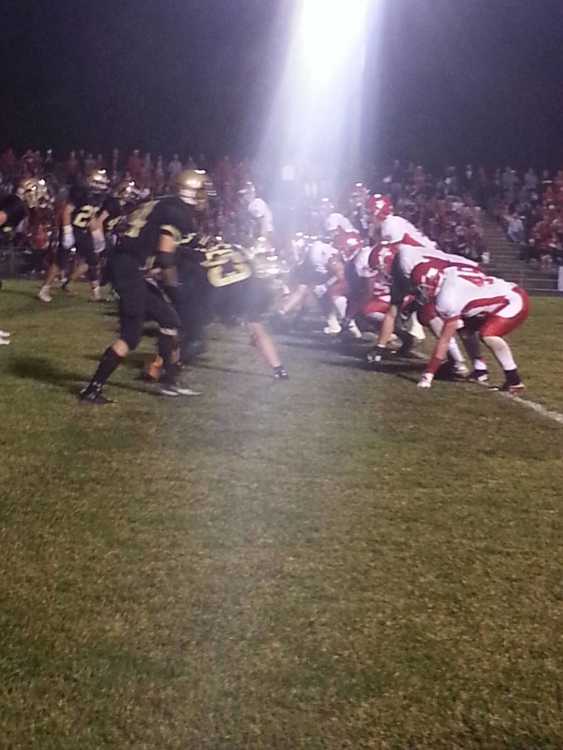 *Rex Becker-Hartington Cedar Catholic (OL*DL*) 6-3, 245, Senior - Best two-way lineman in C-2. Already a two-time All-State selection and just rock solid on both sides of the ball. Very strong with exceptional technique, which enables Becker to shed blockers and get the the man with the football. Main offensive hole opener for two-time 1000 ard rusher Jacob Keiser. Honestly, Becker strikes fear into offensive players when he lines up on defense. It only takes one crunch from Rex to make them very gun shy. It’s “Mister Becker.”

*Chi Onate-Gibbon (OG/DT), 6-5, 270, Senior - This man was part of the reason an 0-9 Gibbon team had a 1,300 yard running back (sophomore Sean Hampton) last year. Onate is a dedicated young man who is a very talented pulling guard and dearly loves to pancake (10+ last season) the dude across the line from him.

Chi (short for Malachi) made 40 tackles in 2018 and was a constant disruption to opposing defenses. Another standout product of super coach Mark McLaughlin, who is about to make Platteview a contender this Fall.

You will hear Chi Onate’s name more than a few times in 2019. Can play at the next level.

*Cameron Bettenhausen-Norfolk Catholic (DE/OLB), 6-4, 225, Senior - This young man is a very skillful two-way player for Coach Jeff Bellar and will be counted on for big time leadership this Fall for th Knights, who lost some key players to graduation in 2018. Bettenhausen had 71 tackles last year, which included a pair of sacks. He also intercepted 2 passes and recovered a pair of fumbles along the way to the State C-2 Final.

On offense, Cameron made his catches count big time. Four catches, 60 yards, with two going for TDs. Now, whether he plays defensive end or outside linebacker will make no difference, Bettenhausen will still be flirting with triple digit tackle numbers in 2019.

It all started with a great showing at the 3 Star Camp in East St. Louis at the end of May and continued when he committed to play football at powerful South Dakota State at the end of June.

Wyatt Seagren will be a huge part of Joe Anderson’s high octane 2019 Oakland-Craig football squad. The kid has a perfect Division One FCS build, will catch a bunch of TD passes this Fall, continue to make more pancake blocks without leaving his feet, and gobble up ball carriers and QBs.

Solid All-State material going into 2019. You will hear the name Wyatt Seagren a ton this year.

*Jaxon Johnson-BRLD (OL/DE), 6-3, 240, Senior - Large dude who can do pretty much what he wants on either side of the ball for BRLD. Last season Johnson made 80 tackles (14 for losses, with 2 sacks) and pounced on a pair of fumbles. Jaxon was one of four Wolverines registering 80 tackles or more in 2018.

Moves very well for his size, especially on offense. Last year, the 230 pound tight end caught 33 passes for a whopping 763 yards and 6 scores. That’s 30 yards per grab folks. And check this out. Jaxon was not even the Cougars leading receiver in 2018. In fact, he was 406 yards behind Lucas Vogt, who had 1,169 yards.

Expect another monster season for this big guy in 2019.

*Eric Escobar-Wilber-Clatonia (OL/DT), 6-3, 260, Senior - Very steady force at DT for the Wolverines last year, registering 46 stops, which was 2nd best for a lineman. Escobar is probably at his best in the O-Line, where he was an All-District player as a Junior.

*Matthew Elsten-North Platte St. Pats (OT/DE) 6-2, 190, Senior - Another All-District offensive lineman, but a guy that can also cause problems from his defensive end position. Awful tough when you consider Elsten played O-Line and D-End at a 180 pounds last year. Hey, that’ just simply St. Pats toughness. That’s the way they play out there in Kevin Dodsen country.

*Braden Peterworth-Sutton (OL/OT) 6-4, 300, Senior - Well, for starters, Peterworth has the strength to lift one corner end of the Sutton high school building off its foundation. Might very well be the best O-Line blocker in Class C-2. Squats half a 1000 pounds and paved the way for not one, but two 1000 yard rushers year ago. All you need to know.

*Eli Simonson-Fremont Bergan (OT/DE/DT), 6-7, 265, Senior - Not difficult to spot #66 on the football field. Impressive weight room stats and 39 tackles a year ago for the 6-4 Knights. Simonson is big time strong with far above average lower body (leg) strength. Draws a double-team block a good share of the time on defense and makes the tackle despite the extra attention. Powerful blocker on offense, and a man that sticks with his block until the play is over. All-State material for a Bergan team that will be a force this Fall with their incredible depth.

*Konner Adamy-David City Aquinas (DL), 6-1, 200, Senior - If Konner Adamy is the top returning lineman for Ron Mimick’s Monarchs, he must be pretty special. Never a huge bunch weight-wise, these Aquinas linemen get after it and are taught good, sound, fundamental football, and are ready for more action when the opposition is out of gas. I do know Konner Adamy loves getting to the quarterback.

*Alex Thomas-Doniphan-Trumbull (DL/DE) 6-5, 235, Senior - A ton of potential here. Strong as an ox and bigger than most. 37 tackles last year, 4 TFL, a recovered fumble and blocked field goal. Get after it in 2019 Alex. Make this a senior season to remember.

*Nathan Scheer-St. Paul, 6-2, 250, Junior - A force on both sides of the ball as a sophomore for the rising ‘Cats. This incoming Junior class is being touted as on of the best ever in St. Paul history, and Scheer and big Kaleb Peterson are two of the reasons why. Scheer had 27 tackles and a pair of sacks a year ago and helped create some nice openings for 1000 yard man El Larson, another junior to be star. All-State material, especially on offense.

*Kaleb Peterson-St. Paul, 6-4, 325, Junior - Big dude and if you’ve been around St. Paul football, the faithful will tell you Peterson was this big entering the 8th grade. Missed most of his freshman season with an injury suffered before the year started. Leads the returning linemen with with his 30 stops and two sacks registered in 2018.

*Josh Shaw-Sandy Creek, 6-2, 235, Sophomore - We’re going on bloodlines here, with Josh being the son of the great Brian Shaw (Sandy Creek/Huskers). Bloodlines, big kid, starts as a freshman and is named All-District…..all recipes for success, and in a hurry. Not certain if he played DE or linebacker a year ago, but 47 tackles as a 9th grader is highly impressive at either position, especially at D-End. No reason to tell you to remember the name, Josh will take care of that one.