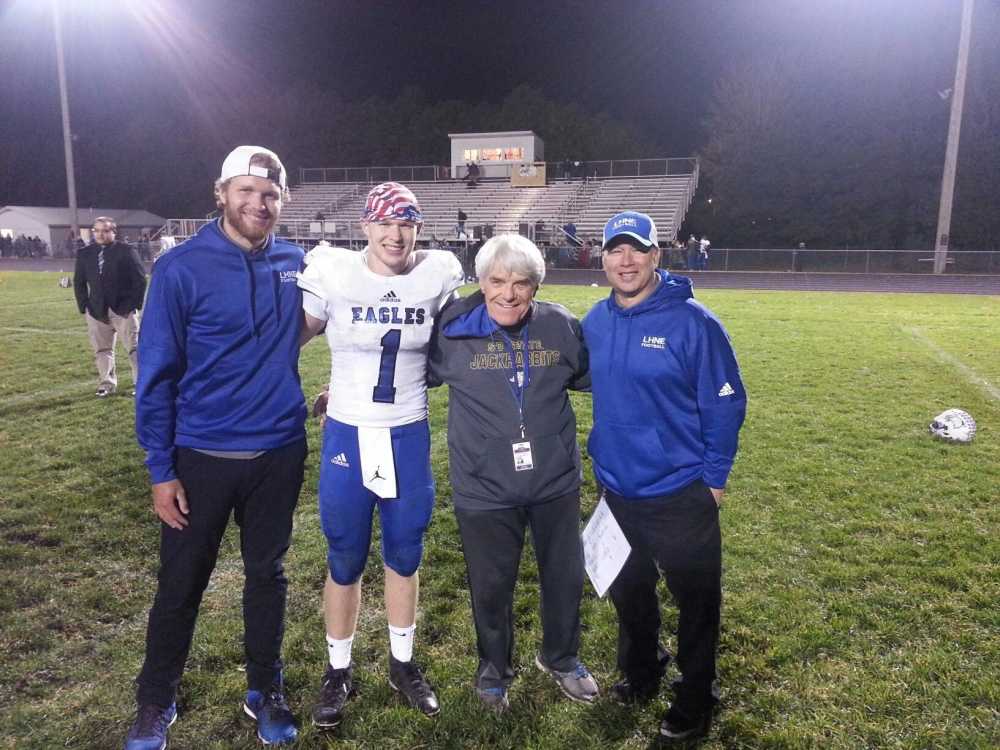 *Serbando Diaz-Dundy Co/Stratton - 5-8, 160, Junior, (1,938 yards) - Mother of Mercy this young man is complete football player. As sophomore, Serbando Diaz rushed for nearly 2,000 yards despite missing a pair of games due to injuries.

Check this out. The dude is 5-8, 160 pounds and can dead lift 350 pounds That is more than twice his body weight and could very well explain why Serbando made 93 tackles last season, 41 of which were solo stops. Nine of those 41 tackles were also sacks.

Serbando’s forty yard dash time is listed as :04.8, but his foot speed on the gridiron seems much quicker, enabling him to break long scoring runs after those lightning quick bursts through that Tiger O-Line.

Diaz makes subtle cuts, reads blockers well, is not afraid to bowl over defenders, and certainly has the upper and lower body strength to pull it off. Lots of yards after contact too.

Defensively, Serbando’s tackling technique is like a clinic. He goes for the ankles, wraps ‘em up like a calf roping cowboy, does the 180 degree twist, and down they go. Just like they coach it baby.

And don’t think about attempting that “ESPN Sports Center leap over the defender’s head” trick, because Diaz can meet you head on and stop you in your tracks before your feet even get off the ground.

(Something to keep in mind about Serbando Diaz and this Dundy County/Stratton team. Last season this bunch made it all the way to the Class D-2 quarterfinals with mostly freshman and Sophomores.

And oh by the way, Diaz has a fellow 1000 yard rusher with him in that Tiger backfield named Quade Myers, who also happens to be his quarterback.

*Jase Williams-Burwell - 5-10, 185, Senior** (1,809 yards) - This guy is about as tough to bring down as a grizzly bear would be on dead run after his prey. Williams has already been involved in two D-1 State Championship games and still has his senior season in front of him.

The Burwell steamroller, a two-time 1000 yard rusher and All-State selection, has amassed 3,950 career rushing yards with 50 touchdowns and is a prime candidate to enter the elite 5,000 Yard Career Rushing Club after this season. Williams needs 1,050 yards to make the elite 5,000 yard list and the chances are certainly looking very favorable at this point.

Jase did lose his great blocking buddy, Weston Svoboda to graduation, but Williams has enough young firepower in that Burwell offensive line to provide some openings for the powerful running Longhorn product.

Something to consider even though Buwell’s O-Line may be young in 2019. There certainly was no dropoff when Jase Williams took over to fill the shoes of the great Tori Huffman. That’s about as good as it gets 8-Man football fans, so get ready for No. 20 to roll for a whole bunch of real estate this Fall.

*Caden Kusek-Arcadia/Loup City - 6-1, 195, Senior** (1,743 yards) - Big, powerful, long-striding back that defenders want nothing to do with one he gets up a head of steam. Kusek, who ran for 23 TDs a year ago for a young Arcadia/Loup City team, is also a pass catching threat out of the backfield and a holy terror from his linebacker slot on that tightly aligned, brutal hitting Rebel defense.

Kusek recorded an even-steven 100 tackles in 2018 and is certainly a head-hunter with a nose for the football. From years of watching 8-Man football, I can tell you anybody that is six foot one and 195 pounds, is strong and has good speed, is most likely going to be a standout, and Caden Kusek fits that mold to a tee.

Look for big numbers again on both sides of the football for Kusek as Arcadia/Loup City establishes itself as a major contender in Class D-1 this Fall. Those boys just flat out know how to hit you up there in Paul Henry country.

*Brayden Zimmerer-Creighton - 6-1, 180, Senior (1,516 yards) - If they come any tougher than this guy, I would be shocked. As Coach Zach Kliment said, the kid has been through about as many injuries as there can be, and always bounced back. The only thing I ever saw stop Brayden Zimmerer from continuing occurred in the D-1 state finals last season.

A big sack by a Burwell defender actually appeared to knock the Creighton quarterback unconscious in the middle stages of the second quarter. Zimmerer had to be carted off on a stretcher and of course, was not allowed to continue because of concussion protocol. At the time, Brayden Zimmerer had already rushed for 161 yards on 15 carries and scored both Bulldog TDs on runs of 18 and13 yards.

Of course we all remember Brayden’s cousin Bryce Zimmerer taking over the quarterbacking duties, then proceeding to rush for a state championship record 320 yards on an unheard of 53 carries, leading his Creighton Bulldog team to a 32-30 in over a rough and tough Burwell squad.

Back to Brayden Zimmerer, to illustrate how versatile he was a year ago, the junior QB rushed for 1,516 yards on just 127 carries (11.9/per) and 27 touchdowns. This was in the same Bulldog backfield that featured cousin Bryce Zimmerer going off for 2,744 yards on the ground!

Oh yes, Creighton did throw the football last season, having scored over 70 points on 5 different occasions and Brayden ended 2018 completing 49 of 83 aerials for 786 yards and 13 touchdowns with only 3 INTs. And surely one would assume the man played defense?

Nope, we’re not finished. Brayden Zimmerer also rushed for 714 yards on 83 carries and 12 TDs his Freshman (2016) year. So, that totals 2,554 yards rushing and 48 TDs the past three seasons and I personally feel that Zimmerer hasn’t even began to amp up his passing game as of yet. Bad news for Bulldog opponents in 2019.

Stay tuned for another big season for the indestructible Brayden Zimmerer.

*Jaxson Kant-Lutheran High Northeast - 5-11, 180, Senior (1,509 yards) - The Renaissance Man of Class D-1 football. Possibly the most electric, entertaining player to watch in all of 8-Man football, Jaxson Kant is definitely the man that orchestrates the Eagles attack, an attack that led all of powerful Class D-1 with 482.6 yards a game. That’s even tops 2018 Class D-1 Champion Creighton’s 468.2 yards per game

Dual-Threat quarterback may be an understatement for Jaxson Kant. The guy is always, always thinking a step ahead of the game and is as durable as you’ll find.

Jaxson Kant is the perfect QB for Head Coach Darin Suckstorf’s LHNE offense. They ask a lot from their quarterbacks in that program, expecting them to be Dual-Threat guys that post big numbers offensively. It just happens that Kant is about as good as it gets right now.

Last season was the first time Lutheran High NE dropped back into the 8-Man ranks since the school opened, and you saw Jaxson Kant’s numbers. Phenomenal. The guy is literally the Energizer Bunny. Never runs out of gas as witnessed by the playoff game with a fine Osceola/High Plains team I saw last November.

Just when you thought that great Osceola/High Plains crew had the advantage, Kant would pull off another great play. He has a bushel basket full of moves, loves the spin move, and has the speed to pull away from defenders with ease. Most importantly, Kant possesses very high football intelligence and uses it on every play.

In a 62-42 win over a good Laurel-Concord-Coleridge team last October, Jaxson hit 11 of 17 passes for 259 yards and 4 TDs and ran 25 times for 225 big ones and two more scores. Perfect illustration of how good it can be with #1 at the controls.

*Jace Connell-South Loup - 5-8, 150, Senior (1,451 yards) - Pound for pound, South Loup’s Jace Connell is in the “As-Tough-As-They-Come” category. Last year, playing quarterback at 5-6, 130 pounds, Connell led South Loup to an 8-2 record with both losses coming by a lone touchdown. The 21-14 regular season loss came at the hands of Burwell, who lost that 32-30 Class D-1 Championship game to Creighton, with the other being a 2nd Round Playoff overtime defeat to quarterfinalist Dundy County-Stratton (20-14).

Connell, who is as deceptive and quick-thinking as there is in Western Nebraska, ran for 1,451 yards and 22 TDs last season, threw for another 496 yards and 7 scores, and added another 227 yards on punt and kick returns. The kid with the big football heart was also a standout on defense, collecting 52 tackles, defended 20 passes, and snared 5 interceptions for his Arnold/Callaway team.

Two years ago as a sophomore, Jace Connell played a big role on this South Loup squad, as super coach Andy Schwarz forces made it all the way to Memorial Stadium before falling to a powerhouse East Butler team, 36-14. In that game, Connell caught 6 passes for 66 yards and a TD, made 8 tackles on defense and not only caused, but recovered a fumble in that title matchup with East Butler.

To demonstrate how versatile Jace was that sophomore season for South Loup, check this out. Connell completed 9-15 passes for 67 yards (remember they had an All-State QB named Jack Rush), rushed for 293 yards and 3 TDs (151 of those and all 3 TDs coming in a 47-26 win over a terrific 6-1 Elm Creek team). Jace also caught 28 Jack Rush passes for 395 yards and six touchdowns, and amassed another 543 yards on returns.

Hold on, Connell also made a whopping 84 tackles on defense (15 for losses), intercepted a pass and recovered a fumble. All this coming during his sophomore season in 2017.

So, Jace Connell had to make some adjustments (putting it mildly) last season, coming off that state runner-up finish in 2017. The junior came through with flying colors, but this coming football season will be Connell’s biggest test yet.

South Loup not only suffered heavy graduation losses, but lost an outstanding 20 year head coach in Andy Schwarz, who stepped down after last season. So Jace Connell will move to running back in 2019, as South Loup hopes to rebuild around he and big All-State lineman candidate, 6-4, 200 pound Grant Jones.

I’m thinking Jace Connell still shines like a bright star this Fall despite the rebuilding year up there.

Let me see, high schools have been playing football in Nebraska since at least 1920 when Cambridge was declared state champion, although Beatrice would like to have had a shot at the Trojans that year.

Anyway, that’s nearly 100 years ago, and during that time, according to my extensive research, there have been only eight freshman to rush for over a thousand yards in a single season. Quade Myers became the 8th man to do just that last season when he ran for 1,428 yards for Dundy County/Stratton. Pretty elite company I’d say.

Needless to say, Quade Myers plays well above his years at the QB position for Coach Michael Spargo down in Benkelman. The kid made quick, intelligent decisions for a freshman a year ago and will only get better as time goes one. Myers has exceptional football speed and very quick feet with the ability to change directions in an instant. His impressive field vision certainly doesn’t hurt matters either.

It was a banner year for a very young Tigers squad and the fact that Myers grew an inch and put on 15 pounds of weight room muscle makes the Dundy QB even tougher to contend with in 2019. The kid also has a sensational throwing arm and will be more of a Dual-Threat man out of the back field this Fall.

This is a scary football team friends, with 7 starters returning on each side of the ball. This is the type of team that could go very deep into the D-1 playoffs in 2019. Like Memorial Stadium deep if everyone stays healthy.