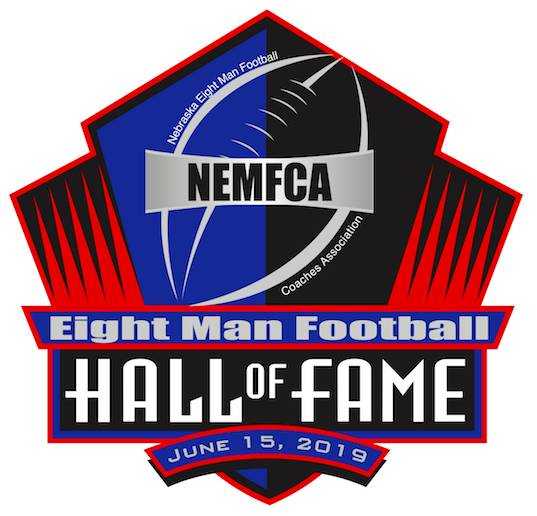 We spotlight our 16th individual to be inducted into the Nebraska Eight Man Football Coaches Association Hall of Fame, Mr Eric Ryan, Overton High School. More on Eric below his bio.

As a Tight End and Defensive End, Eric led The Eagles to their 1st playoff victory in school history and a Class D1 State Runner-Up finish in 1994. During his prep career, he broke school records in tackles (428) and receiving yards (1,908). In both his junior and senior seasons, he was named 1st Team All-Conference, 1st Team All-State, and Defensive Player of the Year. Eric was selected to play in the Nebraska Shrine Bowl and was also named the Most Valuable Defensive Player of The 1995 Eight Man All-Star Game. He then went on to a successful college football career at The University of Nebraska where he was a part of 3 Conference Championship teams and 2 National Championship teams for the Cornhuskers. After college, Eric returned to Overton to coach his Alma Mater for the last 18 years. His goal has been to share a lasting football culture that began with he and his teammates in the 1990’s. As an assistant coach in 2006, Eric’s career came full circle as helped the Eagles to their 1st ever Class D-1 State Football Championship. The NEMFCA is honored to welcome him into the Eight Man Football Hall of Fame Class of 2019.

An 8-Man football guy selected to play in the Shrine Bowl must be a pretty salty player since only two are usually chosen each year. It is then safe to assume Eric Ryan was one of the best 8-Man dudes back in his day when he played for Robbie Simpson at Overton.

No assumptions needed from this end due to the fact I saw Eric Ryan play against Potter-Dix in the opening round of the ‘94 D-1 playoffs and the Sertoma 8-Man All-Star game the next summer. The dude was the real deal.

I really thought Overton had a great shot at besting Cory Eikmeier, Jeff Uher and that Dodge crew in 1994. They led every major statistical category on both offense and defense, but of course games are not played on paper.

When Overton jumped on Coach Pilmore’s troops 20-6 after the first quarter, I’ll bet the Overton crowd was preparing for a celebration following the victory. But alas, the Pirates outscored Overton 20-0 in the money quarter and Dodge had their 1st of 4 consecutive Class D-1 football championships.

Hey, don’t think for a moment that Eric Ryan didn’t do his job in that title game. The guy hauled in 8 passes for 108 yards, led the Eagles in rushing with 56 yards and made 20 tackles in the 52-33 loss, a game Overton still led 33-30 going into that final stanza.

Eric Ryan was really a force on either side of the ball, as mentioned above. As a pass receiver, Ryan compiled 767 yards his junior year and followed that with 666 yards and 13 receiving TDs his senior season. On defense the 6-0, 195 pound senior was everywhere, logging 241 stops, most of which were painful.

And, in addition to all his other school football records, Eric Ryan still holds the Overton record for…….drum roll please (I can handle that task).......the longest field goal (35 yards).