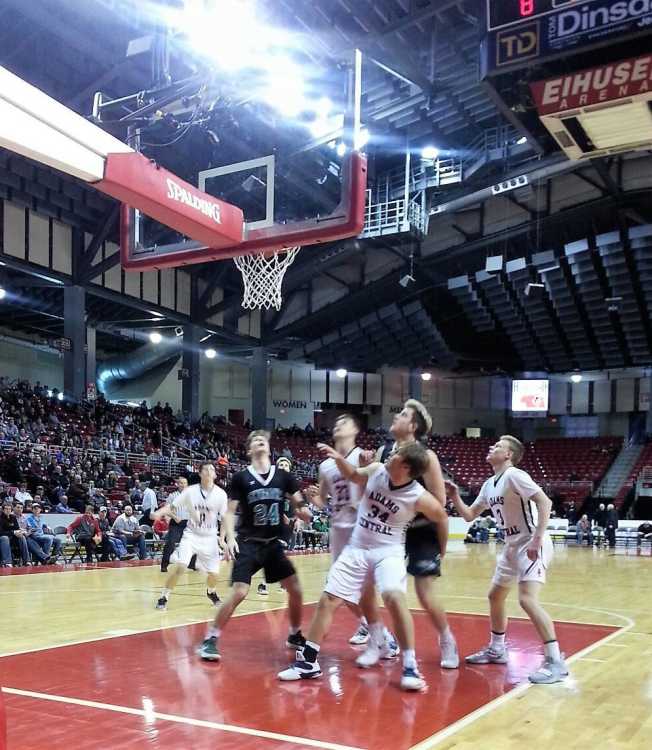 As usual, the 2019 Heartland Hoops Classic in Grand Island on Saturday provided an in depth look at some top notch individual players, as well as a somewhat measurable gauge of where teams are situated heading into the sub-district basketball season.

True to form, promoter Tino Martinez arranged a terrific 8 game program that consisted of highly interesting matchups. Nobody on the planet can guarantee nail-biting finishes in every game, but the Hoops Classic nearly always provides coaches, players and fans an idea where their respective teams stand heading into the postseason.

Coach Martinez always makes it a point to arrange games between two quality basketball teams who would not normally play during the regular season. Making it more impressive is the fact Tino must make these matchup arrangements a year in advance, knowing what teams will be big time players the following season

*Baylor Scheierman-Aurora - Made it look easy, as usual, in the Huskies 72-52 route of Class C-1 Cozad. What isn’t normally that easy, is the triple-double the Super-State quarterback pulled off against the Haymakers. 19 points,17 boards and 15 assists in a game he considered wasn’t even his most productive outing. Baylor reminds me of Minden’s Mark Etzelmiller back in 1975, who led that team all the way to the Class B semifinals before losing to Omaha Tech, a team who had dropped down from Class A. Aurora coach Tom Leininger thinks Scheierman plays football on the basketball court with his “touchdown passes”. Husky football coach Kyle Peterson told me in an earlier interview “Baylor plays basketball on the football field with his keen vision.” And the beneficiaries of all this...the athletes that played both football and basketball with the Aurora superstar……..they’ve seen his moves their entire lives. Scary.

*Brady Danielson-York - Had 13 first quarter points, 19 by halftime and 26 for the game, in the Dukes 63-43 win over Bennington. After scoring 29 the night before against Seward, the Dukes floor leader and inspirational catalyst, made certain his team was off to another quick start in a game that was a rematch of last years Class B semifinals versus the same Badger squad.

*Joseph Bloom-Riverside - 31 points, 18 rebounds, 3 dunks and several blocked shots in the Chargers 72-59 win over a very good Loomis team. Pretty impressive early morning work for the 6-7 senior post player, who was playing his 3rd game in as many days. Toss in the fact Bloom picked up his 3rd foul a couple of minutes before halftime.

Also throw in the fact Joseph had faced a true “big man” on both Thursday (Spalding Academy’s Mathew Bloom (6-6, 200) and Husker football commit Ethan Piper, who is a monster at 6-4 and 280 pounds on Friday.

You might also consider the Norfolk Catholic game may have concluded somewhere around 8:15 pm on Friday and Riverside had to make the 75 mile trip from Cedar Rapids the next morning to be off and running for that 9AM tip off at the Events Center.

You get the picture.

*Lucas Vogt and Will Gatzemeyer-BRLD - Vogt, the 5-11 sophomore, scored 21 points and grabbed 9 boards, while his 5-10 junior backcourt counterpart Will Gatzemeyer added 20 more in BRLD’s 68-52 win over Class C-1, 10th rated Auburn. Vogt, who is also a constant force defensively, and Gatzemeyer, are two of 11 underclassmen on a BRLD team that plays suits only ONE senior.

*Aaron Dow-Loomis - 6-3 senior, who recently recently hit the 1000 career points mark, drained 25 big ones in the loss to Riverside. Dow also had to front Joseph Bloom much of the contest, despite giving up 3 inches in height. Dow displayed some real quickness, which is probably part of the reason he is one of Class D-2’s scoring leaders, averaging 23.6 ppg. Smooth as silk stroke.

*Cam Binder-Auburn - Legendary head coach Jim Weeks has one outstanding sophomore gunner in Cam Binder who tossed in 21 points in the loss to BRLD. The 6 foot Binder is a key force in a terrific youth movement on Coach Weeks 20 player roster, which lists 19 underclassmen. Remember, the Bulldogs are sitting at 17-3 right now with these youngsters.

*Tyson Gordon-Omaha Skutt Catholic - Always going to be my favorite Skutt player even if he doesn’t lead the SkyHawks in scoring. Jake Kudron (20) and TJ Skradski (14) led the scoring parade in Skutt’s 71-50 win over Adams Central, but it was the play of the multi-talented Gordon that most impressed me. The 6-3, 165 pound All-State football defensive back demonstrated his wide variety of talents with his 10 points, 7 rebounds, and 7 assists. Gordon also hounded A/C shooters and ball handlers all afternoon.

Tyson Gordon is your typical all-around Skutt Catholic athlete who would probably be an All-State table tennis player if the school offered the sport.

*Connor Creech-Hastings - Simply “willed” his team to win by his key plays down the stretch. Held in check by Class C-2 Freeman’s menacing 2-3 defensive alignment, the 6-3 junior son of head coach Lance Creech nailed a 22 foot three pointer from the top of the key with a little over a minute left in the game to break a 40-40 deadlock. Creech then calmly drained 2 free throws with three ticks left in the contest to seal the 13-5 Tigers 45-40 win. It was Quentin Synek’s 14 points (4 treys) that led the Hastings scoring, but it was the spirited leadership of Connor Creech that made my day in that Heartland Hoops Classic curtain closer.

*This one comes under the “never had a chance to display my talents” category……..

*Cooper Prososki-Bennington - After nailing a couple of long 3 point shots early in the York game, the 6-2 senior all-state player suffered a thundering crash to the Heartland Events Center floor and really never recovered. Despite scoring 10 points and raising his career scoring mark to 1,204 points, Prososki was forced to sit out some of that York game and seemed a bit groggy when he returned. York’s hounding defense didn’t help matters either, but Cooper may have been able to hit a few more shots had he not hit the floor so violently.

Great basketball player who shoots 49% from beyond the arc and 60% from 2 point land. All-State player as a junior.

*York - Are the defending Class B state champions just starting to hit stride? Sure looked like it last weekend with those victories over Seward and Bennington. Don’t be fooled into thinking the Dukes are merely a two-headed scoring monster with Brady Danielson and Garrett Snodgrass. Playmaker Jeb Lucas, along with Reid Hoffman and Wyatt Cast, can do some damage on offense and all possess super quickness on defense.

Lincoln Pius X and Omaha Skutt seem to be considered a cut above the second level of York, Aurora and Omaha Roncalli, but the Dukes won it all last season and are at full strength heading into the postseason.

*Aurora - After seeing Baylor Scheierman perform his magic, one would have to think the Huskies are a key contender in the Class B race, along with Pius, Skutt, York and Roncalli. Like York, don’t be foolish and believe Aurora is a one-trick pony. The Huskies are blindingly quick on offense with Cade Reichardt, Nick Hutsell, Nathan Boerkircher and Jordan Stevenson all capable of double digit scoring on any given

night...especially Reichardt, who is deadly from 3 point range.

*BRLD - Mother-of-Mercy, this Class C-2 band of underclass studs is just plain frightening. Corey Meyer’s 20-1 Wolverines fear no one, as witnessed the 68-52 win over Auburn on Saturday. The only blemish on the BRLD record this season is a 61-51 December 14th loss to a good Howells-Dodge team. That loss was avenged 15 days later when the Wolverines clobbered the Jags, 58-34 in the finals of the Howells-Dodge Holiday Tournament.

So powerful are these Wolverines, that not one opponent in their 20 wins has come closer than 10 points. And the combined record of their last 7 opponents…..108-42.

Yes, Class C-2 is a super loaded class this year with teams like Centennial, Sutton, Freeman, Laurel-Concord-Coleridge, Yutan, Wakefield, Tri-County and the invaders from the West, Bridgeport, but his BRLD team has to be right near the top of that list. Just remember BRLD names like Lucas Vogt, Jaxon Johnson, Will Gatzemeyer and Darwin Snyder, plus a Head Coach (Cory Meyer) that said this following BRLD’s Heartland Hoops Classic victory over Auburn “If we play basketball like that, no one can stop us.”

The man may just have a point there.

*Riverside - Awful tough to contend with the inside presence of 6-7 Joseph Bloom and the deadly outside shooting of junior Tredyn Prososki, who many say is the finest pure shooter in the state, and 6-3 sophomore Michael Bernt. Both Prososki and Bernt have hit 13 three pointers in a single game this season.

Add the fact that Chargers Head Coach Joy Imus is one of the finest hoops coaches in Nebraska and was a long range sharpshooter and frequent dunker at Albion in his high school days, giving even further credibility.

It was just a year ago that Riverside advanced all the way to the Class D-2 finals, where super coach Doug Goltz and his Falls City Sacred Heart team steadily pulled away from Riverside, enroute to a 59-42 win and with it, a D-2 championship.

Many of the same faces are back for both teams and Imus seems to think that the tough 3 games in 3 days grind this last weekend will help prepare his team for a stronger mental approach in this upcoming postseason.

*Freeman - Speaking of Class C-2, how about this Freeman squad who nearly beat a Class B, 13-5 Hastings team late Saturday night? The Falcons are long, athletic and play one of the meanest, most efficient 2-3 defenses I’ve seen this season. Last night in the Hastings game, the minute the ball was passed from one offensive player to another, there was immediately two Freeman defenders covering him like a blanket. And those Hastings passes were crisp too.

On offense, the length of the 17-4 Falcons presents problems for nearly every opponent they have, and will face. Brady Ideus measures 6-8, Kaleb Unvert and Trey Yates check in at 6-5, and Tyler Adams is 6-4. Thus far, beside the Hastings loss, the only other setbacks Freeman has suffered are to Auburn (17-3) Falls City Sacred Heart (20-1) and 16-4 Tri-County. Freeman has also beaten Class C-1 power, Lincoln Christian, 17-5 Yutan (twice) and an outstanding Johnson-Brock team (18-3).

Will Freeman be a Class C-2 factor in the postseason? That would be a YES.

*Grand Island Central Catholic - Did this basketball team turn the corner with their 52-43 win over 4th rated (C-1) North Bend Saturday afternoon? Time will tell for a team that has faced a brutal schedule that includes 7 losses, all to very good basketball teams. I see this team play every home game since I am the PA voice of the Crusaders, and the only “bad” loss I witnessed came at the hands of a surging Lincoln Christian squad.

GICC came within a single point of beating C-1, #1 Wahoo in overtime at the Warriors house. They also suffered an overtime road loss (60-53) to a terrific Adams Central group. Other losses were to Class B York and Lexington and another overtime setback to 16-4 Kearney Catholic. The opening season loss to Lincoln Lutheran was avenged during the Centennial Conference tournament.

This team has a nice mixture of youth and senior experience with 6-6 Nebraska football walkon recruit Jacob Herbek and leading score and 4 year starter, Jack Goering. Freshman Isaac Herbek, along with sophomores Russ Martinez (NOT Tino’s son) and Koby Bales, represent a very promising future for the Crusaders, who could very well make it to Lincoln with this current group.

*Adams Central - Coach Zac Foster’s Patriots are right smack dab in the thick of the Class C-1 title race with do-it-all player Hagen Hilgendorf, a 6 foot 9 inch guy who can play inside or step out and nail a three. The A/C ring leaders are seniors Nolan Sughroue and Thomas Hunt, who along with sophomores Tyler Slechta and Cam Foster, can destroy you with their usually accurate long distance shooting.

Adams Central is certainly a dangerous draw for anyone in the rugged Class C-1.