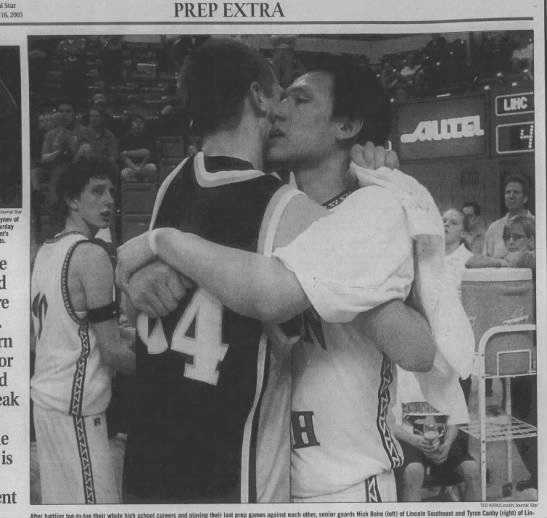 After battling head to head their entire high careers, and playing their last games against each other, Nick Bahe (L) of Lincoln SE and Tyron Canby (R) of Lincoln High hug after Canby and the Links won the Class A Championship game.

Classes A and B were divided into six districts with the district champions and two wild card teams, selected on the basis of a point system, qualifying for the state tournament. Lincoln High and Kearney were the wild card teams for Class A. Beatrice and Blair were the Class B wild card teams. For the second time in NSAA history Classes C1, C2, D1 and D2 also had two wild card qualifiers. Classes C1, C2, D1 and D2 were divided into twelve sub-districts and six districts. The winners of the district finals in each class advanced to the state tournament. The two non-district champions with the highest wild card average received invitations to the State Tournament. The Class C1 wild cards qualifiers were Syracuse and Pierce. West Point Central Catholic and Malcolm were the C2 wild cards. In D1, Falls City Sacred Heart and Greeley/Wolbach received the wild cards. Shickley and Wheatland were the D2 wild card winners. Paid attendance from all sites: 93,639

*The Class D-2 tournament scoring battle between Shickley’s 6-10 post Bob Kempf and Lynch sharpshooter Nate Eilers went down to the Championship game before things were decided. It was Kempf who emerged the leader with 62 points (19, 28, 15 pts), outscoring the 6-5 Eilers, who scored 62 (24, 20, 17 pts) during the 3 day festivities. It was Eilers and friends, however, who walked away with the hardware via the resounding 63-38 win over Shickley.

*The Class D-2 final saw Shickley’s 6-10 Bobby Kempf score 8 of his team high 15 points in the first quarter, yet still trail Lynch 14-10. So, the strategy of Lynch coach Kris Freeland to let Kempf “get his points” must have worked like a charm, because Shickley began to look away from Kempf and to their other four starters for points in the second stanza. Didn’t work.

Lynch stretched the lead to a 29-20 halftime advantage and never looked back. Lynch scoring leader Seth Hadenfeldt canned 17 of his game high 25 points in that opening half, then turned over those chores to brother Matt and high scoring Nate Eilers in the second half and the route was on.

After being sent home from the state tournament the year before with an opening round 57-49 loss to Greeley/Wolbach, the Eagles were bound and determined to make amends, headbands and all.

*The D-1 Tournament scoring title was decided before the Finals when Howells super-junior Mat Eikmeier posted back-to-back scoring games of 24 points. It was a slowdown final clash with the Pirates coming out on top 32-31, but all Eikmeier would need was 7 points that day to secure a D-1 scoring title with a three day total of 55 tallies. Spencer-Naper’s three-time all-state John Connot was second with 42 points (14, 21, 7 pts.)

*The D-1 championship game: Never forget this one as long as I live. Amongst the mumbling, grumbling and belly-aching by much of the crowd and many on press row, I found a silver lining in Spencer-Naper’s 32-31 Championship win over Howells. It was a pure display of defensive athleticism by both teams, as Spencer-Naper slowed the offensive play down to a trickle….except for their crisp, blinding semi-circle passing. The idea was to work the ball back and forth so quickly that Jim Morrison’s Howells crew would finally not be able to shift with the Pirates, creating an open shot. Rarely happened in the game.

Spencer-Naper ended up shooting 31.7% from the field. Howells fared worse, hitting only 26%. It finally came down to Pirates super coach Jim Carlson calling a time out with 5.7 seconds left in the game. Carlson decided to go inside to 6-3 junior Kurt Dummer, whose 52% free throw shooting percentage made him an unlikely candidate to win the game should he be fouled. But Coach Carlson made a great call.

Dummer, whose school teacher mother had died the year before, was fouled going to the hoop with the score all square at 31. The junior missed his first free throw attempt, took a deep breath, and was perfect on the second shot. Howells still had a chance to win it, but Spencer-Naper got back quickly and forced Howells Mat Eikmeier to take a 25 foot shot that bounced harmlessly off the front of the rim.

The win gave 27-0 Spencer-Naper their 2nd consecutive state championship and also saw the Pirates compile an mind-boggling 82-1 record over the previous three seasons. Their only setback during that magical span was a loss to Falls City Sacred Heart in the 2001 Class D-2 title game.

In defense of the press row grumbling, the 32-31 state final score was the lowest scoring state championship game in 51 years. Turned the clock back a little bit, eh boys (and girls)?

*The Class C-2 Championship game featured an “in your face” Sutton coach Steve Spongberg defense that saw the Mustang’s Casey Nuss smother West Point CC’ high scoring sophomore guard, Bryan Medlik to the tune of 1 for 6 shooting from the field. The result was a 47-42 win for Sutton over a Bluejay team that flat out could shoot the basketball.

Mendlik, who was only 5-6, had already nailed 13 treys and scored 52 points in the first two state tournament games for WPCC, simply couldn’t get it going with Nuss three inches from his nose the entire game. That is simply Steve Spongberg defensive basketball my friends. Nuss was equally effective on offense, especially during the third quarter.

The Sutton senior scored all 10 of his points in that crucial period, helping the Mustangs recover from a 6 point deficit. Ironically, Nuss was 0 of 3 shooting in the first half with 4 turnovers, but his third quarter offensive heroics and game long defense made him the hero in the Sutton win.

Casey Nuss, the Sutton quarterback during football season, was always the man Spongberg turned to when the Mustangs needed a basket. All of know those football dudes come through on the hardwood when you need it, right?

*The C-1 championship game: Wahoo Neumann added a Class C-1 State basketball title to go with it’s 2002/2003 State Football Championship by defeating undefeated Chase County 68-52 in the C-1 game for all the marbles. Both teams entered the game with unblemished records, with Bishop Neumann stretching it’s season mark to 26-0, the school’s first unbeaten season in history. The Cavaliers also extended their winning streak to 36 games, dating back to 2002 when they won a C-1 title with a victory over Columbus Lakeview.

Head Coach Mike Weiss, still the head man at Neumann as we speak, won a State Championship in his first year after succeeding Paul Johnson. Big, athletic Kyle Prohaska buried 22 points in the game to take scoring honors, as well as pulling down 13 rebounds.

Chase County actually led 36-35 at the halftime break, but the suffocating Neumann defense held the invaders from the West to a meager 16 second half points and a paltry 6 for 22 shooting beyond the arc. Not one Chase player could hit double figures, with All-State Ed Kaiser and Jason Burke coming with 9 apiece, to be the closest.

*The Class B final: Norris repeated as Class B State Champion with their 49-42 win over Ralston, but it wasn’t easy. The lead changed 9 times during the first half and it wasn’t until the one and only Michael Stoynev scored 10 of his game high 24 points in the final frame, that Norris felt like they could put away Bill Heard’s 13-12 Rams.

Jacob Chandler led Ralston, who wasn’t even expected to make the Class B state tournament field, with 18 points and 10 rebounds. After opening the season with 7 straight wins, the Rams would lose 12 of their next 14 games, heading into to District play riding an 8 game losing skid. But the Rams caught fire at the right time, a tribute to Bill Heard’s coaching ability, and not only made it to the finals, but gave Michael Stoynev, Zach Yelkin and the Norris Titans a run for their money in the Class B finals.

*The Tournament scoring honors went to Jake Brestel of Lincoln High. The 6-6 senor hit 47 (26,12, 9 pts) during the Links three day march to the Class championship. Nick Bahe from Lincoln SE was runner-up with a 2-day total of 42 points. The Knights senior would have been the scoring champ had he played on Saturday……..but then again, if It’s and But’s were Candy and Nuts, it would be Christmas every day…..right?

*The Class A championship game: Appearing in the Class A finals for the first time in 26 years, Lincoln High made the most of their opportunity by turning back Nick Bahe and the Lincoln Southeast Knights, 43-38. But I, for one, certainly did not think that would ever happen after the Links went the opening 10 minutes without scoring a single point…..not one. Nine turnovers, 7 missed shots and a big goose egg on the Bob Devaney scoreboard compared to the Knights 13 points.

That’s right, 13-0 Lincoln Southeast until Links ace Tyron Canby hit a bucket to break the scoring drought two minutes into the 2nd stanza. Canby, a lad of American Indian descent, said the Links were used to overcoming obstacles on their way to the finals. He wasn’t kidding.

After all, Lincoln High had to score the final nine points in the opening round game just to send the thing into overtime before dispatching Omaha Central, 68-61. The next day in the semifinal game against Omaha Westside, the Links watched a 4th quarter lead evaporate and Lincoln High needed a last second putback to gain a 46-44 win and advance to the Class A finals.

So goes the life of the Cardiac Kids of Coach Russ Uhing.

In winning the Class A title and finishing with a 19-3 record, the Links avenged all three losses suffered during the year. The Lincoln East setback during a Holiday Tournament, a loss to Southeast and that District final loss to Omaha Westside. Yes, Lincoln High got into the 2003 Class A state tournament with a wild card.

Lincoln High won the game with only one player in double figures and that being Nick Madsen, who took scoring honors in the game with 11 points. But I thought it was the Links staunch defense that made the difference. Southeast as held to 5 of 21 accuracy from three point land and 30% field goal shooting for the entire game.