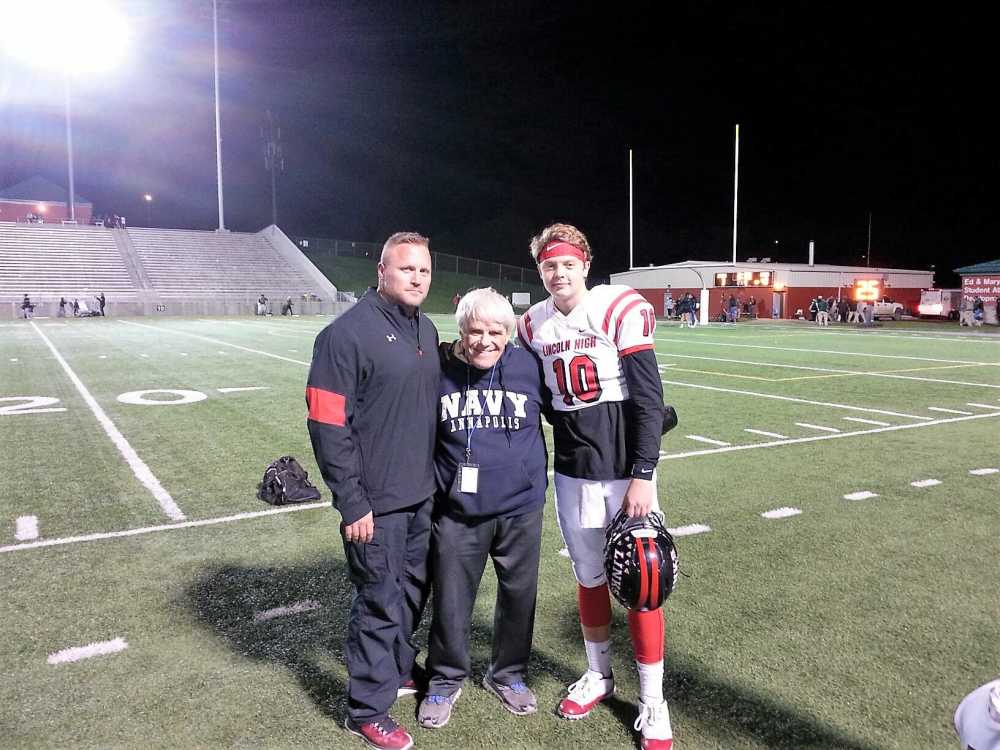 Lincoln High record setting QB Cedric Case (R) and Dad, Coach Chad Case (L) will lead the 7-2 Links in their quest for a Class A State Championship. The 11-Man and 6-Man playoffs begin this Friday. *(photo by Bobby Mills)

*Cedric Case, Isaiah Alford, Jaden Horton -Lincoln High - This football team made me dizzy last Friday night in their 43-3 win over a good Lincoln Southwest squad. Super-State QB Cedric Case completed 18 of 23 passes for 292 yards and 3 TDs and looks like he could throw a football through an 80 yard car wash without getting the ball wet and hit a target right smack dab in the heart at the end. I’m at loss for words to describe it. For the year, Cedric has hit 73% of his 246 passes for 2,522 yards, 24 TDs with just 5 INTs. And if you think this lad may be one of the most deadly accurate quarterbacks in Nebraska prep football history, you are probably correct.

Case has thrown 735 passes in his 29 game career, hit 70 percent of them for 7,651 yards with 78 TDs and just 14 picks. If Cedric Case maintains this .700 completion rate, he will be the most accurate 11-Man quarterback on record in Nebraska prep football history. Aurora’s Tyson Broekemeier is the 11-Man record holder with a .691 mark, set during his 2007-2010 career with the Class B Huskies.

Isaiah Alford, one of the state’s top wrestlers, ran for 131 yards on 23 totes and a 12 yard score and hopped through the defensive line like a hybrid kangaroo, appearing to be nearly impossible to tackle by one player. The dude looks like a pinball bouncing off rubber bumpers (defenders) at blinding speed. He has 1,309 yards rushing with 22 TDs right now.

WR Jaden Horton finished the Southwest game with 7 catches for 102 yards and TD grabs of 23 and 22 yards. Horton, one of many Lincoln High weapons, has 38 receptions for 787 yards and 9 TDs this season.

*Austin Jablonski - Lincoln Pius X - Fabulous senior quarterback completed 12 of 20 passes for 146 yards and 6 TDs to 6 different receivers in the Thunderbolts 55-14 regular season ending win over Omaha South. Jablonski, who also ran for 48 yards on 8 carries for the Class A playoff bound Pius X, found sophomore Blake Vodicka for a 33 yard scoring strike, CJ Miller for a 16 yarder, Caleb Hruby for a 15 yard TD, Nick Staab for 7 yards, Dominic Pelan with a 6 yard strike and Noah Unger, who hauled in a 5 yard scoring catch.

Austin Jablonski enters the playoffs with 1,651 passing yards, 20 touchdowns and only 3 INTs. The 6-2, 200 pound senior can run too, compiling 545 yards and 8 TDs this season. So, expect Austin to throw about 24 times a game in the playoff(s), complete 14 of ‘em and hit the 183 yard mark with a couple of scoring passes. Tough guy to stop.

Pius X (5-4) opens the Class A playoffs this Friday with a trip to Buell Stadium and a date with 8-1 Millard South.

You may recall these two teams met back on August 31st when Millard South pulled out a 42-39 win over the Bolts. You may also remember Austin Jablonski hitting 19 of 30 passes for 291 yards and 4 TDs in that contest.

Blair QB Stewart Cemer hooked up with Quincy Nichols for scoring passes that covered 24, 5 and 35 yards. Cemer ended up completing 16 of 26 passes for 173 yards and 3 touchdowns (3 INTs), while Nichols had 10 catches for 125 big ones in the loss. Nichols by the way, is one of Class B’s finest receivers, having already caught 47 balls for 719 yards and 11 TDs during the regular season. The 5-7, 150 pound Blair WR is at 1,628 yards and 23 TDs for his career. Pretty impressive numbers.

6-3 Blair opens up the Class B playoffs by hosting 5-4 Grand Island Northwest this Friday.

It was a special night for the Falcons 6’-5” quarterback. Ty Eggen became the first player in Douglas County West history to rush for over 1000 yards in a season. Douglas County West came into existence in 2005, combining Waterloo and Valley igh schools.

Ty finished the year with 1,083 yards and 15 touchdowns and also completed 58% of his throws for 360 yards, plus making 58 stops on defense with 3 recovered fumbles.

That puts Joseph’s 2018 passing yards at 2,863 yards, 34 TDs, with 1 interception. He also reset his Career Total Yards Record, which now stands at 7,508 yards. Seward (7-2) opens post-season play this Friday with a home game (at Concordia University) against Norris (5-4)

*Carter Terry - Northwest (Grand Island) - The record setting Northwest quarterback and Seward’s Joseph Krause remain in a heated battle for the Class B Career Total Yards record. Krause has 7,508 yards, with Carter Terry close in Joseph’s rear view with an unofficial 7,446. But, I can almost guarantee both are most focused on making a deep playoff run.

Terry closed out the regular season with a 24 for 32 passing night, good for a 414 yards and 4 touchdown game in the Vikings 48-24 win over Crete. Carter’s scoring passes were caught by Adam Korte (4, 38 yards), Sean Juengst (37 yards) and a 3 yarder by Justin Hiser.

Northwest (5-4) will begin the playoff season by traveling to Blair to take on the 6-3 Bears this Friday.

*Christian Timm - Eustis-Farnam - The state’s rushing leader, regardless of class, closed out the 2018 Six-Man season by bolting for 379 yards on 16 carries and 6 TDs in the Knights 70-32 win over an improved SEM team. That gives Timm 2,685 yards and 50 touchdowns in 8 games this Fall. Eustis-Farnam (6-2) qualified for the 6-Man playoffs this season and will travel to 6-2 Spalding Academy Friday in a game that could see up to 140 points scored. And remember, they play only 10 minute quarters in 6-Man ball.

*Tramar Byron - Lincoln Southeast - 6-1, 290 pound lineman intercepted a Lincoln NE pass and rambled 82 yards for a Pick-Six in the Knights 28-14 win over Lincoln NE last Friday afternoon. This qualifies as one of my Plays-of-the-Year for sure. You had to see Tramar blazing down the Seacrest Field turf to appreciate it. I believe recalling that Mr. Byron sat out the Knights next defensive series.

Grand Island Islander Defense - Put the clamps on the Lincoln East offense to the tune of 137 total yards in GI’s 24-3 victory over the Spartans. Rugged junior Caleb Francl led the charge with 9 tackles (2.5 for losses) and a key interception. Al-State candidate Sam Sims (1.5 sacks) and junior Jordan Hofeldt (1 sack) each added 8 stops.

Grand Island (7-2) will enter the Class A playoff field as the #7 seed and have been awarded a home game with familiar playoff foe, Omaha North, who finished with a 6-3 mark.

*Jacob Frenzen - Columbus Lakeview - Rushed for 126 yards on just 13 carries in the Vikings 48-0 route of Raymond Central. The rugged Lakeview standout scored touchdowns on runs of 43, 13 and 3 yards in what turned out to be his final game of the season and career. Lakeview just missed the Class C-1 playoffs despite being 15th in the wild card standings.

Jacob Frenzen was a standout on both offense and defense during his career at Columbus Lakeview. He had a good teacher.

Southern, who played 11-Man football prior to 2018 because of a co-op with Lewiston, dropped to the 8-Man ranks when the Tigers decided to field a 6-Man team of their own this year. Southern qualifies as the 16th seed in the Class D-1 East bracket and faces a tough road game at #1 seed and unbeaten Creighton this Thursday.