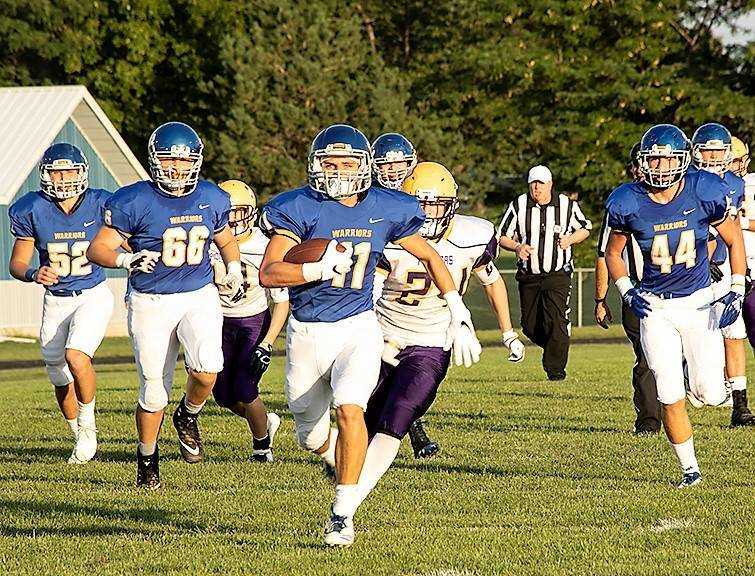 *Trevin Luben - Wahoo - 6-0, 175 pound junior RB powered his way to 226 yards on 31 carries and 2 touchdowns in the Warriors 21-7 win over a good Columbus Lakeview team. Luben escaped for 3rd quarter TD runs of 41 and 57 yards within five minutes and 39 seconds of each other, giving Wahoo the cushion they needed.

That gives Trev 1,304 yards (21 TDs) for the season and the guy didn’t even play in the Warriors season opener against Wayne. That’s averaging 186.3 yards every time he slips on the pads, and coming into the 2018 season, one had to be concerned about replacing the great Dylan Egr. No problem for Luben, and the nice thing about it? He will be back next year for Coach Chad Fox and the Warriors.

This young man has uncanny instincts that enable him to plant and cut in the blink of an eye, and I’m talking about immediately after receiving the handoff. It’s almost like quick little explosions, one after another, until he gets to the second level. Then the fun really begins.

Luben loves to cut back against the grain, taking a mini step backwards, then weaving to the next defender, then repeating the process. Don’t get me wrong, there’s not a vast waste of space here because #11 is always looking for the shortest route to the goal line, but if that direct route does not exist, Trev has the instantaneous reflexes to find a roundabout way to score. This dude is really special.

*New Class B Total Yards in a Career Record*

The incomparable Joseph Krause has now hit 64% of his 236 passes in 2018 for 2,498 yards and 30 TDs, with only one lonely interception coming in the Hastings game.

For Joseph Krause’s illustrious 28 game career…..6,317 yards and 64 touchdowns. **But the big one is the new Class B record for Total Yards in a Career. Krause’s total of 7,137 yards either eclipses the old record of 6,839 total yards, set by Grand Island Northwest QB Christian Ellsworth (2013-2015).............OR…IF…Grand Island Northwest’s win over Crete ended BEFORE Seward and York concluded, Krause’s total would break Carter Terry’s record of 7,032 which would have been set minutes before the Seward-York game concluded. WOW!

*Nolan Hartman, Caden Kozisek - Aquinas Catholic - Monarch QB Hartman ran in a pair of touchdowns from 1 and 8 yards out and also completed 7 of 12 passes for 114 yards, which included a 34 yard scoring strike to Kyle Napier in the Monarchs 54-22 win over Twin River . Caden Kozisek scored scored twice, one on a 3 run, the other coming on a sweet 75 yard punt return with 9:24 left in the 2nd quarter. That put Aquinas up 36-0 at the time.

I might also point out that Kyle Napier punted twice in the contest, averaging 41.5 yards per boot. Think that might come in handy in the playoffs? That’ a big time per punt average.

*Isaiah Harris, TJ Urban - Millard South - Harris ran 23 times for 142 yards and two touchdowns in the Patriots 38-30 win over Papillion La Vista. The 5-7, 160 pound senior scored on a 24 yard run and also caught a 33 yard scoring pass from TJ Urban. The 142 yards sends Isaiah Harris over the one thousand yard rushing mark for the year. I unofficially have Isaiah at 1,043 yards after 8 games.

In that Papio win, sophomore quarterback TJ Urban was a Dual-Threat nightmare for the Monarchs, rushing for 96 yards on 17 touches, plus completing 11 of 17 passes for 121 yards and and a pair of touchdowns. Besides the 33 yard scoring toss to Harris, Urban nailed Isaiah Wise for a 15 yard scoring strike.

*James Burks, Nick Henrich, Gio Manor, Jaylon Rousselle - Omaha Burke - Yet another 1000 yard rusher in the Class A ranks. In the Bulldogs 38-9 win over Millard North, James Burks toted the football 20 times for 146 yards and a couple of TDs, giving him 1,144 yards and 16 TDs for the season and 3,486 yards and 50 TDs in his career. Burks also made 4 tackles on defense, one being a sack for a loss of 5 yards.

Jaylon Rousselle also went over the hundred yard rushing mark with his 112 yards on 13 carries and a TD. Jaylon has 599 yards this season to augment those James Burks yards.

Nick Henrich was the usual monster for that Bulldog “D”, making 8 tackles and blocking a Millard North punt. Gio Manor added 4 stops, 3 of which were for losses.

*Cody Carlson - Fremont - One hundred forty pound waterbug-like runner squirted through the Gretna defense for 166 yards on 31 carries and scored the only Tigers touchdown (1 yard run) in a 38-6 loss to the Dragons. That lifts the TigerTown tough guy over the coveted 1000 yard mark with 1,136 yards and 13 TDs for a 2-7 Fremont team.

You have to see this lad play to appreciate his efforts. It takes a ton of courage, dedication to the weight room, and pure guts to weigh 140 pounds and carry the ball in the Big Boy Class A ranks, let alone gain a 1000 yards. Big time props to Cody Carlson. You are a man.

*Rhett Jordan - Waverly - Was nearly perfect in the passing department again, in the Vikings 35-0 win over Plattsmouth. Jordan hit 7 of his 8 pass attempts for 225 yards and 2 TDs, averaging 32 yards a completion. Rhett’s scoring throws were hauled in by Jay Adams (46 yards) and Evan Canoyer (81 yards). The Waverly QB also rushed 4 times for 36 yards and a score, made 4 stops on defense and intercepted a pass for the 7-2 Vikings.

Rhett Jordan has now rushed for 851 yards and 9 touchdowns in 8 games and passed for another 940 yards and 13 TDs. Can you say Dual-Threat Quarterback?

*Blake Ingamells - Lincoln East - Can’t come up much bigger than the 5-9, 170 senior did in the Spartans 21-13 upset of then #3 Millard West. Trailing 13-7 with 1:49 left in the game, Lincoln East quarterback Devin Beckner hit Connor Rickenberg with a pass 8 yards downfield. Rickenberg then pitched the ball to Ingamells, who sprinted the remaining 34 yards for the go-ahead score. Oh….it gets better.

Ingamells then intercepted a Millard West pass on the Wildcats next possession, nearly returning it for a Pick Six. AJ Muthersbaugh then put the game away with a 13 yard touchdown run with 49 seconds left in the contest. Blake Ingamells wasn’t finished yet. Adding insult to injury, the Spartan senior then picked off another Tristan Gomes pass to kill any chances of a miracle finish by the Cats.

*Jack Goering, Isaac Herbek, Dietrick Stolz - Grand Island Central Catholic - QB Goering completed 21 of 34 passes for a fat 291 yards and 3 touchdowns in the Crusaders 30-18 win over Gibbon. Isaac Herbek, only a freshman, caught 9 passes for 209 yards including TD receptions of 94 and 7 yards. Young Herbek also hauled in a 50 yard aerial from Goering that nearly went for another score.

Dietrick Stolz, the state’s top place kicker regardless of class, was a perfect 3 of 3 on PATs in the game and also booted a 31 yard field goal, giving GICC their 1st lead of the game.

Jack Goering has now completed 56% of his 242 passes for 1,875 yards and 15 TDs. Herbek has 27 receptions on the season, good for 670 yards and 6 scores. Dietrick Stolz, who leads the state in kick scoring, booting 28 of 30 PATS and converting 10 of 13 field goal attempts. Dietrick has a pair of 42 yarders, a 44 yard bullseye in there and his longest of the year, a 47 yard beauty to top things off.

The St. Paul sensation also has 7 pass receptions for 143 yards and two more scores, has made 40 tackles on defense and recovered a fumble. Larson is also a very dangerous kick return man, accumulating 378 yards on 11 returns, one of which was a shocking 90 yard KR touchdown against powerful Norfolk Catholic.

*Jake Twogood - Nebraska Christian - 175 pound senior carried the load in the Eagles 40-12 win over a solid Ravenna football team. Twogood carried the ball 35 times for 248 yards and 3 touchdowns. That gives Jake 901 yards for the season (14 TDs), as the 7-0 and 10th rated (Class D-1) Eagles head into their regular season finale at home versus Palmer this Friday.