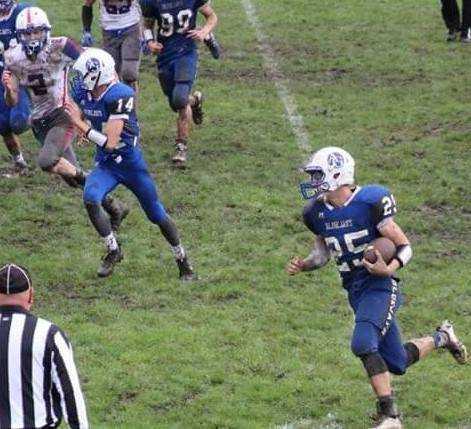 QB Hunter Washburn, another member of the Bluejays talented junior class, has been on target with half of his 102 passes, good for 757 yards and 9 TDs. On the defensive side, junior Jacob Ludwig is a bonafide All-State candidate from his defensive end position. The 6-1, 210 pound Ludwig has made 73 tackles in 7 games, 15 have been for losses, 5 were QB sacks.

This aggressive Ashland-Greenwood “D” has pirated 8 passes, blocked 3 punts, blocked a field goal, and not only forced 10 fumbles, but came up with 10 recoveries.

We’re getting closer to the not so distant glory days of Ashland-Greenwood football that produced all the Kitrell boys, Ben Stille, Trevor Nichelson and the list goes on. The Bluejays are currently 6-1, with their only setback coming from Auburn (19-7).

Jorgensen kicked the game winning, 33 yard field goal with just 38 seconds left, giving the Silver Hawks a 17-15 important district win over Kearney. Wynn ran for 154 yards on 29 carries and 2 TDs, while the punishing McCormack chipped in 80 yards on 14 carries to provide the ground attack for Southwest.

Easton Boyd led the Southwest “D” with 17 tackles, Caden McCormack followed with 15 stops and Nebraska bound Nick Leaders recorded 3 tackles for losses (1 sack) in the win. Jorgensen also booted all four of his kickoffs into the endzone for touchbacks.

*Dylan Mettler, Battle Creek Defense - Held Norfolk Catholic to 64 total rushing yards in a 21-7 loss to the Knights. The great Dylan Kautz was held to 54 yards in 23 tries, while Evan Smith could muster 10 yards on 9 carries. Leading the way for that Battle Creek “D” was 5-10, 175 pound junior Dylan Mettler. #32 just has a knack of being everywhere on defense, don’t cha know.

In the loss to Catholic, Mettler made 12 tackles and pirated a Cayden Cunningham pass, as the Braves defense held the Knights to 21 points. Dylan’s junior classmate, Slate Kraft wasn’t far behind with 10 tackles (7 solos).

This is a good defense, despite Battle Creek being 4-3 right now. The Braves other losses were to Class C-2, #1 Centennial and a forgivable season opening 29-14 loss to Shelby-Rising City. The Braves have improved since that night for sure.

Tackling leaders include Dylan Mettler with 55 stops, a sack and 2 interceptions. He is also the leading rusher for the Braves with 540 yards/5 TDs. Slate Kraft (34 tackles) heads a cluster of players behind Mettler, with Buddy Walz, another junior and Caydon McCracken logging 33 stops apiece. Senior Parker Pokorney and junior Luke Stueve are close behind with 32 tackles each.

This football team will be a force to be reckoned with in the Class C-2 playoffs.

*Tyler Chadwick, Nick Henrich - Omaha Burke - Chadwick didn’t have to work up much of a sweat in the Bulldogs 42-7 win over Fremont. The masterful senior field general completed 9 of 13 throws for 206 yards and 4 touchdowns in the win. That’s neary 23 yards a completion. Tyler connected with five different receivers in the game and hit four different players with scoring passes.

And Nick Henrich…..just another day at the “pain inflicting office” with 14 tackles and a sack against the Tigers. That gives the Husker commit 42 solo stops, 42 assists, 6 tackles for losses and 4 sacks through seven games…..and...they all hurt.

*Lane Edis - Mullen - Senior 3 time 1000 yard rusher accounted for all of Mullen’s points in the Broncos 46-28 come from behind win over rival Sandhills-Thedford. Edis, a 5,000 yard career rusher, ran the football 29 times for 214 yards, 6 TDs and caught 2 pass for 31 yards and a score, and ran in a pair of single point PATs.

Class D-2, #1 rated Mullen (6-0) was down to Sandhills-Thedford, who was undefeated entering the contest, 28-18 at one point in the 3rd quarter, and 28-24 at the end of three. Edis provided the 4th quarter spark with his one yard TD run, then a 12 yard touchdown reception from QB Brady Gracey, and finally the clinching score on a 2 yard dash. Lane’s other 4 TD runs came from 12, 26, 54, and 6 yards away.

*Chandler Cotton - Papillion LaVista South - Swift, 5-10, 195 pound senior had a career night in the Titans 50-0 blanking of Bellevue East. Cotton exploded for 308 yards on just 11 carries and 5 touchdowns in the route. In case you were wondering, that’s averaging 28 yards a pop.

The speed burning Chandler made every carry count in that Bellevue East game, ripping of touchdown jaunts of 26, 80, 23, 45, and 83 yards. Cotton also had 36 yard run that nearly went for a score and a 33 yard pass reception where the last defensive man made a touchdown saving tackle.

*Ben Weindel - Millard North - FRESHMAN started at quarterback for Freddy Petito’s Mustangs and guided his team to a 17-16 overtime win over Papillion LV. Weindel ran like a Millard North QB should, gaining 133 yards on 24 carries with a 7 yard TD run. He also completed both passes he attempted, one of which was hauled in for a game winning, overtime, 9 yard touchdown by Noah Knoell. That actually tied the game, but Mustang place kicker Miles Whitaker’s PAT kick gave Millard North the victory.

Meanwhile, on the other side of the ball, the Millard North defense was limiting Papio to 171 total offensive yards for the game.

Omaha World-Herald prep football specialist and historian extraordinaire, Stu Pospisil reported that the last freshman to start a Class A game in 14 years, when Papillion LV South 9th grader Anthony Dunn took the reins and surprisingly threw for over a thousand yards for a 1-7 Titan squad in 2004.

*Cayden McCormick - Norfolk Catholic - Sophomore quarterback stepped up big time in the Knights 21-7 win over physical Battle Creek. McCormick, who had to step in when junior starter Nate Brungardt went down with an injury earlier in the season, had to figure something out to make the passing game work when Battle Creek stuffed Catholic’s rushing attack to tune of 64 total yards.

No, Cayden McCormick didn’t throw 30 passes in the game, but he did fire 8 of them and completed 5 with a trio of those going for touchdowns. Ryan Vetter was on the receiving end of two of those scoring passes, a 5 yarder in the 1st quarter, and a 10 yard strike in the 3rd.

The touchdown pass that proved to be the clincher certainly had to be the 69 yard bomb to Jack Marsden with 8:28 left in the 4th stanza. That paralyzer gave the Knights a 21-0 lead, and things were then turned over to the defense and 6-4, 285 pound Ethan “You call him Sir” Piper.

*Blake Steinke - Grand Island Central Catholic - Hard running 170 pound senior rushed for 129 yards on 14 carries and touchdown runs of 42 and 20 yards in the resurgent Crusaders 43-6 win over Wood River. GICC, who was winless a year ago, improved to 4-3 on the 2018 season and are in the hunt to qualify for a playoff spot in Class C-2.

Outstanding job buy Head Coach and former GICC player, Tim Dvorak for getting these players to buy into the revitalized football program.

That gives Trent Reed 1,133 yards rushing and 18 touchdowns in 6 games for undefeated and 4th rated Hay Springs Hawks. Trent has also completed 9 of 15 passes for 285 yards and 5 TDs with only one INT this season.

Throw in 215 tackles, 7 pass INTs and a recovered fumble on defense, and you have an easy three-time All-State selection in the 6-Man ranks.