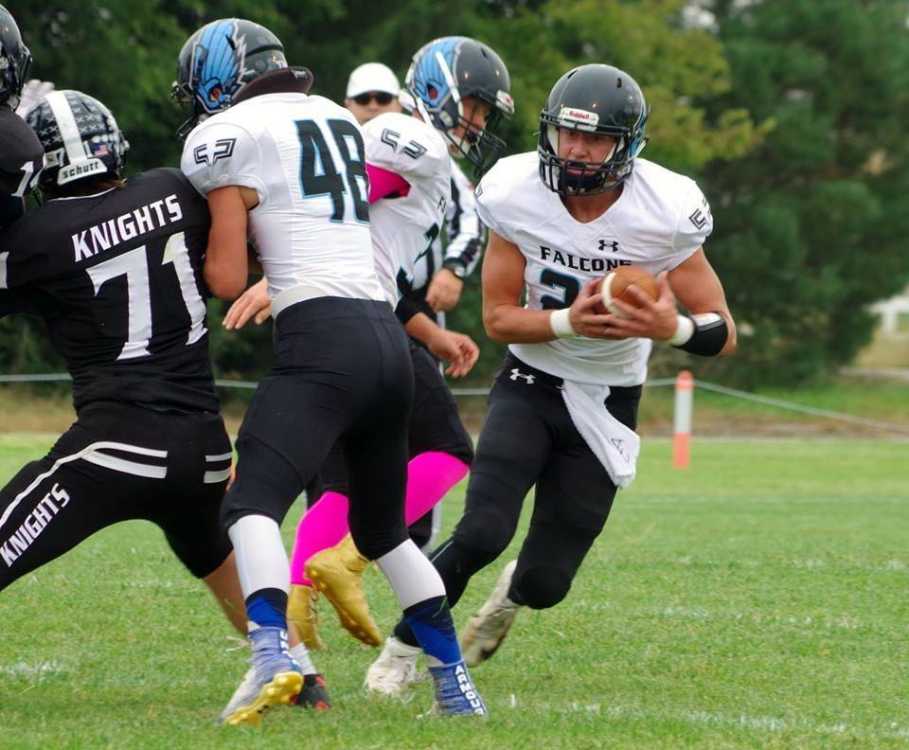 Wilcox-Hildreth running back AJ Jenkins (White/with football) became only the 6th back in Nebraska prep football history to rush for over a 1000 yards in 4 consecutive seasons. *(photo courtesy of Wilcox-Hildreth football)

It has been rare in my 50 plus years of following Nebraska high school football, to be able to break the news of a running back breaking the 1000 yard rushing plateau for the 4th time in his career. So rare, that only Six runners have ever turned the trick.

It takes a combination supreme talent, an outstanding offensive line, and some good fortune health wise, to pull it off. I’ve been fortunate to write about two such athletes in the past two years, and now a third.

Here is a list, an exclusive one at that, of Nebraska prep running backs who have gained over a thousand yards rushing all four years in high school.

There have been 7 freshman who have eclipsed the 1000 yard rushing mark in history and they obviously include the above gentlemen. The first ever freshman to perform this feat was Callaway’s Casey Cozad, back in 1995. Cozad would go on to reach the 1000 yard rushing mark in his junior and senior seasons, but an injury during his sophomore campaign, forcing to miss a few games, prevented him from reaching the mark in 1996.

And now we lead off Week 7 with our Man-of-the-Hour, AJ Jenkins of Wilcox-Hildreth.

*AJ Jenkins - Wilcox-Hildreth - 6-0, 180 senior erupted for 447 yards on 29 carries and 6 touchdowns in the Falcons 92-46 victory over Eustis-Farnam. The three time All-State, 6-Man selection not only cracked the 1000 yard rushing barrier for the 4th consecutive season, but the 447 yards also lifted AJ over the 5,000 yard career rushing mark.

In a 4-year career for the Wilcox-Hildreth, that spanned only 28 games, AJ Jenkins has toted the ball 513 times for 5,155 yards and 78 rushing TDs. The hard-nosed Wilcox-Hildreth product also has 49 pass receptions for 534 yards/8 touchdowns. He’s also returned 3 fumbles for TDs (all this season), returned a punt for a score and brought back 4 kickoffs for touchdowns in his career.

Jenkins has also completed half of his 52 passes for 425 yards and 5 more TDs in those 28 games. When you add all of AJ Jenkins yards together, it totals 6,466 yards and 94 TDs.

In case you are not familiar with the game of 6-Man football, there are cardinal rules you must follow to be successful; 1) Be in excellent physical condition, 2) Be able to make open field tackles 100% of the time, and 3) Be a jack-of-all on both sides of the ball, since every player on offense is an eligible rusher pass receiver, or pass thrower.

Wilcox-Hildreth (6-0) currently is rated #2 in Stu Pospisil’s state 6-Man ratings, right behind #1 Harvard. AJ Jenkins has never had the luxury of playing in a playoff game...not one. The Falcons last time in the postseason was 2004 and that was 8-Man.

I’m betting that this young man would take a State 6-Man Championship over all the accolades he’s compiled the past 4 seasons. Stay tuned.

*Tristan Gomes, Dalys Beanum - Millard West - With the Wildcats missing their leading rusher Jackson Wright, who was serving one game suspension due to an ejection the week before, it was time for QB Tristan Gomes and RB/WR Dalys Beanum to do their things against #3 Grand Island.

Gomes proceeded to complete 22 of 36 passes for 259 yards and 2 TDs and rush for another 49 yards on 11 carries and two additional scores in the ‘Cats electric 30-24 double overtime win over the Islanders. Dalys Beanum, just a junior, not only caught 10 Gomes aerials for 107 yards, but also intercepted two Grand Island passes, one a critical pick in the end zone to thwart an Islander threat in the 2nd overtime period.

Tristan Gomes then scored the winning touchdown on Millard West’s 2nd overtime possession from 10 yards out, giving the Wildcats the huge victory. By the way, the winning 10 yard rush by Gomes was the Wildcats longest run of the wet night.

*Trev Luben - Wahoo - Exploded for 232 yards on a grueling 41 carries in the Warriors important 14-12 win over crosstown rival Bishop Neumann. The junior star scored both Wahoo touchdowns in the game, as the Warriors turned to their “Hammer Set” to grind out the tough yards. That Hammer set puts All-State LB Sam Kolterman at a Fullback type position with Trev Luben lined up right behind. Good luck stopping that one.

*Jarod Epperson - Omaha Skutt - Waverly must have messed with Epperson’s pride in the first half because the SkyHawk speed machine bolted for 143 second half yards, enroute to a 30-14 Skutt victory. Epperson ended the night with 205 yards and TD jaunts of 16 and 60 yards in the “W”.

The 205 yards elevates Jarod over the one thousand yard rushing mark for the season, giving him 1,092 big ones as we speak. The 7-0 SkyHawks are still listed as #1 in Class B in the current, hot off the press, Omaha World-Herald ratings.

*Jacob Frenzen, Lucas Thatcher - Columbus Lakeview - Vikings rebounded from a 44-22 loss to #1 Pierce to take a 24-14 win over crosstown rival Columbus Scotus. Frenzen, the hard running senor fullback, rushed for 155 yards and a 10 yard TD, while speedy RB Thatcher added 82 more yards on the ground for Lakeview, now 5-2 on the season.

Connor has a pair of regular season games against Waverly and Omaha Gross to reach the 1000 yard rushing mark in 2018.

*Dex Larsen - Blair - Big 5-9, 195 pound sophomore punished Elkhorn Mt. Michael with his 159 yards on 32 carries, as the Bears notch win number five in the 28-12 victory. That is the 4th hundred yard rushing game of the season for Larsen, who has 746 yards and 9 touchdowns in 7 games for Class B #8 rated Blair. Dex also has 30 tackles on defense, 6 of those for losses.

*Jesse Thomsen - Arlington - Sophomore cut loose for 122 yards on 18 carries and a 65 yard scoring jaunt in the Eagles 20-6 win over Boys Town. That performance by Jesse Thomsen is his third straight game over a hundred yards rushing and Arlington’s 3rd win in a row. I see a trend here. Thomsen is now up to 435 yards after gaining only 60 yards in his first 4 outings of 2018.

*Caleb Bergst, Colby Bliss - Lincoln Lutheran - Talk about being a clutch player, how about the Warriors Colby Bliss? The 5-7, 145 pound Bliss engineered a 4 play, 80 yard, game winning drive, operating out of the Wildcat formation after QB Caleb Bergst was shelved with an injury in the opening half of the Auburn game..

Bliss dashed 20 yards for what proved to be the game winning touchdown with 6:13 left on the clock, to pull the 19-16 upset over then rated #6 Auburn (C-1). Caleb Bergst had already given Lutheran a 13-0 halftime lead with his touchdown runs of 11 and 4 yards before departing with that injury.

It was then time for the heroics of one Colby Bliss, who ended the night with 96 yards on 21 carries. Lincoln Lutheran, now 5-2, jumps into the Class C-1 ratings this week at #8. The Warriors, who have now lost Two starting QBs in this fall, are a team that just rolls with the punches and leans on players like Bliss, who had more receiving yards than rushing yards coming into this Auburn game.

*Baily Darnell - Auburn - Despite being held to 49 yards on 16 carries and no TDs in that 19-16 loss to Lincoln Lutheran, the Auburn senior still eased over the 1000 yard mark for the second straight season. He also was a force on defense, making 11 tackles. Darnell, one of Class C-1’s best runners, has 1,024 yards and 13 TDs for the 6-1 Bulldogs, who suffered their first loss of the year.

*Drew Dixon - Auburn - While Lincoln Lutheran was putting the clamps on Baily Darnell, the Auburn quarterback picked the ground game sack by rushing for a giant 186 yards on 23 carries and both Bulldog TDs.

The new trio of three schools into one team, is currently 6-0 and rated #5 in 8-Man One.

*Grant Burbach - Malcolm - The Clippers and beat up on Conestoga 46-6 last Friday and apparently decided to give Burbach some carries. In 6 previous games this fall,

*Lucien Ruby - St. Edward - You know what man, it doesn’t get much better than this. Ruby, the 150 pound senior on a 10 member, Six-Man football team, ran for 176 yards on 10 totes and three TDs in the Beavers 58-12 win over Santee. That gives Ruby, who has been held under 100 yards rushing only in the opening loss to Sterling, now has gained 1,003 yards and 17 touchdowns for the season. Bravo.

(*An interesting side note in that Millard West/Grand Island game write-up……..The Digital Scout statistical site lists Grand Island’s school nickname as none other than the…….”Palm Trees.”