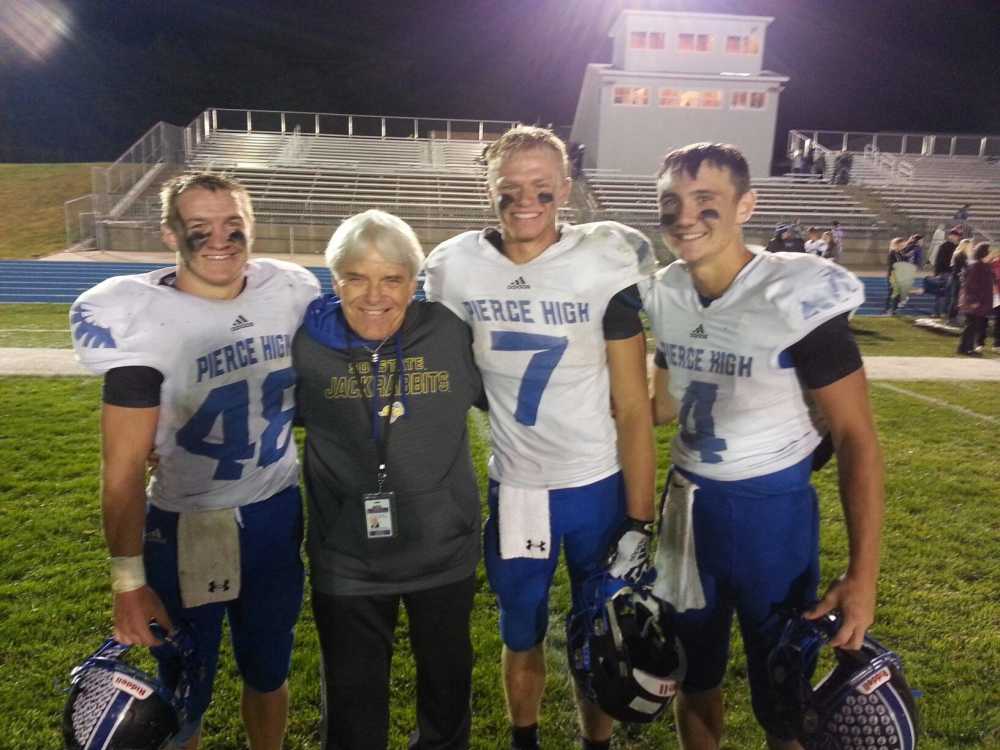 The thing that makes this offense so unique at the high school level, is the unbelievable depth Pierce has at the offensive guard and tackle positions. In my 50+ years of watching high school football, I cannot recall seeing very many teams that could go 4 deep at those guard and tackle slots. The exception would be Mark Wortman’s Elkhorn teams back in the day, who would alternate a complete offensive unit every other possession.

Last Friday when the Bluejays handled a fine Columbus Lakeview team 42-22, Coach Brahmer had his 2nd offensive guard/tackle rotation in by Pierce’s second possession of the game. And these players sub in so quickly the defense has trouble keeping track of those guys coming on and off the field. Adding to that task is the fact Brahmer has that offensive unit running at a frenetic pace and calling coded play names that some colleges might have trouble remembering……….but the Pierce kids know them and make very few mistakes.

Unfortunately, Colby Richart, a starting tackle whom I consider a Division One prospect, did not play due to an unfortunate ACL injury suffered in the rugged Wayne game. I think Richart may be undergoing surgery this week.

How did this unit become so tight and continuously run so smoothly? I’m told on a normal practice session, the offense will run a hundred plays in an hour’s time. And you know something else? We haven’t even touched on the defensive unit yet.

*Trev Luben, Collin Ludvik, Sam Kolterman - Wahoo - Quite a few Wahoo players got into the act last Friday when the Warriors drubbed Raymond Central 75-6. Trev Luben ran for 110 yards on 12 carries and 3 touchdowns (1, 9, and 5 yards). Collin Ludvik, a 5-6, 145 pound freshman, scooted for 122 yards on only 7 touches and that included touchdown runs of 53 and 40 yards.

Rugged, All-State Sam Kolterman made a couple of special teams plays that left the big lineman smiling from ear to ear. Kolterman returned a short 21 yards punt for a score, then later threw a 57 yard touchdown pass to Cooper Hancock on a fake punt.

Trevin Luben is up to 843 yards rushing (16 TDs) for the season as the Class C-1, 3rd rated Warriors head into a critical District matchup with rival Bishop Neumann this Friday.

Keep in mind that Josh Bailey plays for a football team that has gone 6 and 18 the past three seasons.

*Rhett Jordan, Noah Stoddard, Viking “D” - Jordan was 6 for 12 in the passing department, for 153 yards and a pair of TD strikes in a 42-0 win over Omaha Gross. Jay Adams (4 catches/126 yards) ran under a perfectly thrown Jordan pass for a 77 yard touchdown. The remaining aerial TD was caught by Trent Weatherwax and covered 16 yards. Noah Stoddard got in on the special teams fun, returning a punt 85 yards down the Vikings sidelines. Not a single Gross defender came close to laying a hand on Noah on that punt return..

The Waverly defense held Gross to 195 yards of total offense and recorded 7 tackles for losses in the game. The 5-1 Vikings are currently rated #5 in Class B and face a rugged test when they travel to #1 Omaha Skutt Friday.

*Garrett Snodgrass, Brady Danielson - York - Husker commit Garrett Snodgrass ran for 134 yards on 19 carries and 3 touchdowns in the Dukes 42-21 win over a pretty good Hastings football team.. He also completed 10 of 15 passes for another 120 yards and a pair of scoring passes to the acrobatic Brady Danielson. Reid Hoffman and Jeb Lucas both had interceptions in the game.

Sophomore quarterback Prestyn Rogers rushed for 71 yards on 12 totes, passed for another 33 yards including a 10 yard TD pass to senior Tucker Quinn. The rugged Quinn also made 20 tackles on defense (10 solos), but Rogers really pulled off a rare feat by intercepting 3 passes in the contest (school record?). Junior Jadyn Scott also pirated a Ansley-Litchfield pass.

*Owen Geiken - Gothenburg - Sensational sophomore RB escaped for 160 yards on 21 carries and 4 touchdowns in the Swedes 35-21 win over Broken Bow. Geiken’s scoring runs came from 3, 17, 2 and 44 yards away, as Gothenburg improved to 5-1 and remain #10 in the recent Omaha World-Herald Class C-1 ratings by Stu Pospisil.

Geiken and Stapleton/McPherson County transfer Trenton Harbur lead the Swedes rushing attack with 529 and 599 yards respectively. I also think Owen Geiken is a D-1 prospect at the linebacker position.

*Tyler Palmer - Columbus Scotus - Converted QB, now RB, scored a pair of 1st half touchdowns covering 1 and 4 yards, to lift the Shamrocks to a 21-19 win over #3 (C-1) Wahoo Neumann. The 6-1, 165 pound junior, already with two all-district awards in his hip pocket, keyed yet another Scotus victory and put the ‘Rocks right back in the thick of the C-1, District 4 race with a 2-0 record.

*Zander Gray - Omaha North - Returned from concussion protocol to rush for 197 yards on 23 carries and 3 touchdowns (12, 1, 64 yards) in the Vikings big 49-13 win over Papillion LV South. Chris Ramsey also jolted the Titans with a lethal 96 yard Pick 6. Ramsey and his defensive cohorts did a stellar job holding Papio South to 224 yards of total offense for the night.

*Michael Rutherford, Christian Coleman - Central City - QB Rutherford completed 16 of 29 throws for 231 yards and 3 touchdown passes in the Bison come-from-behind 45-25 win over GICC. The Central City QB also rushed 18 times for 57 yards and scored a pair of TDs on runs of 15 and 6 yards.

Coleman, the 5-10, 155 pound junior, took the game rushing honors with his 130 big ones on 16 touches. Christian hit paydirt with a 20 yard scamper in the opening quarter, then caught an 11 yard scoring pass from Rutherford with 2:29 left in the 2nd stanza, part of his 4 receptions for 42 yards evening.

Hahn also ran for two touchdowns that covered 2 and 25 yards for 5-0 Johnson-Brock. Do we have to remind you that Johnson-Brock hosts Falls City Sacred Heart the last regular season game of the year on Thursday, October 18th?

*Cadet Defense, Blake Anderson - West Point-Beemer - The All-State linebacker Anderson can apparently run the football too. In the Cadets 14-0 win over Boone Central/Newman Grove, Blake toted the ball 29 times for 155 yards. Gage Vance aided the cause by adding 75 yards on 5 carries and a 60 yard touchdown dash.

The rock solid Cadet Defense held the Cardinals to just 109 total yards with a miniscule 5 first downs in the game. Anderson led the defensive charge with 6 solo stops. The 5-1 Cadets, with only a 36-0 loss to Wahoo on their record, will travel to Wayne Friday, then return home to face powerful Pierce on October 12th.

*Taylor Pulver, John Schuster - Kenesaw - Duo teamed up for 273 yards rushing in the Blue Devils very impressive 60-12 win over a fine Lawrence-Nelson team. Pulver escaped for 144 yards on 18 carries (3 TDs), with Schuster not far off the pace with 129 yards on 20 rushes and two scores.

Kenesaw (5-0) remains the #9 rated team in 8-Man One with games against Franklin, Blue Hill and Giltner remaining on their schedule.

Big deal? Oh yes, when you consider that St. Edward has only TEN players on their 6-Man football team and has gone 1-4 thus far in 2018.