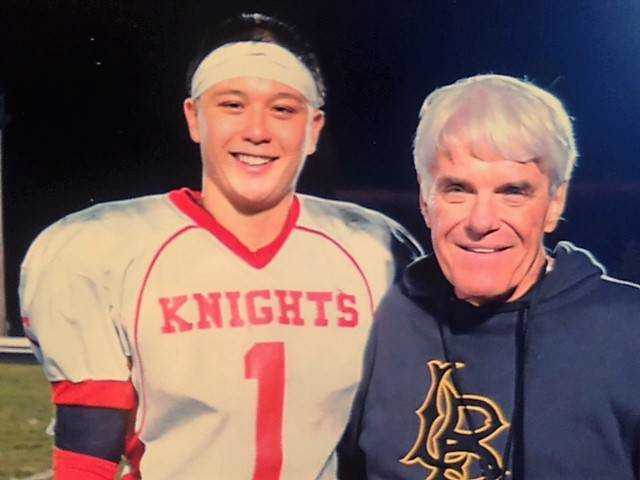 I saved the best for last! Today, we lead off with a young man that I consider to be one of the finest running backs I’ve seen in a long, long time. Besides being a magnificent runner on the gridiron and on the track, Dylan Kautz of Norfolk Catholic is definitely a rare breed of athlete that only comes along once in a lifetime for people who love the sport of high school football

Read about Dylan’s incredible milestone below. Couldn’t happen to a better person and I’m sure he would be the first to credit his offensive line.

Dylan now becomes only the 5th player in Nebraska high school football history to rush for a 1000 yards in each of his 4 varsity football seasons. His career rushing total now stands at 5,915 yards, #11 on the All-Time list. Kautz has run for 65 touchdowns thus far in his illustrious career at Norfolk Catholic.

Last season, Kautz, the fastest schoolboy in Nebraska, ran for 2,410 yards as a junior. To become the most prolific 11-Man running back in history, Dylan would need to rush for 2,634 yards this season. That would place him one yard ahead of former Omaha North back, Calvin Strong, who sprinted for 7,476 yards during his career.

Kautz would be third on the Career Rushing List, trailing only 8-Man players Steven Dent of Mullen (7,903) and Cory Eikmeier of Dodge (8,330). Right now Eikmeier’s record of 8,330 career yards appears untouchable, but I’ve been around too long and done this for too many years to believe any record is untouchable..

*Eli Vedral, David Lilly - Wahoo Neumann - The 6-0, 170 pound Vedral came up with a huge game in the Cavaliers 29-22, come from behind win over previously unbeaten Columbus Lakeview. Eli rushed 15 times for 102 yards and broke loose for a sparkling 66 yard TD dash. The Neumann QB also completed 6 of 10 passes for 90 yards, which included a short 3 yard touchdown toss to junior Trey Miller. Vedral was also a standout on defense for Coach Tim Turman, making 12 tackles in the contest.

As for David Lilly? All he did was score what proved to be the winning touchdown from 10 yards out with 5:49 left in the game. Wahoo Neumann is currently 5-0 on the season and rated #3 in Class C-1 behind #2 Pierce and powerhouse #1 Aurora.

*Jerod Epperson - Omaha Skutt - What a football player, man! The SkyHawk senior rushed for 155 yards on just 11 carries and touchdown runs 3, 60 and 58 yards in Skutt’s 48-3 romp over Plattsmouth. Jerod Epperson unofficially has 792 yards and 15 touchdowns for Class B’s #1 football team. Simply one of the best in the state.

*Jaylon Roussell - Omaha Burke - 6-1, 180 pound junior turned in the biggest performance of his career with his 151 yards rushing on just 15 carries in Burke’s 51-7 win over Elkhorn. Roussell hit the endzone with red zone runs of 8, 2 and 7 yards. Jaylon has run for 416 yards this season and carries an average of 7.8 yards everytime he touches the football. This dude is the real deal, as demonstrated by his 114 yards on just 11 totes against a good Millard West defense earlier in the season.

Bulldog quarterback Tyler Chadwick was very efficient in the game, hitting 8 of 11 passes for 110 yards and two touchdowns. Xavier Watts was about as efficient as it gets, grabbing both of Tyler’s scoring tosses covering 7 and 20 yards.

The Mount Michael Benedictine senior has now thrown for 901 yards and 13 TDs for the Class B 10th rated Knights.

*Cole Fossenbarger - Johnson-Brock - Slender 6-0, 150 pound QB helped make quick work of Lincoln Parkview Christian by completing 10 of 13 passes for 201 yards and 4 touchdowns in the opening half. Johnson-Brock raced to a 72-0 halftime lead, enroute to a smashing 80-0 victory over the Patriots.

All-State wide-receiver Ty Hahn caught 4 Fossenbarger aerials for 86 yards and a pair of touchdowns, Hunter Oestmann reeled in 2 receptions for 55 and a score, while Kaden Glynn made 3 catches for 37 yards, which included a 9 yard touchdown grab. Oestmann also added a 3 yard rushing touchdown in the route.

Freshman Cade Fossenbarger had two TDs in the contest, one on a 44 yard run, the other coming on a 45 yard punt return. Senior Dylan Rowe led the tackle parade with 9 stops, Seth Moerer and Ethan Brown each recorded 2 sacks, and both Fossenbarger boys, along with sophomore Kaden Glynn pirated Parkview Christian passes in the game.

*Colter Fulton - Nebraska City Lourdes - Was the hero for the Knights last Friday night in the nail biting 46-38 win over Elmwood-Murdock. The 5-9, 165 do-it-all senior completed 16 of 21 passes for 183 yards and 3 TDs. He also and added a 44 yard rushing score to boot. But that was all in a night's work for the versatile Fulton. You just haven’t heard the nail biting part of it yet.

With Lourdes and Elmwood-Murdock tied at 38 points apiece, and the clock showing 19 seconds, the Lourdes defense had to make a play. They did just that by blocking the Elmwood-Murdock punt to take over possession of the football at the “other Knights” 12 yard line.

Colter Fulton then calmly hit Anderon Aldana with a 12 yard TD pass, then came up with an interception on Elmwood-Murdock’s final play of the game, preserving the 46-38 victory.

*Kane White - Palmyra - Panthers junior ran for 2 and 8 yard touchdowns, and hauled in a pair Koby Dillon TD passes covering 13 and 10 yards in Palmyra’s 30-8 win over Omaha Brownell-Talbot. Palmyra improved to 3-1 with the win.

*Quade Myers - Dundy County/Stratton - 5-9, 150 pound Freshman is starting to heat up for the Tigers. Myers rambled for 201 yards on 17 carries and two TDs in that 54-28 win over Alma. The young quarterback also threw for 79 yards and another score, made 5 tackles, and intercepted a pass on defense, plus accumulating 267 All-Purpose yards (includes return yards)..

Keep an eye on young Quade Myers, who already has 764 of those all-purpose yards in just four games for 3-1 Dundy County/Stratton.

*Ephroen Lovato - Minatare - One of 6-Man football’s toughest runners, the 6-0, 200 pound Lovato has already accumulated 736 yards in four games for the undefeated Indians. That includes his 281 yards on 29 carries and 5 TDs in Minatare’s 74-50 win over South Platte.

Ephroen is closing in on his 3rd straight thousand yard rushing campaign for 6th rated Minatare.