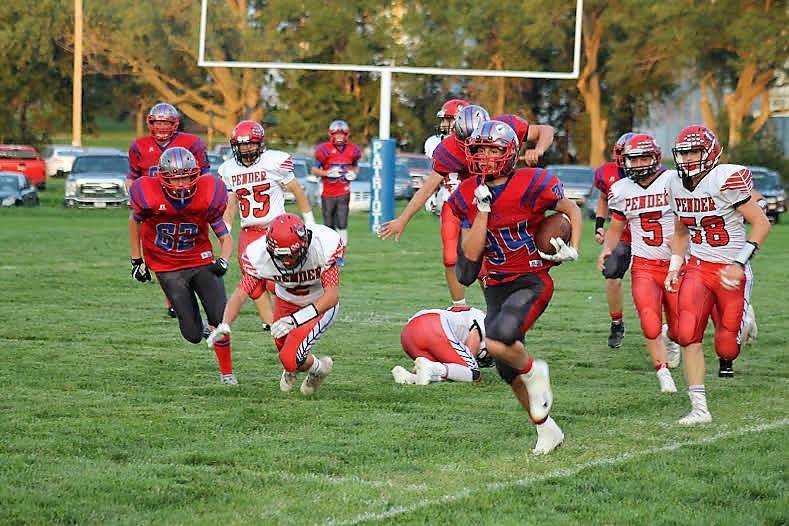 Clarkson-Leigh sophomore Tommy McEvoy (red jersey and the football) has exploded the past two for the Patriots, rushing for 601 yards and 13 TDs.*(photo courtesy of Bob McEvoy)

*Tommy McEvoy - Clarkson-Leigh - 6-2, 180 pound sophomore had tough assignments in the Patriots first two games of the season, and that task would be trying to gain some ground yards against Howells-Dodge, then Humphrey St. Francis.

Tommy McEvoy’s 88 yard game against Howells-Dodge wasn’t all that shabby, but St Frans put the clamps on the talented son of Clarkson-Leigh assistant coach Bob McEvoy, limiting the soph to just 22 yards. Things changed for Tommy the next two games…..big time.

Young McEvoy exploded for 273 yards on 16 carries and 6 TDs in Clarkson-Lehigh’s 58-38 win over Lincoln Parkview. The yards came in even bigger chunks last week when the Patriots clubbed Pender, 68-14.

Tommy made the Pendragon defense look like they were playing in slo-mo, ripping through their defense for 328 yards on 24 touches and 7 touchdowns. The high-speed McEvoy also picked off a pass in the game, turning it into a Pick Six, 66 yard trip down the Pender sidelines.

How does 601 yards and 13 TDs in two nights work grab you? Head Coach Jim Clarkson will take that any day of the week. Tommy McEvoy has now rushed for 711 yards with 14 TDs through four games for 2-2 Clarkson-Lehigh.

The Patriots, 1-0 in Class D-2, District 3 play, take a trip to the Big O this Friday to face 0-4 Omaha Christian Academy.

This youngster is a terrific athlete who owns high level football skills, especially on offense, where his yards after contact are just superb. Tommy just keeps those wheels turning, dragging defenders downfield, and often times into the end zone. Poster child for how to run the football keeping those knees high.

*D J Gross - McCook - You know what? It doesn’t get much better at McCook high school when you work your way to the top of the list for Career Tackles, especially when your position coach is the legendary Russ Schlager and your Dad (Jeff Gross) is the legendary head coach.

D J’s 5 solo tackles and 3 assists against Lexington last week, vaulted him to the top of the heap in career tackles for the McCook Bison. The All-State linebacker now has 263 career stops for the Bison, placing him ahead of former All-State crunchers, Zach Schlager (257), Trent Lyons (252), Jake Schlager (245) and Slammin’ Sam Frazier (241).

This Joe Miller dude is a fine football player, who doesn’t have a ton of help up front this season. Miller’s 5 game rushing total...1,058 yards on just 93 carries (11.4/per) and 13 TDs, and despite the constant punishment this kid takes, Joe has fumbled only one time.

*Cedric Case, Isaiah Alford - Lincoln High - Cedric, Isaiah and the boys flat out got it done in the Links 49-6 win over Omaha Central. Cedric Case, the 2017 Super-State quarterback, completed 13 of 17 passes for 149 yards and 5 touchdowns. Isaiah Alford caught a pair of those Cedric Case scoring passes (3, 2 yards). Morgan Perry III led all receivers with 3 receptions for 57 yards, plus a touchdown catch of 39 yards, while Jaden Horton (40 yard TD), and John Goodwin (6 yards) caught the other two.

Isaiah Alford carried the football only 10 times in the win, but still scooted for 183 yards with scoring gallops of 41 and 60 yards. The Links raced to a 42-0 halftime lead in the game.

*Alex Rodgers - Omaha Roncalli - Was absolutely incredible in the Crimson Pride 62-17 win over Bennington. The University of Nebraska Baseball recruit rushed for 181 yards on only 11 carries and 6 TDs. Rodgers touchdown runs were from 6, 64, 71, 1 and 38 yards away. The Roncalli sensation also caught a 22 yard scoring pass.

Roncalli Catholic QB Jack Dotzler was nearly perfect in the passing department, completing 13 of 15 for 246 yards and two touchdowns. Besides the 22 yard strike to Rodgers, Austin Niederle hauled in a 34 yard TD catch from Dotzler.

Omaha Roncalli, now 3-2 on the season, led 56-0 at the half against Bennington.

Jared, by the way, has been held under a 100 yards rushing only once in the past 13 games and has a current string of 11 hundred plus rushing games in tact. The Guardian Angels star has also reached the 3,983 career rushing mark with 64 touchdowns to date.

*Isaac Dannehl - Ralston - 6-2, 180 pound senior quarterback threw 5 passes in the Rams 28-12 win over Omaha Gross. Two went for touchdowns. Dannehl found Noah Talmage for a 17 yard scoring strike, then hit Jahrran Paces with a 22 yard TD pass. Ralston has rebounded this season to post a 4-1 record, the Rams best start since a 7-0 beginning in 2013.

*Avante Dickerson, Warrior Defense - Omaha Westside - Dickerson pirated a Reid Burke pass in the 1st quarter, turning it into a 31 yard Pick 6. The interception touchdown sparked a 37 unanswered point run by Omaha Westside. Avante would go on to rush 13 times for 75 yards and a touchdown, as Westside posted an impressive 37-2 win over long time rival Creighton Prep.

The Warrior defense was also up to the task, limiting the usually steady Junior Jay offense to 191 total yards for the contest. Omaha Westside moves to 5-0 on the season and jumps two spots to the #5 position in Stu Pospisil’s Top10/Class A ratings this week.

And there you have it, every ball carrier gets their name in lights for Lincoln East today!

*Justin White -David City High - Scored twice on short bursts of 2 and 3 yards in the Scouts 21-6 upset of Class C-2, #7 rated Shelby/Rising City. White also forced a fumble in the huge win, while defensive teammate Clayton Denker picked off a pair of Huskies aerials to keep Shelby/Rising City at bay.

The Scouts improve to 3-2 on the year.

The versatile Diaz also has 8 pass receptions for 125 yards and 3 scores, 232 yards on kick returns and logged 25 tackles on defense. Headed for a 1000 yard rushing season.