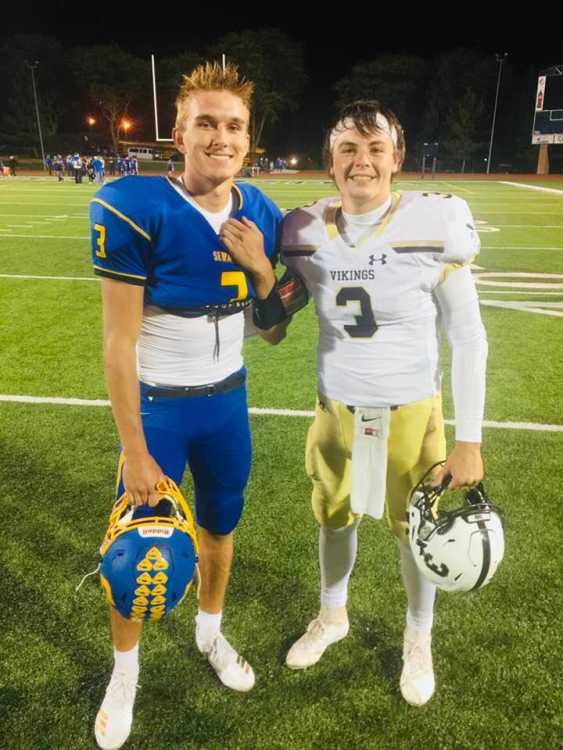 Occasionally, when the stars are aligned just right or the moon is full, there is Friday Night Lights action that will be remembered for all time. Northwest (Grand Island) and Seward locked horns last week for one of those great Nebraska high school football gems that left statisticians dizzy, defensive coaches scratching their heads, and fans breathless.

Two of the States best quarterbacks, regardless of class, went head-to-head and lit up the Seward sky with an aerial display that even made that city’s famous 4th of July celebration take a back seat.

When it was all over, Northwest’s Carter Terry and Seward’s Joseph Krause (pronounced Krau-Zee) had combined for 870 yards passing and 9 TDs, with No interceptions.

As fate would have it, the game came down to the last wild play, a crazy kick return that left Northwest fans exhaling a sigh of relief when it was over, and Seward fans falling to their knees in despair.

Needless to say, we lead off Week Five Friday Night Lights Football Heroes - Part 1 with a priceless photo and a feature on both quarterbacks, who are both as good as it gets when you speak of top notch human beings.

*Carter Terry - Northwest (Grand Island) - With his team at a crucial crossroads in the 2018 football season, the senior field general came through when it counted the most. Terry completed 33 of 46 passes for 420 yards and 4 touchdowns in the Vikings breathtaking 44-40 win over previously unbeaten Seward.

The three year GI Northwest starter had to rally his troops from a 38-28 halftime deficit to make a game of it. Not only that, but the Concordia University scoreboard clock read 3:14 remaining in the game when the ball was spotted on the Northwest ONE YARD LINE following a booming Joseph Krause punt.

The Vikings trailed Seward 40-38, and with their 1-3 record, were frankly looking at the possibility of missing the Class B playoffs with a loss. Carter Terry went to work.

The record setting son of Northwest assistant football coach Ken Terry, took the Vikings straight down the field in 16 plays before hitting Mitch Vitera with the winning 18 yard touchdown pass with just 37 seconds left in the contest.

Andrew Korte led the Northwest receiving corps with 10 receptions for 191 yards, plus TD catches of 32 and 31 yards. Sean Juengst was next with 9 receptions for 97 yards and a 37 yard TD grab. Mitch Vitera had 7 catches for 67 yards and the all important, game winning 18 yard touchdown catch.

*Joseph Krause - Seward - Bluejays sharpshooter completed 27 of 47 passes for 450 yards and 5 touchdowns in the 44-40 loss to G.I. Northwest. What some do not know, is that Krause and his buddies nearly pulled off a win on the last play of the game.

With the ball sitting at the Seward 46 yard line and 12 seconds left, Krause was forced to scramble when the Vikings had all of his receivers covered. The Seward QB then maneuvered his way to the Vikings 35 yard line, spotted RB Davon Brees with a wall of escorts and threw the ball back to the fleet Bluejay running back.

Brees and company made it all the way to the Northwest 7 yard line before Eli Arends and Tyler Hageman combined to make the game saving tackle.

*Jay Ducker - Bellevue West - Came through big for the Thunderbirds on homecoming night. The shifty junior broke loose for 189 yards on 28 carries and scored 3 touchdowns on runs of 1, 60 and 7 yards in Bellevue West’s 42-21 win over a pesky Lincoln Pius X team.

1000 yard junior wide receiver Zavier Betts was also huge in the game, catching 5 passes for 143 yards, two of which were scoring receptions covering 58 and 14 yards. QB Evan Kieser keyed a big 4th quarter scoring output, which saw the Thunderbirds entering that money quarter with only a 22-21 lead.

Kieser ended up being accurate on 16 of his 28 pass attempts for 242 yards and 3 TDs. Evan’s 3rd scoring toss of 16 yards was handled by Nate Sullivan.

Jay Ducker has now unofficially rushed for 773 yards and 14 touchdowns after 5 games. Zavier Betts sits at 492 receiving yards with 7 TDs.

*Rhett Jordan - Waverly - Senior quarterback had to be considered for Player-of-the-Game honors in the Vikings 48-16 thumping of Norris. Jordan completed 7 of 9 passes for 164 yards and a touchdown (83 yarder to Jay Adams), but really tore ‘em up on the ground with his 192 yards on just 14 carries and 4 TDs.

Rhett’s scoring runs covered 64, 60, 2 and 14 yards, his 4th hundred yard plus rushing game in 5 outings this season. It also increases his 2018 ground yards total to 685 (7 TDs). Along with his 425 passing yards, the talented Waverly product is up to 1,110 total yards and has the Vikings on a 4 game win streak after an opening night loss to Seward.

*Wyatt Ehlers, Jackson Hirschfeld - Centennial - Man, Woman, and Child, did this All-State quarterback come up big in the Broncos 28-21 win over perennial power David City Aquinas. The dead eyed Ehlers passed the Aquinas defense silly by completing 26 of 38 throws for a giant 308 yards and all four Centennial TDs.

The Broncos needed that 4th touchdown pass bad, by the way. Ehlers and company trailed the Monarchs by a single point with less than 2 minutes left in the game. A recovered fumble after a Centennial kickoff set things up deep in Aquinas territory.

Wyatt then calmly hit Jackson Hirschfeld with a 10 yard TD pass with a minute left in the contest, keeping the Broncos undefeated and number one ranked in Class C-2.

*Baily Darnell -Auburn - Senior Bulldog captain continued his torrid rushing pace in the Bulldogs 19-7 win over Ashland-Greenwood. The jet propelled Darnell zipped for 182 yards on 21 carries and scored all three Auburn TDs. Baily hit paydirt with runs of 4 and 3 yards. Darnell also had 3 pass receptions in the win, and that included a 77 yard TD pass from quarterback Drew Dixon.

The Auburn senior has now rushed for 856 yards and 12 touchdowns this season.

And….that Bulldog defense was also outstanding in the game, limiting Ashland-Greenwood to just 88 total yards. A trio of Bulldogs, Turner Arban, Branden Lavigne (all 11 solos with 4 TFL), and Tj Roybal logged 11 tackles each, while Roybal and sophomore Brody Darnell each had an interception in the game.

*Austin Jablonski - Lincoln Pius X - Terrific 6-2, 200 pound Thunderbolt QB completed 19 of 37 passes for 250 yards, plus rushed 18 times for 68 yards in the 42-21 loss to powerful Bellevue West. Jablonski’s top target in the game was Jonathan Andreasen, who snared 9 passes for 121 yards including a 69 yard TD reception. Josh Miller reeled in Austin’s other TD toss that covered 21 yards.

In my estimation, Austin Jablonski is one of the finest all-around football players in Class A. The young man has already thrown for 948 yards without the benefit of his top receiver being in there. He has also run for another 348 yards and 6 TDs and not fumbled the football one time. Not