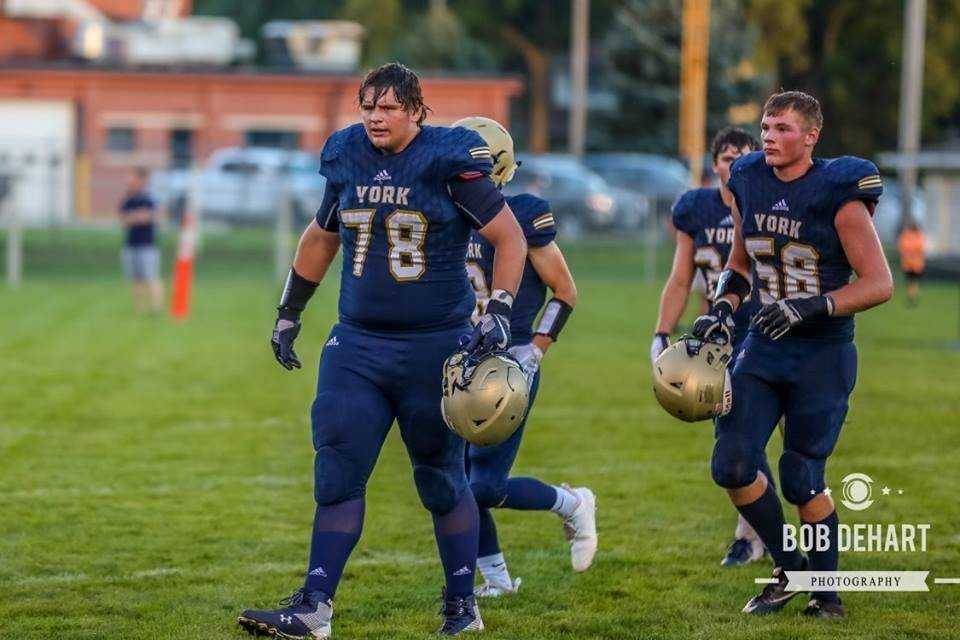 *Noah Stafursky - York - There aren’t too many human beings playing high school football in this state that cast a bigger shadow than 6-4, 320 pound Noah Stafursky. It’s no surprise the big guy is one of the best linemen in Class B on both the offensive and defensive side of the ball.

It’s not often a lineman headlines one of these Friday Night Lights Heroes blogs, but when a young man is a force on either side of the ball and is a Division One player in my mind, he’s going to be front and center.

Can anyone in the state get past big Noah when he is pass blocking? I haven’t witnessed it yet, and I’ve seen defenders try the little spin trick…..bad idea. They just lose at least a half yard in the process and give #78 that much more leverage to push them into the middle of next week. Many have also tried to win a hand fight on offense or defense, but it’s a lost battle if you are facing Noah Stafursky. The man’s technique is amazing and rarely if ever, gets flagged for holding.

The dude was also pure gold in last year’s State Championship game against Omaha Skutt. Noah was dialed in for that baby. On offense, he rolled defenders like a nickel cigar on run plays, never gave an inch on pass protection, and shed blockers right and left on his way to the Skutt quarterback.

The York standout currently has a preferred walk-on offer from Nebraska and a handful of offers from Division II schools, and I think Noah could play effectively at either offensive or defensive tackle at the next level. Stafursky is a bright kid too, plus, he keeps increasing his lower body strength, and is literally not moveable if he’s holding his ground on offense. On defense, the kid is far quicker than you think. And another thing I really like about this guy…..he’s a top notch wrestler, earning a 3rd place medal in last March at the Class B State Wrestling Championships.

York’s offense, especially this season, would not be nearly as effective without number 78’s hulking presence at left tackle. Even in the McCook loss, Noah Stafursky stood out with his crunching blocks and pass protection. This lad could be an All-State selection on either side of the ball when 2018 comes to a close. Are you going to tell him he’s not? Good luck with that.

This 3-0 Elkhorn South team is maturing quickly in the Class A ranks and is loaded for bear in the coming years, plus having one of the brightest football minds in the state in supercoach Guy Rosenberg doesn’t hurt matters either.

*Griffin Hendricks - Doniphan-Trumbull - Junior transfer from Yutan completed 11 of 16 passes for 256 yards and three scores in the Cardinals 51-12 thrashing of Hershey. Hendricks TD passes went to Ayden King (60 yards), Chris Vincent (4 yards), and Cade Sterner (47 yards). Griffin also scored a pair of rushing TDs in the win, but the hero in that department had to be 6-0, 160 pound junior Keithen Stafford, who zipped for 137 yards on just 8 carries and touchdown dashes covering 41 and 39 yards.

The interesting thing about Griffin Hendricks performance at his new school has been his ability to operate very efficiently at the quarterback position out of the shotgun formation, a set he had not been used to running at Yutan.

Doniphan-Trumbull is currently rated #8 in Class C-2 after week three.

*Baily Darnell - Auburn - Kept the sprinter’s wheels churning in the Bulldogs 35-7 victory over Milford. The fleet-footed Darnell escaped for 134 yards on just 13 totes and hit the end zone on runs of 19, 11 and 36 yards in the big win. Baily Darnell is rolling along with 467 yards after three games and his Auburn team is now rated #9 in Class C-1. The ‘Dogs have another very manageable schedule in 2018.

*Ghatin Hegge - Wausa - Absolutely was the difference in Wausa’s 60-54 overtime win over O’Neill St. Marys. The Dual-Threat QB had a hand in 5 TDs in the slugfest, including the winning score in overtime. Hegge, who runs a tough as anyone I’ve seen in 8-Man football this season, completed 12 of 22 passes for 271 yards and three touchdowns, and rushed for another 142 yards and a pair of scores on 16 carries.

All three of Ghatin’s TD passes were caught by junior Ethan Baue and covered 58, 27 and 40 yards, all coming in the 2nd half. Baue also booted two 27 yard field goals in the contest. Both Baue and Hegge also had interceptions in the wild game.

Ghatin Hegge has thrown for 708 yards and 8 TDS through three games and added 400 more yards on the ground, plus 6 touchdowns for 2-1 Wausa. This dude is a special football talent, who has accumulated 2,489 yards rushing and 2,000 yards passing as a four year starter for the Vikings. Altogether, Hegge has been responsible for 4,940 total yards and 42 TDs in his short 23 game career to date.

*Cody Carlson - Fremont - How can you be 5-6 and 150 pounds and rack up the yards like this guy does every week? How about a big offensive line, a BIG heart and absolutely no fear. In the Tigers 27-9 win over North Platte, Cody carried the mail a grueling 37 times for 246 yards. The handsome Carlson scored three times in the game, all on short runs of 9, 6 and 5 yards.

The talented Tiger back has already rushd for 575 yards and 9 TDs in Fremont’s first three games, including a 247 yards and six touchdown performance against Omaha Benson a week ago. Carlson is quickly approaching his total of 694 yards that took him 10 games to reach a year ago.

*T J Urban - Millard South - It didn’t take long for this young sophomore to catch on how to run the football at the varsity level. In the Patriots 35-10 victory over rival Millard North, young TJ Urban toted the football 18 times for 195 yards and three of Millard South’s five touchdowns. Urban’s scoring runs covered 9, 21 and 25 yards. RB Isaiah Harris also surpassed the 100 yard rushing mark in the game with his 102 yards on 18 carries and two TDs (7, 7 yards). Harris, by the way, leads Millard South in rushing in 2018 with 489 yards (5th in Class A)

*Joe Miller - Omaha Northwest - One of the tallest running backs in Class A at 6 feet, 3 inches tall (205 pounds), Joe Miller can flat pick ‘em up and lay ’em down when he gets the ball in his hands, man. Miller’s long striding legs lifted him to a 300 yards on 30 carries performance in the Huskies 24-8 win over Bellevue East. The senior scored all three Omaha Northwest touchdowns in the game on runs of 3, 45 and 59 yards.

Miller also caught three passes for 32 yards in the win for the Huskies, now 2-1 on the season. You know what, this Joe Miller is a really nice looking running back that is a threat to catch a pass out of the backfield as well. Put this guy in a Bellevue West or Omaha Burke backfield and he’s easily a thousand yard rusher. Joe Miller runs with reckless abandon and is faster than a sneeze through a screen door.

*Will Fehringer - Bloomfield - Another little dude, man. The 5-6, 155 pound Fehringer took off for 147 yards on 16 carries and two TDs in Bloomfield’s dominating 52-14 win over previously unbeaten Stuart. Will’s touchdown runs actually came on back-to-back totes, on successive possessions. The Bees runner has accumulated 357 yards on 39 carries and 8 TDs through 3 games in 2018.

And, hats of to that Bloomfield defense for holding Stuart’s thousand yard passer Ethan Sattler to an 8 for 20, 163 yard outing. The Bees remain rated #6 in Class D-2 this week, a bye week for Bloomfield.

*Austin Endorf - North Bend - The German Rifle kept up his torrid aerial show by hitting 16 of 22 passes for 189 yards and two touchdowns in a 37-13 win over Stanton. Austin’s touchdown passes were handled by sophomore Breckin Peters and steady senior John Emanuel. To date, the North Bend Central junior QB has thrown 98 passes, completed 61 for 850 yards, 9 TDS and 3 INTS.

Endorf averages around 14 yards per completion, so some of his pass receptions are short passes that talented receivers turn into long gains with some nifty running after the catch. And the German Rifle thing? I think the name Endorf may be of German heritage, and they used to call Philadelphia Eagles QB Ron Jaworski the “Polish Rifle”, so I thought maybe Endorf - German Rifle……...oh well, it sounded good at the time.

*Alex Patrick - Perkins County - 6-0, 170 pound RB scooted for 232 yards on 25 carries and scoring runs of 14, 59 and 54 yards in a 60-38 loss to Hitchcock County. Patrick, who rolled for 945 yards a year ago for the Plainsmen, is one of 8-Man footballs leading rushers this season. In just three weeks, Alex has bolted for 621 yards (7 TDs), including 532 the past two games. The dude has also not fumbled the football one single time in 64 carries and has made 23 stops on defense for Perkins County in Grant.